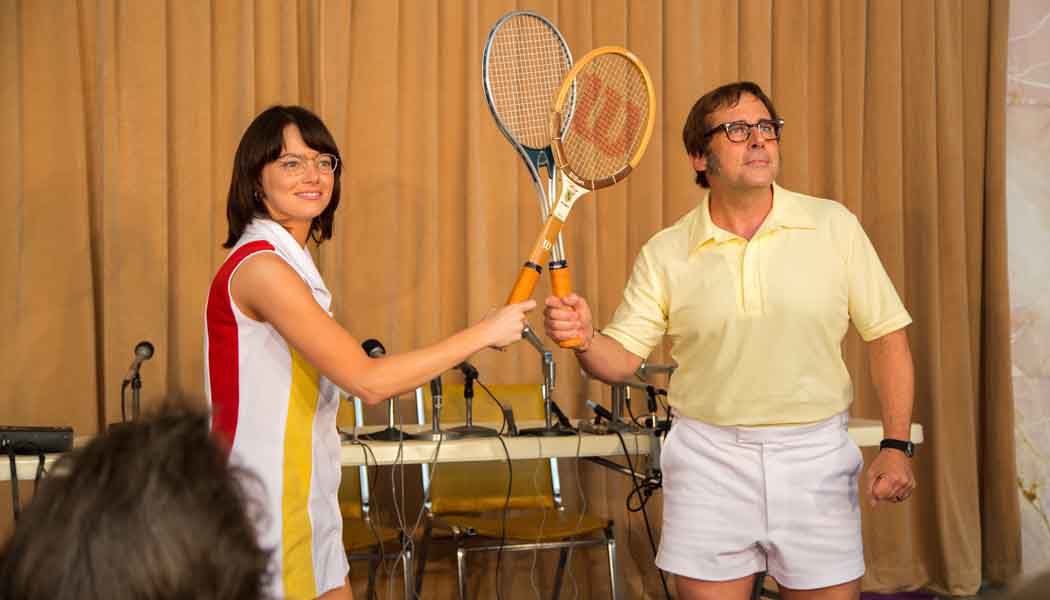 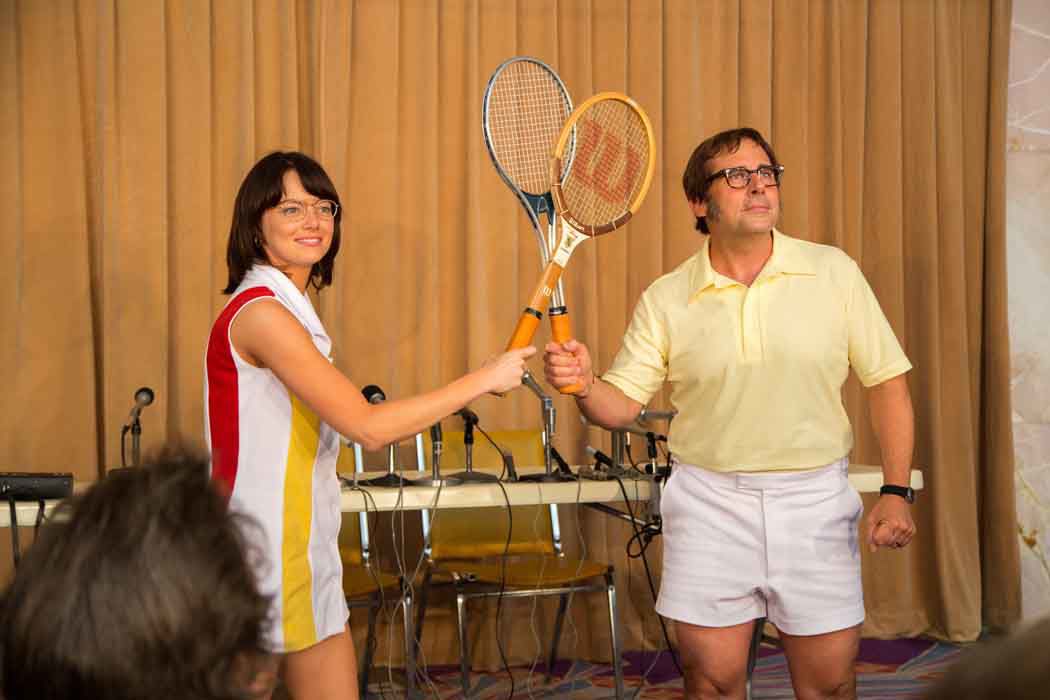 In 1973, tennis stars Billie Jean King and Bobby Riggs squared off in a televised match that was known as the “Battle of the Sexes.” That historic event — and the hoopla and hysteria that surrounded it — forms the basis for the same-named Battle of the Sexes, a highly engaging film that frequently keeps a light touch even as it tackles weighty subjects.

At the time, Billie Jean King (played by Emma Stone) was 29 and doing everything in her power to push for women’s rights, particularly when it came to the acceptance of female tennis players. Naturally, the MRAs of the day fought against this, and they found a figurehead of sorts in 55-year-old Bobby Riggs (Steve Carell), who claimed that he could beat any female player in the world. Realizing it was just a publicity stunt, King declined to participate, but once Riggs made short work of top-ranked Margaret Court (Jessica McNamee), King had no choice but to accept the challenge.

The most surprising aspect regarding Battle of the Sexes is the relative sympathy it displays toward Riggs. As King herself notes, he’s just a clown (indeed, the two later became good friends), and his actions are depicted not so much as the result of some deep-seated chauvinism but rather because he realizes that, as an aged and over-the-hill player, this is his best opportunity to get back into the spotlight. Carell does a fine job of conveying both Riggs’ outward obnoxiousness and inner angst, while directors Jonathan Dayton and Valerie Faris and Oscar-winning scripter Simon Beaufoy (Slumdog Millionaire) are content to allow Bill Pullman to provide the villainy as sexist tennis head Jack Kramer.

As Billie Jean King, Stone delivers a remarkable performance, an amazing about-face from her Oscar-winning turn in last year’s La La Land. She nails all aspects of the role, from her professional rivalry with Riggs to her personal relationships with husband Larry King (Austin Stowell) and Marilyn Barnett (Andrea Riseborough), the latter responsible for allowing King to finally acknowledge — and act upon — her long-dormant lesbianism.

It’s fitting that one of King’s sponsors was Virginia Slims, known for the slogan, “You’ve come a long way, baby.” The veracity of that statement is up for debate in 2017 when reptilian Republican politicians continue to clamp down on women’s rights and a repellent chauvinist pig (and, lest we forget, accused rapist) occupies the White House. Fortunately, movies like Battle of the Sexes exist to continue to show the way toward a better tomorrow.

WHEW, that was close. Just when it seemed as if we had lost Tom Cruise to the ranks of paycheck-cashing automatons no longer interested in applying themselves on screen (see: Anthony Hopkins, Nicolas Cage), along comes American Made to show there’s still some life left in the maverick actor. After the ego-boosting but audience-snoozing duo of The Mummy and Jack Reacher: Never Go Back, there were certainly no guarantees.

A caffeinated Cruise storms his way through this fact-based yarn focusing on Barry Seal, a TWA pilot who’s recruited by the CIA (repped by Domhnall Gleeson as cheerful agent Monty Schafer) to partake in reconnaissance runs over Central American rebel camps. This leads to Barry also working with Panamanian General Manuel Noriega, the Medellin drug cartel in Colombia, and, finally, the unlawful and hypocritical Reagan White House (there’s newsreel footage of Ronnie predictably ignoring Iran-Contra questions to gurgle over his Thanksgiving turkey). Over the course of his escapades, Barry remains committed to his wife Lucy (Sarah Wright), contends with her reckless brother JB (Caleb Landry Jones), and makes so much money that he has to eventually start burying some of it in the backyard of his home in Mena, Arkansas.

Director Doug Liman (who previously worked with Cruise on the excellent Edge of Tomorrow) and scripter Gary Spinelli clearly have plenty of affection — perhaps too much — for Barry Seal, who’s presented as a likable guy who never really hurt anybody. Considering he routinely flew cocaine into the U.S. makes that a highly dubious outlook, but regardless, Cruise plays him as such an eager-to-please opportunist that we enjoy watching him even if we never really care about his fate. At any rate, he’s definitely preferable to monsters like Pablo Escobar and Oliver North, and the picture does a nice job of illustrating that he’s really just a pawn in the games played by amoralists with only their own self-interests at heart. Ultimately, American Made examines where capitalism and corruption intersect, and, in that respect, the movie is aptly named.