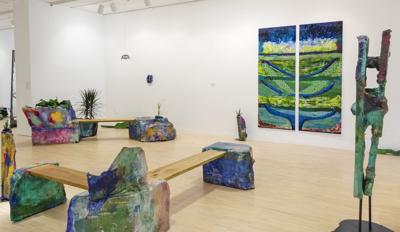 Timeshare, a timely and satirical multi-media exhibition created by Jillian Mayer, will open July 15 in the Potter Gallery at SECCA (Southeastern Center for Contemporary Art), 750 Marguerite Drive, Winston-Salem. There will be an opening reception from 5 pm – 8 pm, with the artist in attendance. Admission is free, with a suggested donation of $10.

It could be said that the inspiration for Timeshare was torn from today's – and, indeed, yesterday's – headlines about the dire effects of climate change upon the planet Earth. Taking into account the increasing number of “prepper” and survivalist sub-cultures proliferating in the wake of global climate change, Mayer's combination of fiberglass sculptures, ceramic forms, and paintings collectively point to the harsh reality that time is running out in the context of environmental and infra-structural devastation.

Nevertheless, this speculative and highly satirical exhibition tempers that assessment in predicting how mankind will adapt to, and even take advantage, of the situation. It posits theories on how humans might discover new ways to adapt to the natural world, exploring how art can become functional in times of disaster or when Earth becomes uninhabitable.

Throughout her career, artist/filmmaker Mayer has depicted how technology affects people's lives, bodies, and very identities by exploring how our physical world are shaped by our participation in a digital landscape. By delving into the points of tension between our on-line and physical worlds, her work aspires to exist in the tentative, tenuous boundary between them. Her work has a consistent thread of modeling how to subvert capital-driven modes of technological innovation.

Born and still based in Miami, Mayer is a graduate of Florida International University (FIU), the largest university in South Florida. In 2010 she was tapped by Miami Light Project's 2010 “Here and Now” theater festival to create a short. The result was the musical satire Mrs. Ms., in which she plays herself and wants to marry her pet Chihuahua. Her film debut, the 2010 short Scenic Jogging, was shown at New York's Guggenheim Museum as part of the YouTubePlay program.

Her subsequent short films, many made in collaboration with Lucas Leyva, include I Am Your Grandma (2011); The Life and Freaky Times of Uncle Luke (also '11), which starred hip-hop icon and 2 Live Crew leader Luther Campbell in the title role; Jacuzzi Boys: Glazin (also '11), #PostModem and Adventures of Christopher Bosh in the Multiverse! (both 2013); and Kaiju Bunraku (2017).

Last year, she made her feature debut as one of the directors of the comedy anthology Omniboat: A Fast Boat Fantasia, which featured Campbell, Aubrey Plaza, Adam DeVine, Finn Wolfhard, Amy Seimetz, Rhea Butcher (RB), Mayer herself, and Robert Redford (as the voice of Lokia the Dolphin Monster!), and which was screened at the 2020 Sundance Film Festival.

“Jillian's bodies of work are engaging explorations of sculpture, toeing the line between fine art and functional pieces,” observed Wendy Earle, SECCA's curator of contemporary art. “Our installation is going to have several interactive spaces, and Jillian will be premiering several new works, including an outdoor sculpture in the lake on SECCA's grounds.”

Jillian Mayer: Timeshare was curated by Rachel Adams, chief curator and director of programs at the Bemis Center, and organized by the University at Buffalo Art Galleries in Buffalo, NY (Feb. 5 – May 11, 2019) and the Bemis Center for Contemporary Arts in Omaha, NE (Nov. 20, 2019 – Feb. 15, 2020).

Timeshare will remain on exhibition through Sept. 26. SECCA is open noon - 8 pm Wednesdays and Thursdays, 10 am - 5 pm Fridays and Saturdays, and 1 pm – 5 pm Sundays. SECCA is closed Mondays and Tuesdays. Admission is free.

Due to current safety precautions, masks are encouraged for vaccinated visitors and required for others while indoors. Masks are not required outdoors.