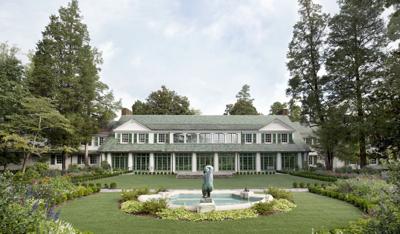 Although its full name is the Reynolda House of American Art, one need only say “Reynolda House,” and there’s scarcely anyone in the state, much less Winston-Salem, who wouldn’t know what historical landmark was being referred to.

For more than 50 years, Reynolda House has been home to one of the most remarkable art collections ever assembled, displayed within the original 1917 interiors of the country manor of R.J. and Katharine Reynolds. The collection boasts works by such esteemed American artists as Georgia O’Keeffe, Frederic Edwin Church, Alexander Calder, Romare Bearden, Stuart Davis, Martin Johnson Heade, Lee Krasner, and Jacob Lawrence, among many others.

Located at 2250 Reynolda Road in Winston-Salem, Reynolda House also offers beautiful gardens, nature trails, and a waterfall at Reynolda Gardens. In addition, Reynolda House has hosted countless educational and entertainment events, holiday and seasonal celebrations, and even weddings over the years. If it’s not the crown jewel of Winston-Salem’s history, it’s certainly very high on the list.

Instead of the traditional in-person gathering for Celebrate Reynolda, this year’s event will showcase a series of musical theater performances inspired by the works included in Reynolda House’s collection, as performed by noted alumni of the University of North Carolina School of the Arts (UNCSA) and Broadway actors. The presentation will include highlights from such classic productions as Ragtime, The Secret Garden, Sound of Music, and Man of La Mancha.

Tickets are $50 and can be purchased here: https://www.reynoldahouse.org/content/celebrate-reynolda-2021-a-virtual-celebration.

“To my knowledge, this deep and well-thought-out experience is unique and hopefully will not only inspire lots of people to want to learn more about Reynolda (House), but they will also appreciate the experiences that they will be able to view,” said Lynn Eisenberg, a Reynolda House board member and co-chair of this event.

This year’s “Celebrate Reynolda” event was conceived by Greg Walter, the event’s musical and creative adviser, as well as assistant dean for external affairs, professional development, and alumni School of Drama, UNCSA, and Eisenberg. Among the UNCSA graduates who appear in the presentation are Isaac Cole Powell (School of Drama’ 17), who earned a Drama League Award nomination for his portrayal of Tony in the 2020 Broadway revival of West Side Story and will make his big-screen bow in the Universal’s upcoming screen version of the 2015 stage musical Dear Evan Hansen opposite Julianne Moore and Amy Adams, as well as appearing in the second season of the Amazon Studios anthology series Modern Love opposite Anna Paquin, Minnie Driver, and Miranda Richardson.

Funds raised will support the museum’s ongoing educational mission to provide art, learning, and nature to all Reynolda House visitors by providing free admission to more than one-third of its annual visitors, including students and children under 18, as well as offering free public education programs to all ages in support of reading, literacy, and arts education.

“Over the past year, our staff has learned how to pivot remarkably and meet our audience where they are,” said Allison Perkins, executive director of Reynolda House and Wake Forest associate provost for Reynolda House Museum of American Art and Reynolda Gardens. “This year’s virtual fundraiser allows us to use the integration that’s at the core of our identity to inspire others to connect with Reynolda in new ways so that we can continue to offer rich educational experiences and enhance our accessibility.”

Currently, the featured exhibition at Reynolda House is Cross-Pollination: Heade, Cole, Church, and Our Contemporary Moment, which opened in February in the Mary and Charlie Babcock Wing Gallery and is scheduled to run through May 21 of this year.