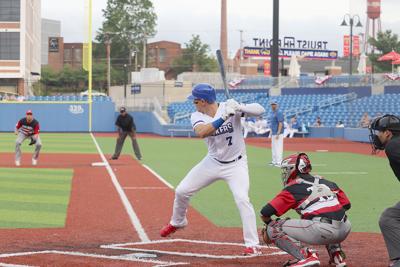 Rockers first baseman off to Cincinnati

HIGH POINT, N.C. – High Point Rockers first baseman Logan Morrion had his contract purchased by the Cincinnati Reds on Thursday and will be joining the organization in the near future.

Morrison was hitting .390 with three home runs and nine RBIs through High Point’s first nine games of the season.  Morrison was tied for fifth in the Atlantic League in home runs, ranked sixth in slugging percentage (.741) and seventh in On-base plus slugging (OPS) at 1.226.

Morrison is a veteran of 11 Major League seasons with Florida/Miami, Seattle, Tampa Bay, Minnesota, Philadelphia and Milwaukee.  He hit a career-high 38 home runs in 2017 to tie for fifth in the American League while hitting the third-most homers in Tampa history.

Morrison is the ninth Rocker to have his purchased this season and seventh to join a Major League organization.

The Rockers are off to a 7-4 start and currently share first place in the Atlantic League’s South Division along with Lexington, Ky.

High Point Baseball, aka the High Point Rockers, began their inaugural season in the Atlantic League in 2019 with their home opener on May 2, in a brand new approximately $36M downtown ballpark, Truist Point, originally named BB&T Point.  Enhancing the rich baseball history in North Carolina, High Point Baseball is part of the fastest growing family sport in America.  High Point Baseball is committed to providing superior customer service and quality, affordable family entertainment experiences for the Triad of North Carolina.  With seven players having their contract purchased and earning the 2019 Ballpark of the Year as well as Mascot of the Year (HYPE, The Rocking Horse), the High Point Rockers have built a fun and competitive atmosphere in both High Point and the Atlantic League.

The ALPB is a Partner League of Major League Baseball, a player gateway to the major leagues, and a leader in baseball innovation.  Through its partnership with MLB, the Atlantic League tests Major League Baseball rules and equipment and collaborates on marketing and technology initiatives.  The Atlantic League has sent over 950 players to MLB organizations while drawing more than 42 million fans to its affordable, family-friendly ballparks throughout its 24-year history.  For more information, please visit www.AtlanticLeague.com.