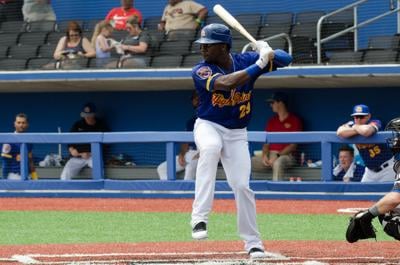 High Point, N.C.- Jared Mitchell, who joined the High Point Rockers in the second half of the 2019 season, has signed for 2020. He brought power, speed, and exciting outfield play to High Point as the team made its playoff push last year.

Mitchell showed tremendous range both in the outfield and at the plate. In addition to playing right and center field for the Rockers (he also played left field in Sugar Land), Manager Jamie Keefe was also able to insert him virtually anywhere in the lineup. When asked about the all-around ability of the outfielder, Keefe acknowledged as much, while also mentioning a trait not to be forgotten: “Jared’s athleticism is off the charts. Defensively, he can play all three outfield positions. Offensively he can hit 1 through 9 and be productive in every spot. But more importantly, he is a great person and teammate.”

On September 13, 2019, with the Rockers seeking a playoff berth and facing the Somerset Patriots at home, Mitchell had his finest evening to date in a Rockers’ uniform. He blasted a pair of home runs and stole a base to secure a much needed victory. He nearly matched the feat on the season’s final day against Long Island, homering and stealing a base as part of a 2-for-4 effort that also included a double, although the Rockers would go on to lose in extra innings.

A former first round pick of the Chicago White Sox in 2009, Mitchell’s experience on the biggest of stages began before that. A 2-sport athlete at LSU, Mitchell hauled in 13 catches for a Tigers football team that won the National Championship in 2007. On the diamond, he was named the 2009 College World Series Most Outstanding Player, after batting .347 with 2 HR and 7 RBI in six games.

With eight teams in the Mid-Atlantic and Texas, the ALPB is a leader in baseball innovation and a player gateway to Major League Baseball. Through its exclusive partnership with MLB, the Atlantic League tests Major League Baseball rules and equipment initiatives. The Atlantic League has sent more than 950 players to MLB organizations while drawing more than 42 million fans to its affordable, family-friendly ballparks throughout its 23-year history. For more information, please visit www.AtlanticLeague.com