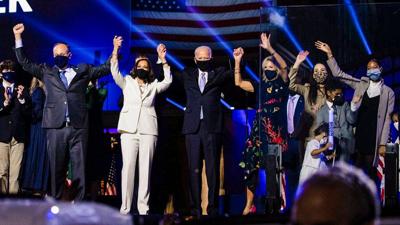 Soon after the polls closed, I emailed YES! Weekly publisher Charles Womack and editor Katie Murawski to let them know I would not be turning in a column for this week’s paper. For one thing, I wanted to write about how our state performed on Election Day, but since military and overseas ballots won’t even be processed until after Nov. 12, such a column would be premature.

Second, I was burned out from a year of writing about politics. Then, as I settled in to watch what turned out to be five days of election coverage on CNN and FOX, I became increasingly incensed by claims from Donald Trump that "they are trying to steal the election."

I wasn’t just angry because Trump lied, because he’s been lying about everything for four years. I was angry because he insulted the memory of my late mother, and no matter how burned out I was, I couldn’t let that insult pass.

My parents were dyed-in-the-wool Republicans, and not just as voters, but as volunteers. From the 1950s through the 1970s, mom served in a number of capacities, including as an election “judge.” Along with her Democrat counterpart, mom made sure folks were voting in the correct precinct, observed proceedings throughout the day, and then helped tabulate votes by hand when the polls closed. She would leave the house before 6 a.m. and return home way after dark, exhausted from a long day of service.

Last week, cable news outlets frequently showed live video of poll workers, tabulators, and observers from around the country toiling tirelessly, just as my mom had done six decades before. I could see the fatigue in their faces, but I could also see the resolve. And for volunteers in Arizona, Georgia, Nevada, and Pennsylvania, that fatigue and resolve didn’t let up for five straight days.

It was no secret that more Republicans voted on Election Day, and more Democrats voted by mail; thus, Trump looked strong in the early returns, then faded as the days wore on. In fact, he wanted it that way. He told his supporters to show up and vote in person, and when they followed his orders, he thought he was being cheated. The question is, cheated by whom?

Over and over again, Trump said and tweeted,

They are trying to steal the election

Of course, he had no proof, but liars never do. He said that Republicans were not allowed inside while votes were being counted, and that was another lie. In every processing center throughout the country, Republicans worked side-by-side with Democrats to count, supervise, and observe.

At one point, FOX host Dana Perino commented that Republicans were not being allowed inside the Philadelphia tabulation center, only to be rebuffed by her own correspondent, Eric Shawn, who said:

“That’s not true. It’s just not true. Republicans have been in this room exactly where they’re supposed to be, alongside Democrats. The claims from the president and the Trump campaign are not true. It is false.”

Nevertheless, the Trump narrative was repeated on social media, along with other baseless conspiracy theories. My favorite one was when Trump appeared at a White House press briefing and said:

“In one city, a water pipe broke, and all vote counting stopped for four hours, and bad things happened.”

Newsflash Donald, the volunteers who counted votes didn’t cheat, they didn’t destroy ballots, and they didn’t steal anything from you. Like my mom, all they did was make sacrifices to ensure that democracy works. I don’t know about any water pipe breaking, but I do know that bad things have been happening, and I know who’s responsible. That’s why I’m looking forward to Jan. 20, 2021.