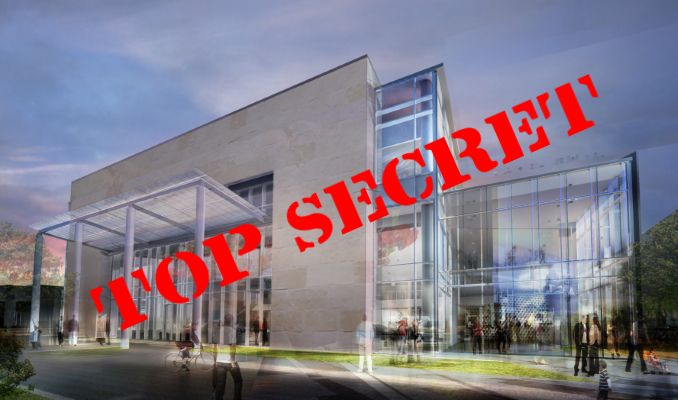 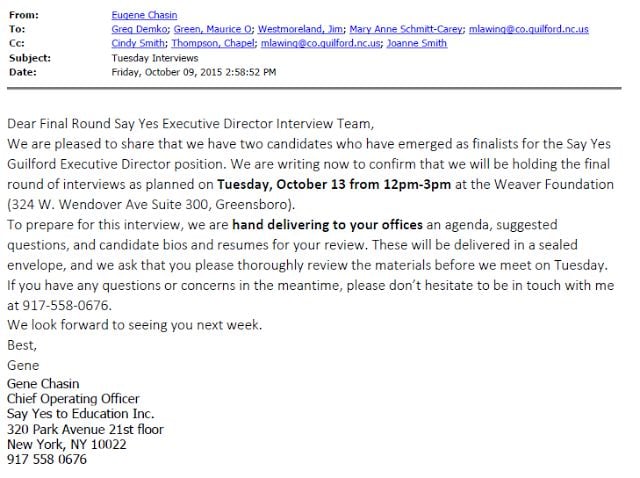 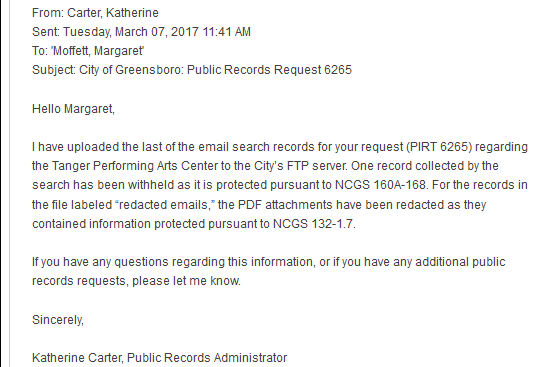 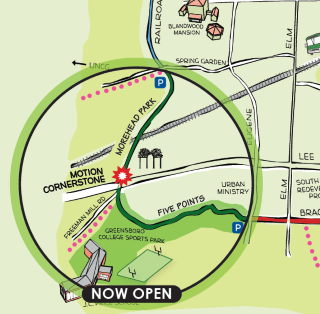 The recent news regarding several of Greensboro’s public-private partnerships has been disheartening.

Greensboro’s Tanger Center for Performing Arts has been delayed by years and is currently $18 million over budget even before ground breaking.

Say Yes to Education’s executive director resigns as the organization announces that it is not going to be able to fulfill its original promise of college scholarships for Guilford County public school students.

These failures and missteps all have one thing in common: a cloak of secrecy.

Since its inception, Greensboro’s Downtown Greenway has been promoted as being funded with a combination of public money and private donations. The extent to which private donations have contributed are murky. City records provide a level of detail for the public spending that includes payment amount, recipient and purpose. It is a different story for the private dollars where such details are kept off-limits to public inspection.

The Morehead Park section of the Greenway is the approximately 500 yard long section running north from Gate City Boulevard to Spring Garden Street. Although Action Greensboro claims a $1.2 million value for its transfer to the city, neither Action Greensboro nor Greensboro Downtown Greenway, LLC ever owned that property.

I asked Action Greensboro’s executive director Cecelia Thompson what was transferred to the city at a value of $1.2 million. She said it was “property improvements.” When I asked for specifics, she simply described them as including design, construction, public art, landscaping and easements.

Public records, however, show the City also paid for design and construction and even though Thompson said the costs of the easements were part of the $1.2 million, the easements were granted from third parties, such as Norfolk Southern Railroad to the City, not to or from Action Greensboro.

Thompson did not provide details of what constituted the $1.2 million valuation. Instead, she provided a table purporting to show how much in private money has been spent overall in eleven categories. She wrote: “It would be costly to the organization to format all of our records for this large project for public consumption and we would much rather spend our dollars on completing the project.”

When the idea for a downtown performing arts space was first floated, boosters such as then-Mayor Robbie Perkins said the cost might be around $45 million. By the time City Council approved it, the cost was $60 million and it was to be completed by the spring of 2016. Now, the cost has risen to $78 million and, according to the dogged reporting of the News & Record’s Margaret Moffett, project organizers have “backed off” of announcements of a first quarter 2019 opening.

As Moffett reported, delays have caused concerns among private donors. Although lazy local media frequently report that $38.5 million has been “raised” for the private portion of the Center’s cost, in reality, that amount includes mere pledges, and the public is not privy to details of when they will be collected.

The City Council could have made it part of the deal that the private fund raising details be public, but it did not. Instead, it put its trust in promises, even though taxpayers will be on the hook should private money come up short.

The City does, however, have control over the information about the Performing Arts Center it possesses, but it too is being unnecessarily secretive. In responding to a records request by reporter Moffett about the Center, the City refused to provide documents pertaining to the design and composition of the facility. It cited a section of state law called Sensitive Public Security Information. Passed in the months after the terror attacks of September 11th, 2001, that statute allows cities to withhold plans about preventing terrorist activity.

The City has used this law to keep secret any kind of infrastructure plan that it wants to hide. It previously cited this law to deny a citizen access to a map of the Vandalia Road project, even though the city had it posted to its website with a request for public comment.

In the case of the Tanger Performing Arts Center documents, accompanying emails indicate that the secret documents include site plans, landscaping designs, and illustrations of lighting fixtures, doors and the lobby.

Jonathan Jones is a lawyer, professor at Elon University and Director of the North Carolina Open Government Coalition. He points out the folly of withholding designs and illustrations of what will be plainly visible once the center is built. He doubts the legislature intended the anti-terrorism law to be used this way. He also said, “Just because the city thinks the law allows it to withhold records doesn’t mean it must.”

YES! Weekly’s editor Jeff Sykes asked the City’s legal department to explain how the withheld documents relate to plans to prevent terrorism. A month later, he has yet to receive a reply.

Why does the City choose to keep the public in the dark about details of its largest public-private project? The official explanation is laughable and the effect of the unnecessary secrecy on public trust is corrosive.

The hidden Say Yes to Education conflict of interest

Mary Vigue, the now-resigned director of Say Yes to Education Guilford, the scholarship organization that over-promised its ability to offer financial aid to public school students, was an assistant city manager at the City of Greensboro while she was under consideration for the job at Say Yes. The City Council, living up to its reputation as incurious dupes, approved a $1 per year lease in a City building for Say Yes at the behest of Vigue—while she was under consideration for the Say Yes job.

City Council may not have known this, but City Manager Jim Westmoreland did. He was on the Say Yes Executive Director Interview Committee. The City Manager had knowledge of the conflict and lobbied City Council in favor of the deal anyway, helping Vigue procure City facilities at no cost for an organization with which she was trying to get hired.

It took the City of Greensboro four months to provide the emails that revealed this situation and another request for information about Say Yes that might shed even more light remains unfilled by the City after eight months.

When the cost of the performing arts center climbs while design decisions are being made behind closed doors and the records that reflect those decisions are denied to the public, we are no longer citizens participating in a democracy. We are subjects of arrogant and unaccountable overlords. This is a situation ripe for malfeasance and misconduct.

Public-private projects have the potential to make Greensboro a better place. Those in charge who insist on putting details behind a veil of secrecy not only do a disservice to the public, they also unnecessarily crimp public support and foster well deserved suspicion. Private entities that lean on public money to pursue their missions should be forthcoming with complete and accurate information that explains where the money is going in detail. And complete transparency should not even be in question on the public side of things.

CORRECTION: Greensboro Downtown Greenway, LLC was organized under the management of Action Greensboro in 2007 as a for-profit entity, not in 2012 as a non-profit as originally reported. This column has been corrected. (4/16/2017; 9:23 A.M.)