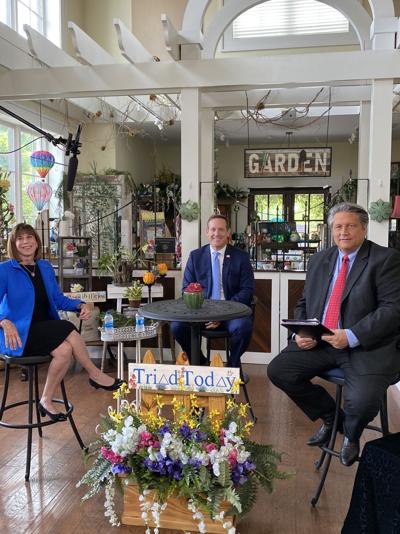 In the 2018 mid-term elections, Greensboro attorney Kathy Manning, a Democrat, challenged incumbent Republican Ted Budd, who was seeking his second term in Congress. The two candidates first appeared together on “Triad Today” in October of that year, and their interaction was, at times, contentious. Budd went on to win re-election, and Manning won her own seat two years later, representing the newly formed 6th Congressional district which encompasses all of Guilford and part of Forsyth. This weekend, the pair will once again appear jointly on “Triad Today,” but not as adversaries. This time around, the two Congressional colleagues will report on and discuss public policy initiatives that affect our nation. This special voter education edition of “Triad Today” was taped on June 2 when Budd and Manning were home on break from Washington. Here are some highlights of our 30-minute conversation.

JL: Thanks to the stimulus checks and extended unemployment benefits, millions of people are in no hurry to go back to work, and employers are having trouble finding employees. Did the government offer too much Pandemic relief, just enough? Or not enough?

KM: I think it’s important to remember that we were in a situation where we had had almost half a million deaths in this country from COVID. We had just gotten a vaccine developed, but we had no plan by the prior administration to get vaccines and get shots in arms. So I was so proud to be able to work for and vote for the American Rescue Plan, and with that plan, we’ve gotten shots in arms. We’ve gotten money to people who were not able to buy food, so people are not going hungry. It helped a lot of people.

TB: During the Trump administration in the last Congress, I think it started out being just enough, but then it became more and more, and later on we saw packages, particularly under the Biden administration, like the American Rescue Plan, ostensibly to help with COVID, but only 10% of it actually dealt with COVID. Even a smaller fraction even dealt with vaccines. Now we need to get people back into the workforce.

JL: Last year, there were 612 mass shootings in the United States. This year so far, there have been over 200 more, yet Congress still hasn’t passed a comprehensive package to curb gun violence.

What are you waiting for?

KM: I was thrilled to be able to vote for two gun safety bills that have passed the House. The first one would put in place universal background checks, and that is something that is supported by 90 percent of Americans.

TB: We want to keep firearms out of the hands of dangerous individuals, including somebody with terrorist intent, criminal intent, and right now, what we’re especially dealing with is mental illness.

JL: Let’s talk about the January insurrection. House Democrats and 39 Republicans voted to create a bipartisan commission to study what happened. Ted, you voted against the commission. Why?

TB: Because it is already being investigated by the FBI, by DOJ, and by the Washington DC police, so there’s already investigations going on, so what we want to do is de-politicize it. We don’t need a politicized commission that makes it a public spectacle.

JL: What is Congress doing to reform law enforcement?

KM: I was pleased to vote for the George Floyd Justice in Policing Act, and that Act would ban some of the atrocities like chokeholds, no-knock warrants, and it would create a national database so that a police officer fired for abusive practices in one jurisdiction, can’t be hired by another jurisdiction.

TB: I would want to support things like the Community Policing Act and make sure we invest in our police. We should never defund our police. It’s a horrible solution.