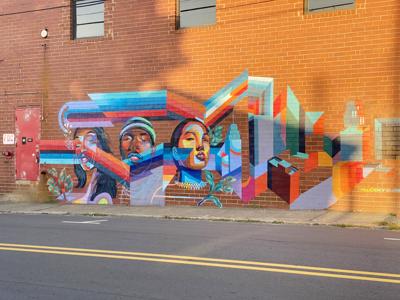 A new mural has popped up on the edge of downtown and North Winston, and it’s enough to catch the eye of drivers passing by— but the artist hopes its message will stick with them further down the road.

“We are where we belong,” said artist Georgie Nakima of her mural, “Synergy.”

“We are all here. We have something to bring forward and something positive — it gets so easy to get wrapped up in all the negative news and things that are happening, but I guess we wanted to do something that was a positive thought piece so that people could feel togetherness.”

Nakima is a Winston-Salem State University alumna who is now a mural artist based in Charlotte.

“It is really an amazing feeling because I went to school here, and the city has changed so much since I graduated in 2012. It is like a full-circle moment— starting my career here and seeing it evolve into what it is, and seeing other people embracing connectedness is really cool,” she said. “When Max and I were first coordinating, we were both very inspired by what was happening in the world right now, politically. People are charged up from the Black Lives Matter murals that have been popping up all over. A lot of people have had time to think about what is happening and how art can be a unifying tool in it, so we wanted to do something that embraced what this city is, and the personality of it.”

Mural organizers Max Dubinsky and his wife, Lauren, moved to the City of Arts and Innovation three years ago. Max is a screenwriter, editor, and now, a “local mural consultant,” and Lauren is a photographer and the head of social media at The Variable, a Winston-Salem-based creative agency.

“If you don’t live here, it can be difficult to figure out what this city looks like,” said Lauren Dubinsky of Winston-Salem.

Max said they spent the last year and a half taking pictures of places that inspired them around town. The Dubinskys then started the Instagram page, @yestowinstonsalem, and filled it with their pictures to help others moving there navigate the city more easily.

“There is so much cool stuff, so many people are moving here as Winston grows, and we wanted to create an account that viewed Winston through the eyes of outsiders to help others who might be moving here as well,” Lauren added.

After developing an online following, Max said he used that platform as a springboard to get the mural project started. During their escapades photographing the city, the Dubinskys said they were inspired by the numerous blank walls downtown to start the mural project that brought Nakima’s masterpiece to fruition.

“I saw all the blank walls, so I started calling around to business owners, and I said, ‘are you interested in a mural on the wall,’” Max said. “One of the owners here in Industry Hill responded well to it, and he said he’d actually been in contact with Georgie previously—when I saw her art, I fell in love with it and reached out.”

Max said he believes that street art is a big part of neighborhood revitalization and connecting people together.

“It’s no secret that Winston is divided between downtown and East Winston,” he said. “I think Industry Hill could be a much-needed and inclusive bridge between these two neighborhoods. You should be able to feel and see and celebrate the diversity of our city no matter where you are.”

Nakima and the Dubinskys sent out surveys to Industry Hill’s residents to get an idea of what they would want to see in a mural for their neighborhood.

“From that, I gathered what some of the shared thoughts were, and I feel like a lot of people feel the weight of gentrification,” Nakima said.  “A lot of people don’t necessarily see themselves within the growth. So, I wanted to have these three people from three different walks of life that are kind of at three different angles, but they are looking forward.”

“The breadth of my work highlights the African diaspora and the Indigenous diaspora— I like for my murals to be a visual narrative so that we see highlighted forms of people who are often seen in negative lights, that is what  the subject matter behind my work is,” she said. “It is very futuristic as in, we want to see the changes that we are imagining, but it is also inspired by the present moment and taking all those factors and coming up with something eclectic, colorful and whimsical.”

Max noted that when Nakima was working on the mural, many passers-by would stop and compliment her “showstopping” work of art.

“The amount of people who have driven by here, stopped their car and gotten out and thanked Georgie for what she is doing— it has been so amazing to see,” he said. “We knew that there was a good city response when I saw people donating and when I was knocking on doors, and that was cool and affirming. But to see the amount of people driving by every day and stop— I don’t even know how she is getting this far with the amount of people that stop to talk to her.”

Nakima said she prefers for others to interpret her work and is much more interested in what they get from it, instead of explaining it herself.

“The other day, a lady came up to me, and she was like, ‘you have these three different people who are three different ethnicities, but because they are painted in different colors, you can see how they are connected,’” she said. “I want to get people to feel that we are not just seeing our world as black and white; we are seeing it as the full array of the spectrum that it is, and people can kind of still see themselves in it no matter how they look.”

The Dubinskys and Nakima ended up raising $9,000 through grassroots fundraising efforts, and the whole process took about four months from start to finish. The mural itself only took three weeks to fully complete.

“I think it was important to get the community to buy in, and I also think that the fundraiser gave the opportunity to see this was happening,” Nakima said. “You vote with your dollar.”

“I wanted Winston to feel like it owned this mural while being a part of it from start to finish,” Max added.

“There is an opportunity for a Wynwood Walls in Winston,” said Max of the outdoor museum in Miami that has become a popular destination for artists. “There is still so much empty space in town— private and public— to invite artists to come and paint on.”

Max said that there is already amazing street art in Winston-Salem, but in his opinion, it is too spread out, making it hidden to tourists.

“If you are not a local, I feel like you don’t see it when you arrive— you really have to seek it out,” he added. “I am speaking as someone who arrived here, and it took me a long time to actually find the art— you should not be able to miss it in the city that calls itself ‘The City of Arts and Innovation.’”

“The project is for the city to live up to its name, “ Nakima added. “There are some amazing things happening in the midst of all the chaos like I was saying, we want to continue to have more opportunities for artists to express and for creative people, in general, to come together and paint the city.”

Max said the next mural is still to be determined, but he said they already have some artists in mind.

“We are actively looking for partnerships for future projects,” Nakima added.

“I think the goal would be to have other property owners to contact me,” Max said.  “There’s so much work that goes into a successful mural behind the scenes from fundraising to surveying the neighborhood to problem-solving certain unexpected issues like locating scaffolding or re-directing traffic. And most importantly, making sure the artist feels welcomed and supported. Now that we know about these things, the next one will happen faster and be even more successful."

Check out more of Georgie Nakima’s artwork on Instagram, @gardenofjourney and on her website. “Synergy” is now on display at 901 N. Trade St. in Winston-Salem. Check out Max and Lauren Dubinsky’s Instagram account, @yestowinstonsalem for more information about their mural project and to see some of their photography of the City of Arts and Innovation.