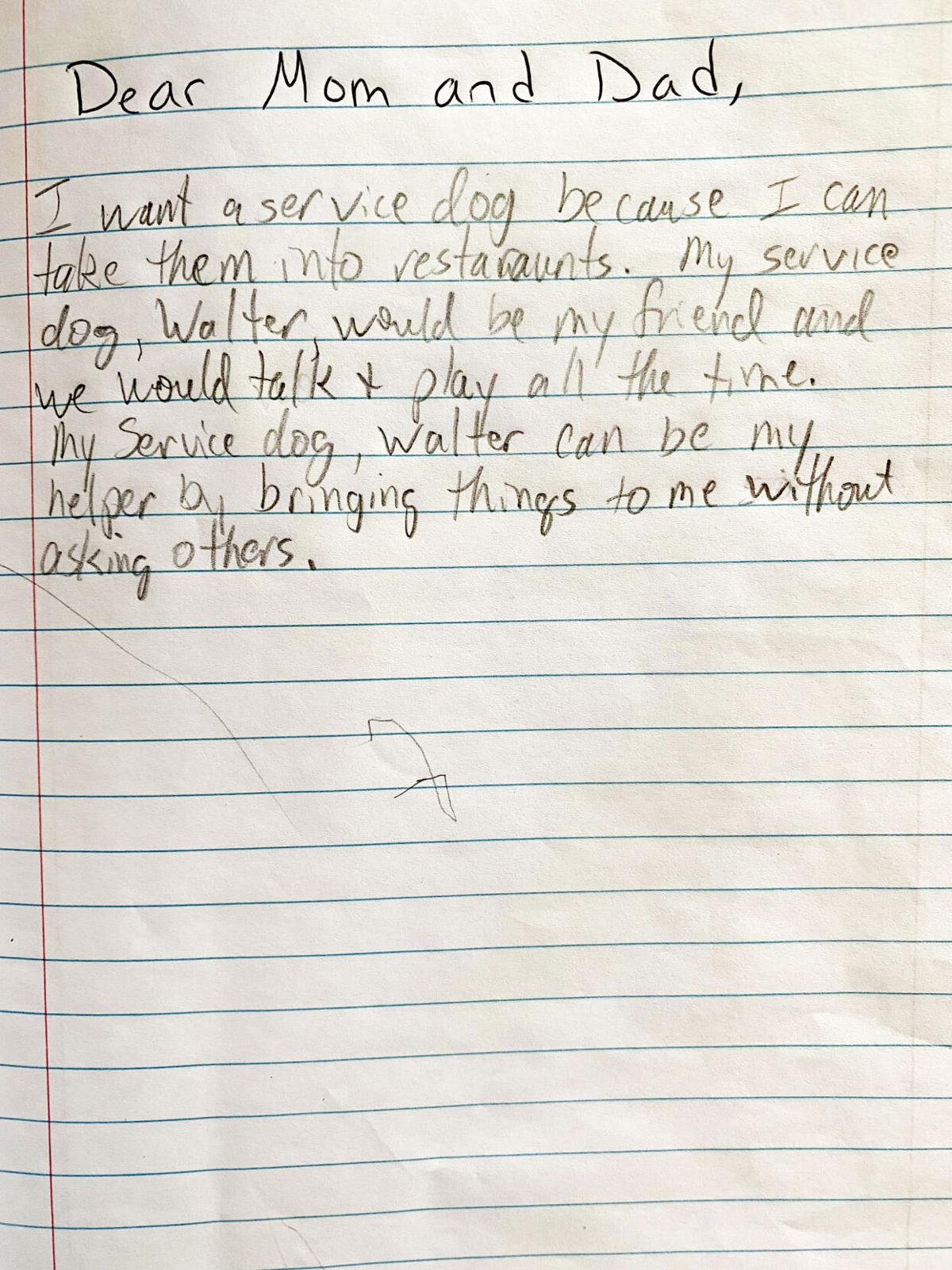 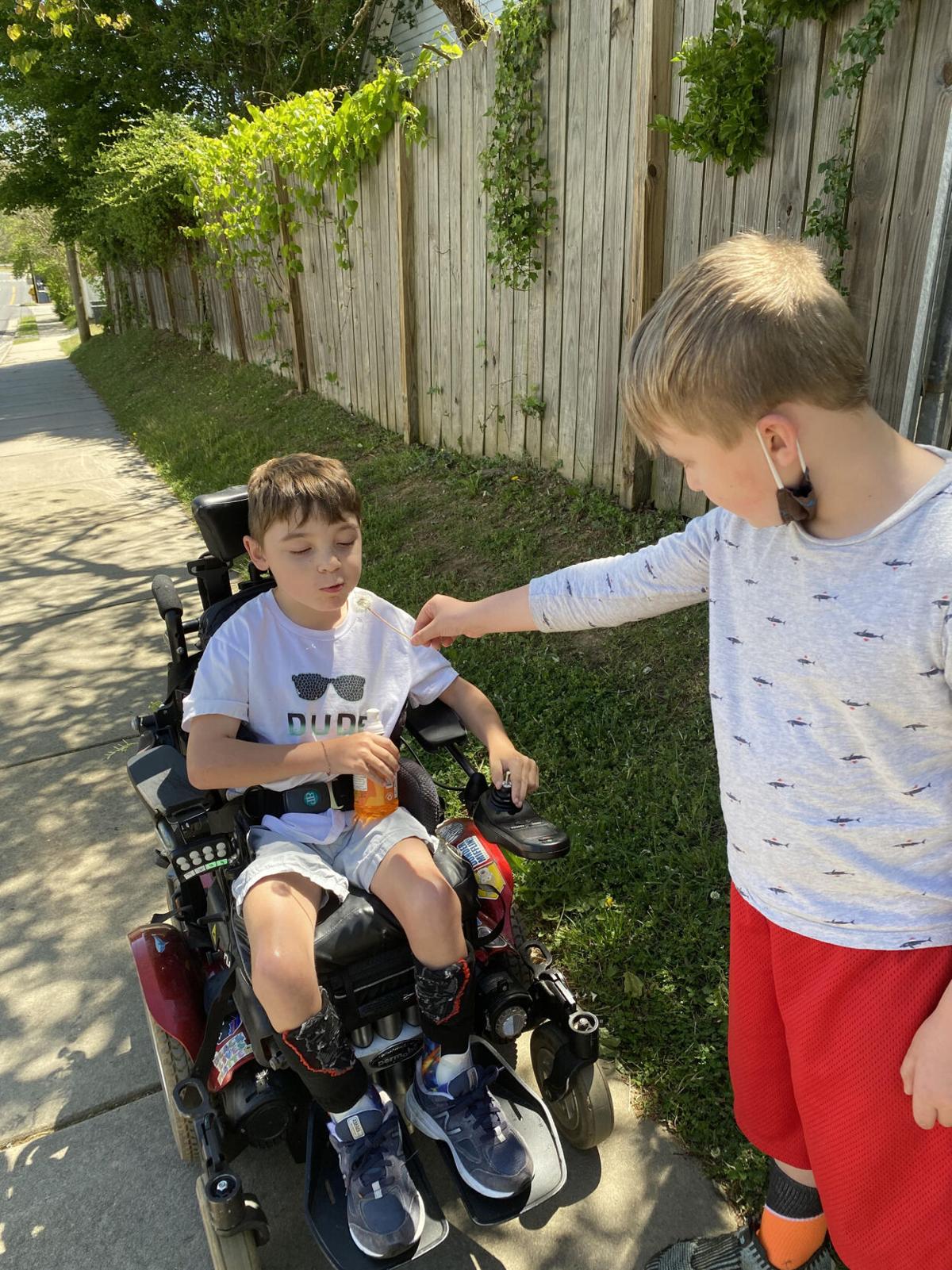 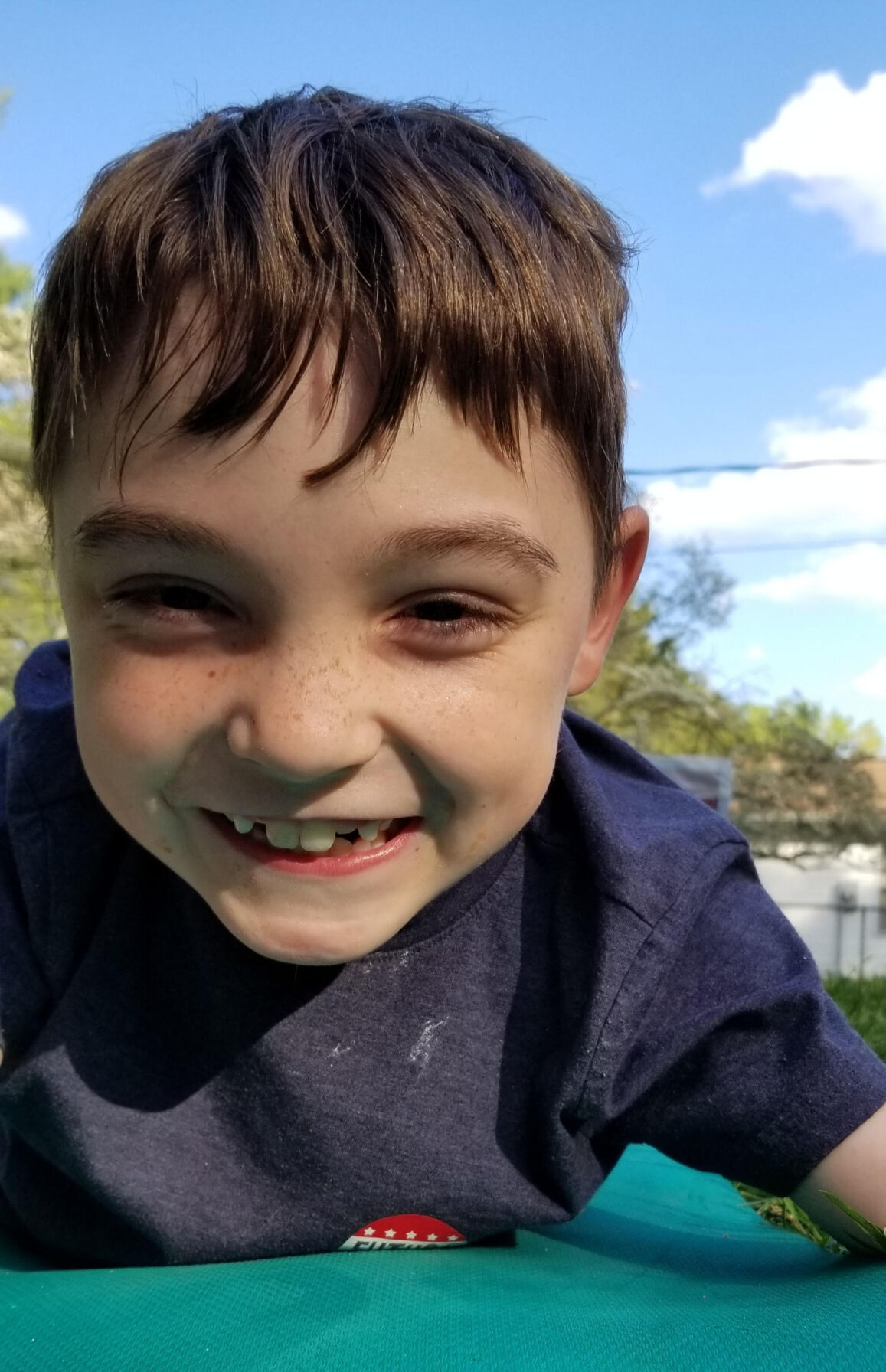 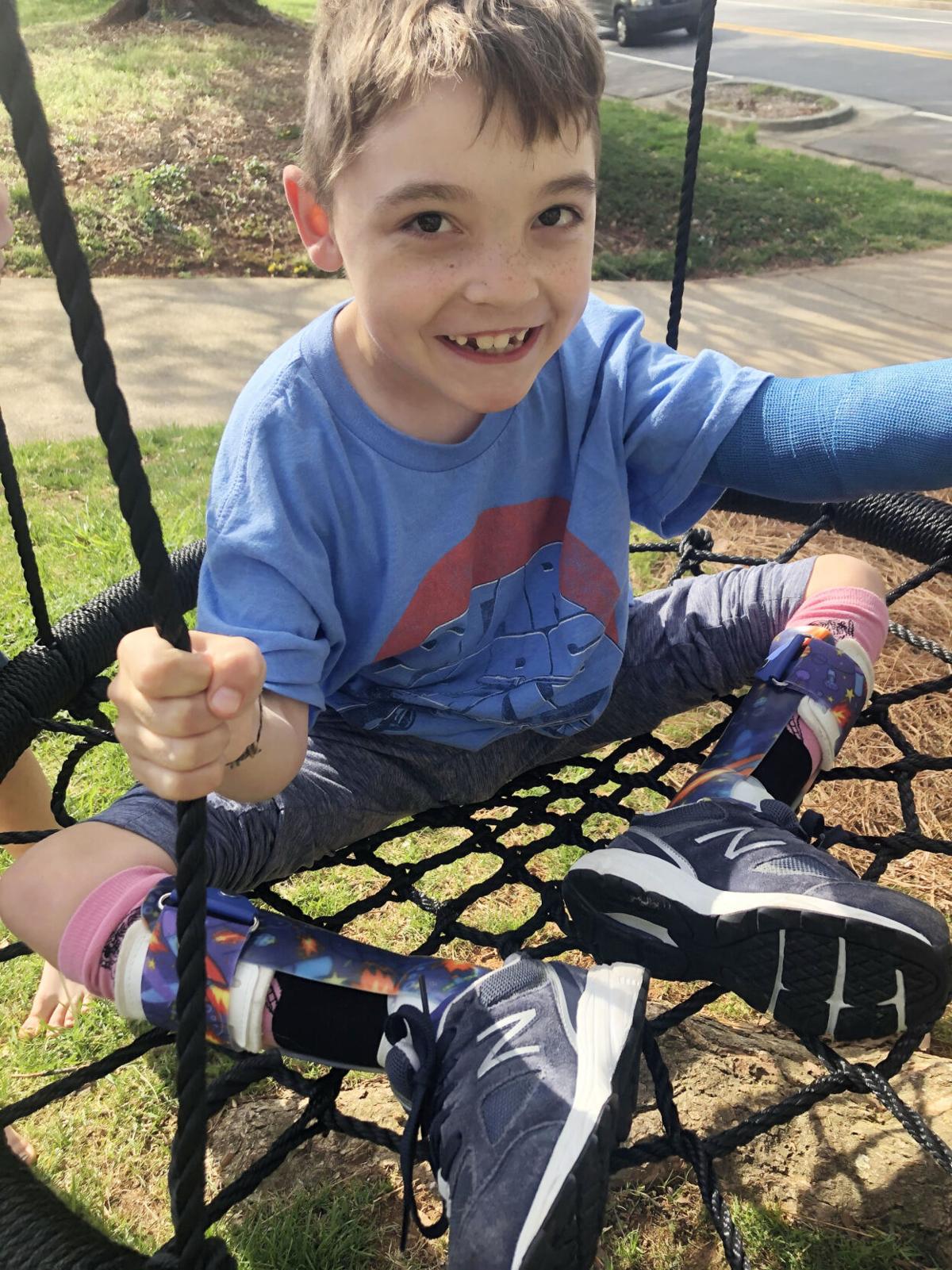 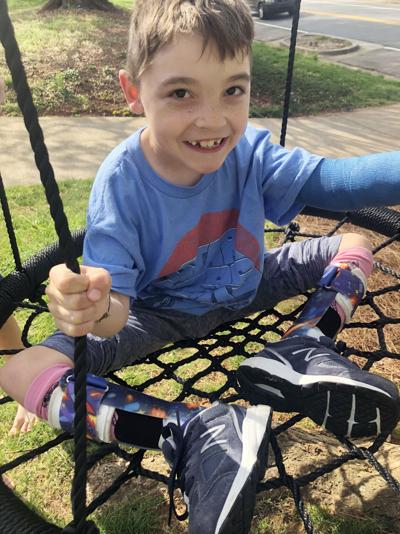 Sometimes we just need some extra pair of hands or paws or something to help get stuff done,” Allison Layton, a wife and mother of twins, said about her family’s everyday life.

Layton, a Winston-Salem native, and her family are fundraising for a service dog already given the name Walter.

The dog is for her son Ian Layton, 8, who has spastic quadriplegic cerebral palsy, a type of spastic cerebral palsy that causes muscle tightness, impacting his mobility in all four limbs to some degree. For Ian, his legs are more impacted than his arms. According to Layton, the condition is on a spectrum, with Ian’s case in the moderate range.

The Center for Disease Control states that cerebral palsy is “caused by abnormal brain development or damage to the developing brain that affects a person’s ability to control his or her muscles.” It is the most common motor disability in childhood.

Ian and his twin brother Owen Layton were born prematurely at just 29 weeks along.

“When you’re born that early, you know that there can sometimes be things that go wrong, but it wasn’t until he was two that we got his diagnosis,” Layton said.

Ian struggles with most physical activities, requiring assistance for various movements like sitting and standing. He uses a motorized wheelchair for mobility. According to Layton, he requires mostly total care, except for feeding himself.

While the condition itself should not deteriorate, other side effects can come about from cerebral palsy.

While Ian has struggles in his everyday life, he is defined by his passions and love. According to Layton, Ian “loves all things sports,” which she said “goes above and beyond” other children.

“He told a friend of ours…that he likes every sport except rugby, except he kind of likes rugby,” Layton said, laughing.

She believes Ian’s love for sports comes from the thought of “living vicariously through these people.”

In addition, Layton said, he is an “adrenaline junkie.” He loves to go higher and faster as well as enjoys the excitement of amusement park rides.

As for getting a service dog, Layton said, “it’s something we’ve thought about over the years; we know it can be helpful for people like my son, but there are a couple things that held us back.”

According to Layton, beforehand, he was still too young to get a mobility service dog, and the expense of buying and training one range from $17,000-$50,000.

“After looking at the money it was going to cost, I was like why not just go ahead and put it out there because this is probably going to take us conservatively a year to raise the money if not more,” Layton said. “We started it pretty quickly once we realized that he was serious.”

Nearing the end of the school year, Ian’s one-on-one, a person who assists in ways to keep him in the mainstream classroom, gave a note to Ian’s parents that he scribed. The note read: “Dear Mom and Dad, I want a service dog because I can take them into restaurants. My service dog, Walter, would be my friend, and we would talk and play all the time. My service dog, Walter, can be my helper by bringing things to me without asking others.”

The letter was the catalyst for the family to seriously research buying a service dog for Ian. A week or two after receiving the letter, they started the fundraiser.

“When he sent that letter, I was like ‘oh, you thought this out. You put thought into it; you’ve done some research,” Layton said.

She has seen the research for herself. Ian owns an Alexa and asks her to search videos of service dogs or what their breeds typically are.

According to Layton, they already started three applications, with one each in Ohio, Florida, and North Carolina, as the process is lengthy.

Service dogs are typically bred as labs, shepherds, or doodles of some kind, Layton said. If Ian could choose his dog, his dream would be a golden retriever.

The minimum training standards for public access for a service dog by the International Association of Assistance Dog Partners (IAADP) entails a minimum of 120 hours of training for six months or more, with at least 30 hours devoted to outings to prepare the dog to work obediently in public spaces. IAADP is a non-profit, cross-disability organization whose mission is to seek and promote responsible use of access rights in the disabled community.

According to Layton, while service dogs are bonded to the human they are assisting, they are also house pets and enjoy the comfort of an entire family.

“You hear so much about how a service dog is a working dog, and it needs to be so bonded to its primary person,” she said.

After doing more research and hearing from others who train service dogs, Layton said, “yes, it’s a working dog, but it’s also a family pet.” When the dog is not on duty, he or she gives love to others.

As Ian grows older, Layton believes the service dog will be a “game-changer” for living his everyday life.

Ian chose the name Walter because it is a character in the hit Christmas movie “Elf.” Walter is Buddy’s dad, who learns to love Christmas.

As coincidence would have it, Ian’s favorite dog when his family goes to Tanglewood Dog Park is named Walter.

“I think that’s coincidence, though, because he had already written the letter before we started taking our dog Murphy out there,” Layton said. “We go to Tanglewood, and here’s this dog named Walter that he just gravitated to.”

Since the animal is identified in her son’s mind, Layton said, “that was another piece, this thing has a name already – he exists!”

According to Layton, Walter would be beneficial to Ian in a few ways. His parents want him to be safe, such as when he rides his scooter on sidewalks. In addition, the dog could assist with picking up items, helping pull on and off clothing, and even pressing an elevator button, which is hard for people who use wheelchairs.

“Even if we go somewhere and Ian’s not able to participate, he won’t just be sitting there by himself. He’ll have his buddy,” Layton said.

However, she believes the biggest reason Ian wants a service dog is to gain more independence.

“He hears the word wait a lot because I work full-time, my husband works, he has a twin, and we have a dog,” she said. “It’s just like you would tell any other kid to wait, but he hears it a lot more because he can’t get up and go get the snacks from the pantry or if he drops the remote.”

“We will always help him, but just not always on his timeline,” Layton said.

Although the family set up an online fundraiser, they have been and will continue to organize events for Walter as well. Recently, Layton said, the family hosted a “Workout for Walter” event with her husband, a personal trainer. In the future, the family wants to host a “Waffles for Walter” and a “Walk for Walter” like Relay for Life, allowing children and people of various abilities to take part.

“What we don’t want to do is expect people to give us money,” Layton said. “We want to be out here working for it and show Ian and his brother that, yes, people are being very generous with their money, but also you’re putting in work to help get to that point.”

“I know that that sounds like such a high (amount), and we may never meet it, but if you never put it out there, you’ll never know,” Layton said.

“We’re hopeful that one way or another we will get a service dog, whether we have to just find the money ourselves,” she said.

According to Layton, some organizations that breed and train service dogs only require a donation of a certain amount.

If the family needs less money than the amount they raise, they will stop the fundraiser and donate the remainder of the funds to a family in a similar situation.

In the past and presently, the community has offered a lot of help for the family. As Layton says, Walter, in their minds, will be a “community service dog.”

“If there is one thing that I’ve learned in this special needs journey is that you don’t do it alone, there’s just no way,” Layton said. “We are not accessible enough yet, and we are not inclusive enough yet. You have to have other people to help you.”

“Our hope is that we can get Ian his dog and be able to help the next person on their journey,” she said.