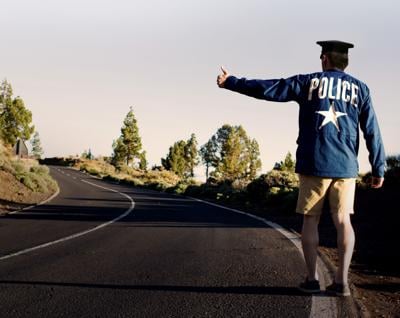 According to a study published in the April 2020 edition of the Yale Law Journal, the “wandering officer” is a common occurrence in the law enforcement industry today.

Defined as an officer who leaves or loses their position after being investigated for alleged malfeasance or liability and is then hired by another department, the “wandering officer” often picks up and starts over elsewhere. So does police officer accountability.

The most infamous example of what has been called Wandering Officer Syndrome is that of Timothy Loehmann, the white Cleveland police officer who shot eleven-year-old Tamir Rice. Loehmann responded to a report that a “Black male” was “aiming a pistol” at people in a city park. A grand jury declined to indict Loehmann, primarily on the basis that Rice was carrying an airsoft replica without the orange tip that identified it as a toy. A lawsuit brought against the city of Cleveland by Rice’s family was subsequently settled for $6 million.

Prior to killing Rice, Loehmann had been allowed to resign from his previous employment by the Independence, Ohio police department after he suffered what an investigation called a “dangerous loss of composure” during firearms training. According to his supervisors in Independence, Loehmann “would not be able to substantially cope, or make good decisions” in stressful scenarios. Less than two years later, the Cleveland Police Department failed to review Loehmann’s personnel file before hiring him. Another Ohio department later hired Loehmann after he killed Rice and was fired by Cleveland.

Closer to home, Douglas A. Strader, a former corporal in the Greensboro Police Department, was hired by the City of Graham at the rank of Police Officer 1 on March 1. Strader was one of eight GPD officers involved in the 2018 hogtying incident that led to the death of Marcus Smith, as previously reported on by YES! Weekly. Smith died after being restrained facedown on Church Street via a now-prohibited restraint device. Strader and the other seven officers were not disciplined for Smith’s death but are currently defendants in a federal civil rights lawsuit filed by his mother. Other defendants include the City of Greensboro and two Guilford County EMTs. The officers, EMTs, Greensboro Mayor Nancy Vaughan, former GPD chief Wayne Scott, and current chief Brian James were deposed last week by Plaintiff attorneys for a trial expected to begin this Fall.

Strader’s September 2020 termination was for an October 2019 incident in which the then corporal fired at a vehicle fleeing a crime scene in downtown Greensboro. The interval between incident and termination was due to the appeals process.

“A single mistake, error or lapse in judgment while using deadly force can have tragic and long-lasting consequences for our community,” wrote Greensboro City Manager David Parrish to Strader on Oct. 9 of last year. “For these reasons, I am upholding your dismissal from employment with the Greensboro Police Department.”

The incident report stated that Strader was one of four officers who fired at the fleeing vehicle. On Dec. 2, 2020, GPD denied YES! Weekly’s request for the names and current employment status of the other three officers. Strader’s salary was $58,348 in 2018. He later received two merit raises and was making $61,126 when fired. The City of Graham confirmed his hiring date and new rank. On Monday, YES! Weekly filed a public information request for his current salary but had not received a response by press time.

In May 2010, Sandra Almond was driving from a Sunday church service in High Point in her Honda Accord, with her 11-year-old grandson Elijah Allmond and his friends Steven and Taylor Strange were passengers. At the I-85/River Road intersection, her car was struck by a Charger driven by NC Highway Patrol Trooper J. D. Goodnight, who was in high-speed pursuit of a car he had said was going 25 miles over the speed limit.

Goodnight accelerated to 121 mph, and turned on his blue lights but not his siren.

Almond, 55, died at the scene of the collision. Her grandson Elijah suffered two brain hemorrhages. Nine-year-old Taylor Strange died at the hospital. Trooper Goodnight resigned from the Highway Patrol after the accident and was hired by the Guilford County Sherriff’s Office.

A civil suit, brought by Almond’s sons, went through a civil court proceeding and appeals court before Goodnight’s actions were brought before Robert Harris, deputy commissioner for the North Carolina Industrial Commission. Harris concluded that Goodnight should have waited to cross the intersection before accelerating to catch up to the speeder and that Allmond’s family suffered a significant loss by her death. He concluded that Allmond’s three sons should be compensated $1 million for the loss of her life and that Elijah, who has since graduated and turned 18, should be compensated $250,000 for his injuries and the horror he experienced in the wreck.

At the time of the 2018 decision, Goodnight was still employed by the Guilford County Sheriff’s Office at the rank of Deputy Sheriff/Master Corporal and an annual salary of $55,435. Goodnight and his employers declined to comment on the outcome of the civil case.

Another example is Tom Coleman, a former undercover narcotics officer in Tulia, Texas. In a massive 1999 raid, the Tulia Police Department arrested 50 men, 40 of whom were Black (and represented a fifth of the tiny city’s Black adults), on Coleman’s testimony that he had purchased powder cocaine from them. Most were convicted, receiving from 20 to 361 years, and Coleman was awarded Texas Lawman of the Year.

After a media investigation and defendant litigation, the cases against the 50 men fell apart. Coleman never recorded his buys and misidentified suspects, and there were no witnesses and little corroboration of any sort. Coleman was indicted for perjury, and his convictions vacated.

Prior to Coleman’s false charges against the men, he had what the New York Times called “a wretched work history” and “was in constant danger of being fired.” In Cochran County, Texas, he had left his job as a Sheriff’s Deputy after the county attorney witnessed him stealing gas from the county pumps. He skipped town-owing thousands of dollars to local businesses. In an angry letter to the State of Texas, the Cochran County Sheriff stated, “Coleman should not be in law enforcement.” Yet he managed to join the regional task force that sent him to Tulia, even after a background check revealed that he “was a discipline problem,” was “too gung-ho,” that he’d been accused of kidnapping his son in a custody dispute, and alleged that he had “possible mental problems.”

After leaving Tulia, Coleman had three law enforcement positions and was fired from the third for sleeping with a sex-worker who was an informant for his then-employer.

These details are from the Yale Law Journal study cited earlier, which called Coleman and Loehmann archetypal wandering officers, meaning LEOs who are fired or who resign under threat of termination and later find work in law enforcement elsewhere.

In that article, authors Ben Grunwald and John Rappaport examined how such officers still manage to find work.

“For starters,” they wrote, “local agencies do not always conduct thorough background investigations before hiring. Even when they do, past employers are not always forthcoming and sometimes conceal the real reasons for an officer’s separation. Anecdotal evidence suggests that officers who commit misconduct are often allowed to resign, with a guaranteed positive work reference, in exchange for forgoing legal action. Similarly, local agencies do not always notify their state POST [Police Officer Standards and Training] boards about officer misconduct. Even setting aside cases in which local agencies disregard mandatory disclosure obligations, reporting to POST is wholly voluntary in most states. Agencies are reportedly reluctant to disclose negative employment information—either to other local agencies or state POST boards—for fear of being sued for defamation.”

Sometimes a fired (or forced to resign) officer’s record does prevent him or her from being hired elsewhere. An example of this is the 2018 case of former Greensboro police officer Daniel James Boombungrung.

To be employed in North Carolina, an officer must be certified by the NC Department of Justice. Case # 18DOJ00497, which was heard on August 13, 2018, in the NC Office of Administrative Hearings, records that Boombungrung resigned from the GPD while under investigation for “willfully failing to discharge duties” and for “failing to maintain good moral character,” and that Boombungrung’s NC DOJ certification was suspended. The police department of Surf City, NC, on Topsail Island, then conditionally employed Officer Boombungrung. His application triggered a review of his Certification, its suspension was upheld, and his Surf City employment terminated.

“Certification of police officers is handled by the Criminal Justice Education and Training Standards Commission; any inquiries should be directed to them. You would need to contact the Graham Police Department for questions regarding personnel related information for that agency.”

On Tuesday afternoon, this writer directed this inquiry to the NC DOJ Department of Criminal Justice Education & Training Standards. Two hours later, Laura Brewer, Communications Director for NC DOJ CJETS, responded “I am told that he [Douglas Strader] is currently certified with the Graham Police Department.”