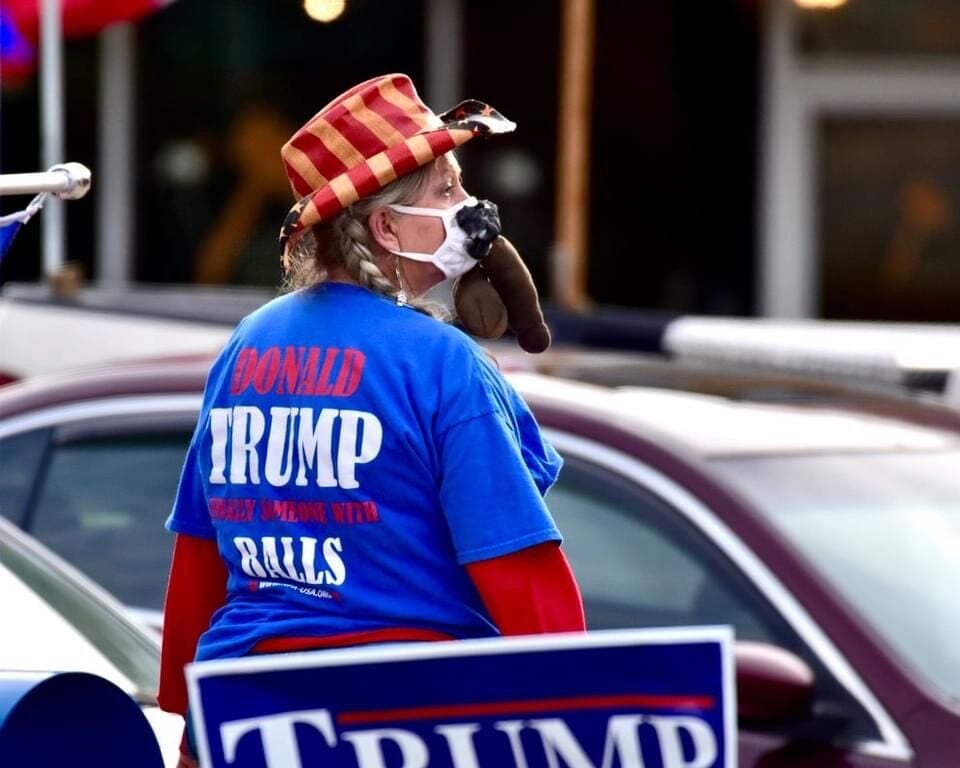 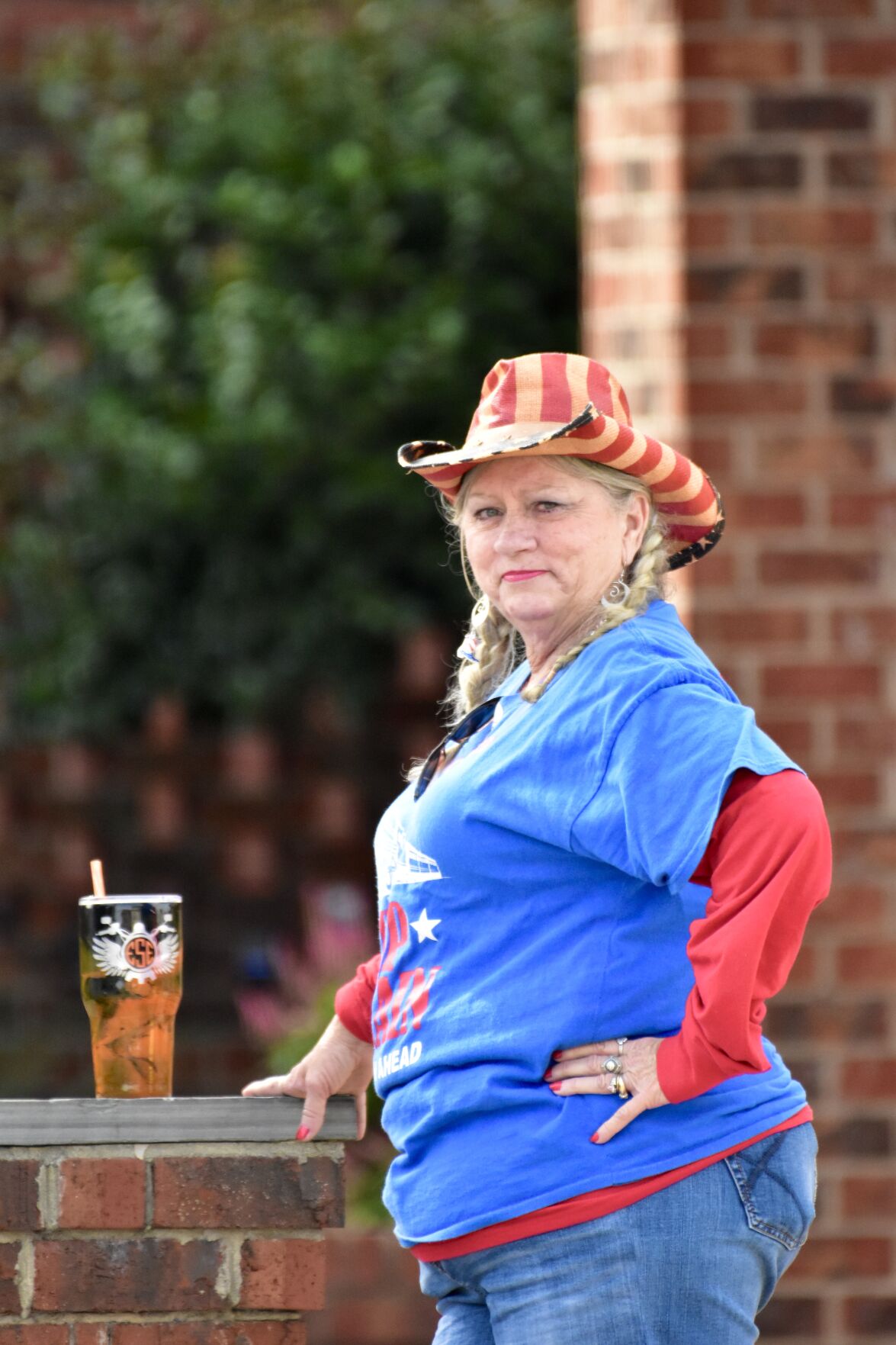 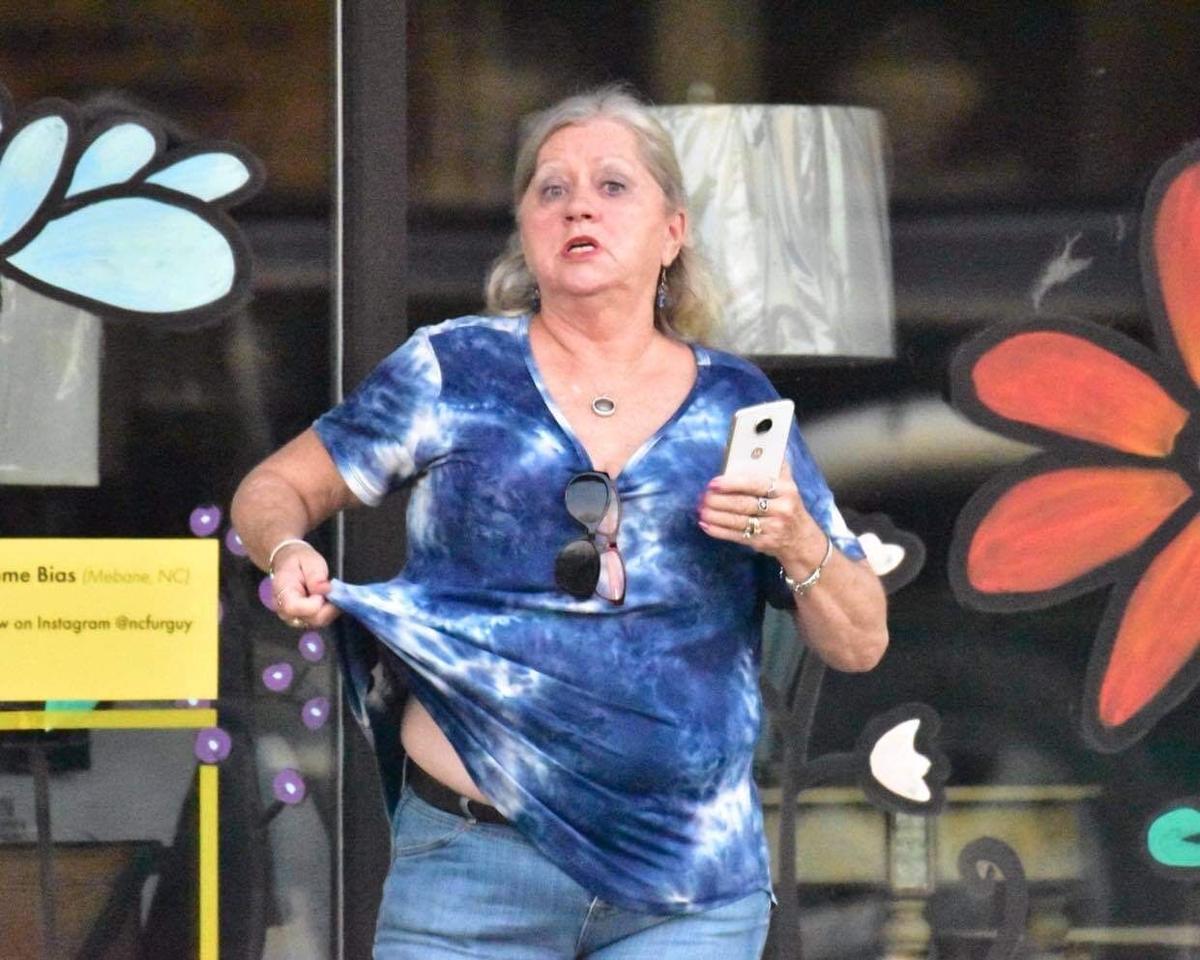 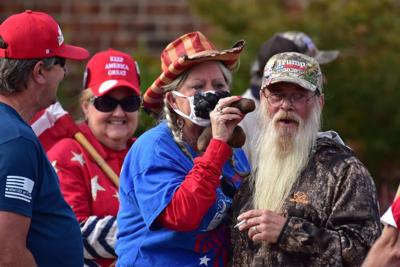 Last weekend, photos of a white female Trump supporter in a phallic mask went viral on social media. The photos were taken by Anthony Crider, an Elon University professor who documents the activities of white supremacists and those protesting against them across North Carolina. Crider gave YES! Weekly permission to post his photos to Facebook, where the photos have garnered over 9 million views.

Crider identified the woman wearing the surgical mask with a crocheted representation of Black male genitalia attached to the mouth area, and a T-shirt with “DONALD TRUMP/ FINALLY SOMEONE WITH BALLS” printed on it, as Judy Elaine Stuart— and said she was among those heckling Black Lives Matter counter-protesters in downtown Graham last Saturday. Crider also took photos of her without the mask, after she participated in the “Trump Convoy” that drove through Alamance County earlier that day.

That convoy made headlines around the world after multiple participants, including Baptist minister Jesse Hursey, shouted “white power” at Elon professor Megan Squire from their vehicles.

A woman riding in a gray pick-up truck decorated with Trump signs shouted, “No, they fucking don’t, bitch” in response to the Black Lives Matter sign Squire was holding. Squire and her husband, Crider, are known for researching hate groups and their recruitment on social media.

Crider said he had previously photographed Stuart on Aug. 17 at a rally outside a meeting of the Alamance County Board of Commissioners.

As previously reported, Carey Kirk Griffin attended that meeting to present the results of a symbolic ballot by Forward Motion NC, Downhome Alamance, and Siembra NC, among other organizations. Before Griffin entered the council chamber, she was assaulted on the sidewalk by a woman in a blue and white tie-dye shirt, who shoved Griffin after Griffin chanted “Black Lives Matter.”

Although Griffin said she did not retaliate, both women were charged with simple assault. Anti-racist activists allege this is typically the case in Graham— if neo-Condfederates assault an anti-racist, both parties are cited or arrested, but if an anti-racist assaults a neo-Confederate, only the anti-racist is charged.

Alamance County court records show that the woman charged with a misdemeanor for assaulting Griffin is 60-year-old Snow Camp resident Judy Elaine Stuart. Those records also show that Stuart was charged with assaulting Avery Harvey, a Black man, after the county commissioners meeting on Monday, Sept. 21. On that occasion, Stuart was also charged with disorderly conduct. Stuart also has a dismissed charge for simple assault on Patricia Ann Harris dating from Aug. 9, 2018.

“Elaine Stuart, who has been seen in the obscene mask during the Trump rally, is the same woman who assaulted me in August at the press conference for The People’s Referendum," Griffin told YES! Weekly. "Beyond that assault, she has threatened me and called me names while I have been walking in downtown Graham unaware of her presence. She should be held accountable for her actions. While we have a long way to go to see fair and just policing practices in real-time in Graham, especially as it pertains to Black and white people, I am happy to see Graham Police Department following through on these charges.”

Crider said he also photographed Stuart on Aug. 17, the evening Stuart allegedly assaulted Griffin. Crider said this occurred after Stuart saw him and yelled, “Hey there, Mr. Antifa Photographer, why don’t you come over here and take my picture?” Crider alleged that she then lifted up her tie-dye shirt and flashed him.

Another person to identify the woman in the penis mask as Stuart is Amy Cooper, who often takes part in anti-racist protests in Graham. Cooper told YES! Weekly Stuart approached her, holding the mask and shoved it in her face.

Cooper said that, as usual, she and other anti-racist protesters were on one side of the street, the neo-Confederates on the other.

“I was walking across the street to get drinks for everyone because we forgot the cooler. When I reached the Confeds’ side, Elaine Stuart approached me. She shoved her dick mask in my face and said ‘here you go, Amy Cooper, I know how much ya like Black dick!’”

Cooper said that was not the first time she has seen Stuart with the mask.

“She brought it up to me another night we were down there and said ‘tell your friend Lindsay I have a present for her; I know how much she likes black dick.”

This remark, Cooper said, was a reference to Lindsay Ayling, against whom local white supremacists have directed a campaign of harassment and intimidation after being given Ayling’s personal information by a now-imprisoned neo-Nazi.

Despite multiple attempts, Stuart could not be reached for comment. In a Friday morning Facebook exchange with Cooper, Stuart appeared to acknowledge making the mask but blocked this writer after I sent her a message and made a comment asking the mask’s purpose. Phone calls to the number listed for her Snow Camp address were not answered.

A paper bag over he head would be more appropriate.