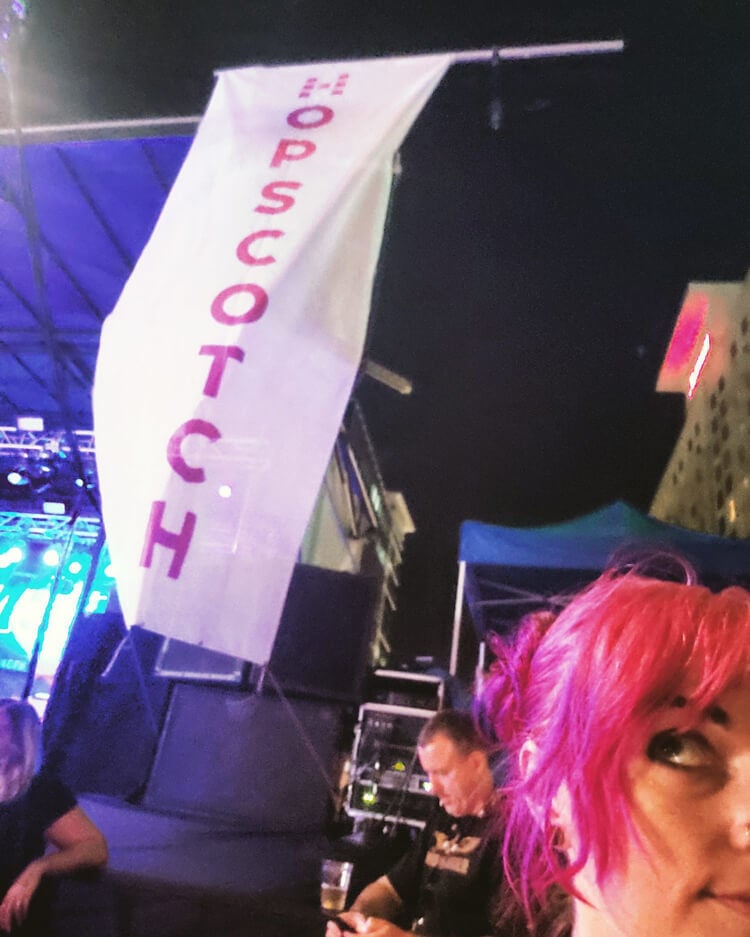 It seems like summer goes by in the blink of an eye. And without missing a beat, the pools close, the grills go out, and since 2010, the swan song begins with the Hopscotch Music Festival taking over downtown Raleigh.

Though the festival lies square in the Triangle, the Triad pokes through. For 2019, Greensboro’s Mourning Cloak and No Whammy, from Winston-Salem, act as Triad hosts on the Hopscotch bill proper.

Mourning Cloak features Kris Hilbert, the Greensboro recording wizard behind Legitimate Business, and members of Torch Runner, Graf Orlock, and Braveyoung. They’ll kick things off with a doomy funeral bang as the first official festival act at Kings on Thursday night, on a bill curated by Solar Halos.

No Whammy will reign-in the Winston crew with their set on Saturday night at Neptune’s. The instrumental “surf/spazz” trio is the latest endeavor from Anthony Petrovic. They’ll open what will be a weird can of worms of a bill, ushering a wave of experimental noise cresting throughout the underground venue.

Beyond the scope of ticketed Hopscotch is the weekend of free parties and day shows which weave throughout downtown Raleigh. There’s freedom and delight in the day party disco, where Triad-connected bands shine, all for free (and often catered,) with no festival wristbands necessary.

1970s Film Stock kicks off a Thursday party at the Night Rider, as the pseudo-theater-group Magician’s Hand Practice presents: “A Day at Jordan Lake,” which looks to be a hoot—or as Eddie Garcia calls it, “a doozy.” With actors, projections, and a bill packed with faces familiar to Triad folks, who needs to dip festival toes when you can dive right in?

MHP looks to lend their assistance with a party that’s “an installation, an experience, a submersion in the murk,” with the visual department featuring projection work from Greensboro expat Jeff Bechtel and his “B.L.E.W.” VHS wizardry. Bechtel carries B.L.E.W. to the audio realm with his corresponding punk project, Huffer—a mostly Raleigh outfit with a touch of Greensboro from guitarist Brad Morton—who’ll play the “Hopscotch Hangover Ain’t Over” party, closing the weekend on Sunday night at Slim’s.

Beyond the Night Rider party, B.L.E.W. will light up the Outpost on Saturday for a show benefiting the Women’s Center of Wake County. Presented by Rebel Run and Raleigh Rum, the tiki venue will be taking donations of sanitary and personal needs items.

Also on the Outpost bill is William Kelly, a new endeavor from Kelly Fahey, who shed his Echo Courts skin to get more comfortable in a countrified outfit. The project will make its actual debut a couple days before, on Thursday, at the Wicked Witch. Presented by Tiger Bomb Promo and To Be Heard Booking, the bill also features Winston-Salem ambient act Foxture, now making mathy waves as a four piece.

Harrison Ford Mustang adds Triad flavor to the “Potluck Rock ‘n’ Roll Pizza Party” Thursday at Slim’s. Tasty Triad treats continue with Toothsome on Friday for the “the Rising Tide” party at Transfer Co. Food Hall. Presented in partnership with WakeUP Wake County and We Claim Raleigh, the show will feature mayoral candidates amongst the festivities. Further mingling politics and music, The Muslims are back in the United States after playing Kanalrock in Norway, and have two day party slots, each providing fans a chance to “headbang for a good cause.” First on Thursday at Imurj for Girls Rock N.C., followed by a set on Friday as part of the “To the Front” party at Ruby Deluxe, benefitting N.C. Resists and Siembra.

On Saturday, Stevie will spread sweet lo-fi femme throughout the “Both Kinds Radio” party at Person Street Bar, presented by Nice Price, Jr., with donations accepted for Planned Parenthood.

Celebrating the full 10 years of Hopscotch, Churchkey Records and the Layabout will again join forces with Slim’s, as they’ve done each year, for their “¡Que Viva!” party complete with rock ‘n’ roll and Bojangles biscuits on Friday, with Drag Sounds on the bill as a soundtrack for fuzzed-out Greensboro memories, and those of Hopscotch 2019 in the making.

Good causes. Good tunes. Goodbye, summer. The 10th anniversary of the Hopscotch Music Festival starts Thursday with Triad connections throughout the weekend.  Hope to see ya there!

Katei Cranford is a Triad music nerd who’s been Hopscotchin’ since it all started in 2010, and hosts the Tuesday Tour Report, a radio show that runs like a mixtape of bands touring NC, 5-7p.m. on WUAG 103,1fm.