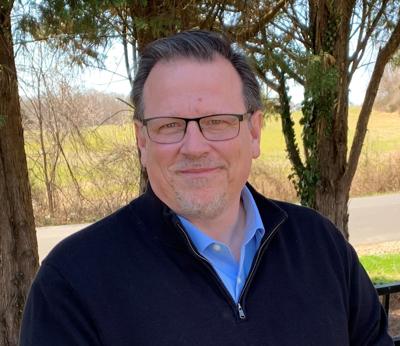 “In growing up, it was music or baseball. I had a little bit better of a chance at music,” Mark Norman, the new artistic director and conductor of the Piedmont Wind Symphony, says about the origin of his devotion and passion for music.

Norman, a professional tuba player and conductor, whose served as the director of instrumental ensembles and conducting faculty artist at UNC School of the Arts, started working for the Piedmont Wind Symphony in February.

“Though I love college band directing, I knew I always wanted to get back to also having a pro group, and now this is it,” Norman said.

The Piedmont Wind Symphony, established in 1990 by Rob Simon, a Granger scholar and a group of local musicians, music educators, and students, was formed to play demanding repertoire for wind ensembles.

“What spurred this organization was Rob’s vision of having this wonderful professional wind band in this area, and it’s survived all these years very well,” Norman said of the ensemble that is typically around 50 musicians.

After Simon stepped down from the role in 2015, Matthew Troy, a conductor, musician, and educator, took his place until early 2020.

“The Piedmont Wind Symphony has served this community really well,” he said.

According to Norman, he had a “running start” into the new position.

In October 2020, the Board of the Piedmont Wind Symphony approached him to do a Beethoven project after being awarded a grant to celebrate the 250th anniversary of Beethoven’s birth that was part of a community-wide “Beethoven Rocks” campaign. Norman agreed to put together a program focused on the iconic composer, resulting in a three-part film series.

The project, named “Beethoven and the Winds,” includes music inspired by Beethoven, a tribute to him, and a wind ensemble of Beethoven’s seventh symphony.

The production went “fantastically,” Norman said, and that is when they offered him the position of music director. While Norman started his new role in February, it was not made public until two months later.

Simon is also excited to have Norman take on the role, stating he will bring the Piedmont Wind Symphony to the next level.

“He knows the repertory and stays on top of new compositions to keep the growth of versatile programming,” Simon said. “Musicians like Mark because he knows what he wants and what he is doing. I like Mark, his style, experience, his understanding of how the PWS originated and where it could go.”

According to Norman, his dad was the catalyst for him to start playing music. While Norman would not describe his family as musically inclined, his dad was a wonderful harmonica player.

“He would play harmonica…and I realized I really dug that,” he said.

In the second grade, Norman picked up the guitar while he was living in Florida. After his family moved to High Point, the place he grew up, Norman auditioned for his school’s band.

“I heard somebody play the trumpet, and I wanted to play trumpet, and then, later, my best friend switched from trumpet to tuba because he had braces,” Norman said. “We were first and second chair trumpet players in our band, and suddenly I was like if he’s going to switch, I’m going to switch.”

The sound of the tuba inspired him.

He attended many summer music camps, such as those organized by the University of North Carolina (UNCG) and East Carolina State University.

“To be a professional musician, it takes a lot of sacrifice and a lot of hours; I always loved practicing. So, I had no problem practicing four to six hours a day,” Norman said.

After his sophomore year in high school, he knew he would become a musician.

At 18, Norman was a substitute tuba player for the Greensboro Symphony, Winston-Salem, Charlotte, and North Carolina Symphony.

He started his full-time professional career at 22-years-old with the U.S. Navy Band in Washington D.C. Norman played for the band for four years but stayed in the area for 14, launching his conducting career.

“I like to say the 1990s is when I turned to the dark side of conducting,” Norman joked.

In 1993, he founded the Loudoun Symphonic Winds and, in 1997, the Riverside Wind Symphony. In 1998, he was named the music director of the professional American Wind Orchestra.

From there, he began his collegiate conducting career. He conducted the bands and orchestra at Towson University before returning to the state in 2002. While he was the music director of the Greensboro Concert Band and director of wind ensembles at the UNC School of the Arts, he finished his undergraduate degree, obtained his master’s degree, and Doctor of Musical Arts in instrumental conducting from UNCG.

He would go on to become the director of bands at Washburn University, in Topeka, Kansas; visiting professor of conducting at the University of Michigan; and a faculty member at the Peck School for the Arts at UW-Milwaukee before he and his wife purchased the Charlotte Music School.

Norman, who lives in Pfafftown with his wife Amanda, said there are challenges and thrilling moments as a conductor, dubbing the conductor the “ultimate multitasker,” who is often expressing the music to the musicians, listening to the music, comparing it to a previous score study, and communicating it to the ensemble.

“That’s our job as conductors, is to get the most out of the ensemble in front of us,” Norman said.

Like anything else, good conducting comes from constant practice.

Norman’s favorite part of his job is the collaborative nature and hearing everyone “in sync.” Conducting requires great relationships with the musicians, Norman said, adding, “the musicians make the music, we encourage.”

“There is nothing like a large ensemble because we’re able to create something much greater than any one of us could do individually,” Norman said. “The collective sound of what we do is unbeatable.”

Norman’s vision for the symphony is to become the wind ensemble authority for the state of North Carolina. Part of this vision, Norman said, includes incorporating Simon’s goal of being an example for other bands by embracing classical and newer music to create a “new soundscape.” In addition, he wants to connect with composers and younger audiences while expanding the educational programming, especially for the youth.

“I feel like we are about to take a big step forward in helping to lead the band movement in this state that is already so active, and I think we can even do more,” Norman said.

The new season for the ensemble begins in the fall but will bring a creative flair to their work. According to Norman, the ensemble will perform in various authentic settings, such as a church instead of a concert hall, but they will collaborate with other art forms such as film, bring in guest artists, and plan to do more community performances.

“Our first concert is going to be all about the joy of making music again together,” Norman said.

For more information, a schedule or ticket sales, www.piedmontwindsymphony.com.