You are the owner of this article.
Edit Article Add New Article
You have permission to edit this article.
Edit
Coronavirus
News
Real Estate
Food & Drink
Music
The Arts
Kids Family
Education
Cannabis
Sports
Photo Galleries
About Us
Advertise/Contact Us
Locations
Latest Issuu
Share This
1 of 2 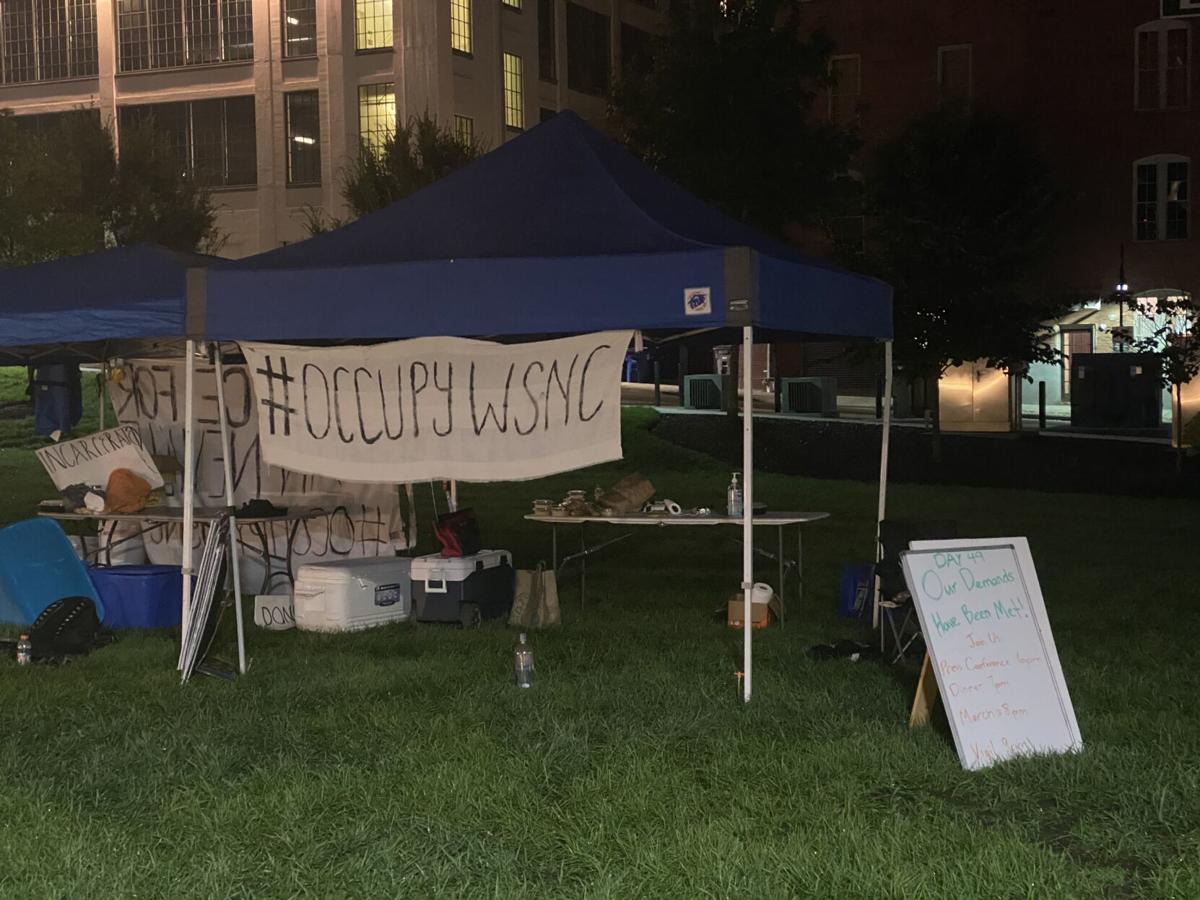 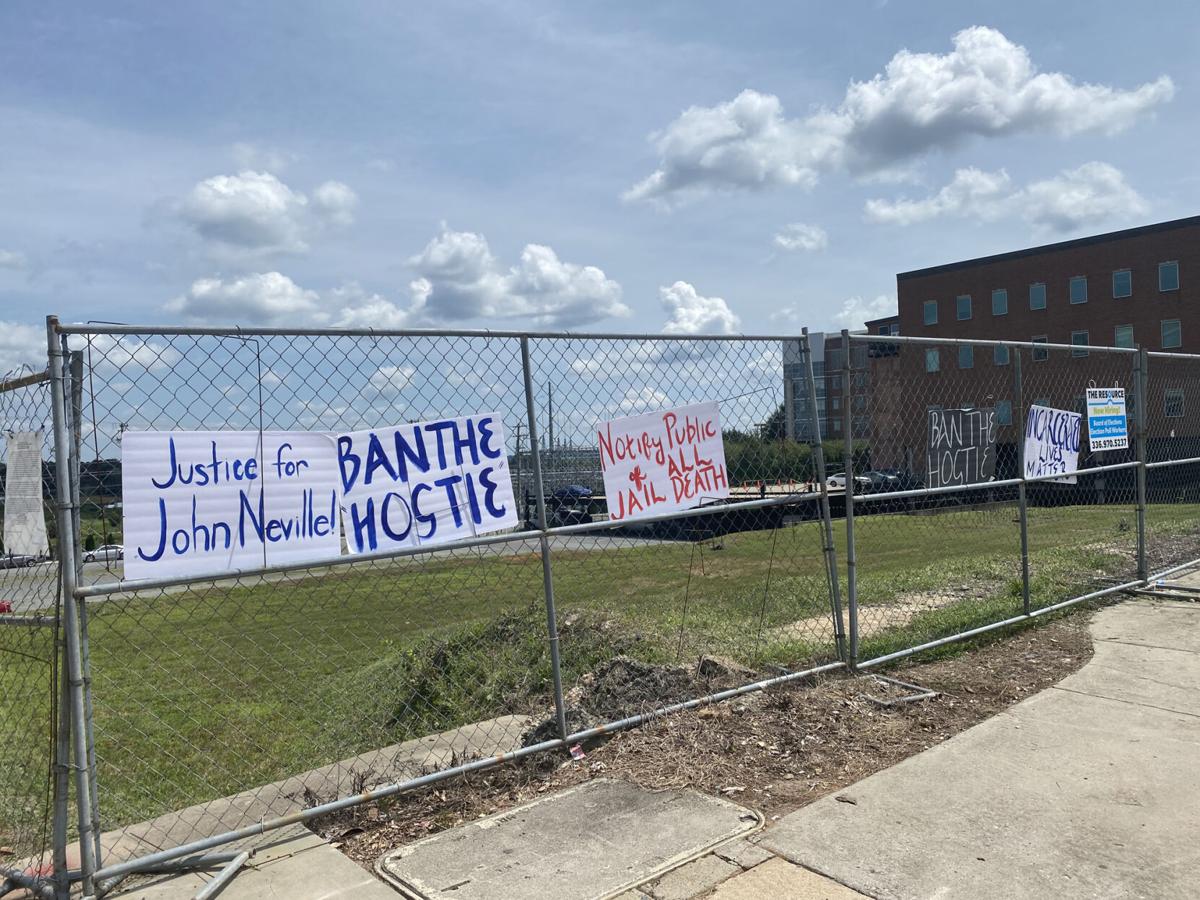 On the 48th night of #OccupyWSNC, the Triad Abolition Project announced that their demands had been met by the Forsyth County Sheriff’s Office and that the almost two-month occupation of Bailey Park would end on Sept. 1.

The #OccupyWSNC movement began on July 15, and at the helm of the movement was the Triad Abolition Project— fronted by Dr. Brittany Battle, Bailey Pittenger, and Hannah Campbell— and consisted of over a dozen frequent occupiers showing up every day in the blistering heat and flooding rain to march and push for their demands to be met. Over the course of the 49 days, 55 arrests on charges of “impeding traffic” occurred through acts of civil disobedience, where protesters intentionally stood in the streets of downtown to peacefully demonstrate.

On Aug. 27, the Triad Abolition Project sent out a statement regarding a meeting that occurred on Aug. 26, where TAP turned in the collaborative petition with the ACLU of N.C. that acquired over 1,000 signatures. According to the statement, the meeting between organizers and FCSO personnel indicated that the organization’s demands were going to be met.

YES! Weekly reached out to the FCSO to confirm this statement on Aug. 27. According to FCSO Public Affairs Officer Christina Howell, Sheriff Kimbrough made the following statement:

“We do not – and have not, in my time or under the previous administration – ‘hog-tied’ or used the Ripp-Hobble restraint in any capacity. There is a marked difference between a bent-leg prone restraint and ‘hog-tying’ an individual. Again – we have not endorsed or participated in the practice of ‘hog-tying’ an individual and any claim otherwise is not only inaccurate but inflammatory. We have always been committed to partnerships and dialogue, accountability, and transparency. We are continuously evaluating and updating our policies, procedures, and training to ensure that they reflect current best practices. Yes, it is true that, as I have stated publicly, many changes have occurred and many are underway. We were glad to meet with community members and review the changes that we have implemented, to explain our positions, and to better educate. We are always amenable to entering into conversation with our community members as we are the Office of the People. We are aware that our strength lies within our relationships. At the end of the day, it is our community and we cannot let barriers keep us from coming together harmoniously. As always, I remain grateful for the support of the people.”

YES! Weekly asked Howell in a follow-up email if the sheriff could confirm what TAP alleged was true, and if so, when those policy changes would be in writing but received no response.

On Aug. 31, Battle and Pittenger confirmed that the FCSO had emailed them the updated policy changes that reflected the two most important demands of TAP. The other two demands, Pittenger said, were dropped because their questions were answered from other sources, and they are confident that their legal team can get their charges of “impeding traffic” dropped. Even though their demands relating to policy changes were met, Pittenger said this is just the beginning of Triad Abolition Project’s work in the Winston-Salem community.

“It means more civic engagement, monitoring the SBI investigations in Forsyth County to make sure not an another John Neville case happens,” she said. “We are definitely going to do more direct action with education—sit-ins, teach-ins, that kind of thing—especially on abolition.” According to a press conference held by TAP on Sept. 1, Battle told the press that the TAP would be redirecting its attention on District Attorney Jim O’Neill, who, as Battle said, “appears hell-bent on prosecuting peaceful protesters, despite having tweeted just days ago, ‘Looking forward to serving alongside Kentucky AG @DanielCameronAG who understands we can stand with law enforcement & maintain law order while working with & alongside activists who are committed to stamping out inequality and racial injustice.’ It is unnerving that DA O’Neill seems at best oblivious, if not, in direct opposition to the efforts of activists here in Forsyth County working for justice for Mr. Neville. Activists working to stomp out inequality that his office is currently prosecuting. Activists who are simply exercising our right to protest and make our community safer for us all. Efforts which have been proven successful in getting a dangerous law enforcement restraint banned by the Forsyth County Sheriff’s Office. DA O’Neill has notoriously supported some of the worst elements of U.S. society, including violent, right-wing fanatics.” Battle specifically addressed a retweet by O’Neill on Aug. 18 of a video from the account @RepublicanAGs depicting a local Black, trans activist speaking about abolishing prisons at the DNC with the hashtag #LawlessLiberals.

Pittenger said that TAP would also continue to get people involved and keep them involved by “giving the community access to direct actions from a variety of spaces.” Pittenger said the occupation could not have continued for almost 50 days if not for the community’s participation and the “stamina and courage of the occupiers.”

“What a difference it makes to have a community involved in this kind of support,” she said. “Being interested in public comment periods to the point of getting a forum on the [WSPD] budget that would not have existed without the interest of the community.”

It took almost two months, 49 marches, over 1,000 signatures, four acts of civil disobedience, 55 arrests, three City and County government meetings, and two gruesome videos of a man pleading for his life to no avail for relevant policy changes to occur—all because a diverse group of empathetic comrades occupied Bailey Park and stood up for their siblings at the Forsyth County Detention Center.