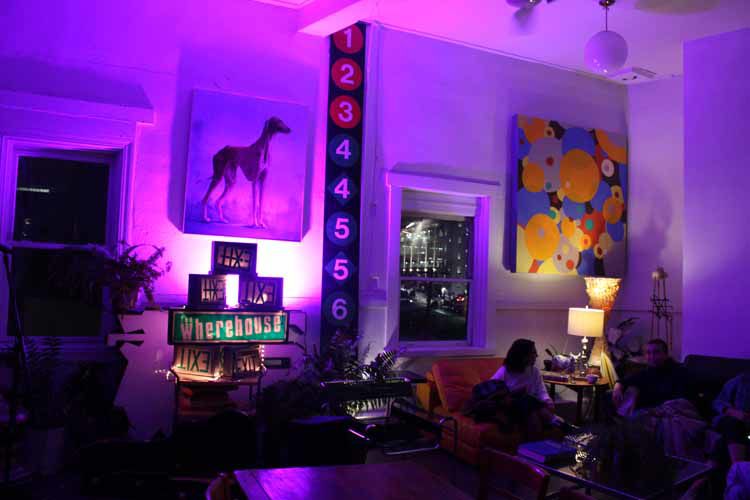 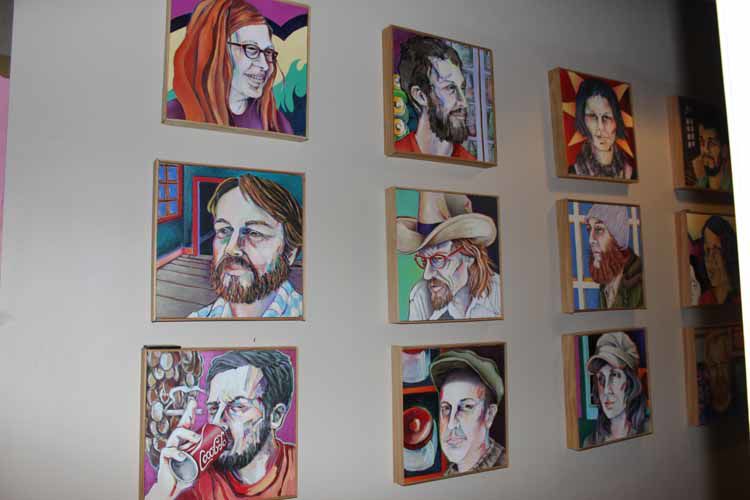 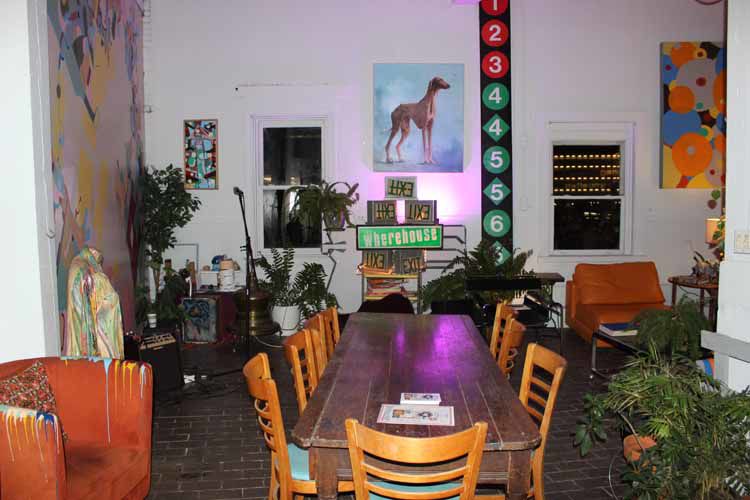 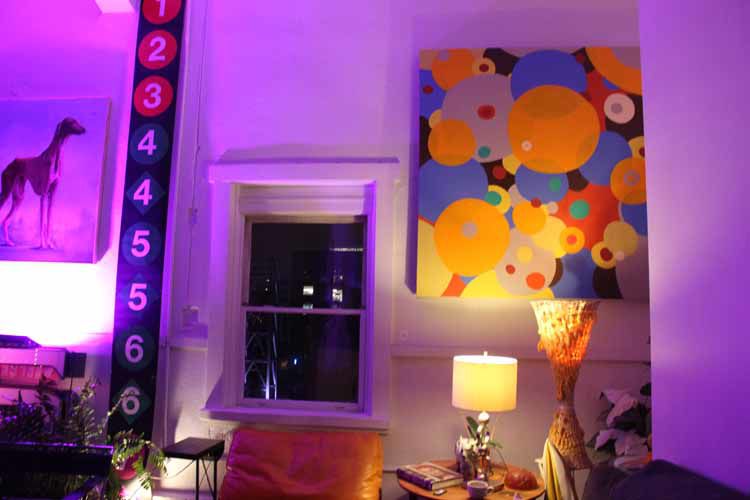 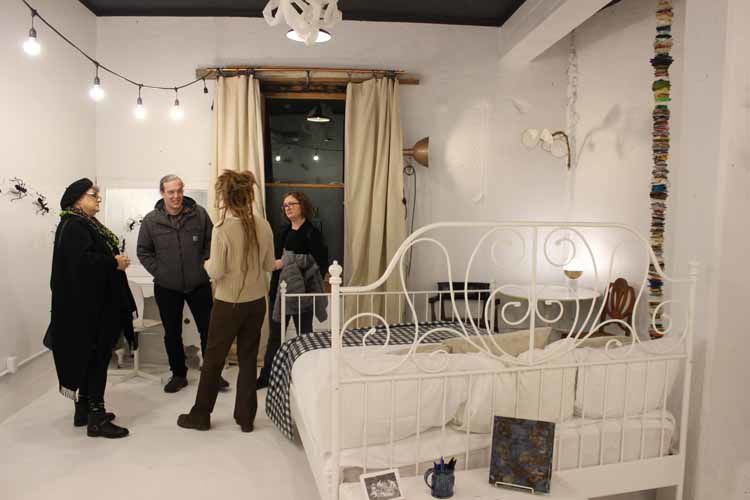 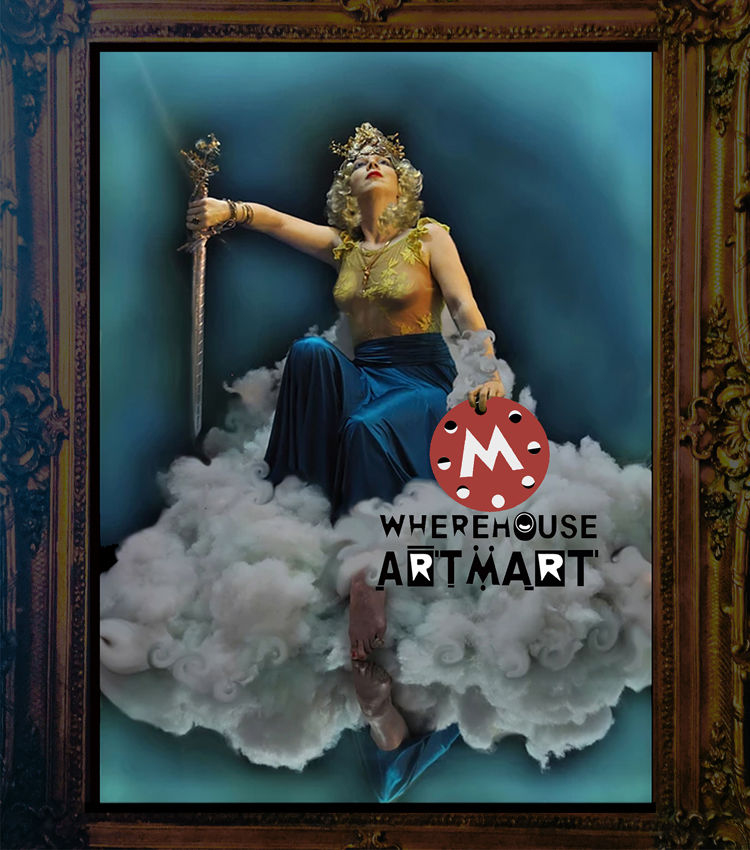 Inside of Winston-Salem’s Krankies and behind a bright red door, that is intentionally hard to find, is the red stairway that leads to The Wherehouse Art Hotel.

“That is by design because one of the coolest parts about it is the sense of discovery,” said the owner/operator and curator Haydee Thompson of the Wherehouse’s hidden entrance.

The Wherehouse isn’t a typical Airbnb, and it is probably the most unique one found in this area. On the second weekend in December, The Wherehouse will open its doors to the public for an art mart that showcases local artists from Winston-Salem as well as artists from North Carolina.

Located at 211 E. Third St., adjacent to the Innovation Quarter and on the railroad tracks, The Wherehouse building, which used to be a meat packaging plant built in the early 1900s, is steeped in history. But it was what happened within those walls that left a lasting legacy in Winston-Salem’s art scene that continues to evolve still today.

The Wherehouse began with five musicians/“pioneers” looking for a place to play their loud music and escape noise ordinances in the suburbs. Krankies co-founder and developer John Bryan was one of those pioneers who leased the building in his 20s and has since renovated it multiple times.

“Luckily, this building has an incredible owner that wants something special here, and he always has,” Thompson said.

Over time, the space evolved and became known as The Wherehouse. (It was also known as P.S. 211 and The Werehouse.) A group of about 20 artists formed The Wherehouse Artist Collective and inhabited the building in the early 2000s.

(A documentary series on YouTube called “Invisible States” shows a glimpse of this intentional community era and follows the collective as they travel the country in their “Grease Bus,” which was a 1971 GMC Charter Bus that ran on vegetable oil.)

“When we first moved here, our neighborhood was completely abandoned,” recalled Thompson of her time as a co-founder in the artist collective. “For a solid decade, we were the cultural hub of Winston-Salem.”

With an ever-changing city and its rising rent rates, the collective eventually fizzled out. Thompson stuck around Winston-Salem and helped usher in another evolution of The Wherehouse.

“I think the Wherehouse Art Hotel is a direct response to the cultural deficit,” Thompson said. “When cities start to thrive in one way, they may lose a bit of history and soul and what sparked it in the first place. I consider us (artists) as the first responders to a dying tobacco town. I just wasn’t ready to let that go quite yet.”

She started up the Wherehouse Art Hotel two years ago with the intention of preserving its history, reputation, and helping fellow artists sell and show their works without gouging the price.

“The Airbnb is for anybody and everyone, and we do get people from all over the world,” Thompson said of The Wherehouse Art Hotel. “We have a 90 percent occupancy rate, which gladly can afford us to be able to give back to the artists.”

“We only ask of the artists that stay here for a piece of their art,” Thompson said of residencies. “One for us to keep and one for us to sell.”

The Wherehouse has three (and soon to be four) bedrooms available for booking: the green room, the studio loft, and the gallery room. (The lobby and the entire Wherehouse is also available to book on Airbnb.) The Wherehouse is filled with art that’s for sale. Each room is decorated with artwork and equipped with a view of downtown.

“We do get so much feedback and reaction to this space; I think they just feel [its history] oozing out of this building,” Everton said.

There’s no doubt that The Wherehouse and its community has influenced others to do their own thing and keep the creative and innovative spirit alive in the city. Winston-Salem institutions such as Camino Bakery, Hoots, Monstercade, Krankies and so many others all have ties to The Wherehouse.

“The things that make Winston great, that we love about Winston, a lot of them originated from out of this building or from a community that was involved with this building and culture,” Everton said.

To help artists sell their artwork and get exposure, The Wherehouse’s gallery room includes a bed and doubles as an exhibition/installation space for artists. From now until Dec. 31, the gallery room is showing Nicole Uzzell’s “Indoor Picnic: Paper and Uninvited Guests.” (As seen on the cover of this issue, the art installation features palm-sized ants welded together and coated in a paper material lined up and marching in a circle on the wall of the room.)

“The gallery room, whenever there is an art installation, and anytime there is a booking for that room, that artist gets a part of the commission of that booking,” Everton said.

Staying true to the mission of keeping The Wherehouse a cultural hub and advocating for artists, The Wherehouse will be holding its first-ever art mart on Dec. 8 (from noon to 6 p.m.) and Dec. 9 (from 9 a.m. until 3 p.m.). The art mart will feature works from over 30 vendors all local to North Carolina with a focus on fine art. Some vendors include familiar names such as Liz Simmons, Jody Erickson, Andrew Fansler, Molly Grace, Nate Barchus, Anthony Lowe, Em Jackson, and Sean McNamara. In addition, there will be live music performances from Andy Freakin’ Mabe (a co-founder of The Wherehouse Artist Collective), Joe Blevins, Tim Poovey, Alex Bond of Animal Protein, Nate Lee, Snüzz, Amy Fitzgerald (Damiyana), Will Everton, and Oakley Hall’s Rachel Cox.

“It is a bi-annual mart, so we are going to do another one in the spring or summer, probably summer,” said Everton, who is also a curator of The Wherehouse Art Mart. “It had been something that I  had been thinking about before I started working with Haydee. I have always been in the flea market community, and I just loved that culture and art community.”

“It is the hotel version of an Art-o-Mat,” Thompson said describing art mart. “Mostly with this first one, we want to start local and build outside of there eventually, but give back to the artists that have been helping The Wherehouse.”

Everton said there would be a gift wrapper and a framer at the art mart so that those shopping for the holidays can have a one-stop shopping experience. Thompson said what sets The Wherehouse Art Mart apart from other art marts and craft fairs is that it is highly curated and mainly focused on fine art. Despite that focus, Thompson said that there would be a variety of different mediums represented.

“We believe in functional art and recycled art, and considerate art as well, but the vision originally was just to be fine art,” Everton said. “But we do have some fashion designers, jewelry makers, and even a toy maker. So there is some eclectic art thrown in there, and it is not just visual art.”

Thompson assured that the art at the art mart would be affordable because The Wherehouse will not be taking any commissions, meaning 100 percent of the profits go directly to the artists. Everton said the overall mission of the hotel and the art mart is to “be a voice for the artists, but also support to the artists.”

She said by not taking commission it keeps the art affordable to the public while also giving the artist all the profits from their works.

“A big part of this too is, it is great art and it it is affordable,” Thompson said. “We are trying to also take the stigma out of ‘oh it is not any good if it is not expensive,’ or only a certain demographic can take a piece home with them. This is an art mart for everyone.”

“We believe that art is for the people and it brings beauty to our daily lives, especially if you are paying attention,” Everton added. “We just want to broaden that and share what we get to experience regularly to an audience that never has before.”

Everton said the entry fee for the art mart is $5 per person, which covers the costs of the hotel shutting down for three days, as well as the decorations and refreshments.

As for the future of The Wherehouse Art Hotel and its art marts, Thompson said the sky is the limit. She is in the process of finishing another room for Airbnb and once that is done, she plans to start focusing on art sales, hosting offsite performances and producing shows.

“When I think of Wherehouse Art Hotel, I don’t think of physical hotel itself, I think of the website selling all over the country, which is what happens when guests come in from Texas or Washington,” she said. “All the sudden, this local piece of art gets going all over everywhere. Using that methodology, we see how we can expand our inventory of artists, and make a business out of it.”

Both Thompson and Everton agree that they would like to see The Wherehouse branch out and diversify its art collection and exhibitions.

“Our mission is not just geared toward local art,” Everton said. “We do want to give back to this community and support the artists that started out here with us. We want to branch it out to where we are just showing great art to Winston-Salem so that people can be exposed to that.”

“And have our artists being inspired by other people’s art as well. A lot of times it can be very insular locally,” Thompson added. “We love local art, but it would also be great to infuse artists from regionally and internationally so they can see our local artists and have conversations and be mutually inspired. So that is kind of the dream, but we are starting local and building off of there.”

For more information about The Wherehouse Art Mart or to book a night in the art hotel, visit the website.