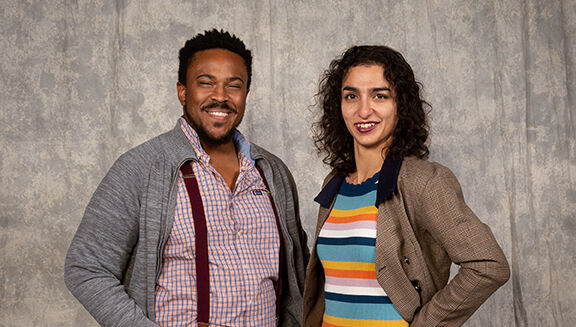 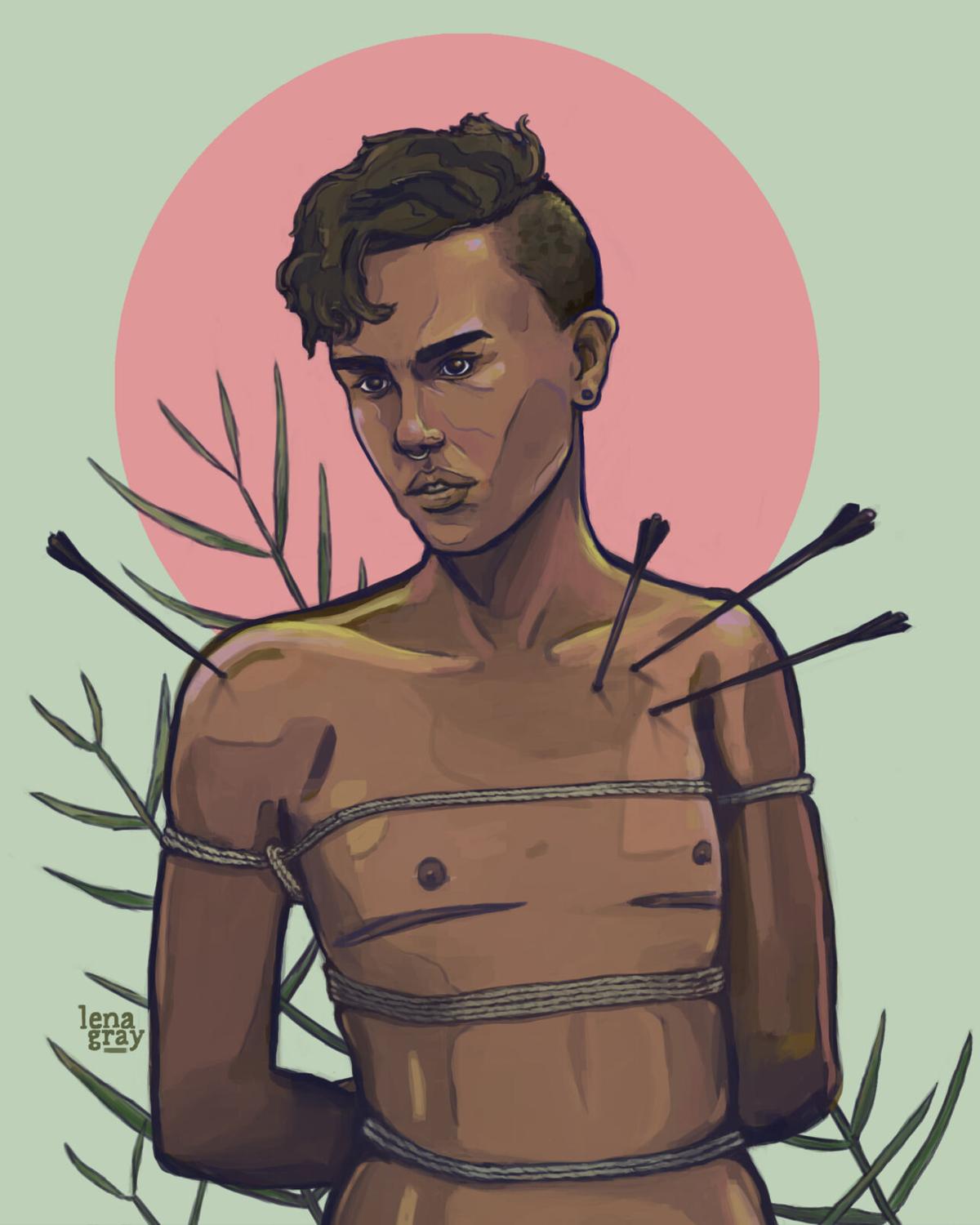 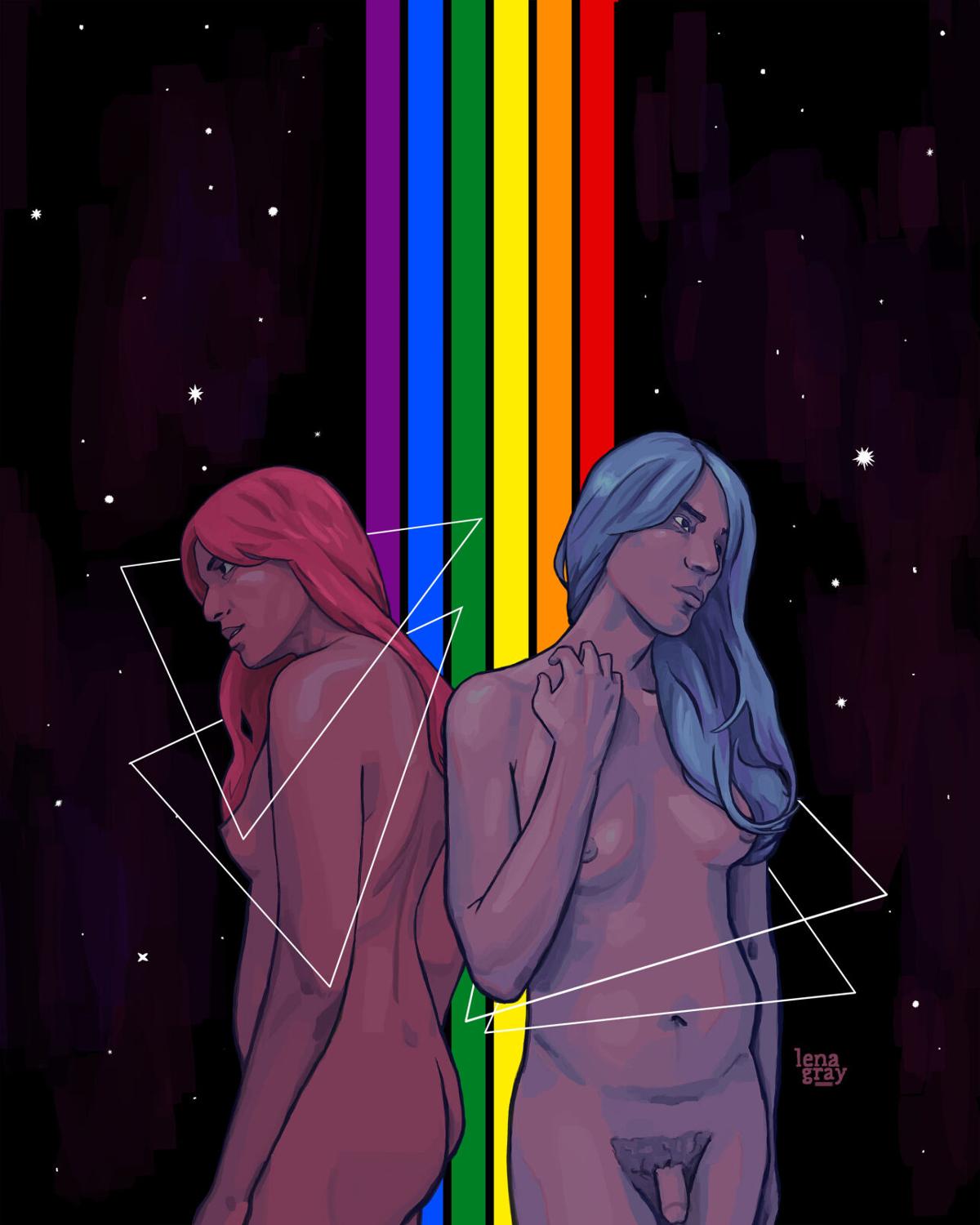 Jordan T. Robinson, of JTR Presents, is an aspiring curator that wants to uplift marginalized artists and communities through art. His upcoming virtual exhibition with co-curator Lara Americo does just that by spotlighting transgender art through “The Transparency Project.”

Robinson, 29, has lived in Greensboro and Charlotte since he was very young after his family moved from New York to North Carolina in the early 1990s. Robinson went to college at North Carolina A&T State University to be an architectural engineer, but as college students often do, he decided to change his major to pursue art and design.

Robinson then went to Savannah College of Art and Design in Atlanta for graduate school. After getting his Master’s degree, he got a job at an art museum and moved back to Charlotte to help his dad, who just started his own business. Robinson is now living back in Greensboro, where he serves as a board member at the GreenHill Center for North Carolina Art, located at 200 N. Davie St.

The Transparency Project is described on the website as an “exhibition elevating the voices and stories of the transgender community.”

“Given recent events for the Transgender community,” the website states, “we believe now is the most appropriate time to observe and address the systems and cultures that negatively influences this community and to use art as a platform for the community to tell us who they are in their own voice and how allies and neighbors can be of better help to them.”

Robinson said that The Transparency Project’s goals are to use art as a platform for trans people to tell their own stories, inform the public about the effect of transgender representation in media, raise awareness of transgender issues, offer resources to mobilize trans people, provide a forum so that others can interact with artists, and engage North Carolinians in advocating for and supporting transgender rights.

“I would say what the idea [for The Transparency Project] started from a conversation from a gallery exhibition I did back in September 2016, like right before the presidential election,” Robinson said. “I had done an exhibition about identity that featured five upcoming, contemporary artists, and one of them was Nicholas Contrera. He had mentioned to me that in his social circles in North Carolina, people are talking to him about how transgender topics were not really talked about in the state. I thought that was interesting, so I kept in the back of my mind.”

After the 2016 election, Robinson said he noticed some alarming transphobic rhetoric while watching political commentators.

“One of ‘em was Ben Shapiro, and he had made this statement about how being transgender is actually a mental health disorder, and that was huge red flag number one,” Robinson said of Shapiro’s comments. “That [comment] immediately made me think about what it was like in the 1960s— where it was believed that being gay was a mental health issue.”

Robinson said he felt compelled to advocate for trans people through this exhibition after the Executive Order administered by President Donald Trump (that went into effect in 2019), which essentially banned transgender people from serving in the military.

“That was right in my lane,” Robinson said. “For me, as an emerging curator, I want to produce exhibitions that relate to topics that affect our communities today, and I’m actively looking at how art institutions can better serve their community. So, I took this as an opportunity.”

Robinson started asking around the Charlotte LGBTQIA+ community for more information and resources to get started.

“I asked Rodney Tucker— he’s the CEO of Timeout Youth, an organization in Charlotte that helps LGBTQ-minors that are disowned or kicked out of their homes because of their identity,” Robinson said. “I jointly met with him and Trey Green, the co-founder of another organization specifically for transgender communities in Gastonia and Charlotte called Transcend Charlotte— their support group is what got me connected.”

Before the concept was fully thought out for the exhibition, Robinson built a relationship and network with members of the trans community by attending these support groups.

“I’m still connected with the Charlotte transgender community,” he said. “They have these bi-weekly support group meetings every other Sunday and for the past year and a half. I’ve been going to those to talk about the project, but most of the time, it was really just to listen and learn.”

“That’s been another dynamic in this,” Robinson said, analyzing how his gender and sexual identity fits in with an exhibition uplifting trans voices. “I think about, Where is my position? Where is my place in the things that I do? When this project came up as an opportunity, and I looked at what I perceived as a need, you know, and I want to help.”

As a cisgender Black man, Robinson said he has already learned so much about the trans experience and that his motivation for putting this exhibition together stems from his own spiritual journey.

“I was raised Baptist Christian, so that makes things even more interesting. But in the teachings, specifically in the book of Matthews— Chapter 22, verse 37 through 39— it mentions ‘in all that you do love God with all your mind, heart and soul. And Love your neighbor as yourself,’” he said. “The first step in loving your neighbors or self is first getting to know them, and getting to learn about them.”

“I want to help by acknowledging, I’m not of this community, and I know that there is some learning that I have to do,” Robinson continued. “In all of this allyship I’ve been learning is for one, don’t expect the person or the group of people that you’re trying to support to educate you. You need to go out and do your homework.”

That is when he asked Americo to join as co-curator and called on his mentors, Edie Carpenter, Vanessa Bamber and Roy Carter, for help. Since 2016, North Carolina became infamous for passing its controversial House Bill 2, AKA, the “Bathroom Bill” which actively discriminated against trans people (particularly trans women) for using the restroom that best aligned to their gender identity.

Americo, 35, is a queer, Indigenous, Latinx musician, journalist, and trans civil rights activist who now lives in New York City but lived most of her life in North Carolina. According to a 2017 Mother Jones article by Samantha Michaels, Americo realized she was trans when she was 29 years old, which was around the time the Charlotte City Council passed the nondiscrimination ordinance that would allow trans people to use the bathroom of their choice.

“I testified in support of it—that was when I began to be public about being trans,” Americo told Michaels in Mother Jones. “When it passed, it felt like we were finally going in the right direction. But then North Carolina lawmakers started considering HB2 [which blocked Charlotte’s ordinance]. I testified at the Senate, begging them not to, but they did.”

Americo is also known in Charlotte as the former co-owner/founder of the nonprofit Comic Girl Coffee and Books, which unfortunately closed its doors last year.

“Comic Girl Coffee was a shining gem of diversity and authenticity,” Americo told YES! Weekly via email. “I will always miss it, and all the victories achieved there. Being a shop run by marginalized people, centering marginalized stories in the South was an accomplishment. We were around for two years, and I believe quality is much more important than longevity. I hope that it can live on as proof that the pay it forward model can work and safe spaces are needed. Every week we would have people come by from different regions and states just to be in a queer/POC space.”

Americo wrote that she learned to be “fearless in the face of people” who didn’t think she should exist during her time living “beyond the binary gender” in North Carolina.

“Manhattan taught me how to be bold in my authenticity— being openly trans in the South turns you into a living-learning experience in most interactions,” she noted. “Most people there have never met a trans person (we are real). In Manhattan, people here have seen it all. It’s all about being the greatest version of your authentic self you can be.”

Americo said she got involved with The Transparency Project to help give other trans artists an accessible platform to share their works. As a trans person of color, she understands all too well how high the barriers are for people like her.

“Being an artist and a trans person, I know how hard it can be to create when you have to focus on survival,” she noted. “I want to help offer an opportunity to showcase trans artists without having to pay application fees or have their art judged by people who may not understand the trans experience.”

Americo wrote that The Transparency Project is important to her because representation matters and this art exhibition has the potential to be a learning experience for others.

“Cisgender people and white people often have trouble realizing their privilege,” she noted. “If you have a favorite artist, there is a good chance they are funded by their parents, some cisgender/white entity, or some other form of generational wealth. Seeing Black, Brown, queer, disabled, immigrant, or any other marginalized group making art is a gift. You’re seeing their pain being transformed into beauty.”

Americo said the common thread that transgender artists share is their “unique perspectives on gender.”

“Which is something that influences every part of our lives— we don’t have to follow the rules because we don’t fit into the standard. We break the standards and teach people to be free,” she wrote. “People need to see trans art,” she replied when asked what she hopes spectators will take away from this exhibition. “We are under attack. We are being erased. Our art is proof of our existence and our resistance.”

Shortly after Gov. Roy Cooper took office, he and Republican state legislators compromised and passed H.B. 142, which was deemed the so-called repeal of H.B. 2. LGBTQIA+ activists scoffed at this replacement bill because of Section 3 of the bill, which states, “No local government in this State may enact or amend an ordinance regulating private employment practices or regulating public accommodations.” However, this section is set to expire on Dec. 1, 2020. But Americo doesn’t think the state’s problems with H.B.2 or it’s replacement will end on Dec. 2.

“I think the biggest problem in North Carolina is the horribly gerrymandered election map,” she wrote. “State legislators literally cannot lose their seats because of the way lines are drawn. For positive change to happen, deeply conservative parts of the state would have to switch party lines. In my opinion, all these systems are broken, and I think a revolution is happening— this is the only way real change will come, and things like bathroom legislation won’t be necessary. I think this is the true message of art. Freedom.”