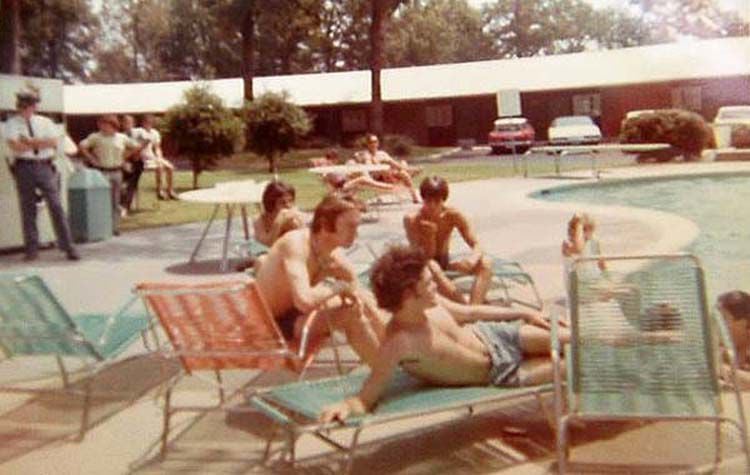 When No. 1 drive-time deejay Dusty Dunn cued up “Pleasant Valley Sunday” for the very first time on July 12, 1967, the tune soon rocketing to No. 3 on WCOG’s (“Go Go 1-3-2-0!”) pop chart, he was well aware the artists that recorded that single, The Monkees, were swinging somewhere in Greensboro. He and almost everyone else in town were desperate to discover just where they were.

Dunn’s echo-enhanced voice encouraged listeners to ring up the station if they had any clue where the nation’s pop sensation of the moment was holed up. As it turned out, it was at Oaks Motel on Summit Avenue.

Tip-toeing into Greensboro in the pre-dawn hours with an entourage of 30, the “Pre-Fab Four” was accompanied by an unlikely opening act, The Jimi Hendrix Experience. No doubt the oddest pairing in music history, one the legendary guitarist likened it to, “Putting Dracula with Snow White.”

Micky Dolenz and Peter Tork, impressed by his concert at The Monterey Pop Festival, added Jimi Hendrix to the Summer of Love’s hottest ticket. Considered a big break for The Jimi Hendrix Experience, they joined The Monkees’ American tour that kicked off four nights earlier in Florida.

It wasn’t going well, with hordes of hysterical teeny-boppers pleading for Davy Jones throughout Hendrix’s set that included searing performances of “Foxy Lady” and “Purple Haze.” The night before in Charlotte, he rested his guitar against an amp and walked away in disgust before finishing his set.

Police knew where The Monkees were staying and two GPD officers had been assigned to protect them. They were largely responsible for a couple of dozen fans milling about the courtyard as Peter, Micky, and Davy lounged around a pool shaded by tall trees.

Dressed for his appearance that night at the Greensboro Coliseum in black crushed velvet pants, leather boots, an orange brocade silk shirt and a string of wooden beads draped around his neck, Hendrix spent that hot, humid Wednesday afternoon in his air-conditioned room with a six pack of Bud, strumming Beatles tunes.

After a swim and pictures with excited youngsters who’d snuck their way onto the compound, Micky and Peter met up with Michael Nesmith in his room. Hendrix joined them, sat on the edge of an unmade bed, picked up Nesmith’s guitar (one the sitcom star had just learned to play) and jammed for the assembled who looked on in amazement.

Later that evening, two persistent fans waved down a limo cruising up High Point Road. They then found themselves ordering barbecue platters with a “very polite and kind of shy” Hendrix at Stamey’s.

That night, Hendrix was booed by some but that was countered by a contagiously enthusiastic reception from hipper audience members who came to see him and not the headliners. Kids even rushed the stage, which hadn’t happened before. Concert-goers were rewarded when, for the first time since shocking audiences in Monterey a month earlier, Hendrix demolished his guitar at the end of the performance.

With no air conditioning in sweltering heat, it took 80 policemen surrounding the Coliseum stage to hold the line against a screaming wave of bubblegum zombies, an unrelenting din drowning out The Monkees’ entire act with girls reaching, pleading for something unimaginable.

Exiting the Coliseum for the airport, The Monkees and Jimi Hendrix Experience boarded a private plane emblazoned with the T.V. show logo for a champagne flight to New York where Hendrix quit the tour abruptly after three more dates, storming offstage, allegedly with his middle finger extended, while adolescents chanted, “We want Davy!”

It was all good, the performers had nothing but love for one another. Tork remarked about hanging out at the Oaks with Hendrix in a Youtube video found in the North Carolina section of the Forsyth County Public Library website (www.northcarolinaroom.wordpress.com/2014/05/13/monkee-shines-in-the-triad/). “He was such a sweet guy that it was really just a pleasure to have him around for company. His air of, ‘Everything’s all right. Things are cool. It’s okay,’ just made you relax just to be around him.” Hendrix debuted on the pop charts with “Purple Haze” mere weeks after leaving the tour.

Oaks Motel is a modern day reminder of the California resort-like lodging that was all the rage back when babies were booming. The kidney-shaped pool has been filled in with dirt and trees planted where once Monkees’ knees were planted.

Too busy singin’ to put anybody down, Billy Ingram is the author of five books including Hamburger², a book mostly about Greensboro.