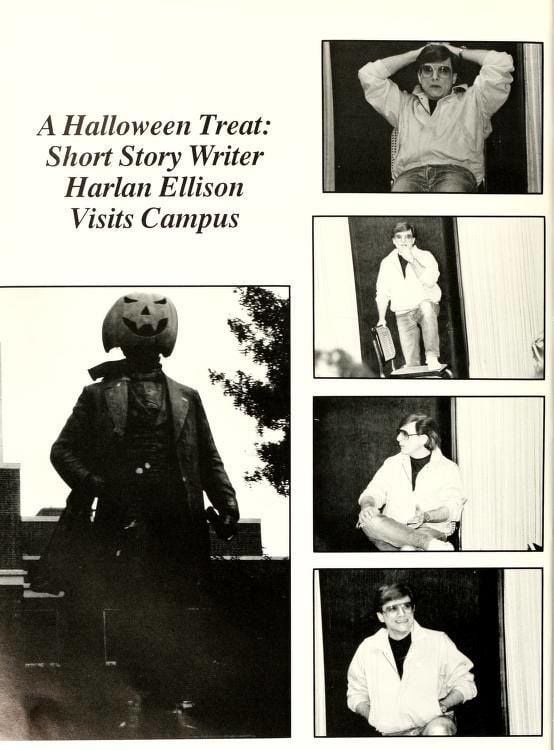 Most obituaries of the notoriously irascible Harlan Ellison, who died in his sleep June 28 at the age of 84, called him a “sci-fi writer.” The man I idolized when I was 18, hung out within Greensboro when I was 28 and yelled at when I was 34 didn’t react well to that label. He hugged me when I called him a vulgar epithet later frequently uttered on HBO’s Deadwood, but “sci-fi writer” might have gotten me a bloody nose.

You were more likely to be punched for that than the anti-Semitic slurs that he, like Lenny Bruce, applied to himself and allowed some friends, even a few goyim, to call him. Nobody called him a “sci-fi” writer to his face, not more than once. When he spoke at the University of North Carolina at Greensboro in 1986, the contract stipulated that using that term in publicity (or mentioning the episode of Star Trek he won a Writer’s Guild Award for scripting) was a deal-breaker.

The slang diminutive offended him more than its meaning. Greensboro’s Fred Chappell remembered him as a teenaged contributor to science fiction fanzines, and with the exception of one early story about racism that received praise from Dorothy Parker, much of Harlan’s literary acclaim was in that field. But he despised the term “sci-fi” almost as he despised the editor and agent who coined it.

Even though I only spent maybe 20 total hours in his company and last saw him 20 years ago, I’m going to call him Harlan. Once a man infamous for verbal (and sometimes physical) assault responds to being flipped off with both hands by laughing and hugging you, you’ve got to call him by his first name.

Unlike Kurt Vonnegut, who also resisted the genre label (and whose fiction Harlan disliked); he respected SF (still the preferred abbreviation for many writers and readers) and was considered one of its major talents. But he claimed, not without justification, that he was really a fantasy writer, or better yet, just a writer. Despite his lifelong friendship with Isaac Asimov, their work had little in common. The genre giant he felt himself most comparable to was Ray Bradbury, another fantasist marketed as a science fiction writer. If Harlan’s friend (and fellow Bradbury fan) Neil Gaiman had begun his esteemed career a three or four decades earlier, Harlan might have compared himself to Gaiman as well.

In the last few decades, several people I trust have told me about their own personal experiences with a less admirable Harlan than the kind and gracious man I knew. I wasn’t actually serious when I called him an asshole, but he sometimes was one. The editor Jonathan Strahan recently said on Facebook that all stories about Harlan are true, even the ones that aren’t.

But, as he was for many science fiction, fantasy and horror readers and writers of my generation, he was my Hunter S. Thompson (a writer he disliked even more than he disliked Vonnegut), my fearless macho truth-teller, and the writer I most wanted to be like and knew I never would. I grew out of that before some of his admirers did, but can never not love him, even though I’ve not read his work in decades. When I was a teenager, I fell under Harlan’s mercurial spell via not only his fiction and criticism and autobiographical essays (some of which were also fiction) but the spoken-word recordings that revealed him as a great reader and better talker. I was still in awe of him when I heard him speak at Carolina in 1985. Along with my fellow UNCG Media Board members Dawn Nubel and Mark Corum, I persuaded the administration to get him here for the University Concert & Lecture Series on Oct. 31, 1986.

We were really hoping he’d see some drunken students coming in through the windows like he had at Carolina’s Memorial Hall, and yell, as he did there, “look at these putzes sneaking into a free show! You sure raise some dumb motherfuckers here in North Carolina!” Nothing that inflammatory happened, although Harlan spoke passionately against Jesse Helms and the since-repealed North Carolina Obscenity Law that led my film professor Anthony Fragola to stop teaching his Fellini and Bertolucci class out of fear of being arrested.

We dined with Harlan at George K’s, where he lectured us on how steak should always be well-done (was that the first time I realized he could be extremely wrong about something?), and at Ham’s (he liked the model train) and took him to Acme Comics in its old Elm Street location. No sooner had he walked in, he and manager Jim Amash started exchanging anti-Jewish and anti-Arabic slurs, scaring the Hell out of fanboys who didn’t realize the Jew from Ohio and the Palestinian-American from North Carolina weren’t actually going to fight, but immediately liked each other and were having their own brand of obnoxious fun.

I didn’t see him again for a decade, although we talked on the phone about how a former friend of mine falsely claimed that Harlan had praised his novel and bought a story from him for the legendary (and never to be published) anthology The Last Dangerous Visions. Harlan immediately offered to come to come to North Carolina “and knock the fucker out.”

The next time I saw him was at the World Fantasy Convention in Minneapolis in 1992, where I’d been instructed to accept Fred Chappell’s award if he won (he did). My first novel wouldn’t be published for another four years, but parts of it had appeared in Asimov’s Science Fiction and Amazing Stories.

Almost everybody mistook me for the Irish science fiction and fantasy writer Ian McDonald. It didn’t help that my Asimov’s story, which had been reprinted in anthologies and shortlisted for an award, was titled “Son of the Morning,” and that McDonald had just published his novel King of Morning, Queen of Day.

When I ran into Harlan, I was already fuming about having been called Ian McDonald over a dozen times, including once by the editor who’d reprinted me (along with the Rhino’s Scott Yost) in The Year’s Best Horror Stories. Harlan was with his delightful \wife Susan, and he insisted she’d been talking on the plane about what a great writer I was. I was skeptical and asked Susan if this was true. Turned out she’d meant Ian McEwan.

Harlan went into his rarely-seen embarrassed mode and started apologizing profusely. I said, “it’s okay, [Very Famous Name] is a friend, and he just introduced me to his wife as Ian McDonald.”

Later, the writer Poppy Z. Brite took me to meet Richard Curtis, who was both my agent and hers, but whom I’d never met in person. Richard was speaking to Harlan, who turned around with a big shit-eating grin and crowed “you mean you’ve signed that damn fine writer IAN MCDONALD!”

I cussed Harlan out and shot him the two-handed bird. The tiny but famously strong man nearly crushed my ribs in a hug. “Got you, asshole,” he said laughing while blowing me a close-range kiss. Suddenly, I no longer hated Ian McDonald for having a surname so similar to mine. Without it, I wouldn’t have that story, which even then I knew I’d be telling as long as Harlan was alive.

But not after he was gone, as a world without Harlan being kind or obnoxious or both at once somewhere in it didn’t seem possible. It still doesn’t.

Author’s note: Reader “Vint” may not be the only one to find my claim that Harlan “disliked” the fiction of Kurt Vonnegut puzzling. In retrospect, I do, too. Harlan not only included Vonnegut’s story “The Big Space Fuck” in his 1972 anthology Again, Dangerous Visions but, three years earlier, had praised Slaughterhouse Five in an L.A. Times review. I didn’t know about that review when I heard Harlan express a negative opinion of Vonnegut’s work in George K’s, the restaurant connected to the University Inn where UNCG had put him up for the night, but I’d read his complimentary remarks about Vonnegut in his anthology. I regret not asking why he’d changed his mind. But this was light dinner conversation, not an interview, I was intimidated at meeting my idol, and he’d already gotten testy when I tried to correct his claim that the artist Howard Chaykin, whom he’d been ranting about earlier, had depicted the title character sticking a gun in the heroine’s mouth in a recent cover for DC Comics’ The Shadow (the gun was held to her head and the person doing it was Lamont Cranston, who in this iteration was not the Shadow’s real identity, but an evil man he’d impersonated). I may have kept my mouth shut because I felt fairly ignorant of Vonnegut’s work, having only read Cat’s Cradle in high school and never actually having read the story in Harlan’s anthology (although I read both the foreword and the afterword). So it wasn’t like he was attacking someone sacred to me. Harlan being Harlan, he was soon off on a tear about something else, and it never came up again.