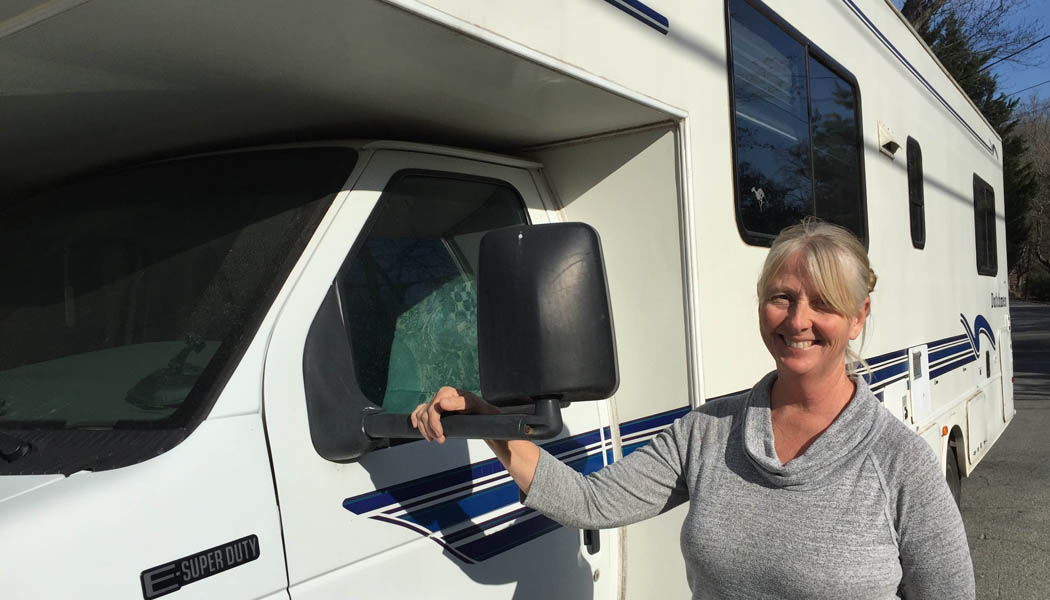 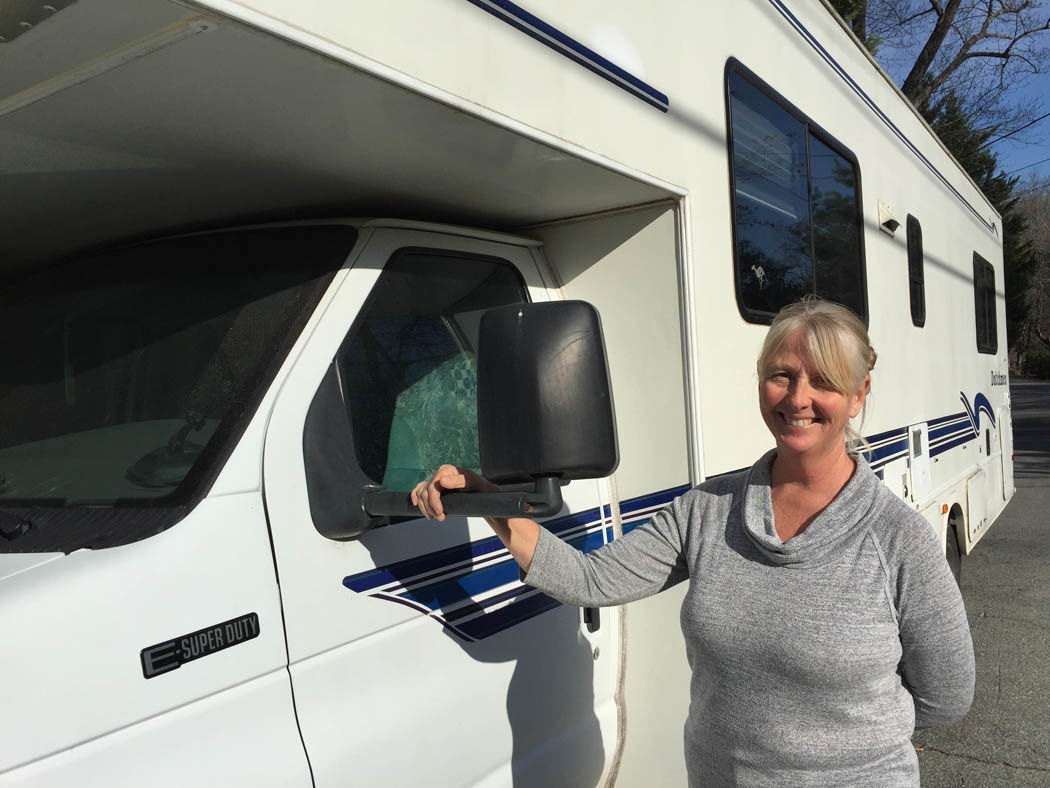 Katie Darnley posing with her new R.V. She plans to move to Wilmington with it. 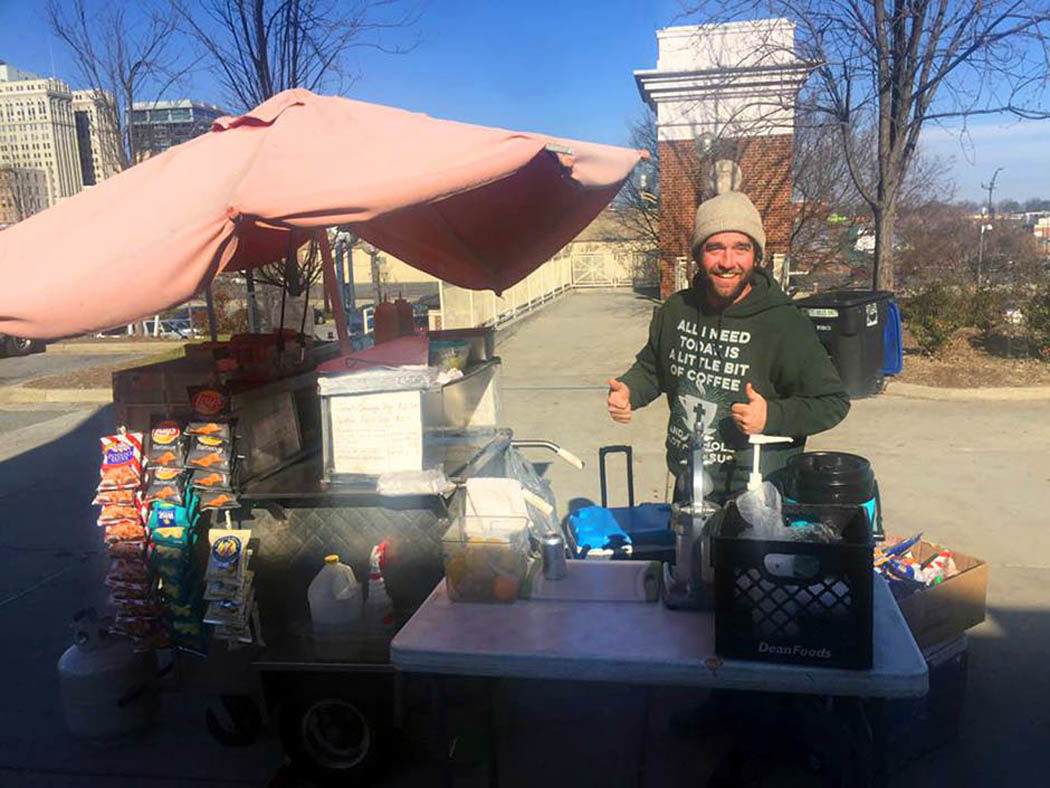 Grady Riddle, Darnley’s assistant who is taking over her post and business. He plans to raise money to help feed the homeless though hot dog sales. 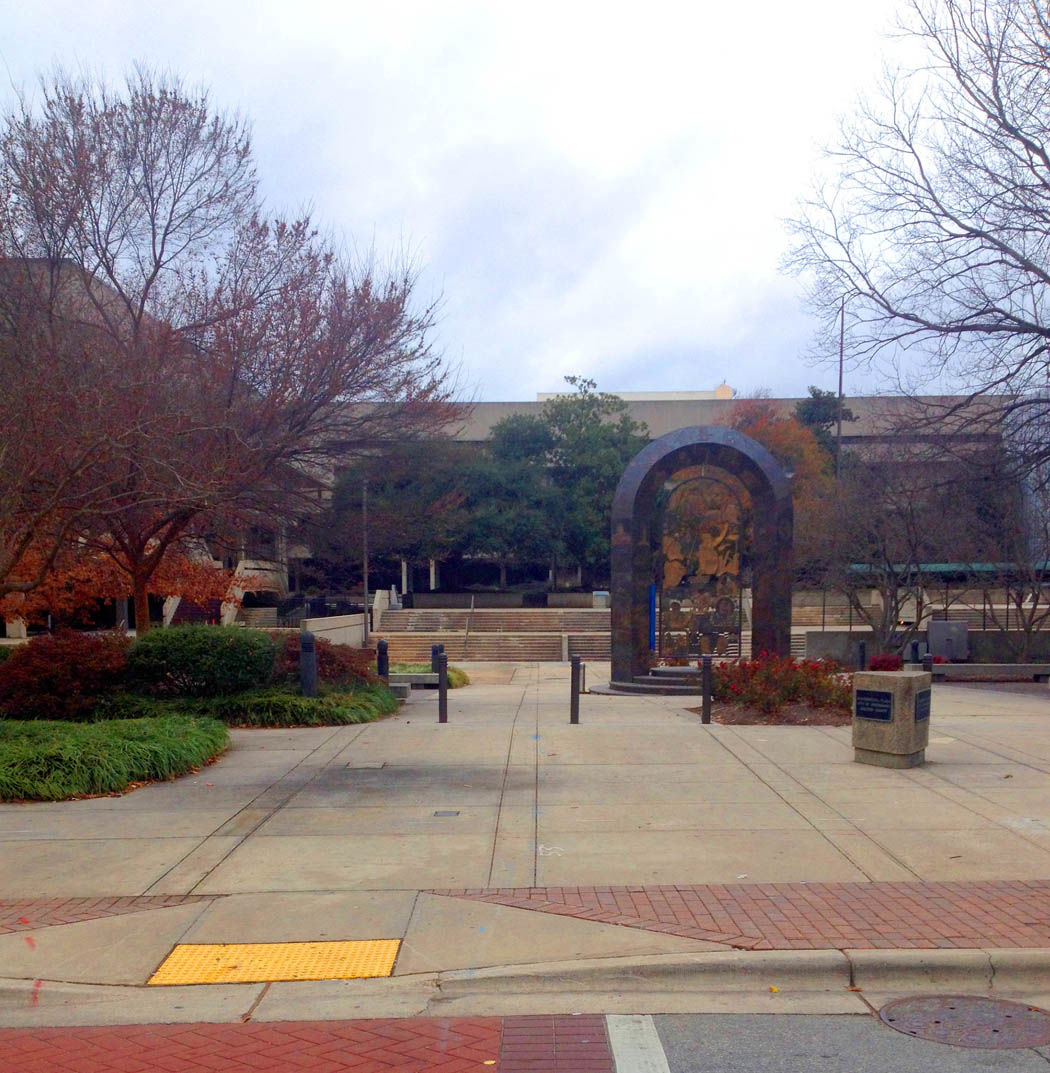 Governmental Plaza, where Darnley will be selling hot dogs for the last time the first week of the New Year before she moves to Wilmington.

Katie Darnley posing with her new R.V. She plans to move to Wilmington with it.

Grady Riddle, Darnley’s assistant who is taking over her post and business. He plans to raise money to help feed the homeless though hot dog sales.

Governmental Plaza, where Darnley will be selling hot dogs for the last time the first week of the New Year before she moves to Wilmington.

After establishing herself, for over a quarter of a century, as the faithful Hot Dog Lady who, downtown Greensboro regulars came to rely on for red hots and a smile, Katie Darnley planned on tip-toeing out of town with little notice or fanfare. To allow that would belie her beloved status.

“When I met my husband, Fred, he had a hot dog cart in Louisville, Kentucky,” she said. After moving to Greensboro, “We decided to see if we could do anything here with it.”

Serving the public with relish, she was unknowingly carrying on a long-standing tradition; as hot dogs and downtown Greensboro go together like moose and squirrel. In the 1930s, restaurants on the corner of South Elm and McGee competed for which diner prepared the tastiest frankfurters — that’s how that intersection became known as ‘Hamburger Square’ (go figure!). Guilford Soda Shop, a canteen situated in the lobby of the Guilford Building for 60 years, was renowned for serving the finest hot dogs the Gate City has ever known. After being gone for two decades, folks still rave about them.

As for the actual year Darnley first put her wheels down downtown, “I feel like one of my licenses says 1992,” she guessed. “I’m not exactly sure anymore, I’ve lost track of time.”

During that period, Greene Street served as a hub for city buses, and Darnley said it was the perfect spot. “The buses arrived there, the courthouse was there, everything was there.”

When The Depot was renovated and expanded to accommodate bus service in 2003, Darnley decided to split up and have two carts.

“At first they were hesitant to let anybody sell hot dogs up there, but we persevered,” Darnley said.

From the beginning her chili was made fresh every day by her husband Fred; at some point, she added sausage dogs and fresh squeezed lemonade.

Darnley’s very presence has rescued many on-the-go lawyers and law enforcement personnel who otherwise wouldn’t have time to stop somewhere to knosh. She said she is still a bit amazed when someone, “Comes up and says, ‘I used to come up here with my grandfather when I was 6, and now I have kids of my own.’”

“When we started, Woolworth’s was still Woolworth’s,” Darnley said. “My children would come downtown, and there was this homeless gentleman who was very nice, he actually kept my kids.They’d call him Uncle Joe, and he would take them to Woolworth’s, get them something to eat, then bring them back. It’s funny how you get to know people.”

Almost 20 years ago, Darnley took on an assistant, Grady Riddle. He was 16-years old at the time and was dating one of her daughters. “It was kind of like, ‘You want some work?’ He’s been my go-to guy; he helps me with everything.” Riddle has been lunch-wagoning ever since, with breaks that included tours of duty in Iraq and Afghanistan with the Marine Corp.

From his vantage point at The Depot, Riddle has seen his share of craziness.

“A naked man attacked the hot dog stand once,” he said. “He was wearing nothing but tennis shoes and a hat. It freaked me out; this naked guy’s yelling ‘It ain’t Christmas!’”

Darnley, too, has witnessed disturbing events.

“The craziest thing that ever happened was a friend of Grady’s got knifed in front of the hot dog stand, that was not good.”

Situated next to BB&T, she’d even grown accustomed to the numerous armed holdups taking place within steps of her stand.

“In the last couple of months there was a bank robbery where apparently the guy went right past me, but I had no way to know,” she said.

Fear not, nitrate lovers, as long as there’s demand, Riddle will invariably be perched at the intersection of February One Place and Greene Street while his associates service commuter traffic at The Depot. He’ll be running things now, and everything will be the same. “I’ll just be doing this without Katie for the first time,” Riddle said.

Their base of operations, located behind Schiffman’s, is a former welding shop dating back to the Roaring ‘20s that withstood devastating 1980s Davie Street infernos. However, it is unlikely to survive the current parking deck boondoggle. Until then, Riddle plans on sharing the facilities with other vendors.

“If a food truck needs a legal commissary to work out of, I’m hoping to rent space to them, just to help local businesses.”

He’s not planning culinary changes right off the bat, but Riddle has initiated a pay-it-forward program to, in some small way, help ease the burden of the less fortunate.

“I turn down so many hungry people every day, I just can’t afford to feed everybody,” he said. “I saw a posting on Facebook where a pizza shop in Chicago was allowing customers to pre-purchase food for the needy. I just took that idea, so that if someone pre-purchases a hot dog when a person comes by later in the day that has no money, I can say I have a hot dog I can give you now.”

Besides on-site customers who participate, he’s also raising awareness through social media and has given away 400 meals in the first week.

“I just got a pretty sizable donation, so I plan to find a location where there’s a concentration of homeless people, then I can feed them all at once,” he said.

Darnley’s happily unconcerned about the future, for now, she said. “Maybe more hot dogs with a question mark? In a year or two, I might do some festivals and things like that but not day-to-day, Monday through Friday.”

What’ll she miss the most? “My customers. Sometimes I don’t even know their names, but I definitely know faces,” she said. “I have a lady who will call me up and say, ‘Are you there?’ I know what she wants so I can have it ready for her. There are a lot of people who’ve known me forever, and I’ve seen them forever, so I’ll miss them.”

However, Darnley won’t miss Greensboro’s weather. “The wind is bad, rain is bad, cold is bad,” she said. “You can do cold when it’s sunny. If it’s not pouring, you can do rain as long as it’s warm out. You just can’t do wind and rain.”

As for saying goodbye, “I really haven’t told many people, I found it difficult,” she said. The Friday before Christmas, Darnley and her husband bought an R.V. and plan to hit the road for Wilmington to start a new life. “My children and grandchildren are there, and I miss them terribly,” she said. “I needed to make some sort of change, discover new horizons, so to speak.”

Greensboro’s Hot Dog Lady to generations of downtown denizens plans on slinging dogs at Governmental Plaza for a few days during the first week of the new year, a final curtain call if you will. This will be an opportunity for everyone to catch up with her because, frankly speaking, Greensboro will miss her dearly.

Billy Ingram is finishing his 6th book, about his time in Hollywood as part of a team the ad world dubbed, ‘The New York Yankees of Motion Picture Advertising.’