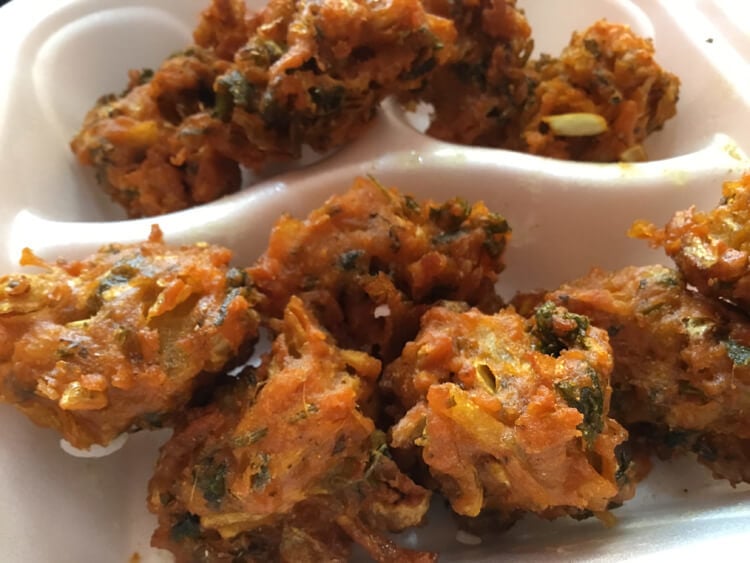 If you eat red meat, go for the goat!

In 2017, Tate Street’s foodscape was looking dire. As reported in “Tate Street Changes: From Desolation Row to Pizzaville,” several longtime favorites had been replaced by chains, and only five of the 12 restaurants offered something other than subs, wings or pizza.

Worse, the then-newest addition to the historic University of North Carolina at Greensboro strip was part of a national pizza chain. Adding to the feeling of increasing corporate homogenization, it replaced a beloved Indian restaurant.

Unsurprisingly, the fifth pizza joint in Tate Street’s 580-foot-long business district is now gone, having actually closed twice in the last two and a half years. In its place is Taaz Indian Kitchen, which despite its plasticware and Styrofoam fast-food ambience, serves some of the best Indian food to be found in the Triad, particularly the naan (bread), tandoori chicken, samosas (turnovers with peas and potatoes), pakoras (assorted vegetables fried in chickpea batter) and goat.

That’s right, goat. I prefer it to lamb, not just because of its stronger flavor, but because it’s served on the bone. To me, meat, poultry and fish are always tastier that way, if messier to eat. I recommend using naan to lift a piece to your mouth and gnaw on it.

There are plenty of chicken dishes, but only the terrific tandoori drumsticks offer anything but boneless breast. But even though that’s my least favorite part of the bird, the fresh spices in Taaz’s curry, korma (yogurt or cream-based sauce), saag (a sauce made from spinach or other greens), tikka masala (creamy, curry sauce), kadhai (Indian stir fry) and vindaloo (curry dish with vinegar and spices) make up for, in my opinion, the bland meat. In fact, this usually unrepentant carnivore prefers the mixed vegetable korma, paneer (cheese) tikka masala, and aloo gobi (cauliflower and potato) tikka masala to their chicken and even lamb equivalents.

Unlike the much-missed India Palace, Taaz has no buffet. However, the new establishment’s superior fresh-baked naan, samosas, and pakoras and the fact that its kitchen includes a traditional tandoor clay oven, would make up for the lack of a buffet even without the sublime goat.

Taaz is open 10:30 a.m.– 10 p.m., seven days a week, and offers an $8 thali (two-entrée) lunch special until 2:30 p.m. every day. While the lunch special is advertised as consisting of either two vegetarian or non-vegetarian entrées with rice, naan and dessert, I’ve found that they’re happy to combine one meat entrée with one vegetarian one.

Most of the $5 to $7 appetizers are practically meals in themselves; add either plain or butter naan to either gobi manchurian (cauliflower sautéed with ginger and garlic) or veggie pakoras and you will have spent $6.95 for either a filling lunch for one person or a light lunch for two. For a dollar more, you can upgrade to cheese or garlic naan or aloo onion kulcha, whole wheat naan stuffed with onions and potatoes (traditionally eaten for breakfast in India).

Owner Raju Pradhan, who told me this is his first restaurant, is actually from Nepal, which explains the presence of momo (Himalayan vegetarian or chicken dumplings), chow mein and fried rice on the menu, as Nepal is bordered by China and India. The $8 chicken or vegetarian momo is served with a creamy tomato sauce and is both the tastiest and most heaping plate of dumplings I’ve had in Greensboro.