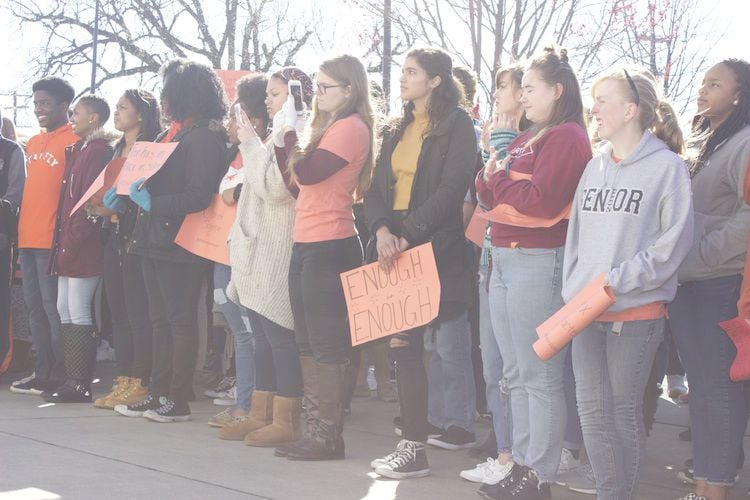 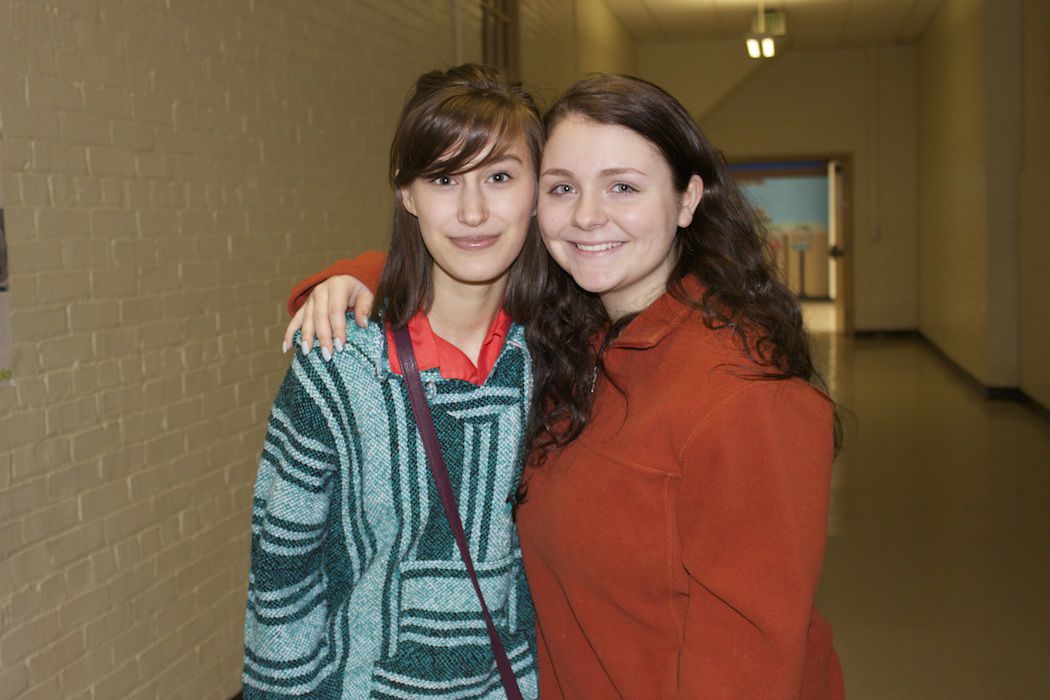 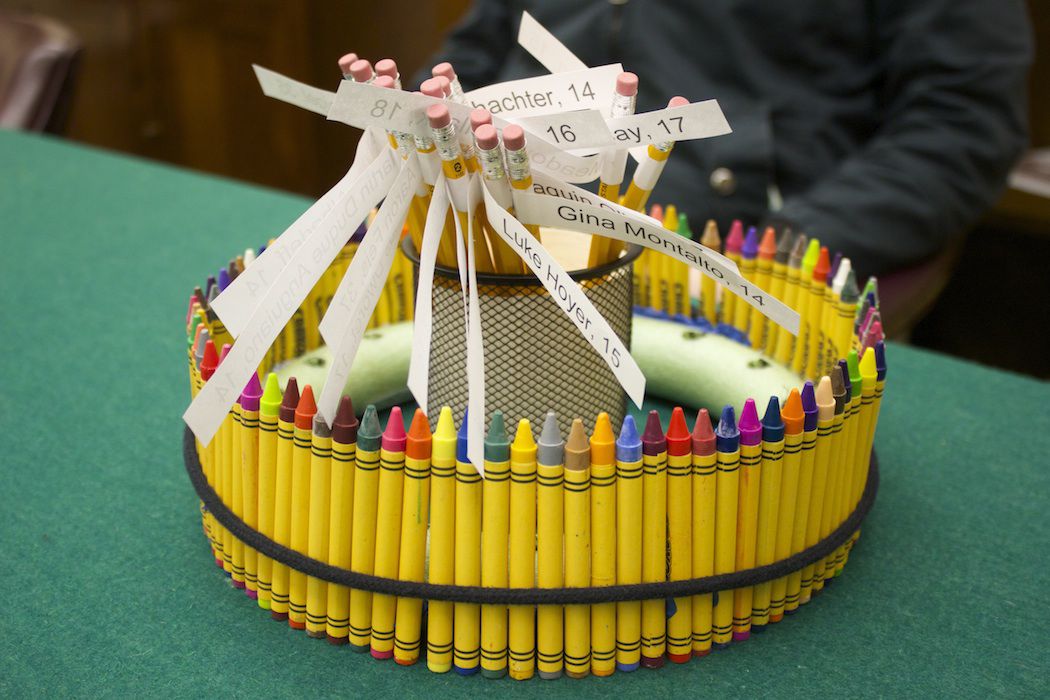 The names and ages of the 17 victims from the Valentine’s Day shooting in Parkland, Florida, on pencils 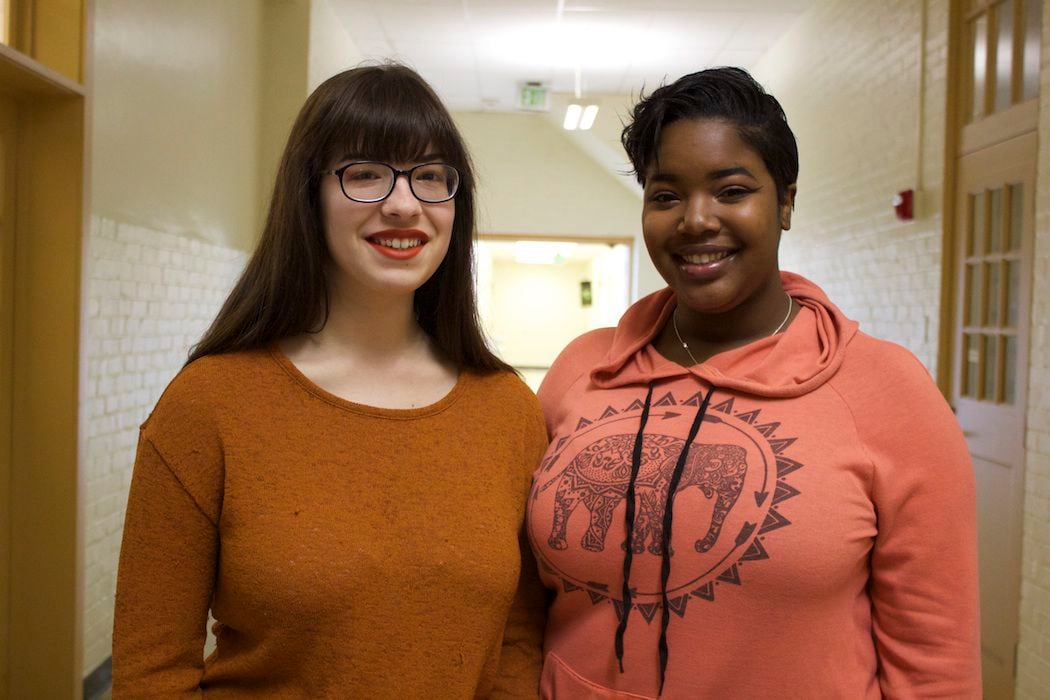 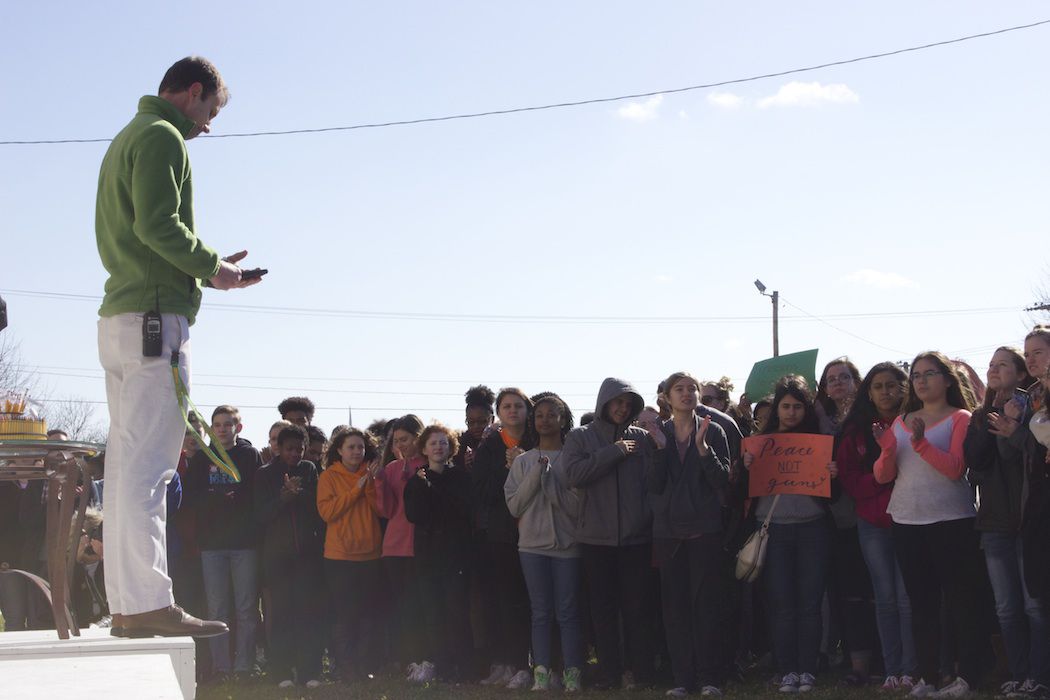 Howard Stimpson, principal of Penn-Griffin addresses the students and leads them in a moment of silence 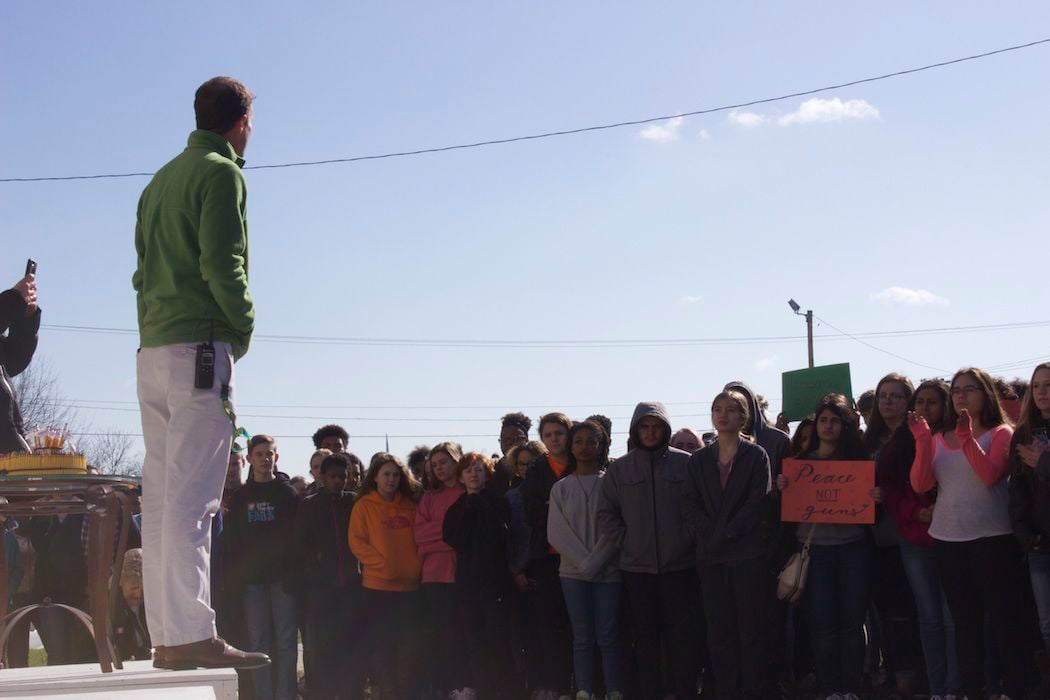 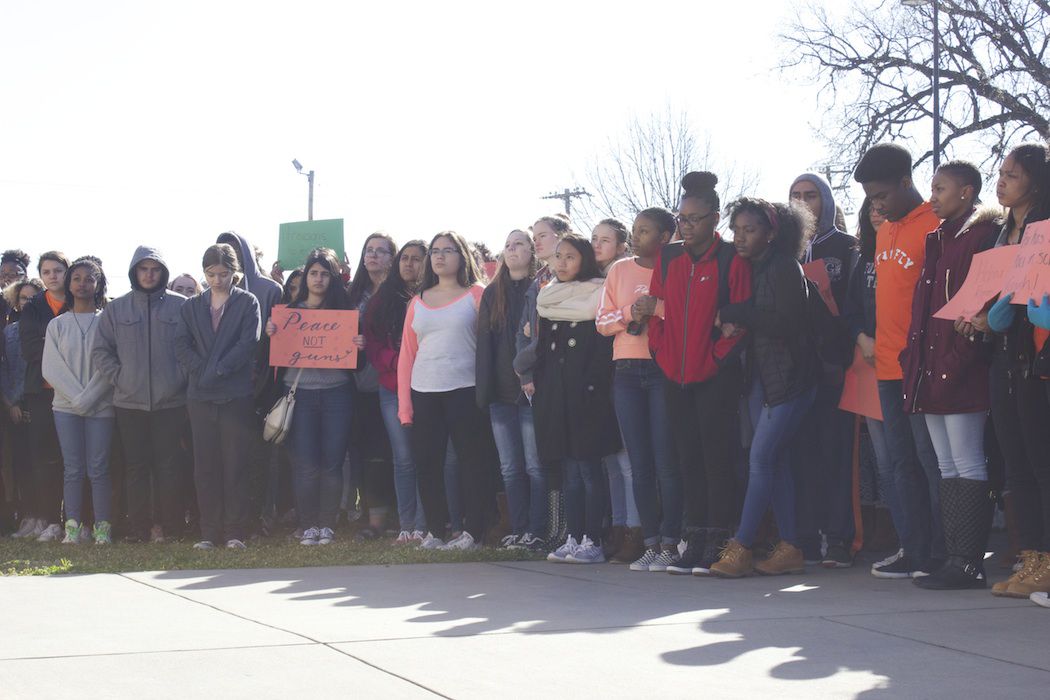 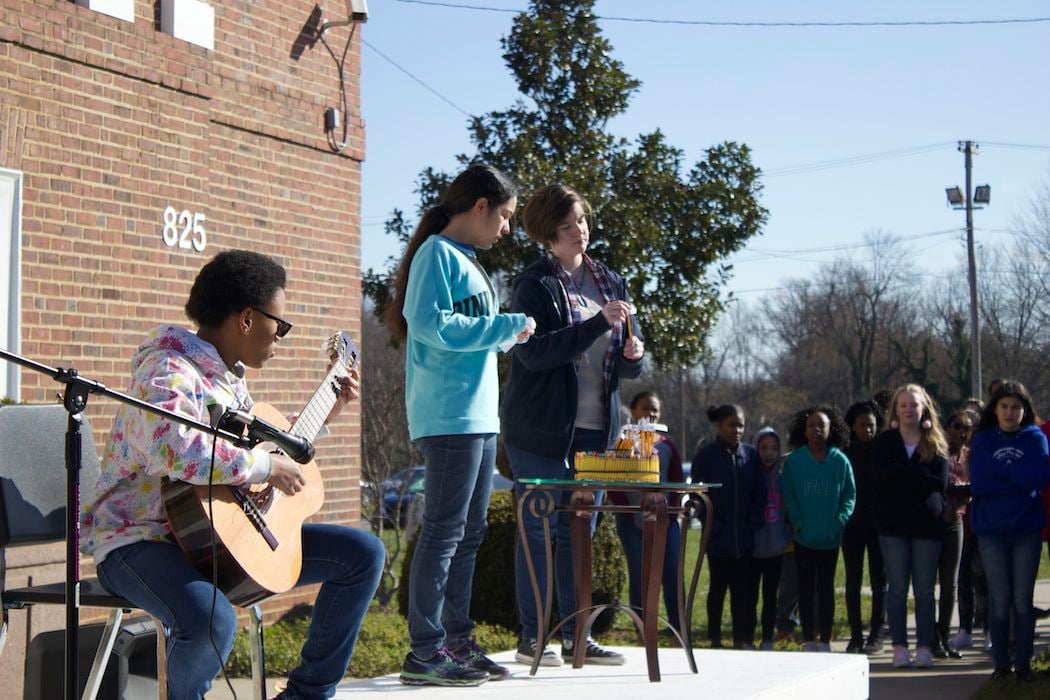 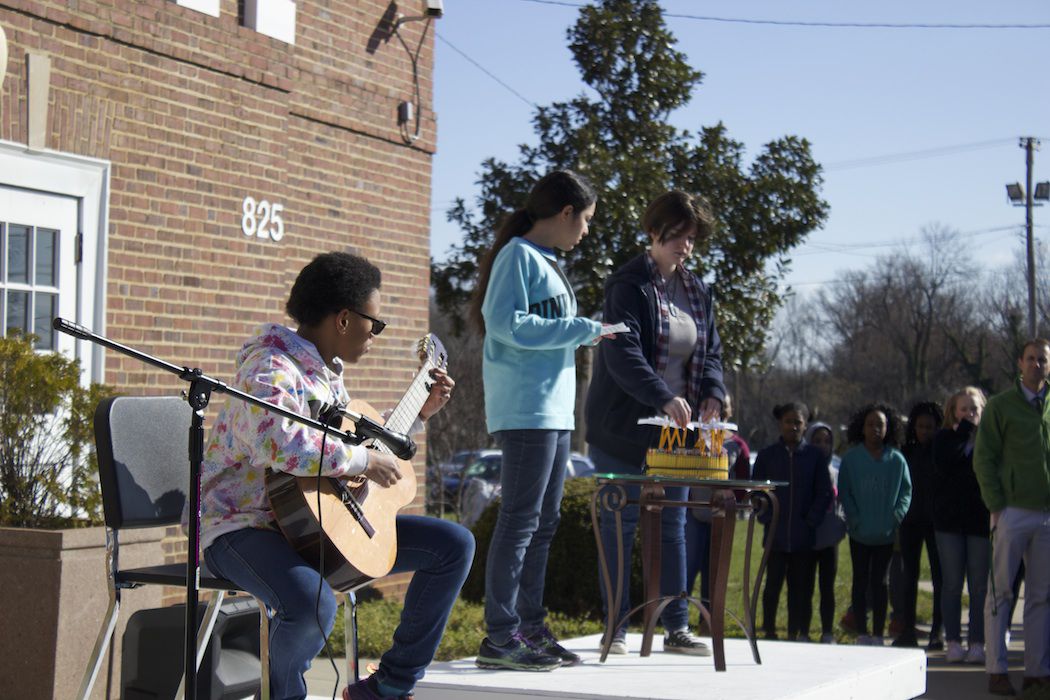 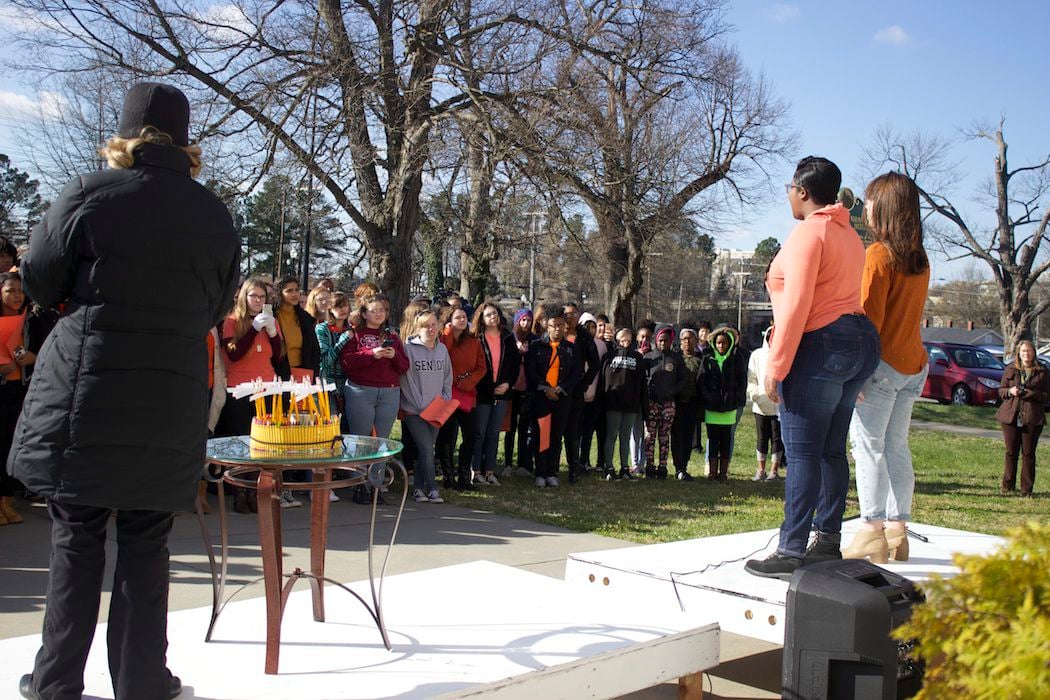 The names and ages of the 17 victims from the Valentine’s Day shooting in Parkland, Florida, on pencils

Howard Stimpson, principal of Penn-Griffin addresses the students and leads them in a moment of silence

*Editor’s note: This article was originally published on March 16 online. It will be published in print on March 21.

On March 14 at 10 a.m., middle and high school students from Penn-Griffin School for the Arts in High Point walked out of class in protest of gun violence. With the most recent school shooting at Marjory Stoneman Douglas High School on Feb. 14 in Parkland, Florida, students across the nation walked out of class last Wednesday in protest and are demanding action for gun control legislation.

The students of Penn-Griffin walked out for 17 minutes in observation of the 17 students that were killed at the Florida high school. Howard Stimpson, the principal of Penn-Griffin, said he met with students Mia Lerner and Victoria Danielik, the co-organizers for this peaceful demonstration, to help them coordinate it. Stimpson said the students organized the entire protest, and he assisted with setting up the stage, microphones and provided adult supervision.

“Our responsibility is to teach them how to be good citizens,” Stimpson said. “We do the standard course of study and all of the things we are supposed to, but we also want to teach them to be good citizens, be civically engaged and they have a right to exercise their First Amendment rights. What I did with this is, I tried to get in front of it so that we could create something that is going to be safe, that is going to be organized and student-led.”

Students of Penn-Griffin went outside in the almost freezing temperature, withstood the wind and held some orange signs that read, “Enough Is Enough” and “Peace Not Guns.” Some carried signs with the Marjory Stoneman Douglas victims’ names and ages.

The demonstration consisted of musical performances, spoken word poetry, reciting the names of victims, reading an open letter to Marjory Stoneman Douglas students and a moment of silence. Stimpson estimated that 250 students participated in the walkout.

“We do a lot of assemblies and things like that around here anyway,” he said. “So from a strictly administrative perspective, the way I looked at it was that it was just another assembly. Except this one happens to be outside, and kids could participate or not.”

Lerner said her and Danielik were in their theatre class when Danielik wrote her opening piece that began the walkout as a spoken word poem about gun violence. They turned the piece into an open letter for the survivors of the shooting in Parkland, Florida.

“It is the students that are really active that allowed us to help organize the event with Stimpson and it was really an incredible experience,” Lerner said. “If it weren’t for people like Tori and organizers we wouldn’t have been able to have the event that we had.”

Danielik said Lerner was vital in making the walkout happen. She said hearing Marjory Stoneman Douglas students’ testimonies inspired her to be apart of organizing the walkout and for being so outspoken about gun violence.

“Seeing all of these kids who like, as I said in my open letter, they snapped back like a rubber band, after a tragedy they stood up, and they spoke out, and they made an impact, they got people talking,” Danielik said. “That is something that I have always wanted to be able to do. I have always wanted to make an impact with my words. They inspired me after such tragedy; I just wanted to lend my hand to them because they are doing that for every child in America who goes to public schools.”

Danielik said her favorite line of the open letter was, “I stand here today not only to tell you that you will dismantle the violence that you had to suffer through, but we will do it together because you are never alone.”

Lerner said the Parkland shooting is often neglected as a tragedy because it has become so shrouded in politics. She said she was inspired to organize the walkout by the outspoken Parkland students and other students who have witnessed school shootings.

“For me as a student with an active voice with capability to speak out and with such a good outlet at Penn-Griffin and with the arts and administration that was willing to work, I feel like if I did not stand up, if we did not organize it, it would be tragedy on my part,” Lerner said. “It would be something that I completely neglected being able to speak out, and I think it would be wrong of me, especially because I do care about it. I am always saying, everyone wants to advocate for something, everyone wants to speak, but no one wants action. And action is so much more important than just being an advocate, being an ally is nothing if you can’t do anything with it. Penn-Griffin wanted to do something with it.”

“We started writing this spoken word or slam poem about a month ago,” Sexton said. “It is just basically against gun violence.”

“And raising awareness for more people to care more about it and not brush it under the rug, and group those 17 people as just people that happen to [die] tragically, but to lobby for change,” Young said.

Young said they both were doing a spoken word unit in theatre class when the school shooting happened a month ago.

“We wanted to incorporate the arts into the performance because that is obviously what this school is and it is an outlet for us to get our message out,” Sexton said. “So that is why we decided to write a spoken word piece about it because that is how we felt our message would have been best delivered.”

Young said her favorite line of the poem that she performed was, “Yes we have the right to bear arms, but when our forefathers wrote the constitution that law was not created with the intent to allow a man to carry a gun beneath his underarm.” She said that people tend to take the Second Amendment argument and “stretch it.”

“I think it is important to go back to the origin and the roots to see what that law was really created for,” Young said.

Sexton said her favorite line of the poem was, “239 school shootings have occurred nationwide. How long will it take for people to open their eyes and realize keeping their guns means putting kid’s lives on the line?”

“Because as we see in other countries especially, they have stricter gun laws and they don’t have mass shootings,” Sexton said. “But in America, we do not have strict gun laws what so ever, or in my opinion, we don’t, and mass shootings keep occurring. So, I feel like people should give up their guns after they see the risk that comes with them to protect children.”

Both Sexton and Young’s advice to their peers who want their voices heard is to “keep lobbying” for stricter gun laws and contact their representatives to voice their concerns.

“Just because you are young, doesn’t mean you can’t speak up,” Young said. “Even though the older generations tend to like, brush it under the rug and tell us that we don’t have a voice, we do.”

Lerner said both her and Danielik are often not taken seriously or heard because of their age (both are 17), but she said they are the voice of the next generation that will lead the world and America into a more peaceful and inclusive place.

“So for us to be silent, is so wrong for us,” she said. “Why would you silence your voice, when your voice is going to become a catalyst for change in the next 20 to 30 years… You need to start now cause if you start later you are not going to know what you are doing.”

“Don’t be complicit in what everybody else is deciding,” Danielik said. “These old people are going to be gone soon, and we’ve got to take the reigns.”

Danielik’s mother, Amy, wrote in an email that her church, St. Mary’s Episcopal Church along with others from the Episcopal Diocese of North Carolina will be attending Greensboro’s March For Our Lives on March 24.

“Our clergy, myself, youth and concerned adults are planning to march,” Amy Danielik Campbell wrote in an email. “Our group plans to carpool in our church van and other vehicles as needed. The following Friday we are holding a Lift Every Voice Spoken Word gathering at All Saints’ Episcopal in Greensboro.”

The Greensboro March For Our Lives begins at 2 p.m. and goes until 6 p.m., according to the Facebook event page. The march is being held “to help support common sense gun legislation and allow your kids a better, safer future.” The march will begin at Government Square and end at LeBauer Park. There will be guest speakers, performances, vendors and food trucks. For more information, visit www.marchforourlivesgso.org/.