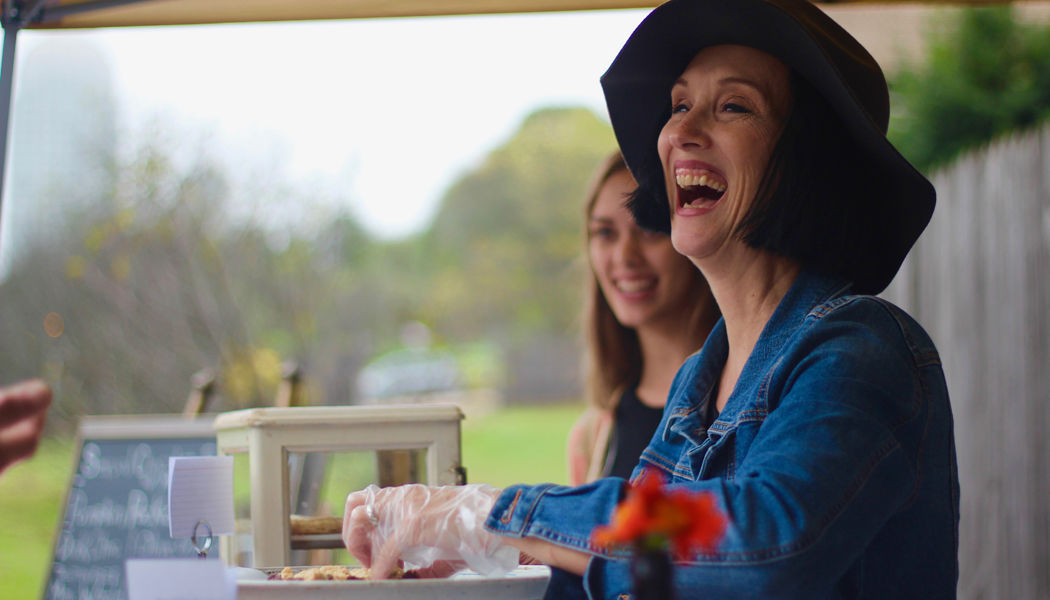 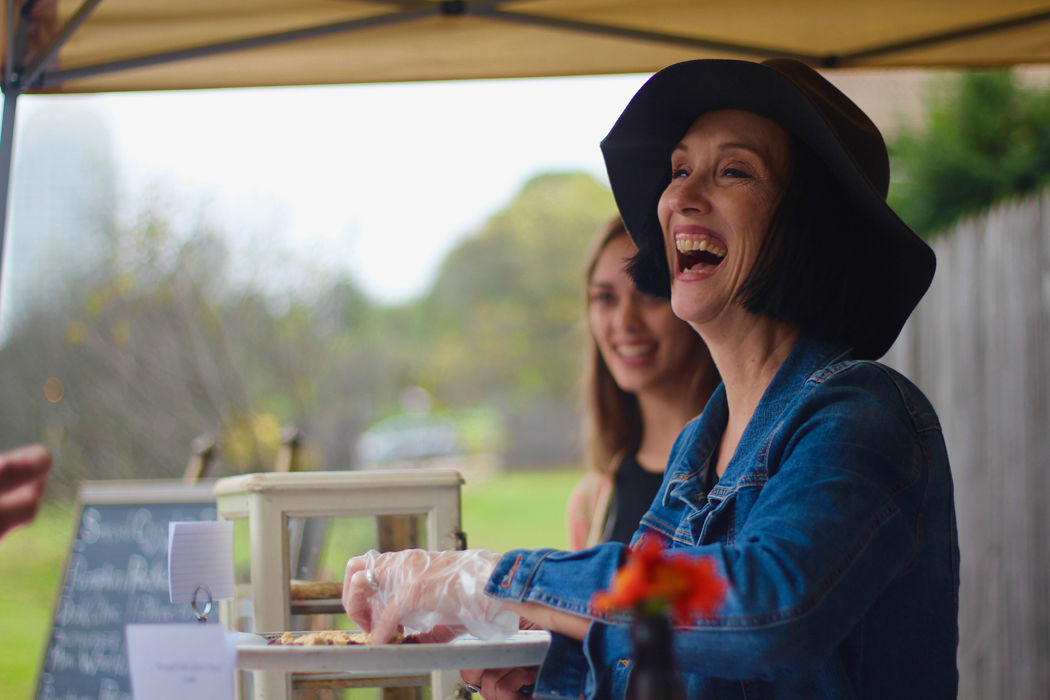 Naomi Gingrich laughing as she hands one of her pastries to a patron on Oct. 13 at Cobblestone Market. 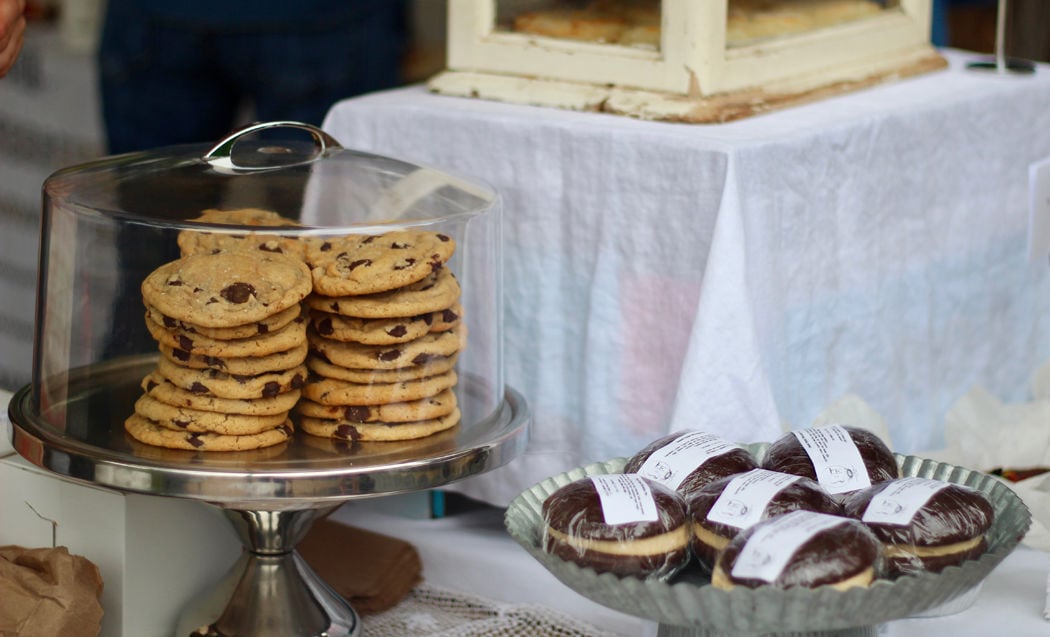 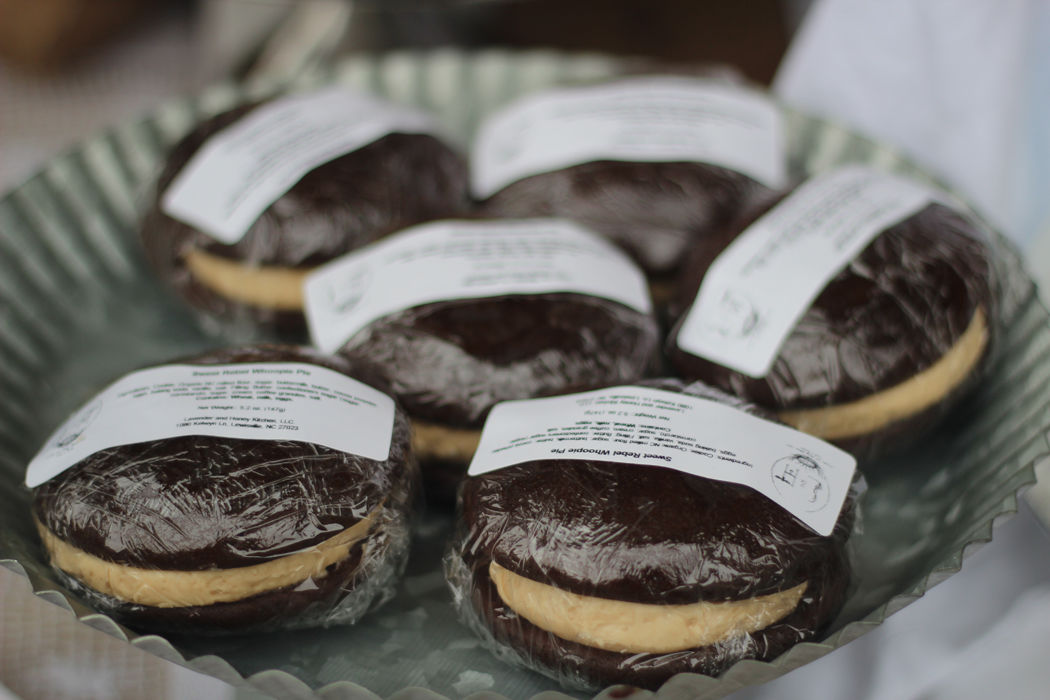 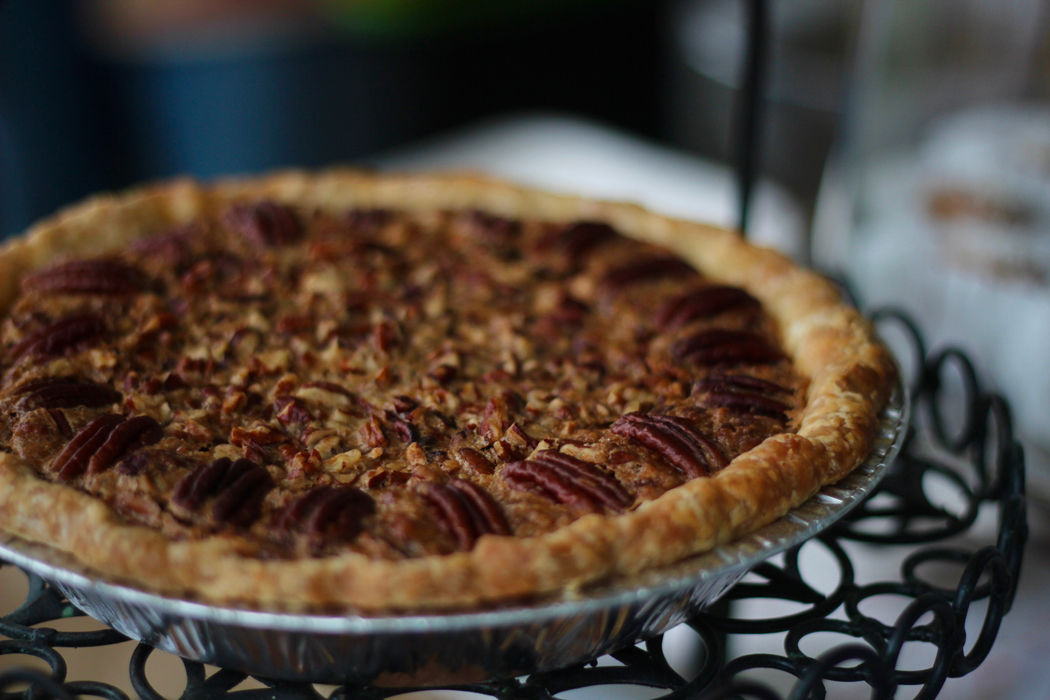 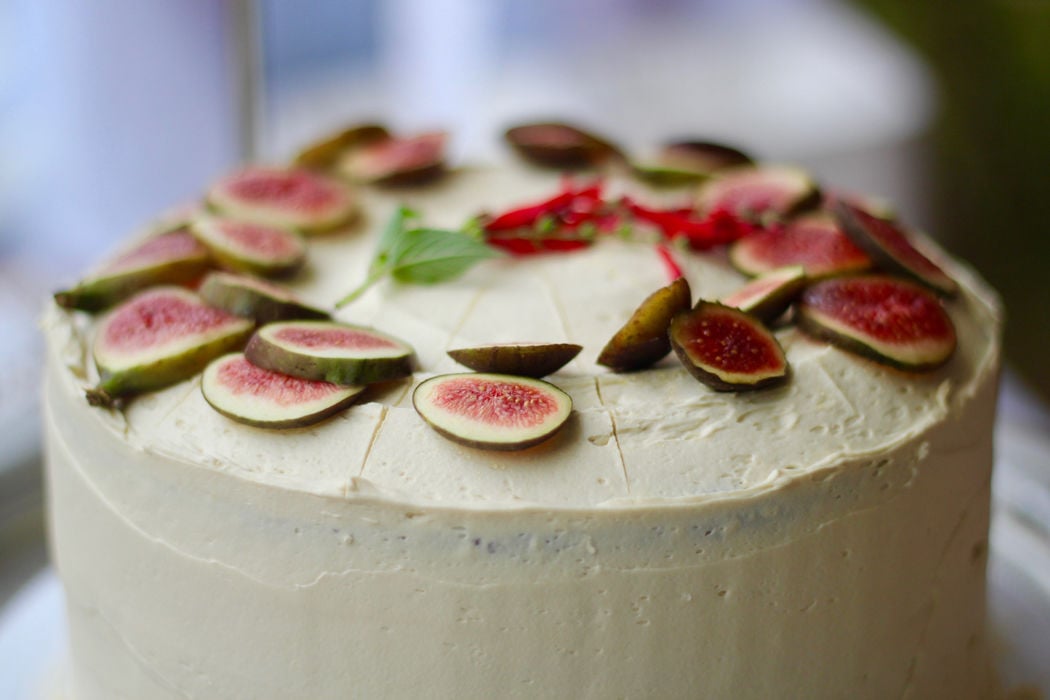 Naomi Gingrich laughing as she hands one of her pastries to a patron on Oct. 13 at Cobblestone Market.

Most commercial kitchens have industrial-grade ovens, several stoves, and if you’re lucky, a stainless-steel Hobart floor mixer, equipped for whipping cake batter and tossing cookie dough. Its mere existence to a baker is equivalent to that of a tractor to a farmer, especially when large quantities of butter, sugar and flour need to be folded together into hundreds of homogeneous recipes.

That specific mixer was the protagonist in baker Naomi Gingerich’s vivid dream back in April. She recognized it to be just like the one from her childhood in her family’s kitchen. Her mother used it to make dozens of loaves of bread and pounds of pie crust for her father’s local market route.

As the dream started to illuminate past the mixer, she recognized a room in her house, turning into what looked like a home bakery office. The mixer was surrounded by shelves on the walls stacked with baking supplies, and before Naomi could see any further, she woke up.

For the entire week beforehand, Naomi had been praying for an idea for another stream of income. After leaving her job earlier this year, she was relying solely on her husband’s salary as an independent insurance adjuster and knew there had to be something she could get her hands into.

Naomi and her husband, along with two daughters and one son, are originally from a small town outside Canton, Ohio, where Naomi was raised in the Mennonite culture. She grew up under the elbows of her mother and father, learning the daily chores of the family farm, but especially getting acquainted in the kitchen with inherited Amish recipes.

In 2007, the Gingerich family moved to Winston-Salem, and in the following decade, her children have grown into their careers and homes elsewhere. Naomi’s oldest daughter, Natalie, moved back to Winston-Salem with no immediate career plans. Both Natalie and Naomi hoped there was something they could do to spend time with one another to potentially earn income while sticking to their values and abilities.

It became apparent to Naomi in recent months that one of her hobbies had become more than just an outlet for her creativity. Her successful food blog, The Cooks in the Kitchen, with over 4,100 followers on Instagram, includes stories about her childhood in the Amish community and heritage recipes that have a modern twist.

With her extensive cooking knowledge and desire for a new purpose, she envisioned the idea of selling her homemade baked goods rather than offering the classic recipes for readers to make themselves.

That’s when the dream occurred, and she confessed the clarity of it to some of her friends, solidifying the plan of opening her own pop-up bakery.

“I just kind of casually said, ‘What if I started a bakery, ha ha ha!’ almost laughing,” Naomi explained. “I have a friend in Ohio who owns two restaurants, and she started out with a home bakery. She said ‘you know, that’s not really funny. That could be very possible for you to do.’”

Her friend was persistent. “What do you do every day?” she asked. Naomi responded, “I bake every day.” “Think about that. Maybe that’s an idea from God,” the friend told her. Naomi allowed herself to imagine it, letting each thought and doubt mix into a recipe for success, but she knew her initial doubts would have to be addressed.

Naomi sat down with Gwen Roach, a local friend, and owner of Winstead Farms, who sells her products at the Cobblestone Farmers Market in downtown Winston-Salem. It was Naomi’s ideal location to start a pop-up bakery in the community, and she hoped Roach could offer some insight as to how to get started.

Naomi expressed her ideas and doubts to Roach, who ultimately gave her the truth and opportunity she needed. “You’re overcomplicating it,” Roach said. She explained to Naomi that she had solid ideas for her products, but the only thing she had to worry about was finding a kitchen.

Roach was able to connect her with Margaret Norfleet-Neff, the owner of the Cobblestone Farmers Market, who just happened to have a recently-vacant commercial kitchen. So Naomi and Natalie packed up some fresh-baked products and headed to meet with Norfleet-Neff, who, in turn, loved the samples and offered to rent out her kitchen to them.

Just like that, Naomi’s dream evolved into Lavender and Honey Kitchen, a local pop-up bakery owned and operated by the mother-daughter duo.

“Within like two weeks time, we applied for our LLC (Limited Liability Company), we moved into Margaret’s kitchen and we got our inspection by the state,” Naomi said. “I kid you not, it was like everything fell into place.”

Naomi and Natalie’s first debut at the Cobblestone Farmers Market was June 17, 2017. After they completely sold out of their products, they knew they were off to a good start. They have sold out of all of their products ever since. “Seventy-five percent of our stuff sells in the first hour,” Naomi said.

They kept their momentum going by bringing their products to the New Philly Farmers Market, held at a local Moravian church through the month of July, and the Wednesday Cobblestone Market held by the Forsyth County Department of Health.

Their customers, newfound and returning, rave about their treats regardless of their pop-up location. Susie Van der Glas bought 10 of the bee pollen protein balls from their Oct. 13 Cobblestone stand and admitted to sharing them with her son and his girlfriend. “They’re fantastic,” Van der Glas said. “It’s organic, it’s natural. All their stuff is really decorated and beautiful, and that pulls me to them.”

Their exposure allowed them to develop a diverse customer base and rely on their key values: local ingredients and creative products. As they talked to customers about ingredients, recipes and community, they realized there were plenty of qualities that set them apart.

“Probably the biggest thing is that we use North Carolina milled flour,” Naomi said. “We use it in all of our products, and I’m not aware of any other bakers in the area that do. I feel like we pay attention to details like that.”

They have baked everything from curried vegetable hand pies to a chocolate rhubarb cake with beet juice buttercream icing. All featuring local ingredients and constantly pushing the envelope on creativity and classic recipes. “I just want to awaken the palettes of Winston-Salem a little bit and be surprising with the flavors that we use,” Natalie said.

Both Naomi and Natalie confess that the success of the business has relied on balance, especially of their personalities. “I would like to think we complement each other. Natalie is good at quality control, and I keep us on the schedule,” Naomi said. “I say that I would be the driving force in the baking. But I think she is the driving force in the vision-casting.”

Through it all, they both agree that they have developed a relationship that surpasses mother and daughter. They think of each other as partners, confidants and friends, while respecting each other’s strengths and weaknesses.

“Our differences, though they are sometimes trying, actually makes for a very well-rounded business because we’re coming from these different points of view,” Natalie explained. “I don’t know if I could work this hard for someone else. I think I can only do what we’re doing because it’s our name and our baby, and it’s worth it.”

Their balance of qualities has taken them beyond their farmer’s market clientele, now expanding to sell their products at Let It Go Produce in Winston-Salem, as well as Sweet Aromaz, a local coffee, tea and flower shop.

Naomi and Natalie have been thinking about what comes next ever since they surpassed their original goals for a new vehicle, moving out of their old home into downtown Winston-Salem, and building a bigger following in just six months. “Now I’m raising my hopes a little higher and dreaming a little bigger,” Naomi said. “We hope to have a storefront by spring 2018, but that could happen sooner too.” Their ideal location for their own storefront would be in the same area that has helped them become so successful in their short journey. “The thing about Winston that’s so nice is that really small businesses are so supportive of each other,” Natalie said. “I’ve lived in places where everyone is trying to one-up the other, and it’s really nasty competition. Here everybody lifts each other up and wants each other to succeed.”

With several locations supporting and selling their products, tested recipes and high levels of determination, the Gingerich ladies are hardly stopping now.

To make up for the Cobblestone Farmer’s market ending on Nov. 18, they are taking orders for holiday gatherings and personal cravings. The menu can be found on their website (www.lavenderandhoneykitchen.com) with anything from bourbon pecan pie to chocolate ginger molasses cookies.

Their intentions hardly fall short of simply offering baked goods and having their own storefront. They ultimately hope to bring their passion for humanitarian service to their community as well. “We’re both really passionate about humanitarian things and also helping out,” Natalie said. “It’s on our radar of how we can connect or how we can use this to kind of fuel that side of us.”

But for now, Naomi is trusting God’s divine timing. “It just felt right, that it was just the season for me to develop it,” Naomi said. “I think that the picture is bigger than what we can see.”