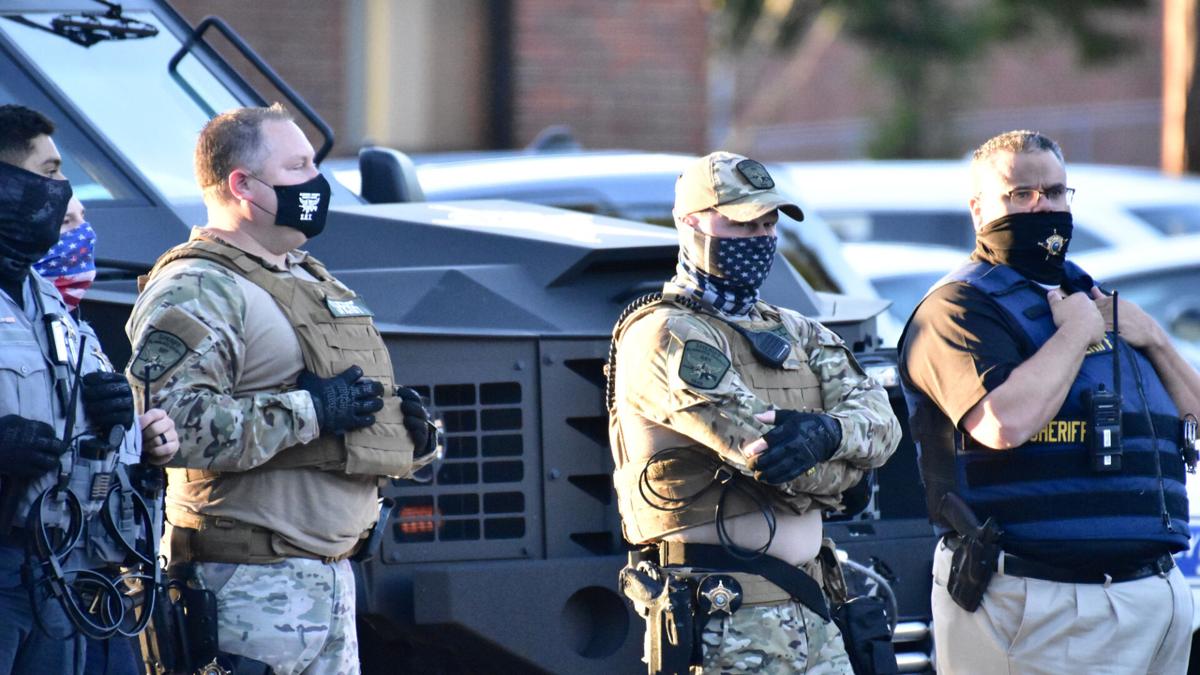 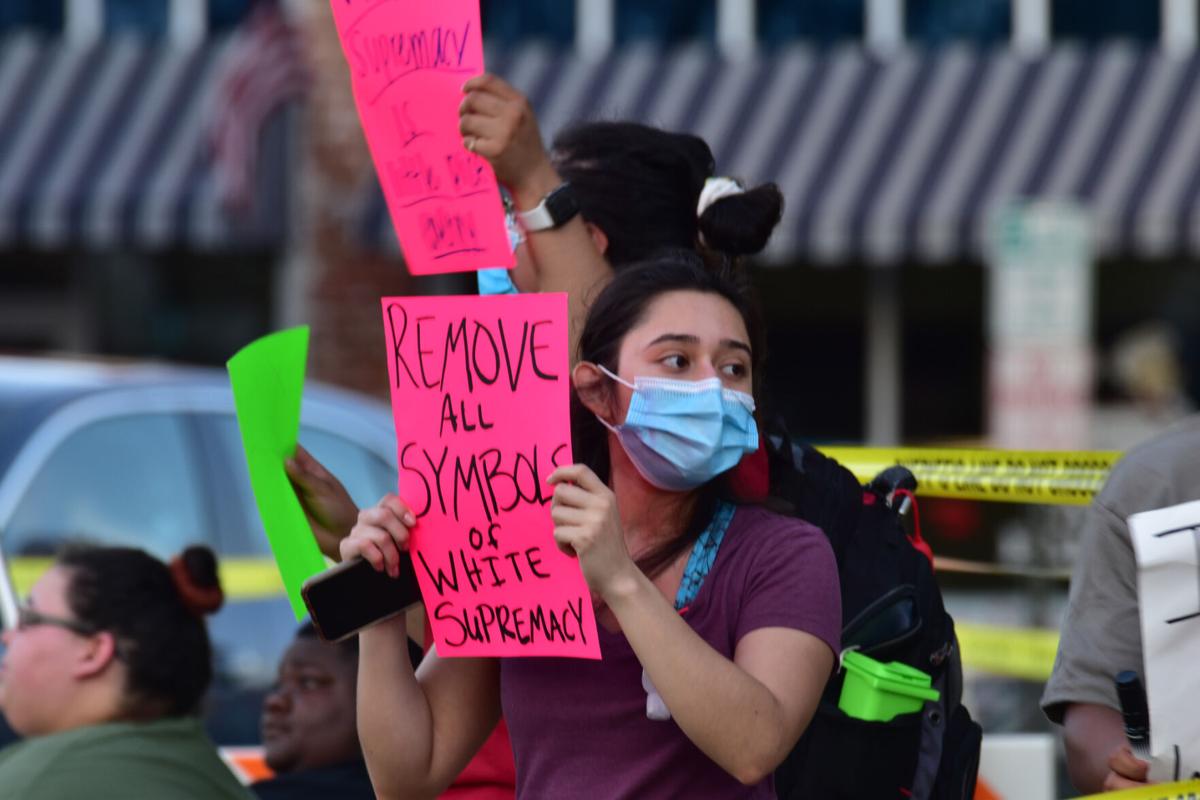 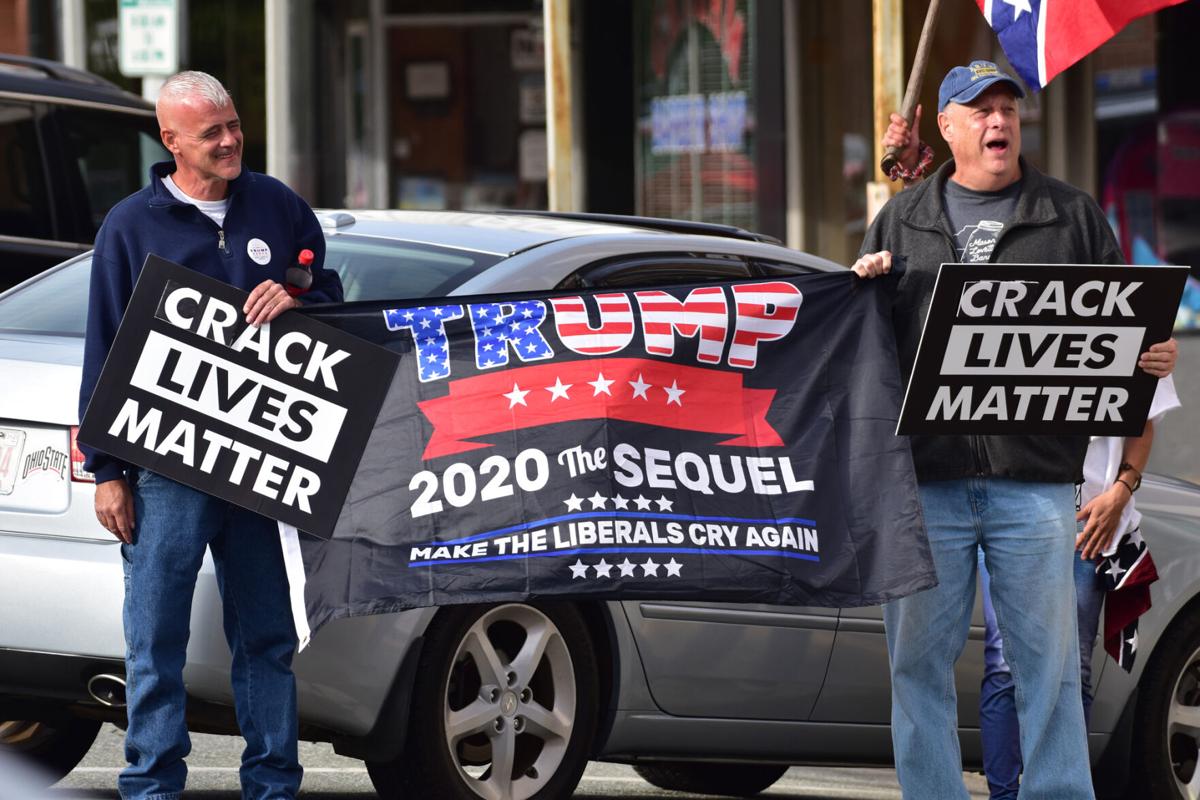 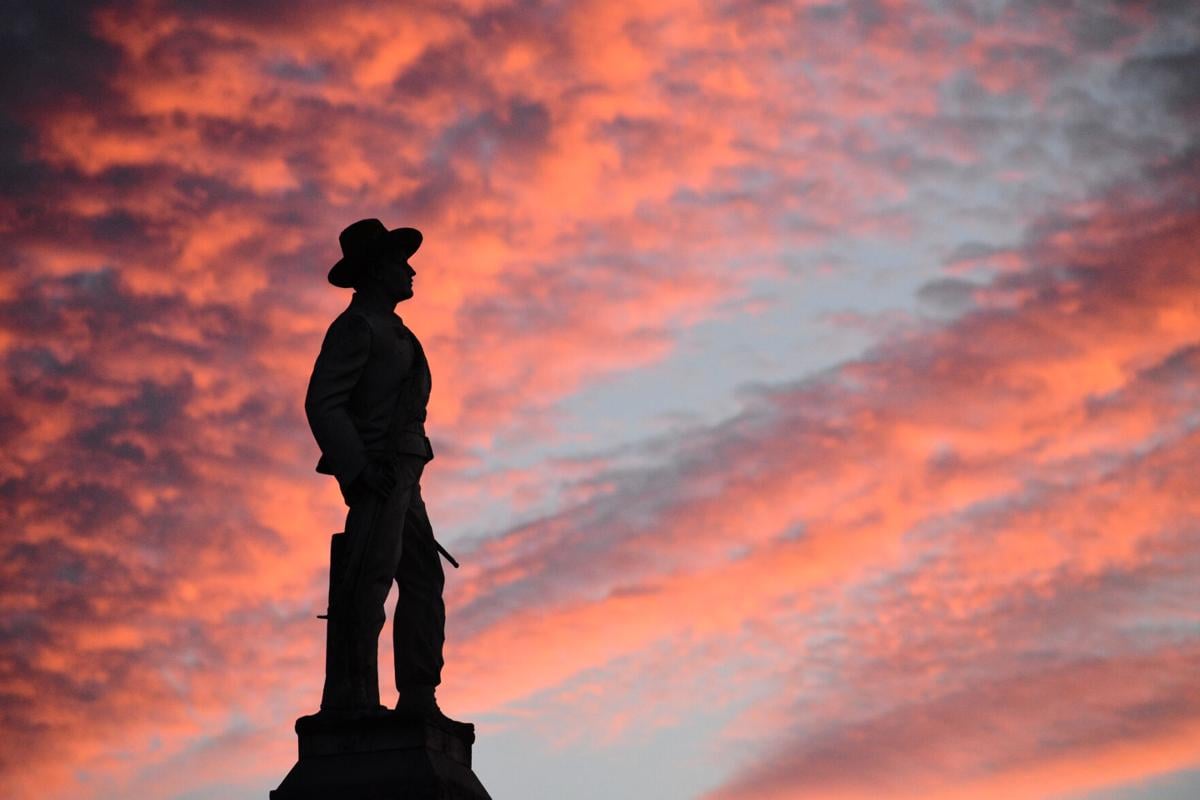 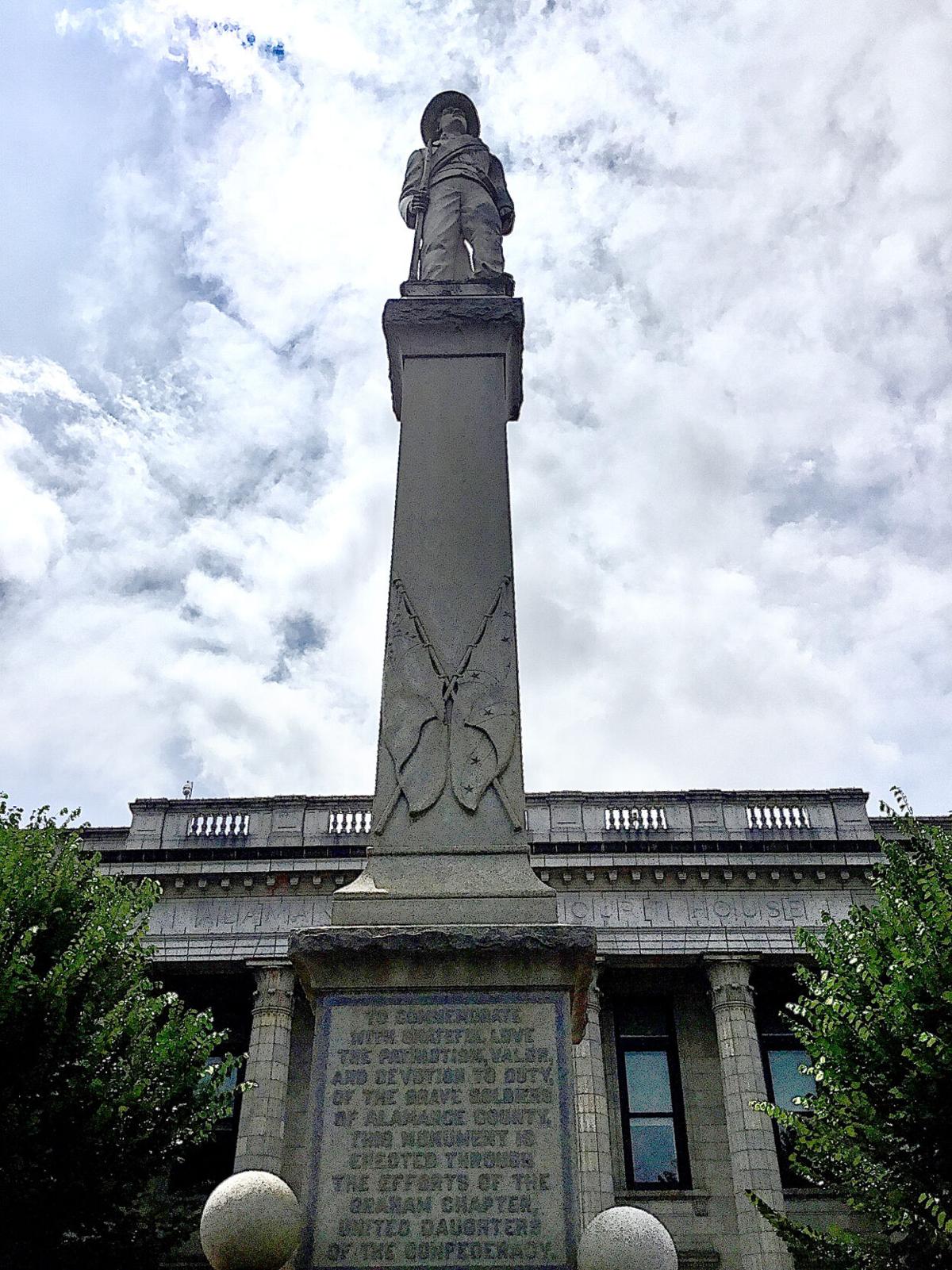 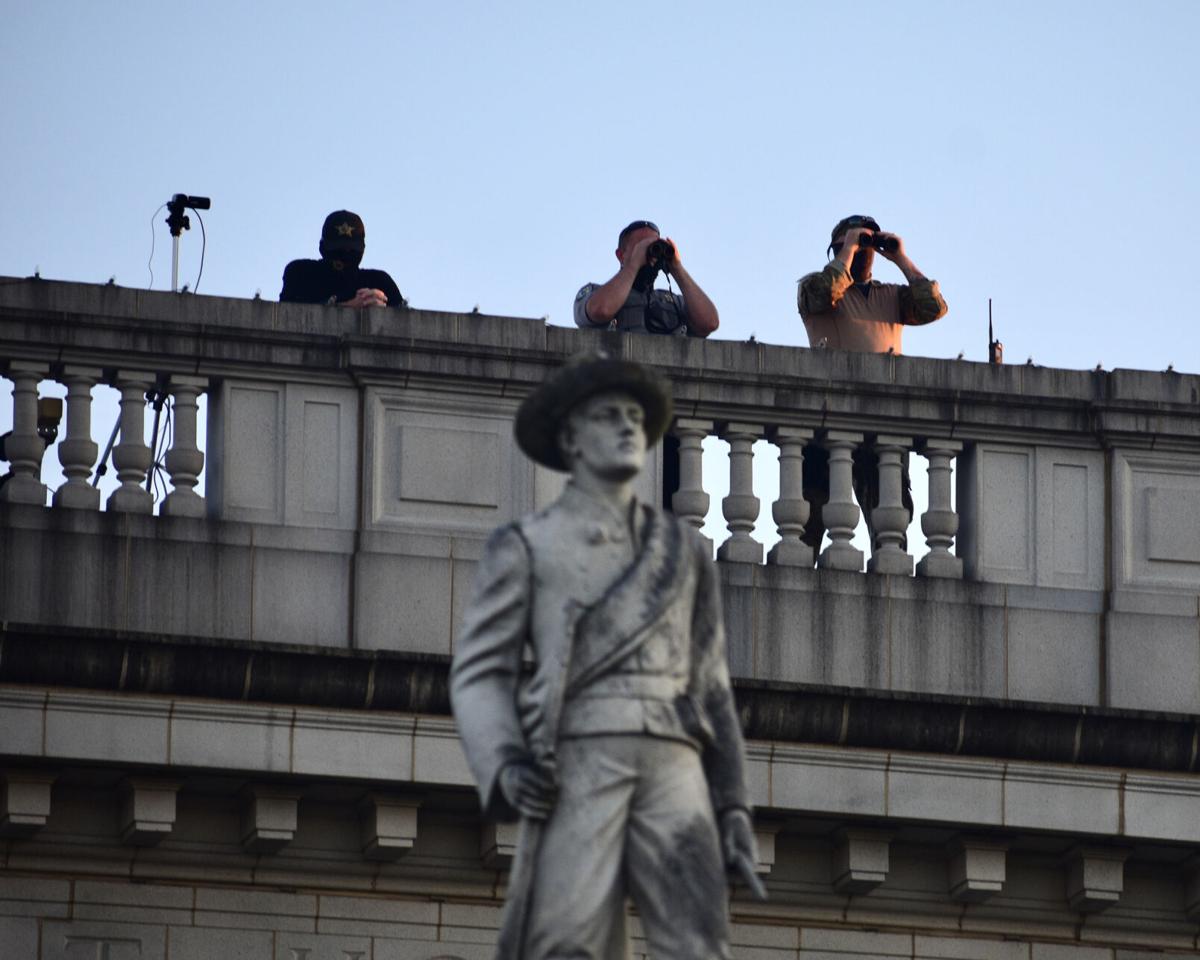 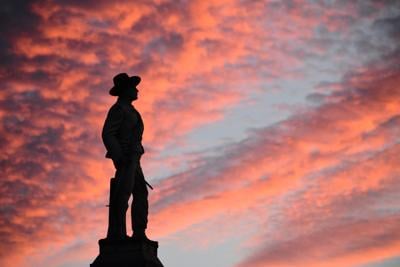 The North Carolina chapter of the National Association for the Advancement of Colored People and a multiracial coalition of Alamance County residents and business owners have sued the county’s all-white Board of Commissioners. The lawsuit is intended to move what may be NC’s most controversial remaining Confederate monument out of Court Square in downtown Graham.

The Complaint, filed on March 30 in Alamance County State Superior Court, alleges that the 107-year-old monument is not merely a memorial to “THE BRAVE SOLDIERS OF ALAMANCE COUNTY” as its inscription claims, but was erected and dedicated as a deliberate symbol of white supremacy, slavery, and secession. Because of this, the Complaint argues, the monument violates the North Carolina State Constitution.

The Complaint also alleges that the monument presents a public danger as a literal rallying point for white supremacists making threats against people of color, is a waste of taxpayer dollars and causes potential customers to shun downtown businesses.

Named, as Defendants, are Alamance County and its commissioners Steve Carter, William T. Lashley, Pamela T. Thompson, John Paisley, and Craig Turner Jr. These five officials, the Complaint alleges, have failed in their duty to the state and its constitution by refusing all entreaties to move the monument to a museum or other place where it may be viewed in its historical context and can be avoided by those who do not wish to see it, much less be heckled by the neo-Confederates who gather to pay it homage.

- The North Carolina State Conference of the NAACP and NAACP Alamance County Branch # 5368,

- The organizations: Down Home North Carolina and Engage Alamance,

The Complaint cites a June 20, 2020 email from Alamance County Manager Bryan Hagood warning the Board of Commissioners that someone could be “seriously injured or killed” if the monument is not moved from its present location.

After that email went public last June, more than 50 community leaders sent the Alamance County Board of Commissioners a letter asking that the statue be relocated. Signers included Burlington Mayor Ian Baltutis, who called the monument “undeniably a part of our history,” but one that “represents an ideology incompatible with equality.”

On June 28, the Board responded that they did not have the legal authority to move the monument, as it “is an object of remembrance as defined by North Carolina General Statute 100-2.1,” referring to the controversial Monuments Law approved by then-governor Pat McCrory in 2015, which states that “objects of remembrance” cannot be removed from their original location.

Paragraph 54 of the Complaint alleges that the Board’s response was based on misreading that statute. “First, by its own terms, [the law] does not apply to objects of remembrance which a building inspector or similar official has determined pose a threat to public safety,” which the County Manager described the monument as being.

According to Paragraphs 56 and 57 of the Complaint, the Monuments Law “only constrains the movement of objects of remembrance, defined solely as a monument or similar item that commemorates an event, a person, or military service that is part of North Carolina’s history.” It then alleges that the monument does not commemorate a specific person or event. Paragraph 58 of the Complaint argues that “armed rebellion against the United States cannot be considered ‘military service,’ particularly given the North Carolina Constitution’s stated opposition to secession.” Thus, the monument “does not qualify as an ‘object of remembrance’ and is not protected by the Monuments Law.”

The Complaint then goes on to describe North Carolina’s and Alamance County’s post-Civil War history, according to the title of the next section of the Complaint, the “Monument’s Erection and Dedication Honored White Supremacy and Defied the Constitution.”

Historians agree that many Confederate monuments installed between the first and fifth decades of the 20th Century were erected as a statement against Black suffrage and civil rights. As YES! Weekly reported in the August 11, 2020 cover story “Wyatt Outlaw and the white men who put a monument where they lynched him,” this is particularly true in Alamance County.

On February 26, 1870, Wyatt Outlaw, a Black Alamance County Union veteran, was lynched by the Ku Klux Klan on or near the site where the confederate monument would later be erected. Outlaw, a Graham town constable, a labor and Black rights organizer, was murdered for chasing Klan “night riders” out of town. Last year, neo-Confederate counter-protesters were seen by a YES! Weekly reporter taunting anti-racist activists near the site of Outlaw’s lynching by grasping their own collars, standing on tip-toe, and sticking out their tongues in an apparent imitation of a man being lynched.

Several contemporaneous accounts of Outlaw’s murder state that he was killed at the order of Jacob Long, the Guilford County Klan leader who expanded that terrorist organization into Alamance County and was specifically opposed to Black men bearing arms, as Outlaw did. Long was arrested as an accessory in Outlaw’s murder, but when Governor William Woods Holden was impeached for ordering Long and other Klansmen’s arrests, all charges against Long were dropped.

When Graham’s Confederate monument was dedicated in 1914, Jacob Long was Master of Ceremonies. Long’s speech stated that the purpose of the monument was “to recall the achievements of the great and good of our own race and blood.” The monument was a gift from the United Daughters of the Confederacy, which openly defended the recently-revived Klan as an “absolute necessity in the South” and “the very flower of Southern manhood.”

The monument on the site of Wyatt Outlaw’s murder is just one of many erected across North Carolina in the first decades of the 20th century, mostly due to the efforts of “Major” Henry London and his wife Bettie Jackson London, who was Chair of the Monument Committee of the NC Daughters of the Confederacy. Henry London also spoke at the monument’s dedication.

Although he insisted on being called “Major,” London avoided most of the war by being a student at Chapel Hill, serving six months as a private before Lee’s surrender. After the war, he championed white supremacy in his newspaper, The Chatham Record, and campaigned for the Disenfranchisement Amendment to the North Carolina Constitution, which, when it was enacted in 1900, kept almost all Black North Carolinians from being able to vote until the 1960s.

The section states that the Alamance County Sheriff’s Department has spent an estimated $747,672 guarding the monument during protests in 2020. “Further to this very point, on March 26, 2021, Alamance County officials announced that the government is in the process of erecting an additional barrier around the Confederate monument outside of the old Alamance Courthouse, expending even greater resources on protecting a monument without public purpose.”

Paragraph 44 of the Complaint begins, “In addition to financial harm, the enduring presence of the Alamance County’s Confederate monument on County property poses physical risks to Plaintiffs and their fellow County residents.” It cites as an example Elon University professor Megan Squires, who, along with her husband, Tony Crider (also a member of Elon faculty), was assaulted last June by neo-Confederates near the monument.

The Complaint also asserts that the monument “serves as a magnet for members of organizations identified by the Southern Poverty Law Center as neo-Confederate hate groups, such as ACTBAC (Alamance County Taking Back Alamance County) and the League of the South. As has been publicly reported, such groups often espouse both white supremacy and violence, including at times, through the promotion of U.S. civil war.” It also states that Plaintiff Dreama Caldwell “is aware of the continuing presence of and threats from ACTBAC and the Proud Boys regarding the Confederate monument, noting that members from both groups have shown up to physically defend the monument and threaten violence against those opposed to the monument.”

The Complaint alleges that multiple persons have received death threats for protesting the monument, and that Graham and Alamance law enforcement regularly and violently arrest anti-monument protesters while maintaining a cordial relationship with neo-Confederate counter-protesters. YES! Weekly has reported on multiple instances of this, and the disparity was noted by the Alamance Times, even before a reporter for that weekly was roughed up, pepper-sprayed, and arrested during what local leaders call an attack by the Alamance deputies and Graham police officers on an October 31, 2020 voting rights march. That response to that march by law enforcement officials received condemnation from North Carolina governor Roy Cooper and Attorney General Josh Stein and the attention of the world press.

The Complaint does not note the alleged friendship that Sheriff Terry Johnson publicly displays towards members of ACTBAC. YES! Weekly and other publications have reported these incidents and documented them via photographs and video.

While the Complaint states that numerous Alamance County residents have spoken before the Alamance County Board of Commissioners over the past year to request the removal of the monument, it does not note the controversy caused by responses from the all-white, Republican board.

Last year, the late Commissioner Bill Lashley, a former police officer, made national headlines when he expressed apparent nostalgia for the days when officers could “beat the hell out of” protesters with impunity. Lashley also responded to an email from constituent Meg Williams with, “If you and your friend did not hate America so much, you would realize America May not be purific [sic] but it’s a good country.” When Williams requested clarification of the bizarre response, he replied, “Can you not read,Or you trying to overthrow America [sic].”

Lashley, who died in December, should not be confused with his son William T. Lashley, who now serves on the board. Last year, the junior Lashley mocked anti-monument protesters from his seat in the audience at a November Board meeting.

The Complaint ends with the following statement:

“Plaintiffs seek a declaratory judgment or decree because such action by this Court will terminate an actual controversy or remove an uncertainty among the parties. Specifically, Plaintiffs seek and have established grounds for a judgment or decree declaring that the monument violates one or more provisions of the North Carolina Constitution as set forth in Counts One through Five above, that Defendants own, possess, and/or maintain the monument on county property and therefore have authority to relocate or remove the monument from its current location on county property, and that Defendants are required by law to effectuate immediate removal of the monument to remedy the aforementioned, ongoing constitutional violations.”

YES! Weekly has reached out to Alamance County Commissioners John P. Paisley, Steve Carter, Bill T. Lashley, Pamela T. Thompson, and Craig Turner, Jr. for comment about being named as Defendants in the lawsuit. On Monday, Board Chair Carter responded: “Thanks for our interest. We have been advised to direct inquiries to our Alamance County Attorney, Mr. Clyde Albright.”

YES! Weekly requested a comment from Attorney Albright, who had not responded at press time.