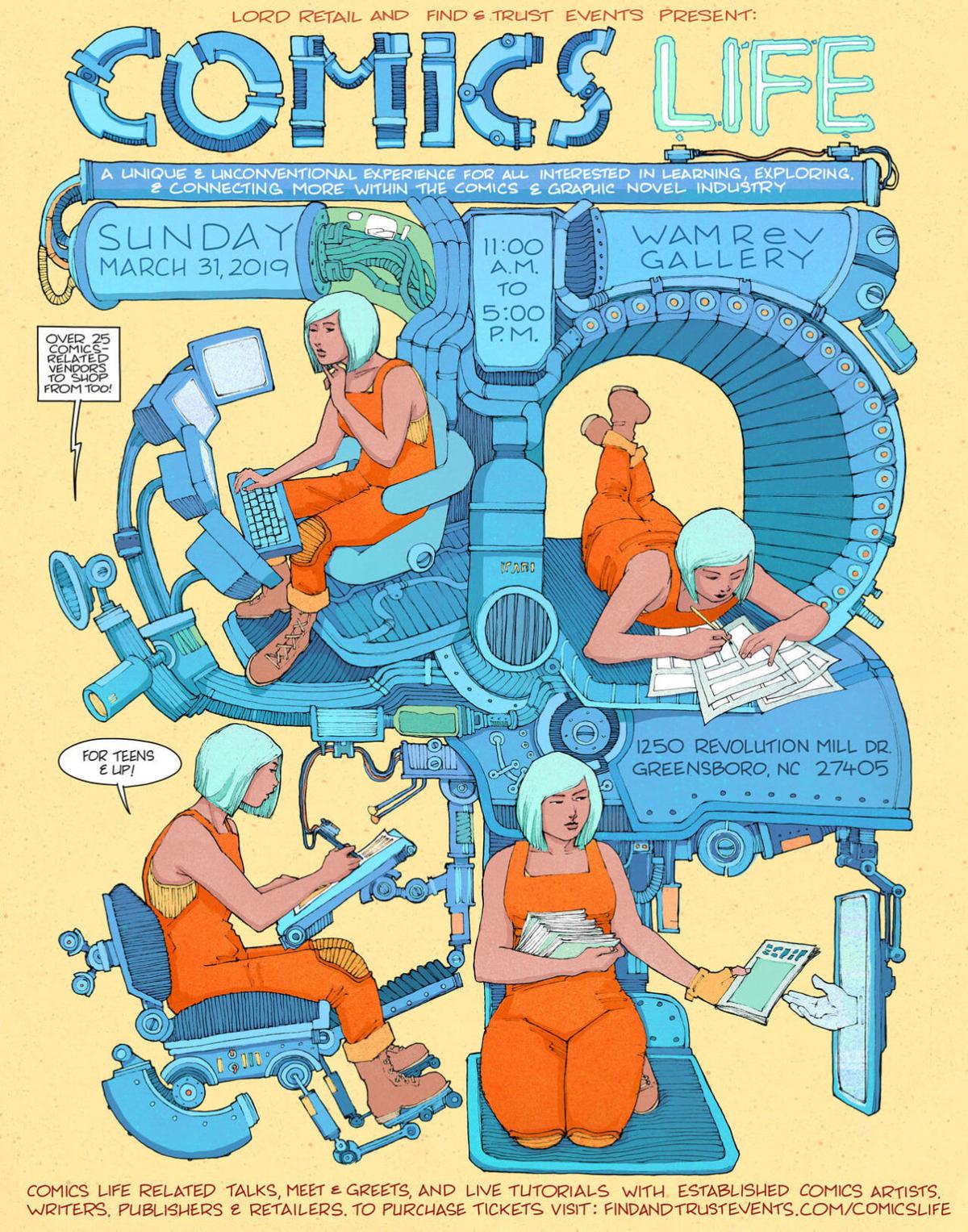 Greensboro artist and event organizer Miller is a longtime fan who thinks comic book conventions are great, but she and Exum wanted to do something a bit different with Comics Life, which she described as “more like a TEDx-style event centered around comics” in a recent phone conversation. “It’s about skill-sharing, networking, having real conversations. It’s an opportunity to connect on a deeper level and have a real talk about the industry.”

She said that doing the Greensboro Zine Fest, as well as seeing a variety of comics artists use the zine format to share information, had been a big inspiration and that the format was inspired by the Hand-to-Hand Market she’s been doing for the past eight years.

“So, the booths and the costumes and the boxes of comics for sale and the artist meet-and-greets, all the stuff you usually see at a comics convention, will only be one part of Comics Life. The meat of it will be the workshops, the panel discussions, and the presentations.”

She mentioned the workshop Greensboro writer/artist Barrett Stanley, creator of the award-winning Heartbreak Quadrant will be leading on crowdfunding.

“That’s an important topic that doesn’t get much exposure at traditional conventions, even though some of the best graphic novels of recent years, including Barrett’s own, have been crowdfunded.” She said that Stanley was the first person she contacted and that she gave him full control of the visual aspects of the event.

“Tristin and Jermaine approached me about creating some artwork for the show, and I jumped at the opportunity,” Stanley told me, adding that he was excited by the idea of a comics event focusing on creativity and idea-sharing. “There are so many people making amazing comics in the indie scene here in the southeast, and events like this are a great opportunity to talk to other creators and get inspired.”

Along with Stanley, other artists, writers and guest speakers will be leading workshops, giving talks and participating in panel discussions. These include Michael Moreci, whose Roche Limit from Image Comics was named “one of the 50 best science fiction comics of all time by Paste magazine; cartoonist and illustrator Emmett Helen, whose work deals with, in the words of Helen’s website, “intersectional queer issues, mental health, and supernatural hijinks;” Comics Journal critic Rob Clough; and Jeremy Whitley, writer of Marvel’s The Unstoppable Wasp and co-creator of the award-winning all-ages series Princeless.

Both Miller and Exum said they were excited to be holding the event at Revolution Mill. “I love the aesthetic,” Exum said, “the intentional connection to what the place meant, for better or worse, to Greensboro. When new people come to town, I take them to Cugino Forno and give them a tour of the event space and workspaces. The WAMRev gallery, its layout, and colors, and shapes, has impacted me in a way few rooms ever have, and I’m excited that we’re going to be working with them.”

Comics Life will be held Sunday, March 31, from 11 a.m. to 5 p.m., in the WAMRev Gallery of Revolution Mill at 1250 Revolution Mill Dr. in Greensboro. Tickets are $12 and available via Eventbrite.com. For updates and more info, check the Comics Life Facebook event page.