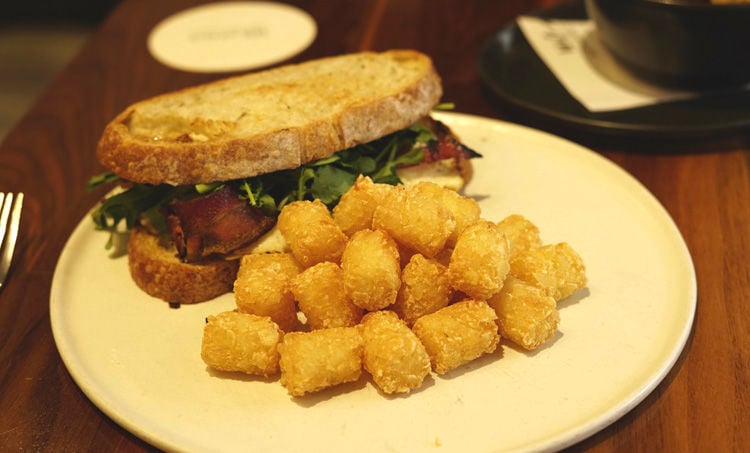 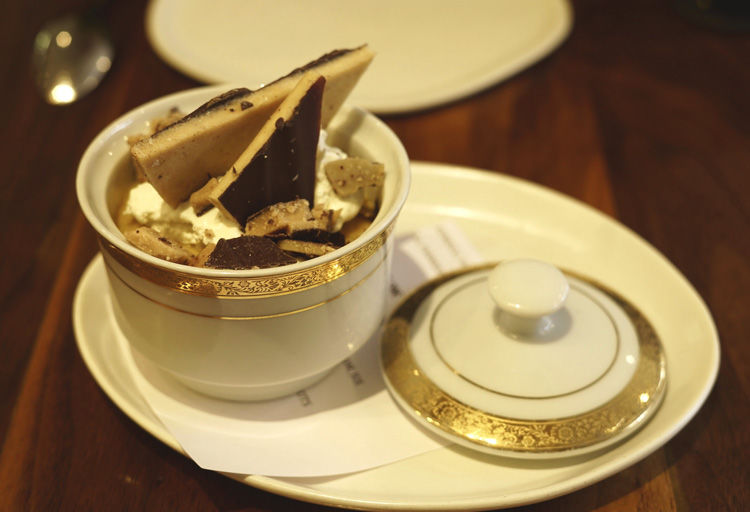 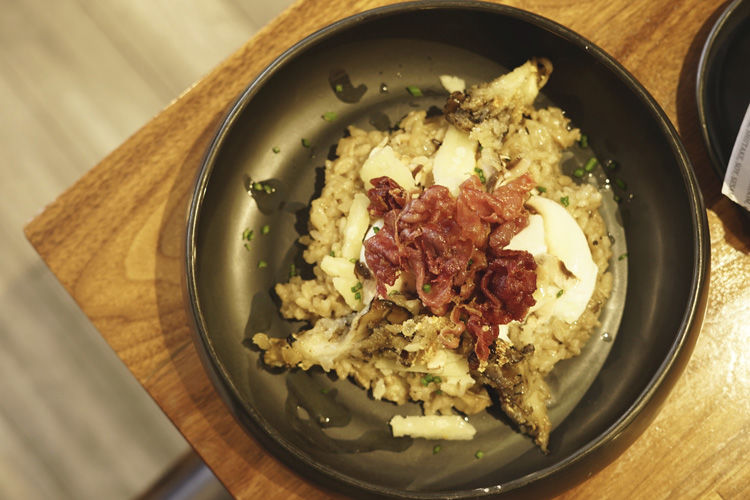 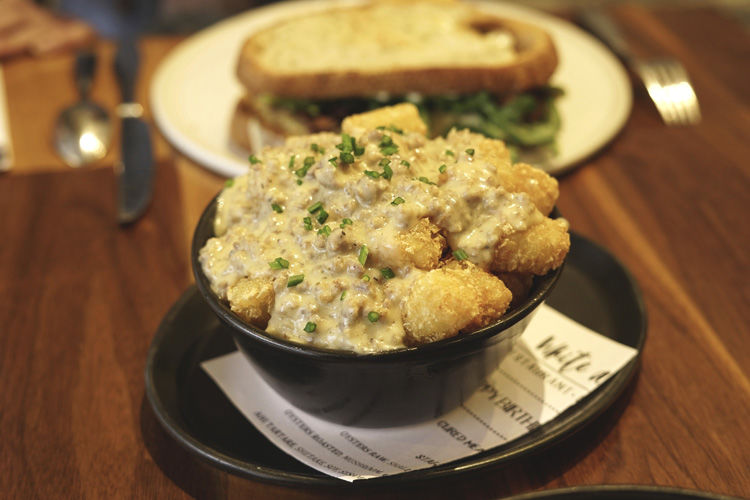 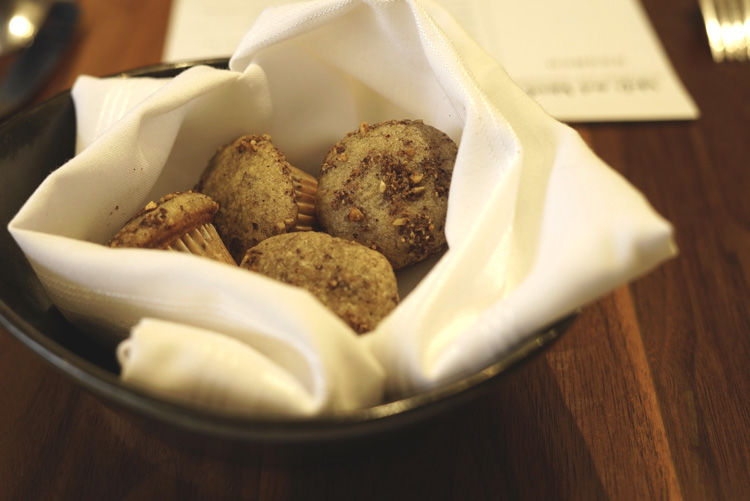 “Breakfast at Tiffany’s and bottles of bubbles…” If Ariana Grande’s newest hit “7 rings” has you wanting to gather your closest girl squad, forget Tiffany’s; Brunch at White and Wood in downtown Greensboro is a must.

Located at 215 S. Elm St, White and Wood hosts brunch on the first Sunday of every month, with their next scheduled for March 2. It’s an Instagram-able brunch worth waiting for.

The cocktail menu does not have Bellocq teas; rather, it features a few of your favorite things: mimosas, bellinis and Bloody Marys, even a bubbles kit with a bottle of Roederer Brut with peach purée, or a glass of rosé.

And the dishes go a few steps further than finger sandwiches, avocado toast and sunny-side eggs.

Although he’s not my gal pal, my boyfriend Peyton offered to join me for a pre-Valentine’s day brunch, and we were nothing short of impressed.

The interior of the restaurant is arranged into a long row of classy wooden tables, with a lengthy bar that seats 14 comfortably overlooking the kitchen. If you’re lucky enough to grab one of the two tables by the window, you can watch the downtown traffic lull by, or get in some good dog sightings.

We were welcomed with warm, soft and sweet banana nut mini muffins before ordering. Although the muffin flavors might change from month-to-month depending on availability, who wouldn’t want to celebrate brunch by eating small muffins meant to be devoured? It was noticeable that they were made with real banana (no imitation flavor or artificial sweeteners), which we appreciated, and they were just big enough to take more than one bite. Despite that, they were gone quicker than you can say “make more mini muffins.”

White and Wood clearly knows how to translate a dinner menu into one that is appropriate for mornings, without dropping any of the fine ingredients. Goat butter, aioli, broccolini, bacon lardons, filet mignon: you get the picture.

We thought maybe, just maybe, we would still need a little more to munch on since brunch (no matter the price) can be smaller portions with the same amount of hunger, so we ordered the breakfast tots with Neese’s hot country sausage gravy and chopped scallions to share.

We enjoyed the ambiance of a calm Sunday morning during our wait and were practically drooling by the time our plates arrived. They looked great, but they smelled even better.

The initial reaction to Peyton’s mushroom risotto was, “who would have thought of crispy mushrooms in the morning?” (Aside from being in a fancy omelet, that is.) The dish had four types of lightly-fried mushrooms that were the perfect texture. Each had the soft, sweet and savory balance expected in fresh mushrooms, and were paired with a golden crunch. The risotto was al dente and peppery, not buttery, but still rich, and the large slices of the English white cheddar weren’t creamy, but more like a firm Parmesan that made the risotto’s texture more well-rounded. With the extra richness of the poached egg and salty prosciutto, which we refer to as “boujee bacon,” this dish was over-the-top good.

One would think a breakfast sandwich would be the furthest and least-fancy dish compared to the risotto or beef carpaccio, but this wasn’t your average breakfast sandwich. Two thick-cut pieces of herb sourdough were just the beginning of the subtle yet powerful flavor notes throughout. Paired with the smoky thick-cut bacon, a well-fried sunny-side egg oozed when I sliced the sandwich in half (the only downfall— it could get a bit messy if you’re not careful), and melted into the Gruyère cheese, that protected the bread from getting soggy. Each bite was different, some with more crunch closer to the edges, and others with more of the freshness of the tomato and arugula toward the center. I didn’t taste the aioli on its own, but a slight creaminess here and there reminded me that it was there, somewhere. There were just other flavors that were more important. With a side of tater tots, I realized something I thought I would never admit: we had too many tater tots to finish.

The breakfast tots were made for someone looking to indulge in a Southern favorite without compromising a swanky brunch feel. The sausage gravy was not too salty, watery or greasy (the top three faults of many). Rather than being heavily smothered, there was enough gravy to make your way through the bowl with enough for each tot, just be warned, eat them with a fork rather than your fingers. You’ll thank yourself later.

This wasn’t a croissant and cup of coffee brunch; there was more than enough food for both of us. We were stuffed, and yet, we had one last box to check off on a list of favorite things: chocolate. The pot de cremé was described as “chocolate, butterscotch, ‘Heath bar’ crumble and vanilla cream,” on the menu, and I am here to tell you, that doesn’t even begin to cover it.

Served in a ceramic dish that was deceptive in depth, there was a thick, pudding-like bittersweet chocolate mousse topped with creamy, rich butterscotch, and covered with crumbles and pieces of the house-made toffee “Heath Bar,” and a scoop of fresh vanilla bean whipped cream. It’s creamy, it’s crunchy, it overtakes your senses, and once you start, you’re not sure how you’ll stop eating it. The toffee became my Kryptonite (I realized that afterward too when I went internet-insane trying to find a copycat recipe). The toffee wasn’t hard or sticky, and I became fascinated with the pairing of the rich butterscotch custard with the bittersweet chocolate. The mousse wasn’t fluffy or aerated like most but was smooth and silky, and easily one of the best chocolate-focused desserts I’ve ever had.

At White and Wood, there’s no need to grab your diamonds and drain your nearest ATM. Your brunch won’t break the bank, and everyone is welcome, whether they’re discreet or dazzling. Just be careful with your newest motto when you peruse the menu.

Jennifer Zeleski is a senior Communication major at High Point University, who is always eager to cook, eat and listen. Her many food adventures can be followed on Instagram @jayz_eats.

White and Wood is located at 215 S. Elm St. in Greensboro.