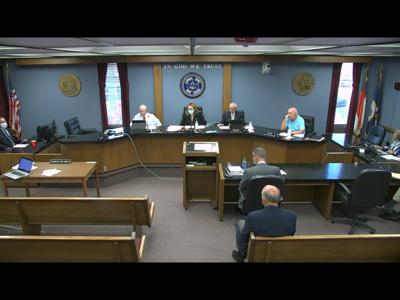 At the July 20 Alamance County Commissioners meeting, 10 members of the public accused the board of ignoring threats from armed racists “protecting” the Confederate monument that stands in front of the county's courthouse.

The five Alamance County commissioners, all of whom are white and Republican (and four of whom are men over 60) appeared unsympathetic to claims that either the 1914 monument or its armed neo-Confederate defenders are racist.

“The only racist she knows is the ones staring back at her in the mirror,” said Commissioner Bill Lashley of the evening’s first speaker, Dr. Beulah Mitchell.

A former police officer, Lashley is no stranger to controversy. He received national coverage for his remark at the May 18 meeting, in which he said, of people detained by the police: “You can’t do now what we used to when I was on the force. We used to beat the hell out of ‘em!”

As previously reported, Lashley recently responded to an email from his constituent Meg Williams with If you and your friend did not hate America so much you would realize America May not be purific [sic] but it’s a good country. When Williams requested clarification of the bizarre, he replied Can you not read,Or you trying to overthrow America [sic].

In her comments, Dr. Mitchell called for the resignations of Lashley and Chair Amy Scott Galey, who had laughed at Lashley’s comment about beating detainees. Mitchell also condemned Commissioner Tim Sutton for making the following statement at a previous meeting:

“We’ve got to start maintaining the mores of this nation and realize that we have them and do what we have to do to enforce them, and being sweet and handing out cupcakes on the corner isn’t going to get it done.”

After Mitchell’s three minutes were up, the County Clerk asked if any commissioners wished to respond to her comments.

“I’m not going to have to resign,” Sutton said. “I’m going to be gone in five months, anyway, so she’ll get her wish.”

Sutton, who has announced he will not run for re-election, is also no stranger to controversy. In 2017, the Associated Press reported his remarks during a meeting in which he referred to the slaves on his great-grandfather’s farm as “workers” and claimed to be a “chartered member” of the Sons of the Confederacy.

Forty minutes into the July 20 meeting, the sound of protesters gathered outside in Court Square became audible in the chamber.

“This is ridiculous out here," Sutton complained. “I’m not kidding. Is that legal out there, what’s going on?”

“City of Graham gave permission to do it,” Lashley said.

The next public speaker was Quenclyn Ellison, who stated that she has lived in Alamance County for 35 years, but that “over the last couple of years, I’ve watched racist actions grow.” Ellison accused the board of not only turning a blind eye to militant racism but of making racist statements themselves.

“Watching it being displayed in such a public manner from our commissioners and people that we elect to represent us is painful.”

The third speaker was Dr. Rochelle Ford, who described herself as a new resident of the county, having been recruited by Elon University.

Ford said that she intends to continue working, living, and paying her taxes in Alamance County, but that “I implore you, therefore, as our county commissioners, to definitely vote to make a change by relocating the statue and working toward making our community more inclusive of all.”

The fourth speaker, Burlington resident Amy Cooper, described events during a recent prayer walk, at which neo-Confederate counter-protesters were “allowed to engage in unlawful behavior, including damaging county property and rude gestures to the public” without any interference from law enforcement, while a marcher was arrested and charged with a misdemeanor for using profane language in public.

“I’m ashamed that there is even a debate about removing a statue that has been referred to by multiple media outlets as a lightning rod for violence. I am ashamed that when I go to downtown Graham and my kids ask to go with me, I have to tell them that they can’t, it’s too dangerous.”

She also pointed out that a great deal of money could be saved by moving the Confederate memorial to a place where the Sheriff’s Department didn’t have to protect it 24-hours a day, seven days a week. “It could be a win-win situation for everyone involved. The sooner we begin plans to relocate the statue, the sooner the community can begin healing.”

At the beginning of the meeting, only Chairwoman Galey wore a mask, although Boswell and Lashley donned masks shortly after the livestream began (Vice-Chairman Steve Carter attended the meeting by phone). Sutton remained unmasked the entire two-hour and 10-minute time.

The next public speaker was Williams, the woman Lashley had accused of “trying to overthrow America.” Williams did not direct her first remarks to him, but to Sutton, asking ‘where’s your mask, sir?”

In her three minutes at the podium, Williams described the night of June 20, when, she said, “my husband and I received word that two of our Alamance County neighbors were suffering a barrage of racial insults and slurs simply for being Black in downtown Graham.”

Because her friends did not feel safe, William alleged, she and her husband came downtown to stand with them.

“No chanting, no signs, no involvement with the instigators whatsoever, simply observing for their protection, and what we saw was abhorrent.”

She described the streets and sidewalks as being crowded with members of Alamance County Taking Back Alamance County (ACTBAC) and other neo-Confederate organizations, many of whom were openly carrying weapons, and who not only hurled insulted at the couple and their friends but repeatedly referred to them as “target practice.”

Although both open-carry and concealed-carry are illegal at demonstrations in North Carolina, “none of them were arrested for this, nor was any attempt even made to disperse this crowd for hours, unlike the multiple attempts at disturbing and preventing peaceful anti-police brutality protests.”

Williams said that she and her husband witnessed three assaults by neo-Confederates that night.

Williams concluded by stating that the threat of armed neo-Confederates “loses our businesses what little revenue they could be bringing in during the common crisis of a global pandemic” and by describing the memorial as a symbol of oppression erected on the site where Wyatt Outlaw, Graham’s first Black city council member and constable, was lynched.

As she was leaving, Sutton asked “what was that lady’s name? Meg Williams?”

“Yeah, Meg Williams,” Lashley said, “We got her email.”

When Elon resident and Graham business owner Quin Ray took the podium, he called the monument “an unequivocal symbol of oppression” and said, “Graham should be a beacon, not a blight.”

Hearing this, Sutton shook his head and frowned.

“You rolled your eyes at me, sir,” Ray said.

(Ray did not get a warning to not engage with the commissioners as Williams did.)

As Ray spoke, Sutton picked up his tablet and began clicking and swiping on it.

When Ray turned to leave, Commissioner Eddie Boswell asked: “Excuse me, where did you say you were from?”

“He owns a bar,” said Sutton, putting his tablet back down. Ray later told YES! Weekly that he doesn’t own a bar, but is a partner in two Graham restaurants.

Other speakers were Dreama Caldwell, Carey Griffin and Michael Graves.

Caldwell stressed the need for open communication, and for the commissioners to become active listeners, rather than hanging up on callers, ignoring emails or attacking those sending the messages.

“I implore you to listen, not to defend a position.”

She described the commissioners’ response to the public was very different from that of Burlington’s Police Chief, whom she first met in a community meeting. “He came to the people; the people did not come to him.” She also stated, “There is a lot of tension for Black and brown people when they come to Graham.”

Griffin described how, on June 4, when she and others attempted to rally in Court Square in protest of the murder of George Floyd, “we were immediately told to disperse by a Graham police officer who cited an unconstitutional and now repealed ordinance.”

The following day, she and her fellow protesters returned “a hundred strong, abiding by city rules to keep moving, stay on the sidewalk, and only tour Graham,” but were still not allowed to protest.

“Fifteen days later, Neo-Confederates gathered in Court Square, many armed, and were not made to disperse for hours, even after they assaulted two people. Commissioners, do you not consider this a double standard? In the last four weeks, I have lost count of the number of threats of violence, intimidation, and call to arms that neo-Confederates have directed at peaceful protesters. ACTBAC, once identified as a hate group, continues to occupy Graham in an effort to preserve their Southern heritage and their monument. A monument that currently stands at the steps of the courthouse and the county seat, a monument that clearly does not belong to the people nor represent the future the increasingly diverse population of Alamance County desires”

Graves agreed with Griffin’s (as well as 50 Alamance County officials’) description of the monument as a public safety hazard and said he had been lobbying for years to have it removed to a museum.

Until the statue is relocated, Graves said, “we are risking the lives of our law enforcement—we are depleting the coffers of our county, and I just want you all to think about this: when those law enforcement officers come out there and engage with the protesters to protect a piece of cement, they could get the COVID virus. And then, who would you have to protect the living? We are putting our officers’ lives at risk and I think we just need to do the right thing and lead by example and protect our county and protect our citizens.”

After Graves spoke (via a phone call), Galey asked if there were any commissioner responses to the public comments. None indicated any.

Stating that the board had “been advised by the county attorney not to make comments related to pending litigation,” Galey moved that the meeting concludes with the County Manager’s report.