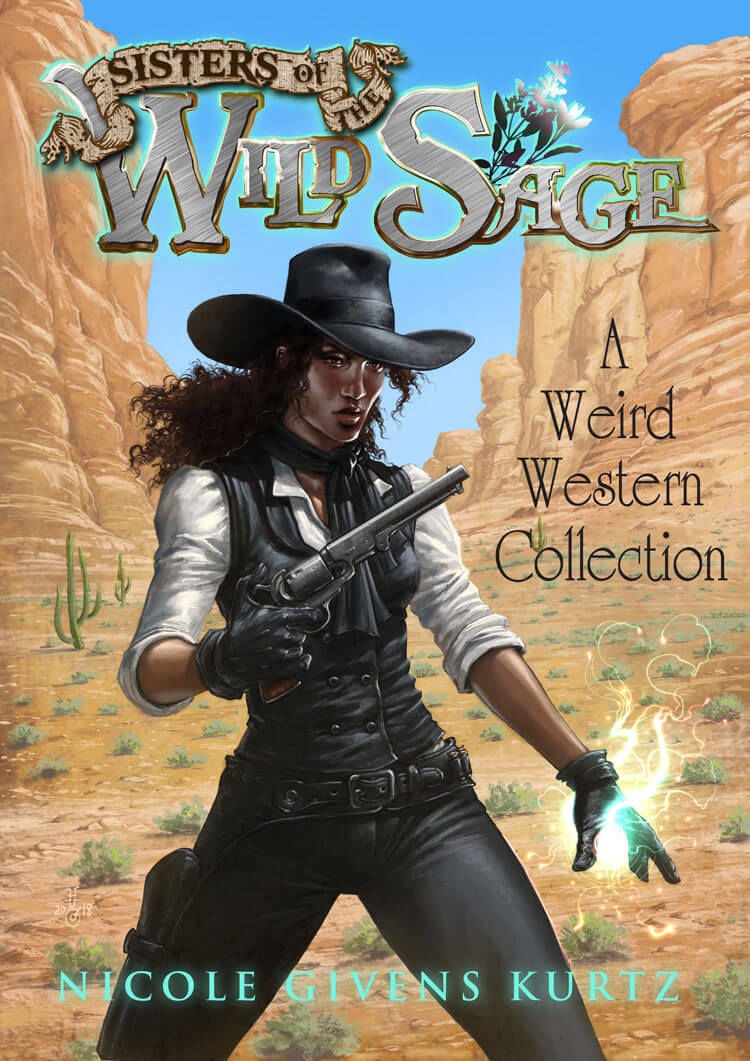 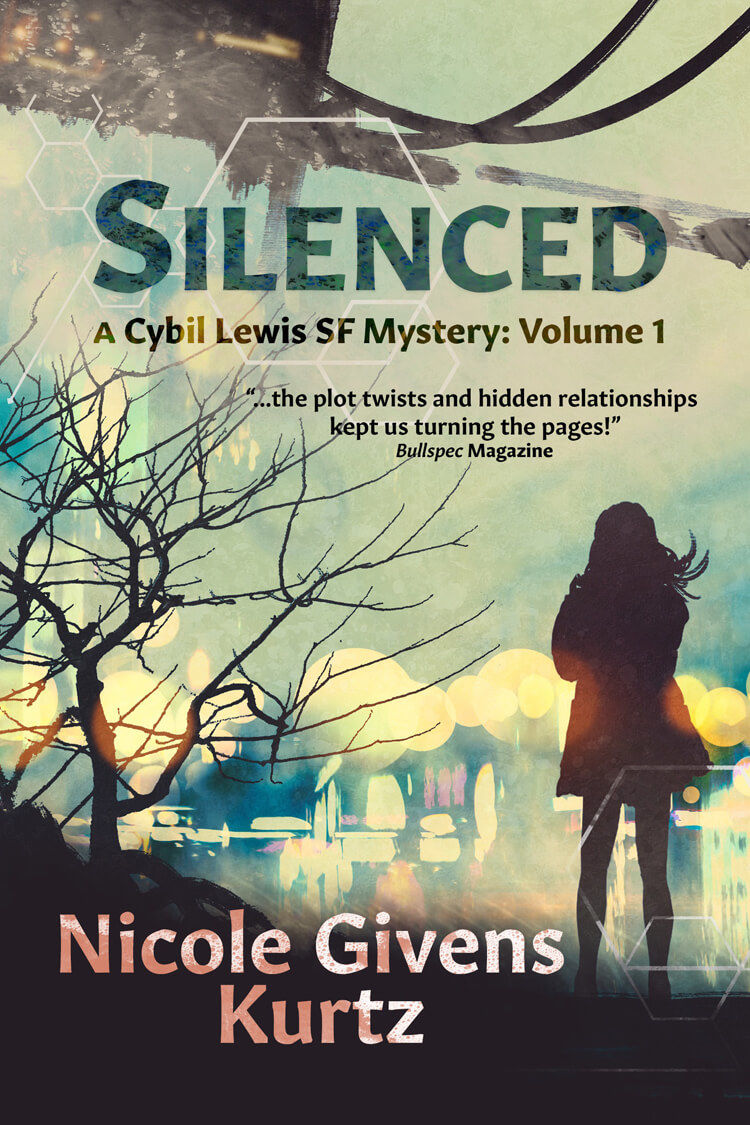 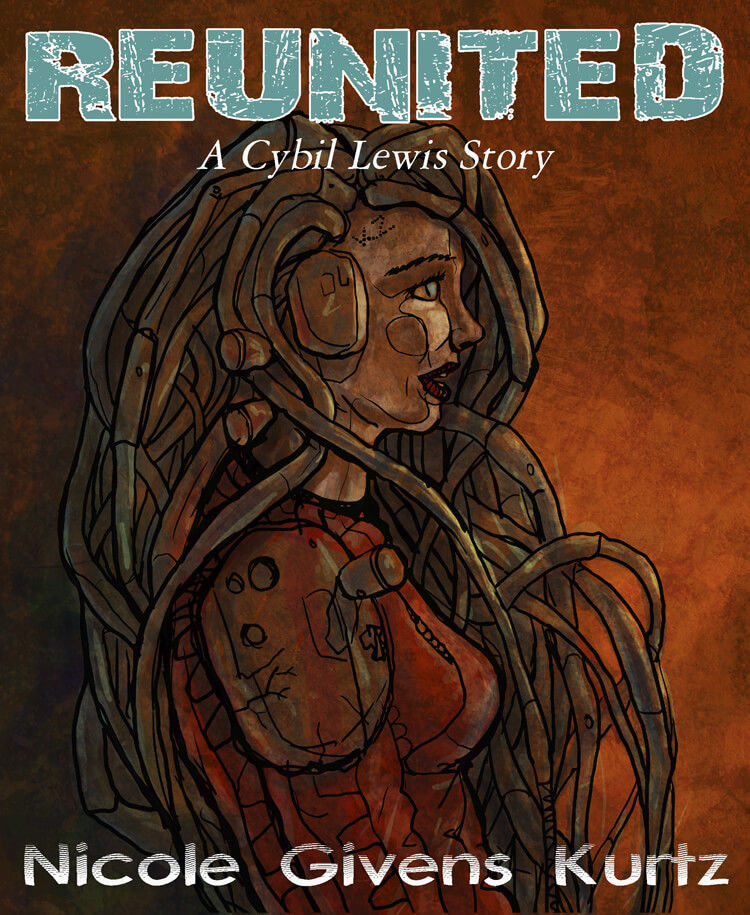 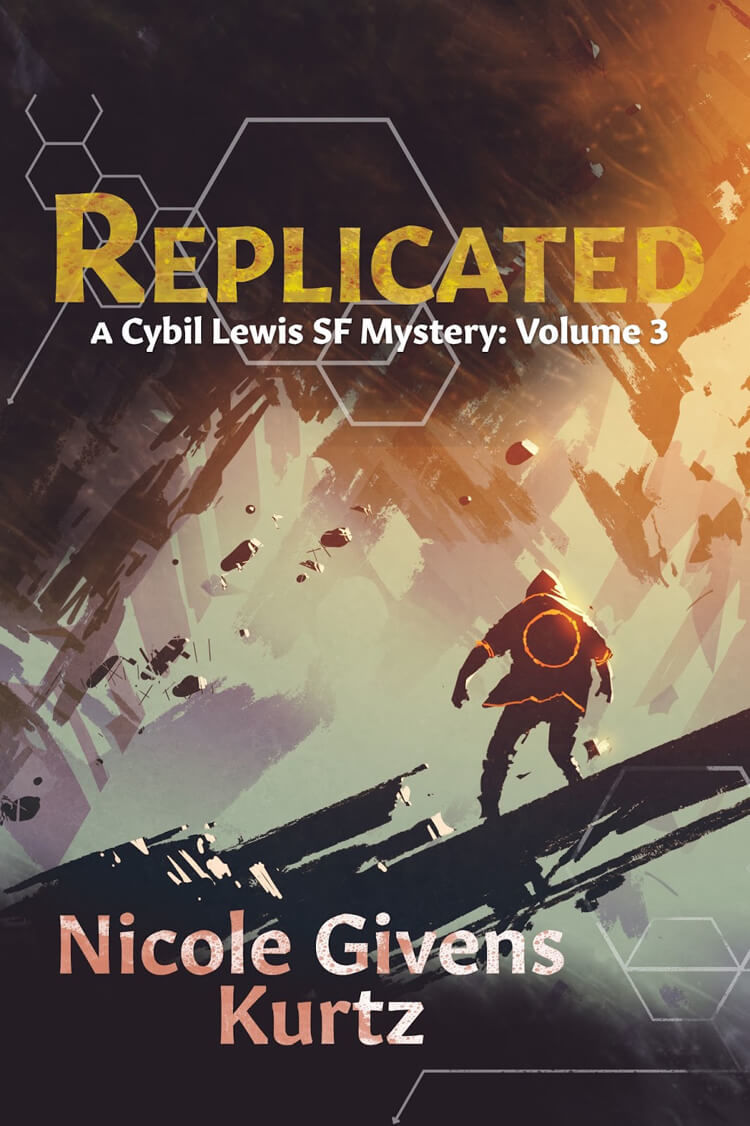 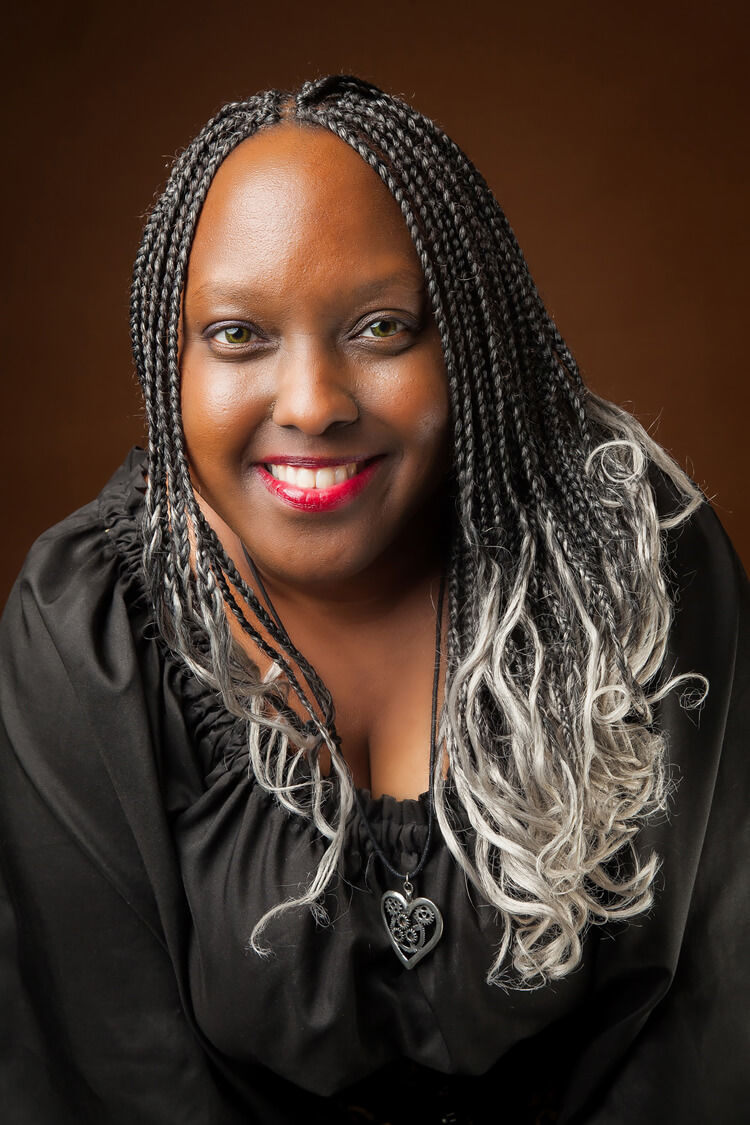 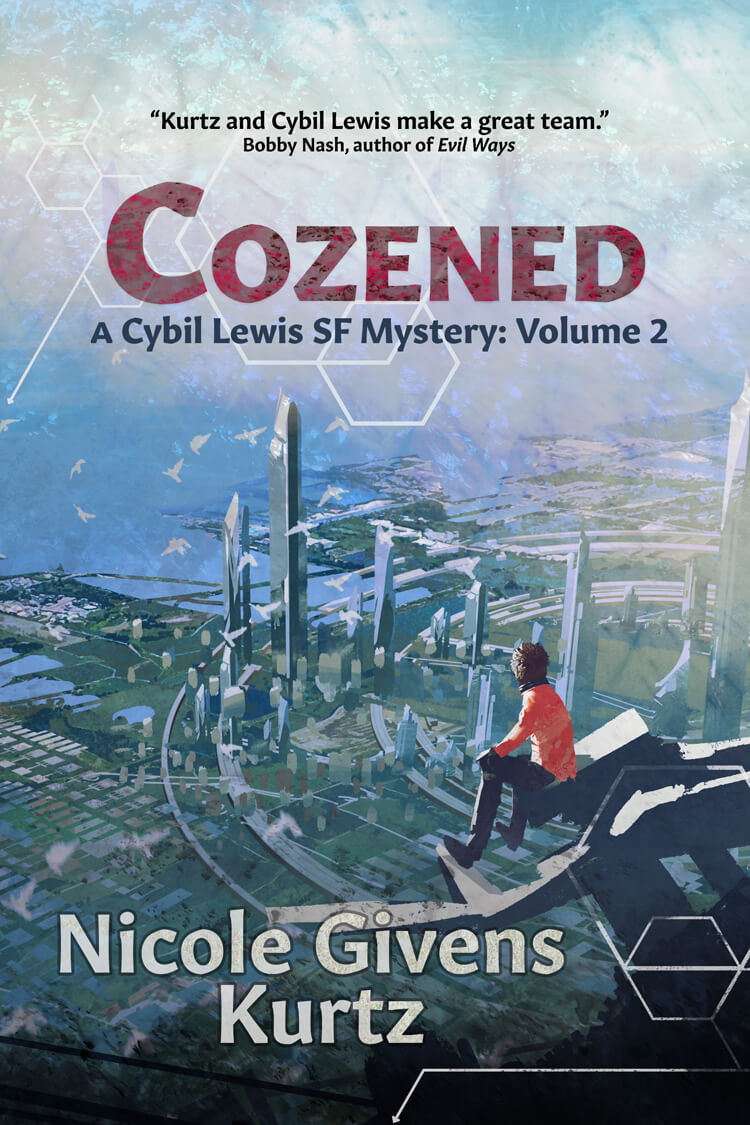 Nicole Givens Kurtz is, like me, someone who grew up watching Westerns but went on to professionally write science fiction, fantasy and horror.

But Kurtz, who watched Clint Eastwood on VHS with her mother just as avidly as I watched John Wayne on broadcast T.V. with my father, belongs to a younger and more inclusive literary generation, which came of age at a time when the various subgenres of fantastic fiction are no longer perceived as the exclusive domain of white males (a generalization never true, but once widely promulgated).

Kurtz was born and raised in Knoxville, Tennessee, and lived in New Mexico before moving to North Carolina. She now resides in Kernersville and Rock Hill, South Carolina, commuting from both to Charlotte, where she does customer service for a tech company. But at her keyboard, she travels much farther, regularly ranging between a divided and deadly future urban America and an equally perilous 19th-century Southwest.

She is the author of six novels. These include a near-future noir trilogy about tough private investigator Cybil Lewis, who solves crimes in the District, the fragmented city that was once Washington D.C. Kurtz told me that “Silenced,” her 2008 first novel about Cybil, was a major milestone in her career and one of her proudest achievements.

“It earned me a three-book contract and an advance,” she wrote in a recent Facebook message. “It’s also rare in the pulp noir genre [due to its] black female protagonist.” She compared her tough takes-no-crap heroine to a female Shaft, but living and practicing her dangerous profession in a mid-21st -century America that’s suffered a second civil war.

Kurtz’s short fiction has been published in over 40 magazines and anthologies and nominated for EPIC, Dream Realm and Fresh Voices in Science Fiction awards. She also founded the Kernersville-based publishing imprint Mocha Memoirs Press to provide more diversity in science fiction, fantasy and horror.

Kurtz first discovered science fiction by watching Star Trek with her father. Both her parents were also fans of horror movies. In a 2015 guest post on the blog of writer John G. Hartness, she wrote that her folks loved “to watch the carnage unfold on our home television set until the wee hours of the night,” then “go to the Waffle House® for breakfast.” But it was her mother to whom she owes her love of Westerns, a genre that has been stereotypically (if inaccurately) more associated with dads and sons than moms and daughters.

“Imagine a young black girl in a housing project watching these men settle scores with the fastest pistols in the West,” she told Atlanta Retro when she was a guest at Blacktasticon last year. “As a writer, my Weird Western stories are rooted in the theme of freedom.”

The “Weird Western” is a subgenre that, while it brings supernatural (or, sometimes, science fictional) genre tropes to the 19th-century Southwestern United States, often represents that region’s diversity more accurately than traditional and ostensibly more “realistic” stories of white male cowboys and gunslingers did, In the harshly beautiful, deadly dangerous and sometimes literally magical landscape of Kurtz’s supremely Weird West, freed slaves, Native Americans, Chinese immigrants and white Easterners and European immigrants interact without the rigid social stratifications of the “civilized” society on the other side of the Rockies.

Kurtz’s Weird Westerns are influenced by the six years she spent living in New Mexico, where she fell in love with the Zuni River Valley and the high deserts of Gallup, and with the cultures of the region’s indigenous peoples. Her stories set in this landscape have appeared in such anthologies as Straight Out of Tombstone, Six Guns Straight from Hell, and Lawless Lands: Tales from the Weird Frontier. This April, Sisters of the Wild Sage, a 225-page collection of her Weird Western short stories, will be published by Mocha Memoirs Press.

The title Sisters of the Wild Sage riffs on Riders of the Purple Sage, the 1912 novel by Zane Grey that essentially created the modern Western as we know it. Kurtz told me that this upcoming book is her other proudest achievement so far, due to it being her first story collection, and because it “is unique in that it places black women at the front of the Weird West.”

Perhaps the most popular Western movie of recent decades is Tombstone, about the famous 1881 gunfight outside (not actually in) the O. K. Corral in the Arizona mining town of that name. But the best-remembered duel in that 1993 film actually takes place later, when Val Kilmer’s deadly drunken dentist Doc Holiday drawls “I’m your huckleberry” as he faces down Michael Biehn’s murderous Johnny Ringo.

Another man with a variant of that name became the center of an online controversy involving Charlotte’s popular and long-running science fiction convention ConCarolinas last year. This was the conservative military science fiction and political action thriller writer John Ringo, whose announcement as Guest of Honor caused some other scheduled guests to boycott the convention.

Many of them cited Ringo’s 38-page vituperative rant about the women who allegedly interrupted him at a 2006 Virginia convention (in which he also devoted several paragraphs to the breasts of another woman in the audience). They also took exception to a 2015 Facebook post by Ringo, in which he accused “Social Justice Warriors” of “destroying science fiction” and stated “White males have dominated the planet’s art, culture, music, politics and wars for centuries” despite being “seriously outnumbered and almost always seriously outgunned.”

Kurtz was one of those who announced she would not attend the 2018 convention, despite being previously announced as a guest. I asked her if she planned to attend this year’s ConCarolinas, which will be held May 31 through June 2 at the Hilton Charlotte University Place Motel.

“There is an entirely new board and new convention committee this year,” she wrote back, “so I am going to go and see if they’ve done anything differently. I know firsthand from speaking with board members and programming directors they are very interested in increasing diversity and fostering an open, collaborative, and safe environment. I am going to see the changes put in action. The board has stated they wanted to show fans that what was shown last year wasn’t who they are as a convention.”

John Ringo’s publisher is Baen Books, the science fiction and fantasy imprint founded in 1983 by conservative editor Jim Baen. Headquartered in Wake Forest and distributed by Simon and Shuster, Baen Books is also the publisher of several writers associated with the anti-diversity “Sad Puppies” movement formed as a reaction to what its members claim is the negative influence of “social justice warriors” on their genres. Although the Sad Puppies have repeatedly proclaimed their manifesto of restoring what they call the classic virtues of old-fashioned action-adventure storytelling to science fiction and fantasy, few of them write nearly as well as the best of the 1930s and ‘40s pulp authors they claim to admire.

Last July, Baen Books published the Weird Western anthology Straight Out of Tombstone, edited by David Boop. It included Kurtz’s story “The Wicked Wild.” I asked her how it felt appearing in a book from the same publisher as John Ringo.

Kurtz replied that she and the book’s editor David Boop had been friends for decades. “I trusted him with my story, and with the material.” She also said that Straight out of Tombstone wasn’t a typical Baen publication. “I think they were surprised by the success of it. Baen is associated with the Sad Puppies, but I am not sure they want to just be known as the publisher of Sad Puppies authors. They have diverse titles in their catalog, so I didn’t worry about it too much, because I trusted my editor.”

One publishing credit that Kurtz is particularly proud of is “Sycorax’s Daughters,” edited by Kinitra Brooks Ph.D., Linda D. Addison, and Susana Morris Ph.D. The book, a 2018 finalist for the Horror Writers Association’s Bram Stoker Award, is a groundbreaking anthology of stories and poems by black female writers. Its title references Sycorax, the exiled African witch who gave birth to Caliban, the half-human/half-monster servant of the magician Prospero in Shakespeare’s The Tempest.

Kurtz gets her love of monsters from Maurice Sendak’s classic Where the Wild Things Are (another influence we have in common), “the first work of fantasy I read as a child, and which I still regularly read.” But, she told me, her gateway to adult horror fiction was Stephen King’s Salem’s Lot. “I had to be about 10 or 11 when I found it in the adult fiction section of our library. I had outgrown all the ‘children’s books,” and had secured proper permission to read the adult books.”

I asked her what that had been like, as reading the novel when I was in high school had given me a nightmare, albeit one inspired by the apparently haunted house the book’s protagonist enters as a kid rather than the vampires he encounters as an adult. Kurtz said that she found V. C. Andrews’ notorious Flowers in the Attic, which she read shortly after the King novel, much more frightening. “It was morbid and violent and strange, and scared me to death.”

But, she explained, for a kid growing up in public housing projects, nothing on the page was as frightening as the real world, where she saw people die from violence or drugs, and in which the Atlanta child murders dominated the T.V. news cycle. Horror was an escape from that.

I asked Kurtz to give a shout-out to a new(ish) author whom she thinks should be better known. She named Eden Royce, whose Southern gothic fantasies are described on Royce’s webpage as highly influenced by the Charleston-born author’s background as a “Freshwater Geechie” who “grew up around rootworkers and hoodoo practitioners.”

When I asked, “who is your favorite current writer of Weird Westerns?” Kurtz answered “me!” That was a joke, but she’s clearly enthusiastic about her 21st-century approach to a subgenre with strong ties to both her childhood and the real history of this country.

For more details about her published novels, her upcoming Sisters of the Wild Sage collection, and her future plans check out her webpage Other Worlds Pulp.