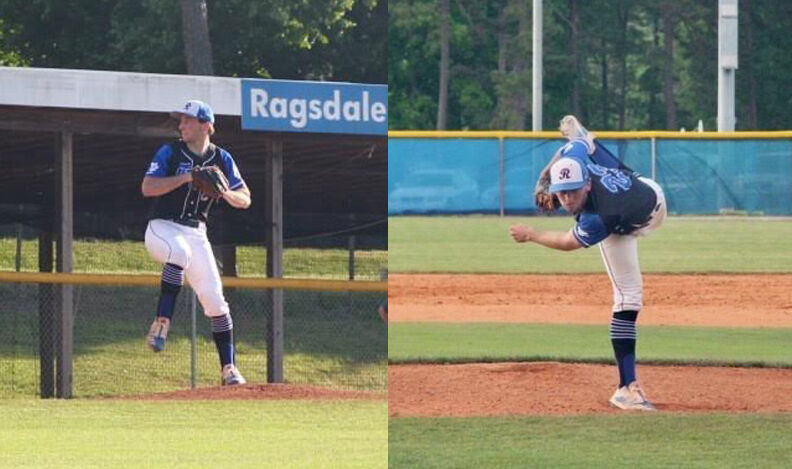 Win Scott shows his form during the perfect game he pitched against Grimsley High School on May 5. 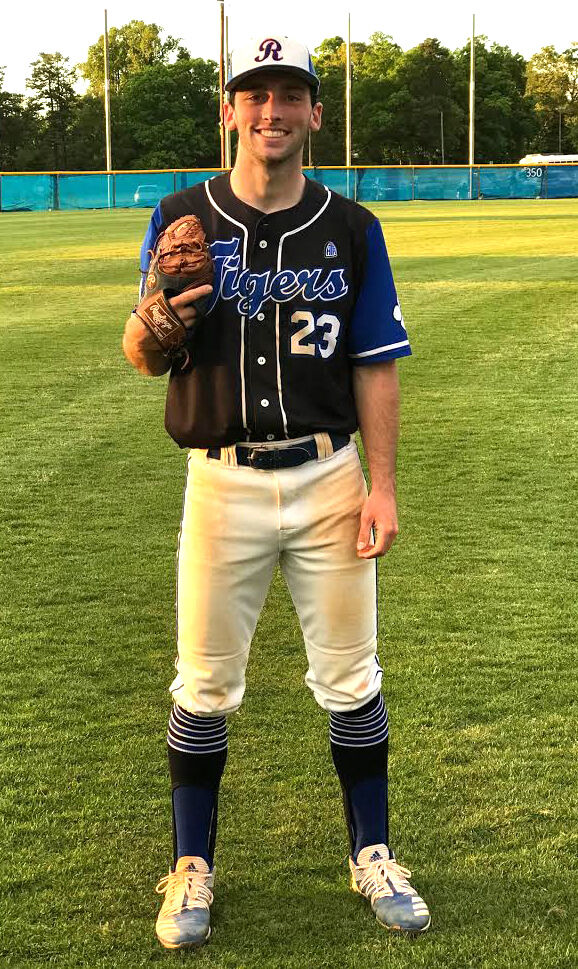 Scott was all smiles following the historic game.

Win Scott shows his form during the perfect game he pitched against Grimsley High School on May 5.

Scott was all smiles following the historic game.

The date to remember is May 5, 2021. The occasion is the baseball game between Ragsdale and Grimsley high schools. The reason it is important: on that date, during that event, Ragsdale senior Mark Winfield Scott pitched a perfect game.

Not to be confused with a no-hitter, where the opposing team gets no hits, a perfect game means no one on the other team gets on base at all. There are no hits, no walks, no one hit by a pitch and no errors.

“Coach (Donnie) Maness’ dad handles the score keeping and pitch count,” Scott said. “After every inning I go up to him and ask how many pitches I have. That gives me a good measure of where I am. Following the fourth inning, I had 48 and realized it was getting really serious. My teammates got further away from me on the bench and a lot quieter.”

Scott did not allow what was unfolding to distract him from the game, however.

“I think the coaches and fans were more aware and nervous than I was,” he said. “I had adrenaline going so it did not bother me. I was so focused, it was just me and my little world.”

But Scott credits his catcher Sam Ross with giving him confidence to throw the pitch calls from Maness and pitching coach Chris Perry, and his teammates with getting the hits needed to seal the win.

As can be imagined, perfect games are rare. Only 23 perfect games have occurred in Major League baseball history out of almost a quarter million played.  Scott’s was the 59th perfect game in NCHSAA history.

“Mine was the first seven-inning perfect game in Guilford County,” Scott said. “Many of the others in North Carolina were five-inning games that were stopped early (likely due to lopsided scores).”

Unlike major league play, which includes nine innings, high school games have seven. To make the fact Scott pitched an entire perfect game even more special, he was up against a quality team that had five players signed to play college baseball.

According to the NCHSAA record book, Scott is the 21st person to also throw at least two no-hitters.

It is little wonder that many North Carolina colleges were vying to recruit the high school athlete. He opted to play baseball for North Carolina State University.

“I wanted to play for a big school in a big city,” Scott said. “I also thought I had the opportunity to actually play sooner at State.”

Coach Clint Chrysler, the pitching coach at State, maintains contact with Scott every few days to see when he will be pitching.

“My dad had my phone while I was playing the May 5 game,” Scott said. “When I got it back, it was blowing up with congratulations. I texted Coach Chrysler to let him know what had happened.”

Unlike high school, which limits pitches to 100 per game and requires five days of rest for anyone pitching over 80, there are no limits to the number

of pitches in a college game.

But Scott acknowledged that coaches are careful to look out for their players to keep them healthy.

Scott’s baseball career began at the tender age or four when his parents Mark and Marcia signed him up to play tee-ball with the Jamestown Youth League. Games were held on the fields behind Jamestown Elementary School.

“It was apparent very early that his arm was special,” Mark said. “The coaches were shocked at how far he threw the ball.”

The next year, Mark requested that, if possible, his son play for a coach with a baseball background because he wanted him to learn from someone who knew all the fundamentals. After one practice, he asked if Win could play with the older kids coached by Richard Walls and the league allowed the transition.

The rest, as the saying goes, is history. Scott continued to play baseball, participating on his middle and high school teams – primarily as a pitcher. He also ran track, played basketball his sophomore year and football his senior year. Although he enjoys all sports, from the time he was in middle school, baseball has been his favorite.

Scott plans to major in business administration. Although it is a competitive market, he thinks he can bring something to the table that no one else does. Plus, he feels there are always going to be business jobs.

But his ultimate career goal would be to play pro baseball. Due to the credits he has achieved through his high school academic classes and by participating in summer school sessions in college, Scott possibly could graduate after his junior year and be eligible for the draft.

For now he is happy with his successful senior season. The 6- foot 2-inch, left-hander has struck out 30 batters in 13 innings. Of course, the perfect game was the highlight of his play. Not only were his mom and dad at the game, but his grandfather, Wes Scott, was also there to witness the event.

“Win was so dominant that night that I did not get nervous until two outs to go,” Mark said. “His mother is the calm one who had the presence of mind to video the final out and the team celebrating with Win.”

Scott’s record of the first to pitch a perfect game in Guilford County high school history during regulation innings cannot be denied. The umpires of that game signed a game ball and gave it to Coach Maness to display in the school’s trophy case. Scott wants to get his coaches and teammates to sign the ball as well.

Although the odds of pitching another perfect game may not be in Scott’s favor, he is undaunted by the lack of probability.

“We will have to see,” he said with a smile.