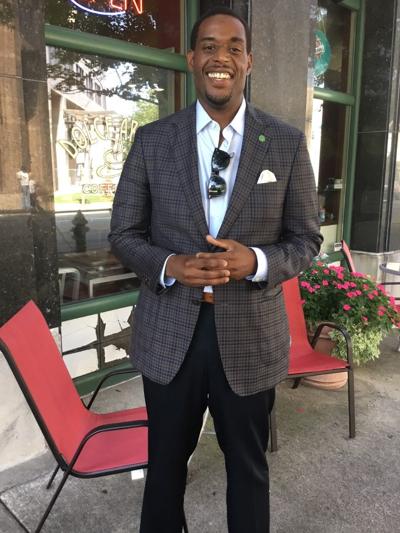 “In terms of ethical standards, I am meticulous,” said District 3 City Council representative and Brooks Pierce attorney Justin Outling, who is challenging incumbent Nancy Vaughan in next year’s mayoral election.

Outling made that statement as an explanation of why he has recused himself from council votes over eighty times since 2015. Those recusals were all due to his position at Brooks Pierce, as that firm’s clients have included the City of Greensboro. His recusal rate has increased since 2017 when he was made partner.

“If others applied the same exacting standards I apply to myself, you’d see a lot more recusals. There have been situations where boyfriends or ex-husbands made presentations to the council, in which I think a reasonable person would say there should have been a recusal. Other people can answer for their own ethical issues, but mine are above reproach.”

Outling references his ethics as often as a conservative Christian politician references faith.

“For me, my ethical compass, and what I think is right, that’s the standard that I apply. When you have high ethical standards and one of your colleagues has a connection, even with a party on the opposite side of a transaction with the city, you should recuse yourself.”

Outling also said it’s less a matter of how many times a council member votes, but how much difference those votes made. “Because of my participation and involvement on council, there are concrete things that have improved our community. I’m very proud of those. For instance, I worked with the previous city attorney, other lawyers, and community members to write the first North Carolina policy that provided for the release of body-worn camera footage to the public.”

One example of such footage depicted the unprovoked 2016 beating of Dejuan Yourse by GPD officer Travis Cole, which made the Washington Post.

“Because of the policy I worked to create, we were able to release that body-worn camera footage to the community and people were able to process and think about ways in which we could move our community forward.”

The first was the case of Zared Jones, one of four young Black men tased and arrested in a 2016 encounter with GPD Sgt. Steven Kory Flowers and Officer Samuel Alvarez outside the Boiler Room on W. McGee Street. All charges against the four men were dropped, but the officers were cleared of wrongdoing.

The Greensboro Police Community Review Board petitioned Guilford County Superior Court to release the BWC video. Judge Susan Bray ordered that the video be released to city council members, but imposed a gag order preventing them from discussing the video with the public. In September of 2019, the City of Greensboro asked the NC Supreme Court to lift that gag order. Outling cited that as an example of why transparency is important.

“The public deserves and I think is entitled to information about the happenings of the city and the way city government works. The court decided that the city council could look at the video but could not speak about the video, but almost by definition, if the city council is looking at that video, they need to have the ability to speak about it. Our job is to move this forward for a more equitable outcome. Without that transparency, that’s almost impossible.”

The instance in which the city arguably fought against transparency occurred earlier this year. Plaintiff attorneys for the family of Marcus Smith, who was fatally hogtied by eight GPD officers in 2018, requested to be allowed to view BWC videos depicting 50 previous instances in which the controversial and dangerous restraint was used. In June, Judge Loretta Briggs ruled that the city must produce those videos to Plaintiffs, but not without multiple objections by the city.

Outling alleged that there was a crucial difference between the videos in the two referenced cases.

“I won’t get too lawyerly wonky about it, but there’s an actual state law that regulates who has to be informed when body-worn camera footage is released, as those depicted in the footage have to be allowed to object to that release. My understanding is that city attorneys believe they were left in a no-win situation; either violate state law and release this information or, prospectively, release that video to the public at large.”

I pointed out that the attorneys for the Smith family did not request that footage be released to “the public at large.” Instead, they asked to be allowed to view the footage, to observe the conduct of the officers and how detainees were physically impacted by being hogtied.

“Each party was trying to get the best outcome for their respective client,” said Outling. “The city’s position was that incidents not directly involving Mr. Smith were not relevant. That’s what attorneys are going to do. It wouldn’t be ideal advocacy for the plaintiff’s attorneys to not fight for the release, as it would not have been ideal advocacy for the city’s attorneys to not fight against it. I don’t think that either Plaintiff or Defense has done anything bad. What each side did, and I say this as a litigator, is literally litigation.”

I asked him about the request to the City Attorney by council members Sharon Hightower, Michelle Kennedy, and Yvonne Johnson that council be allowed to view the fifty videos.

“My understanding is that the city attorney has consulted with his officials and that they believe it can be made in a single request. Part of the fear was that there might have to be fifty separate requests. My understanding is that that determination has been made. I’m not sure whether or not they’ve actually made a filing and a submission to the court actually making that request. I was advised when I talked with staff was that would be done.”

As of publication deadline, City Attorney Chuck Watts has not responded to my inquiry as to whether or not that filing has been submitted.

Outling also said that he wanted to see those videos himself.

“Any way you look at it, it’s really important for us to be able to see the same information that the attorneys are seeing. So, I partially agree with Michelle and the rest and think it’s really important that we see the video. It could be a major part of discussions about how the case is resolved.”

Changing subjects, I asked him to name another achievement that he’s proud of.

“My leadership in revising our housing ordinance. Previously, where there was a property that was in blighted and dangerous condition, there were only two options: knock it down or let it remain a blight on the community. After I joined council, I led work on a third way, in which, when bad property owners refuse to make improvements, we make those improvements and take out a first priority lien on the property. That’s something I’m very, very proud of.”

This is when I asked him about the City’s lawsuit against the Agapion family, which resulted in Outling revealing that the lawsuit had been resolved on what he described as “very favorable terms” to the defendants, something with which he said he disagreed. I told him that I was not aware the suit had been settled in March.

“Almost nobody is. That’s why I’m running. There’s been no transparency. It was simply let’s act like we’re being really tough, take them to court, people stopped paying attention to it or don’t ask follow-up questions, and we quietly settled the case on terms favorable to the Agapions months ago with nary a peep.”