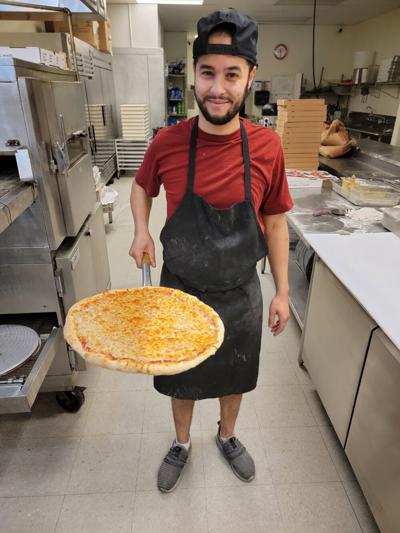 “Everyone has to eat. I know I do,” said Maher Isa, co-owner of Moe’s Pizza and Subs II.

That’s the idea at Moe’s Pizza and Subs II, located at 6004-F Landmark Center Boulevard, in Greensboro. That’s why the pizzeria offers kosher substitutions for those steering clear of any pork-based meats.

Isa’s family originated from Ramallah, Palestine where he dreamed of providing for his family, both in the United States and back home. He first opened a car lot with his brothers to make ends meet, Triple-A Motors located on 605 Edwardia Dr. in Greensboro, but Isa knew he had something else in store for himself.

“Before Moe’s, it was Dobros Pizza and Grill, and I admired their food and the hard work they put in every day. I passed by them constantly on my way to work and noticed how busy they always were. I wished to open up a pizzeria like that, where people would say ‘wow, I’m coming back’ or ‘let’s go pick up Moe’s today,’” Isa said.

Deciding that he wanted to dabble in the world of food, Isa contacted his long-time friend Mohamed Khireddine, who owns Moe’s Pizza and Subs I on 2832-C Randleman Road.

“I’ve been eating at Moe’s for six years. They have the best damn calzone in town, so I asked Mohamed one day if he’d be interested in expanding his business to multiple locations even though at the time I had never worked in a restaurant setting before,” said Isa.

Khireddine and his father Fatah, originally from Algeria, have been running their father and son business for quite some time and believed it was the right time to franchise.

“My father speaks little to no English, but he knows how to throw it down in the kitchen. He has been working in the food industry since he arrived in the United States, cooking a variety of dishes. I wanted to provide him a space that was his, and now I’ve provided him two,” said Khireddine.

Moe’s prides itself on its halal and kosher substitutions, using beef products in place of any pork-based meats.

“I’ve been going to Moe’s since they opened, and the steak stromboli is to die for. I don’t eat any pork products because of my faith, and the pizzeria uses halal beef for their pepperoni and sausage pizzas, and I absolutely love it,” said Michael Neel, a regular customer at Moe’s.

“We serve a large Muslim population, as we are Muslim ourselves, and we have the tools to be inclusive,” said Isa. “As we continue to grow, we are pushing for our involvement in the community as well. We have to remember that food brings people together, it’s not only about profit but about profit sharing.”

Khireddine said what began as something for his family has evolved.

“I started this business for my family and to continue a legacy for myself, but I continue to grow because I know we are bringing joy to people in a variety of settings and events around the Triad,” shared Khireddine.

Isa said that the franchise is looking at adding desserts to their menu.

“We are about to launch our new dessert pies. One pie we created consists of a cinnamon-based crust with Nutella and white chocolate with fruit on top.”

Moe’s expects to continue franchising throughout the Triad, making its way around North Carolina one slice at a time.