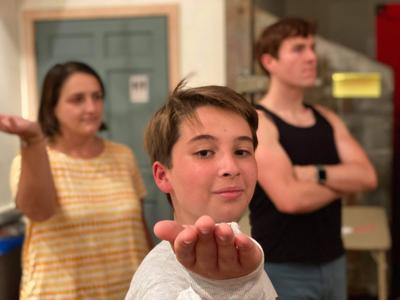 A youth-inspired theatre founded in 2011 by Erinn Dearth, Spring Theatre exists to empower and challenge the community to experience the energy, emotion, and adventure that springs from extraordinary theatre. Spring Theatre helps established and aspiring theatre artists reach their full artistic potential through mentoring, main stage productions, theatre camps, workshops, and master classes. As a result, Spring Theatre’s youth are confident community members who are prepared for leadership roles including, but not limited to, performing, writing, directing, and staging their productions. The family of Spring Theatre fuels the creative spirit of the entire Triad and beyond.

As part of their “Season of Change,” mentioned in their press release, Spring Theatre in Winston-Salem, will be producing a world premiere play about love and dealing with loss.

Gil And the Wild One, written by Joe Heaney from Minnesota is a story told through the eyes and minds of two 11-year-old kids as they work to maintain the adventure and playfulness of youth in the face of life-threatening illness. Rife with humor and poignancy, this play strives to remind us of the importance of companionship and the strength of imagination, while leaving us with the ever-important lesson that we do not need to live forever to matter, we just need to matter to somebody else.

When choosing the season, Dan Beckmann, Artistic Director, felt it was important to include this new work. “I’ve been enamored with this play since I was treated to its first draft back in 2011,” Beckmann said. “It’s that perfect kind of theatre experience which combines pure, childlike play with a really important message. It’s a work that lets us escape the real world while also equipping us to take on some of its tougher challenges when we return.”

The small cast consists of James Crowe, Lauren Rahill, Trevor Ketterling, Paisley Holland, and Jackson Colo. The roles are challenging, as each cast member plays both a larger-than-life character in the imaginary world and also a very realistic character in the hospital room in the show.

“I think that one of the coolest things about working on an original work is that you get to play a character that no one else has before,” Rahill said. “Since many of the characters in this show are from a fantasy world, it really is starting from scratch on developing them. It’s definitely an exciting process, but also quite a bit of pressure, as you always want to make sure that you are doing justice to the playwright’s vision of the character.”

Beckmann also mentions, who also serves as Director of the piece, “Don’t be deterred into thinking this is a production only to be enjoyed by kids and their parents. The narrators are children, it’s true, and of course, Spring Theatre always places youth at the center of its purpose, but Gil and the Wild One is a play meant for everybody. It’s great work.”

Ketterling, one of the cast members, also said, “Gil and the Wild One is exceptionally relevant right now as it delves into a child’s imagination and shows how they utilize it to deal with the changing world around them. It is impossible to think there aren’t coping strategies like this being used by children dealing with a world full of intense experiences, both good and bad.