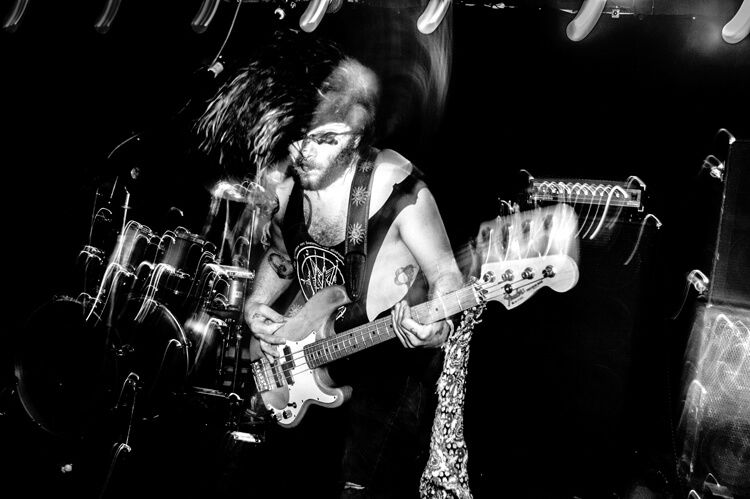 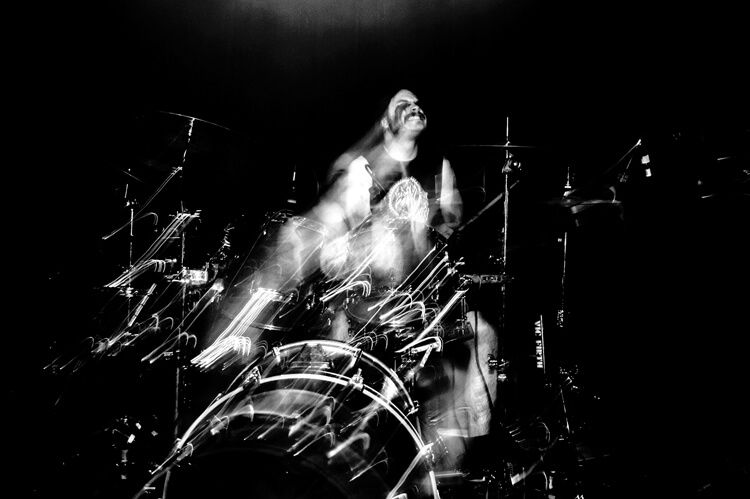 Paezor is a Greensboro metal trio pounding fists to the pavement and putting it out there, with shows all over the Carolinas, new recordings, and an appreciation for gigs and the road.

The dudes are fresh from performing at Medium Well in Hell, a Raleigh black metal festival which celebrated its fifth year. “It was a blast as always,” said vocalist and guitarist, Robb Paquette.

Known briefly as Novecircum, they shed the moniker over the spring. “It just didn’t fit,” said bassist Matthew Goshow. “Novecircum roughly translates to Circle Of Nine. Paezor is a demon of the earth who takes vengeance on those who exploit the less fortunate,” he added.

Paezor rides in-line with black metal cannon: Elements of fantasy and fury intertwine. “Very similar to Immortal and their Blashyrkh lore,” Paquette explained. “We use those elements as metaphors and allegories of rebellion and unrest, overthrowing oligarchs and saying ‘fuck authority,’” Paquette added.

Inspiration is rooted in the real world, and Paezor boils down to a group of horror freaks navigating the dystopian dream.

“I’m heavily influenced by the terrible state of things in the world today,” Goshow said. “A lot of it has to do with destroying the Old Guard,” he added, “and I’m just stoked to be in a band with friends of mine who share the same vision.”

“We’re spending our time getting our full-length properly recorded, and are releasing two splits with Triangle bands: One with Leachate, the other with Feral Spectre,” Paquette explained in his more matter-of-fact nature. A no-bullshit sort of dude, Paquette embodies sweet behemoth, Jack-of-the-artistic-trade and the union of the trifecta, having shared time as a doorman at New York Pizza with Goshow and as a bandmate in Dreaded with Stikeleather.

Juxtaposed to the wiry animals of the rhythm section, Paquette creates an unlikely pairing with righteous results.

Stikeleather rounds the group with a surprising mantra: “Fast is good but slow and steady wins the race,” he noted of his drumming style. “I want to hit hard when needed, but still be tight when in a groove.”

Paezor remains all about reigning it in and raining down focused and straightforward.

“Dreaded was more traditional high energy black metal in the vein of say, Marduk or Dark Funeral,” Paquette explained of past projects, “Paezor lands in the middle of the two: Open, but not too ‘out there,’ musically.”

“I grew up an industrial kid, NIN and Ministry were the reasons I actually started recording and playing music,” Paquette noted, “I’m still a big fan of industrial bands like Skinny Puppy, which definitely helps influence my production style.”

Goshow came to Greensboro from Philadelphia after touring the Triad as a teenager. He’s run the gamut of genres: Polit-punk in Big Attack, Oingo Boingo-esque surf times in Damn Frank and the Red Hand, hip-hop Hulk Homeless, the collective of DOG, and more. “Paezor is entirely different from anything I’ve ever done, and I love it,” he said, “I’m really glad to grow as a band and musicians with these two dudes.”

“I’ve always wanted to be in a metal band but never really thought I had the chops, until recently,” Goshow admitted. “Speed Queen was my old band with A.J. from Atomic Cretins, and we had a lot of thrashy elements, but it was more like a fast punk band, so I’d say this is my first metal band and it’s a blast.”

In keeping the scope of destroying the old guard, Paezor is sharpening their skills as road warriors. “Traveling is important, and a big process of getting the music out there,” Stikeleather insisted. “You’ve gotta bring your music to the people,” Goshow added.

They’ll be joining Atomic Cretins, on tour from Philly, for their next show on Aug. 9 at the Milestone in Charlotte, with Asbestos Boys and Mutant Strain.

Paezor returns to the Triad for an underground Greensboro show with Xeukatre, Athame, Nagilum on Aug. 17; and a New York Pizza party with Little War and Instant Regrets on Sepy. 7; before trucking down to Greenville with Valar Morghullis and Strike the Tower on Sept. 17.

Katei Cranford is a Triad music nerd who hosts the Tuesday Tour Report, a radio show that runs like a mixtape of bands touring NC the following week, 5:30-7 p.m. on WUAG 103.1fm.