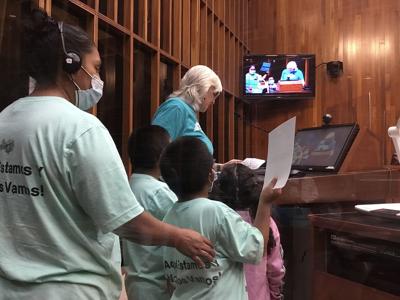 Supporters of the families living in Jamison Mobile Park Homes have stated to the press that developer Owls Roost Partners LLC intends to build student apartments on that site.  Several members of the Lindley Park Neighborhood Association allege that, when an attorney representing Owls Roost spoke at the Lindley Association’s April meeting about what the developer intends to build at 2510 Hiatt Street, the attorney stated that multiple three-story student apartment buildings will be erected on the site.

Jerry Wass, CEO of Owls Roost, has not responded to inquiries from YES! Weekly. Eden Bloss, Interim Senior Advisor to the Chancellor for External Communications at UNCG, stated that Owls Roost has not communicated with the university on this matter.

“We have not agreed to have the builder build an apartment for UNCG students,” wrote Bloss in an email.  “In fact, UNCG has no involvement.  Our leadership has never talked to the developer.  We are proud of our commitment to helping the local population through the Center for New North Carolinians, and are deeply committed to this important work in our community. It's important for us to ensure the community knows they have an advocate at UNCG.”

“I don’t want the place I call home to be ripped away from me,” said 17-year-old Francine Munoz-González through tears at the Nov. 1 Greensboro City Council meeting.

In July, Lynne Anderson, manager of Family Properties of North Carolina, sent the tenants of Jamison Mobile Park homes a letter stating that the 18 families who own or rent trailers on the Hiatt Street property had until September to get out. The reason for the eviction, alleged Anderson, is that she is executor for the estate of her aunt, Shirley Todd Jamison, who owned the mobile home park until Jamison died in 2017, and that Jamison’s will dictates selling the property and dividing proceeds among Jamison’s heirs.

In August, Anderson told the News & Record that the heirs are Jamison’s grandchildren. As previously reported, Jamison had no grandchildren. Anderson did not directly respond to multiple inquiries about this discrepancy, but her sister Becky O’Hare told YES! Weekly that the will requires the proceeds to be divided among Jamison’s “15 grand-nieces and grand-nephews.” According to Jamison’s obituary, these include Anderson’s and O’Hare’s children.

The property is contracted to be sold to Jerry Wass of Owls Roost Partners LLC, which intends to build an apartment building for UNCG students on the site. After the City of Greensboro informed Anderson that state law requires a 180-day eviction notice, Anderson extended the deadline to January 2022. Multiple residents allege that Anderson sold them their trailers only months before the eviction letter and that they spent their savings on renovating their aging but newly-purchased mobile homes, and cannot afford to move.

Anderson has not responded to queries about these claims, and Wass has not commented on Siembra NC’s request that he consider withdrawing from the sale so that residents will have the opportunity to buy their plots.

At Monday's meeting, which lasted five and a half hours due to a fire alarm and an hour-long presentation, a dozen speakers from the Hiatt and Lindley Park communities spoke against the Hiatt Street relocation while at least two dozen more supporters in the audience held #HopeForHiatt placards.

Some visibly wept as Munoz-González, a senior in the International Baccalaureate Program at Grimsley High School, tearfully spoke about impending homelessness and implored Council to help her family and neighbors.

“With our current financial situation, because my parents are of older age, we cannot afford a 30-year mortgage. I know they’re going to reach the age of retirement, leaving me with the question, will I as a first-generation college student, have to financially support my family while attending college? I don’t want the place I call home to be ripped away from me, because it was the one thing that makes me want to achieve greater things.”

The next speaker, Lindley Elementary teacher Jill Moore, wiped tears from her face and called Munoz-González “a hard act to follow.” Moore said that seven of her 47 ESL students belong to the threatened community, and introduced 5-year-old Valeria, 7-year-old Rafael, and 6-year-old David, who hugged closely to her.

“I urge Owls Roost Partners to consider what buying this land out from under these residents will do to these children, their families, our schools, and the diverse Lindley Park neighborhood in which this mobile home community exists,” said Moore, who urged council to “issue a public statement in support of the Hiatt Street residents.” Moore also asked Council for support in “applying for funds earmarked for affordable housing” should Owls Roost back away from the deal and allow the families to purchase their lots.

Cecile Crawford said that “Greensboro has an affordable housing issue, and new developments should support and not displace existing neighborhoods.” Crawford called mobile home parks “a source of affordable housing since the 1970s,” but noted this was the only one remaining in or near city limits. She acknowledged “you do not have the authority to tell Jerry Wass and Owls Roost to stand aside,” but asked Council to “stand in solidarity” with the community by asking Owls Roost “to remove themselves from the equation, and allow residents the opportunity to buy the land they have lived on for decades.”

A similar appeal was made by Franca Jalloh, founder and director of the nonprofit refugee-assistance organization Jalloh's Upright Services, who criticized Family Properties for “the homes being sold only months before telling the residents they have to move,” which she called “a plot to leave the residents defeated, with nowhere to turn to.” Jalloh asked Council to ask Owls Roost Properties to “step aside,” as “that’s an honorable thing to do.” She concluded by directly asking the Mayor and Council for help.

“We know you do not have direct authority to tell Jerry Wass and Owl’s Roost Partners to stand aside,” said Terrell Dungee, an organizer with American Friends Service Committee, but asked Council “to use your platform to support the Hiatt Street Mobile Homes by stating that current residents are the ideal buyers of the land.”

Haydyn Foulke, a tutor at the Center for New North Carolinians who works with the Bonner Center for Community Service and Learning, stated that Greensboro is ceasing to be a safe haven for refugees.

“What’s happening is a second round of forced migration. Families being resettled here do not have the housing support they need, such as fixed rent prices, and wind up being displaced all over again. I am scared that this is exactly what will happen to the group of Afghan refugees we are currently welcoming.”

Mayor Vaughan then asked former council member Michelle Kennedy, now Neighborhood Development Director, to speak on the issue. “I know that all of us are very concerned about all this, and we know how important this is to keep communities of interest together, and clearly, this is a community of interest.”

Kennedy told the audience that she also lives in Lindley Park, where the Hiatt Street mobile home community are her neighbors, but said the issue is complicated by the fact that the property went under contract in December 2020, and that there is a signed offer to purchase. Kennedy acknowledged that Anderson “did not provide proper notice to residents of that plan to sell, or of the time they needed to move,” but said there has been an extension, and the offer to purchase will close in January 2022.

“As I’ve had conversations with the legal representation for the developer,” said Kennedy, “there is no intention to back away from this contract.” This, she stated, leaves “no doorway” for the residents to purchase the property, even if the city provides American Rescue Plan funds.

Kennedy said the city has made referrals to Legal Aid and Neighborhood Development to “talk to folks about relocation,” and “I totally understand and respect” the community’s desire to stay together where they are. But, she continued, “that’s not a viable option,” as neither Anderson nor Wass “have the intention to back away from the contract.”

She said that, while relocation appears inevitable, the city may be able to assist with the financial burden.

“We certainly as a city and as Neighborhood Development have resources in place for relocation. I understand that some of the mobile homes in question may not be able to be moved. We have considered ways to address the units that aren’t structurally sound enough to be relocated to other areas. So, we stand as a city ready to assist in any way we can.”

Kennedy noted that, when the development plan “was approved by Zoning in a 7-0 decision in June,” there was no opposition, which she attributed to state law only requiring that property owners be notified. “Tenants may not have known that was happening, and it was not available to them to come to that zoning commission meeting to speak. So, to put it frankly, it’s a little bit of a systems failure.”

Kennedy stated she has been having daily “conversations” about this dilemma, and that Neighborhood Development is “ready to talk about land trust, co-op purchase options, all of those things with residents of Hiatt Street. I would love for you all to continue to be my neighbors.”

Mayor Vaughan then stated “we want to make sure that this community of interest stays together,” but offered no suggestions on how. “I would ask you to give us a little bit of time and find out who the point person is for the neighbors, for the community, so we know who it is that we’re communicating with.”

Kennedy concluded by stating that council will receive “a staff recommendation on ways to create some of these purchase options and first right of refusal options that are available for council to consider as local ordinances, to prevent this from happening in the future.”

“It's another example of council acting as if their hands are tied so they can try and avoid actually intervening, and makes me question who they truly serve.” Dungee called the offer to help with relocation “hollow, especially since the city has been actively avoiding meeting with neighbors and Siembra organizers these last few months.”