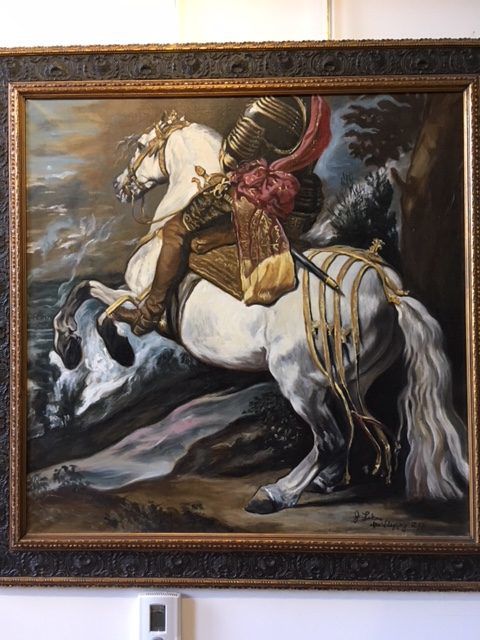 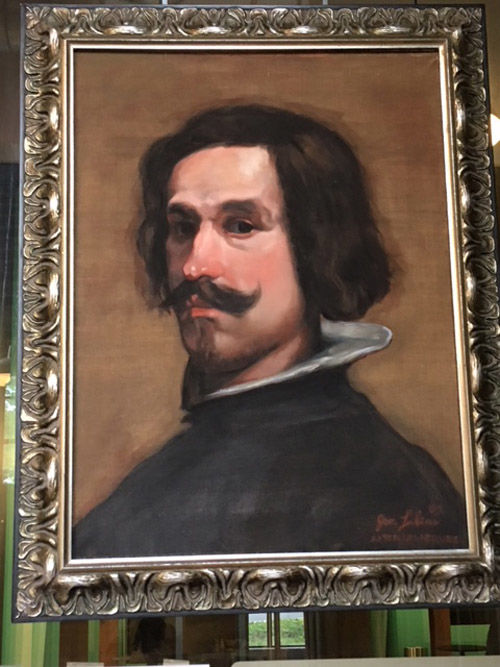 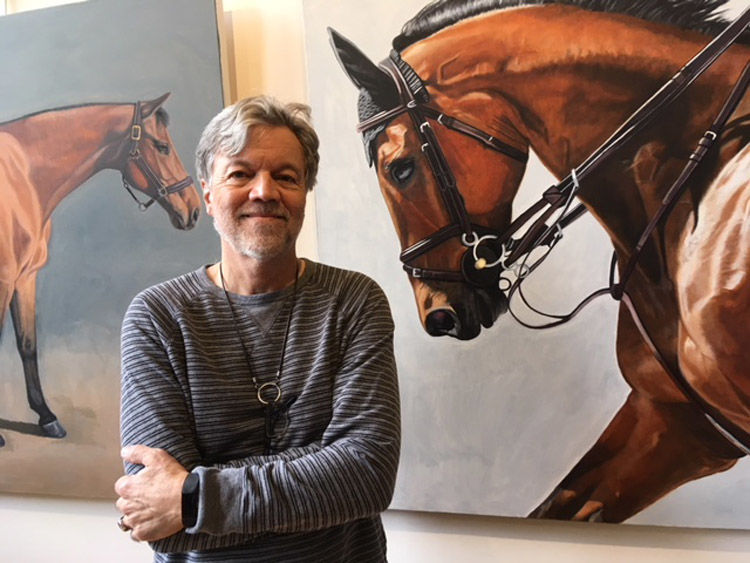 I’ve watched Jan Lukens stick to his goals for years despite the many twists and turns his career has taken. We were studying commercial art and advertising design in 1978 when he took a job as an art director for an ad agency. In 1980, after working for a few agencies, he began freelancing as a graphic designer and then as an illustrator until 1992 when he left advertising after feeling burned out.

Lukens had an idea that people who owned horses would be interested in paintings of their horses. He called a dressage trainer who referred him to Parker Minshin, who not only invited him to her stables but also helped him select, groom and pose horses for his reference photography. “That was my first break, back in 1992,” Lukens said. “I did several spec paintings, framed them, printed up business cards and became a horse show vendor.”

Yet, he left his first two shows in Blowing Rock and Asheville with no commissions.

When Lukens visited his friend, Pattie Harris Boden, an art director who rode hunters (a type of horse in competitive horseback riding), she noted that few horse painters could paint people as well as he did and suggested he paint a girl with a horse. Minshin was happy to have him paint her 12-year-old daughter, Jennifer, with her hunter. This painting landed him three commissions at a Raleigh horse show and a new client, Joanne Boyd.

Lukens recalled the day he photographed Boyd with her horse, “she liked my work and said if I came to Birmingham, Alabama, she’d throw a cocktail party and invite her equestrian friends.” Three months later, Lukens left that party with 13 portrait commissions.

“That’s when I realized I could make a career out of this,” he said. “I owe my success in equestrian portraiture to a handful of generous, influential people who just wanted to help me succeed. Parker and Joanne were the first.” He added, “I enjoyed the equestrian community, painting portraits, and being outside with the horses. My new career really suited me.”

In 1999, he realized a 20-year dream to acquire classical art training when he moved to Old Lyme, Connecticut, to study at Lyme Academy College of Fine Arts. After two years of full-time study, he moved to New York to study at the National Academy of Design.

“I took the train into the city, moved into my apartment and attended my first class,” Lukens recounted. “The next day was Sept. 11, 2001. We watched from my building roof in horror as the towers burned. It took me 20 years to get to New York, and I felt if I didn’t go to class, the terrorists would win. Out of 30 students and an instructor, only one other student and the model showed up. We drew in silence. I spent the next day in Central and Riverside Parks, where I found crowds of grieving people seeking community. Despite the incredibly difficult start to my time in New York, the two years I lived there were the most influential of my career.”

Lukens had his most successful show ever in March 2008. He moved back to Greensboro that May to help his sister with his aging parents. Lukens shared that after 16 successful years in equestrian portraiture and staying booked for six months in advance, he received his last commission in June. He started 2009 with no business lined up due to an oppressive recession. He struggled to resurrect his equine portraiture business but said it was too inconsistent to support him.

In 2011, Lukens made a lateral career move with an exhibition of traditional equine paintings and cityscapes at the High Point Furniture Market. His girlfriend, Sallie White, an interior designer and painter loved the exhibition but felt the paintings would be difficult to place in her client’s homes. She suggested that he paint large-scale, tightly cropped canvases of horses in muted tones. Lukens loved the idea and immediately started his “Big Horse” series. His first gallery, Dog & Horse Fine Art Gallery in Charleston, South Carolina, sold his first three paintings within two weeks of delivery. Lukens shared that after 34 years of doing commissioned paintings exclusively, a new career was born.

Today, Lukens has gallery representation in New York, Charleston and Atlanta. He said he supplements his gallery sales with painting commissions from his previous clients and social media followers. He recently received the largest commission of his career, a 60-by-78 inch painting of Revolution Mill, where his studio has been for the past two years.

Where will he go next? “My primary reason for being in Greensboro is my mother, who is 93,” he said. “At some point, I’d love to travel the world for a year, starting with the great cities and art museums of Europe. Having a career as an artist has been a blessing. It’s a lifelong quest to improve and share. I’m happy to be doing the best work of my career.”

TERRY RADER is a writer, poet and songwriter. She is formerly an ad agency pro creative director, branding strategist and Earth Harmony columnist. She’s a storyteller on a mission to promote creative people, grassroots, sustainability and underground happenings in our community while she pet/home sits and writes her personal stories, songs, poems, and nature essays.