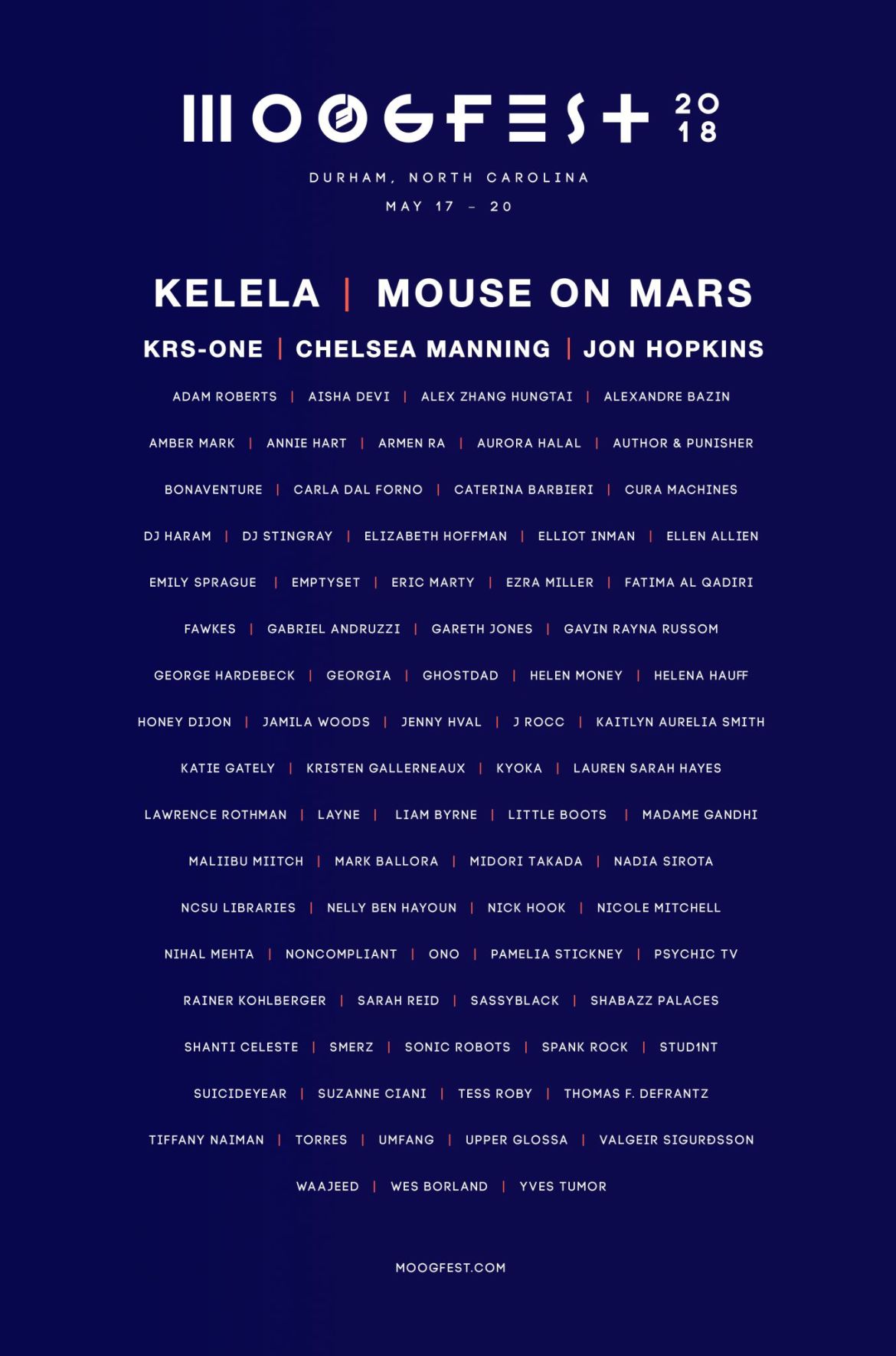 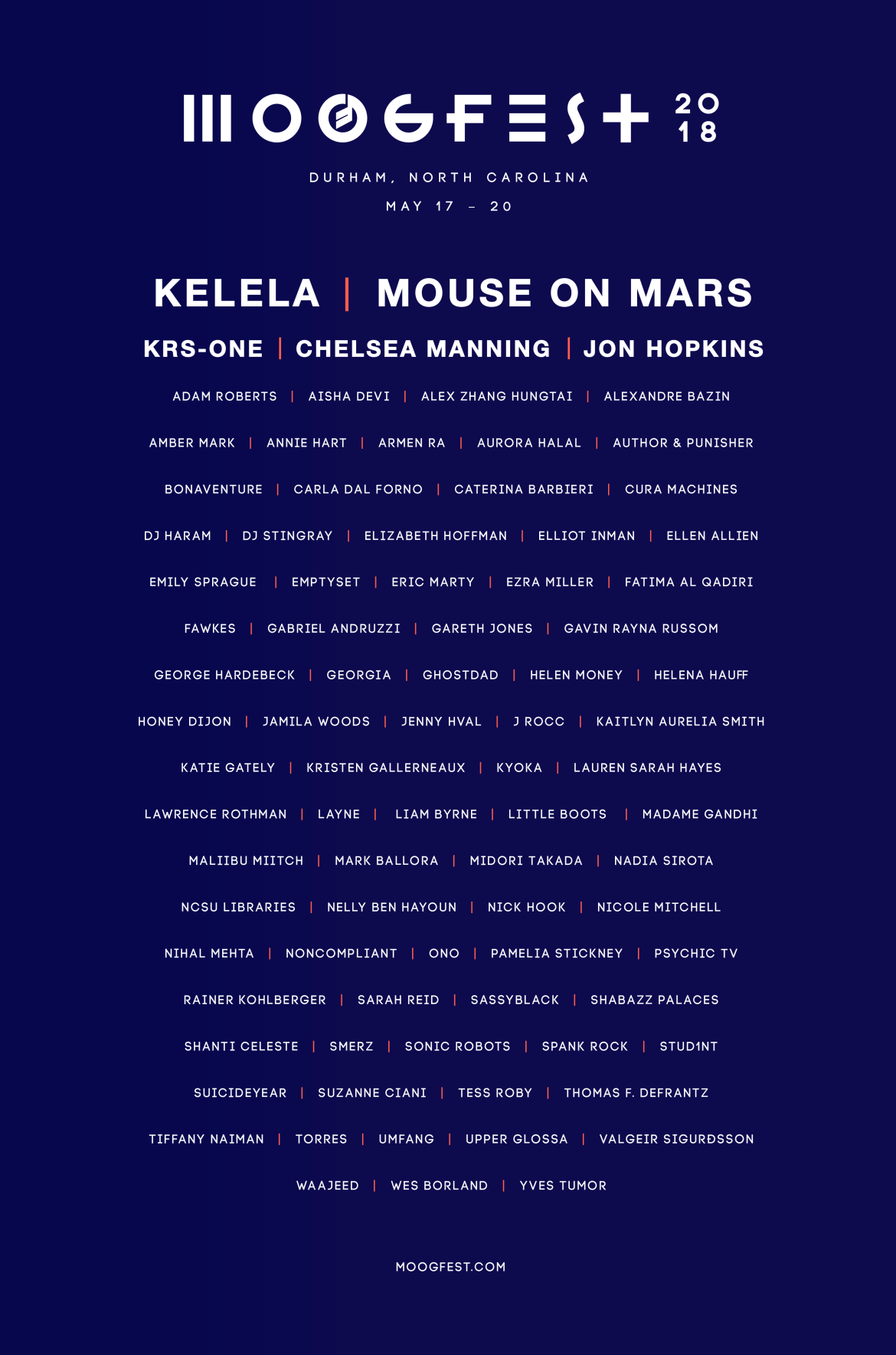 Durham, N.C.– Phase Two of Moogfest’s 2018 programming includes a slate of rare appearances, mind-expanding masterclasses, workshops, and keynotes, plus the debut of A3, a revolutionary 3D audio environment to power exclusive performances from nine artists under the festival’s Spatial Sound banner. Moogfest takes place May 17-20 at various venues throughout Durham.

About A3 (Audio Cubed) and Spatial Sound

Built within the Durham Armory, a large-scale performance venue in downtown Durham, A3 hosts an immersive 360-degree sound system with 24 independent sources, making it the most advanced sonic environment of its size for popular applications. Within the space, performers can articulate sound from every angle, enveloping the listener within an elevated multi-sensory experience. A3 at Moogfest 2018 is made possible through close collaboration with Meyer Sound and Virginia Tech’s Institute for Creativity, Arts, and Technology.

To demonstrate the vast potential within A3, Moogfest has enlisted a diverse array of artists to customize new performances to its capabilities.  These artists have been working with engineers and specialists from Virginia Tech and Meyer Sound, both in-person and remotely, to dovetail their live experiences with this enhanced technical environment.  In addition to previously announced artists Jenny Hval and Aurora Halal, new Spatial Sound additions include Mouse on Mars, who will feature the interactive creations of robotics designer Sonic Robots, with special guest Spank Rock; Suzanne Ciani, who returns with LAYNE to premiere her live score of the 1920 German horror classic, “The Cabinet of Dr. Caligari,” in quadraphonic sound and beyond; Valgeir Sigurðsson, who will perform his 2017 release “Dissonance” alongside Liam Byrne; and Yves Tumor, who will unveil a new audio-visual show with a live visual mix by designer Ezra Miller. Shabazz Palaces, Author & Punisher, and Waajeed round out the artists commissioned for the Spatial Sound program.

Through impulse response measurements and a mathematical convolution operation, Virginia Tech’s engineers have measured the most finite details of the Armory’s acoustic environment to produce a virtual recreation of the venue within The Cube, the university’s massive, four-story data research facility. In advance of their performance, participating artists will work with researchers, both in-person and remotely, to explore the technical limits of the spatial environment.

Moogfest is well known for its array of workshops conducted over the course of the festival by performers, creatives, and pioneering educators. This year, we’re proud to share the following presenters from renowned educational and academic institutions, with more to be announced including Future Thought workshops from the musicians announced today.

Moogfest Engineer pass holders participate in an annual, two-day workshop where they build their own rare and unreleased synthesizers. This year, they’ll be the first to own the Sub-Harmonicon, “a semi-modular harmonic kaleidoscope that divides into itself until everything that is up becomes down,” inspired by the Trautonium, the Rhythmicon, and the Schillinger System.

Last year, participants built the DFAM, which went into full production earlier this year. Engineer Passes are available on an extremely limited basis for $1500 plus fees. General Admission and VIP passes are also available for $229 and $499 respectively, plus fees. Additionally, Moogfest and the Art of Cool Festival will be announcing a special collaboration for 2018. Details to be revealed soon.

Moogfest is the synthesis of music, art and technology. Since 2004, Moogfest has brought together artists, futurist thinkers, inventors, entrepreneurs, designers, engineers, scientists and musicians. By day, Moogfest is a platform for conversation and experimentation. By night, Moogfest presents cutting-edge music in venues throughout the city. This mind-expanding conference attracts creative and technology enthusiasts for four days of participatory programming in Durham, North Carolina. Performing artists include early pioneers in electronic music, alongside pop and avant-garde experimentalists of today.

All ticket types below are available for purchase now HERE.