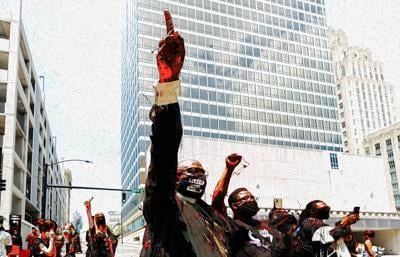 Since the beginning of the year, local creatives conceived, wrote, and rehearsed a one-act multimedia theatrical event about the importance of similarities and differences in humanity that is now coming to the Reynolds Place Theatre at the Milton Rhodes Center for the Arts in mid-June.

“Our Time: A Conversation in Black & White” is a three-person play based on a meeting of individuals, with one Black and another white, forced into conversation by an old hippie. The play, set in Winston-Salem, takes place after a Black Lives Matter rally and Sons of the Confederacy protest of the removal of a Confederate monument.

Lynn Felder, a former, longtime reporter focused on the arts in the area and playwright of “Our Time,” brainstormed ideas for a play during a 24-week virtual class called the Creative Catalyst by Thomas S. Kenan Institute for the Arts at the University of North Carolina School of the Arts.

Her dream? For everyone to love everyone.

“I just believe…under the skin, we are all the same, and that people are people, and there is no reason for us not to embrace one another’s differences,” Felder said.

This is Felder’s first production, although she has seen thousands of plays, reviewed and read hundreds, and taken part in dozens. Before becoming a journalist, Felder was a dancer and actor. For about two decades, she was an editor and journalist at the Winston-Salem Journal.

Felder’s moral compass has remained the same throughout her life. “When you grow up, and you’ve found that you have agency and that you have a voice, then you can do something, so this is the time,” Felder said.

“I don’t want to put it out there that this is political because I’ve tried to be really balanced in it, as balanced as I could possibly be,” she said.

As the play unfolds, the characters reveal different politics, although they find they have a lot in common, including their love for Jesus and their mothers as well as being economically challenged.

“We live in fraught times, and I feel like I have the authority to tell the story, but I didn’t want to put words in my two guys’ mouths, so I interviewed people across the political spectrum,” Felder said about the script.

Felder interviewed local people to make the conversation turned argument more realistic, with four whose beliefs align with the Black character and four with the white. The interviews, all structured with the same questions, helped Felder develop the script.

In addition, she let others read the script, including Nathan Ross Freeman, the co-founder and artistic director of Authoring Action and a local playwright.

As a self-identified “old hippie,” Felder said the character with the same designation “speaks from me” as someone who wants people of opposing viewpoints to talk and as the person defending the press.

According to Felder, the performance is primarily serious, with humorous interludes.

The play incorporates a range of art forms: music, poetry, and photography.

Solomon Caldwell, a 2020 graduate of UNC School of the Arts School of Music, is the music director for the production. Caldwell, a bassist with a background in various genres, teamed up with Felder while taking the course as they were both interested in art that sparks conversation.

Solomon said he and fellow musicians Gabrielle Walden and Alexis Ward would play original, improvised music “in response to what is in the script.”

His favorite part of the show comes when the characters find similarities in each other.

“I think there is a moment at the end, in the script, where they dialogue about each of their mothers, and I think that really brings the humanity back to these two characters,” Caldwell said. “It strips away whatever preconceived labels they put on each other as well as us as the audience.”

Veteran photographer Owens Daniels shared his photos for the production. The images are of the 2019 Sons of the Confederacy protest before the removal of a Confederate monument and 2020 rallies for Black Lives Matter, both in Winston-Salem.

“They happened in different times,” Felder said about the rallies. “I’ve put them together, so I can get these guys together on stage.”

Daniels started his photographic career at the U.S. Army Photographic School of Cartography. He is experienced in capturing photos using different styles and settled on portraiture. Drawn to candidness and social justice work, Daniels created his own style of photojournalism, with his work going towards freelance gigs for publications and exhibitions.

As friends, Felder asked Daniels to showcase his photos for the production. He agreed. Felder said the photos would be incorporated as projections for the audience to see the real-life protests as a backdrop for the conversation.

After “Our Time,” a talk-back session will occur where people can ask a variety of questions about the play’s production or content.

“I hope that the play will spark conversations. That’s what my intention was,” Felder said. “I am also prepared to ask them the questions that I asked the people who I interviewed.”

The production came together through a network of creatives looking for each other’s help. She added it has been a “very collaborative and dynamic process.”

Allison Lee Isley is the project photo-documentarian and Wiley Hausam, UNCSA, is a production consultant.

A call was put out for auditions. Felder said they received a “nice turnout and got people who we think are really good.” The actors include Garry Wadell as Linc White, Brian Payne as Lance Black, and Abby Catoe as the old hippie.

“It’s been a joy to work with everybody…you go to rehearsal and make revisions in the script, and it’s just a rush every night,” Felder said about developing the performance.

While it is hard for many productions to pay creatives for their work, Felder said everyone directly involved with the production is paid.

“I’m proud of that because people ask artists to do things for free all the time, so I’m happy that thanks to the Arts Council, we are able to pay everybody who is directly involved,” Felder said.

As Caldwell notes, it is a “fulfilling” experience for him to do his work while getting paid.

The various creatives hope audience members take something away from watching the performance.

Felder said she hopes the play “moves the American conversation forward, even if it’s incrementally, to keep the slow arc of the moral universe bending toward justice and understanding.”

For Caldwell, he wants people to take away a deeper sense of community.

As for Daniels, he wants people to question how the rallies impacted them. “I want people to take away a snapshot of where they were and what they felt and ask themselves the question, who was I then, and am I the same person now?”

Tickets for the production are free, with online registration required. Visit www.intothearts.org to register. Donations will be accepted. The Arts Council of Winston-Salem & Forsyth County will manage the donations.

“Our Time” is supported, in part, by the Emily Hall Tremaine Foundation through the Artists Thrive Initiative.

According to Felder, if they completely sell out, they will add a production.