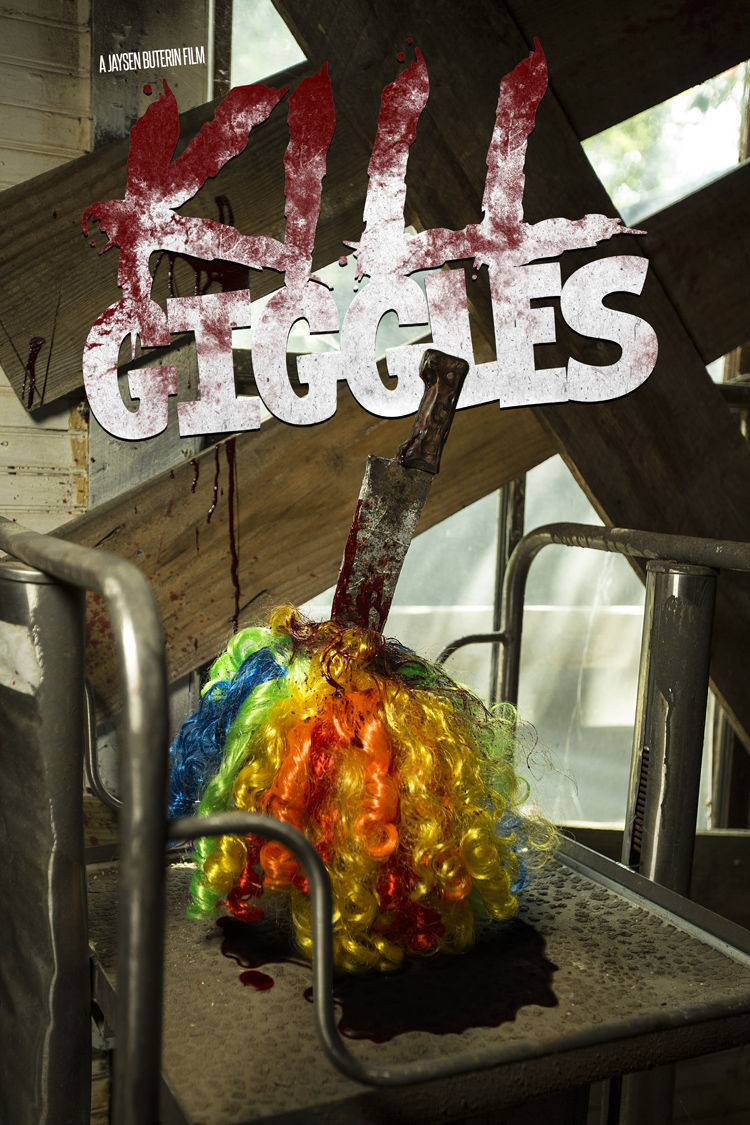 Jaysen Buterin is that rare indie filmmaker carving a niche for himself (a bloody, serrated wound of a niche) by producing genuinely creepy horror flicks that routinely rack up awards at film festivals around the country and overseas.

For his next motion picture, Kill Giggles, Buterin’s production unit CFBB Pictures is employing an unusual funding model, offering an opportunity for regular folks to own a piece of the action.

“We’re selling shares in the film,” Buterin explained. “It’s not a perk-based thing like Indiegogo or Kickstarter where you get a poster and your name in the credits. It’s an actual investment; you own a piece of the film.”

Kill Giggles, in Buterin’s words, “takes a timeless terror trope and turns it on its rainbow wig-covered head.” He’s grown tired of movies where, “the serial killer, the monster, the spreader of mass murder and mayhem dresses up like a clown. The clowns are the victims in this movie.”

It’s not a love for painted-up, floppy-footed freaks that prompted the mad director to turn the tables on a tried-and-true genre. “I’m terrified of clowns. I don’t like them; I kind of wanted to see them suffer. It’s that clown marionette from Poltergeist that really unhinged me at age 6 or 7. I’ve been afraid of them ever since.”

Buterin has been tinkering with this script for about four years.

“About a year and a half ago we spent a weekend shooting a bunch of promo teasers and a proof of concept [Killing Giggles] for the feature, which is essentially the first scene in the film just to give people a visual sense of what we’re going for.” Killing Giggles, a pilot for the feature, garnered numerous film festival nominations and awards for Best Picture, Director, Actor, Makeup FX, and Screenplay.

Meanwhile, the feature-length script for Kill Giggles was awarded Best Unproduced Screenplay at Crimson Screen Horror Film Festival in 2018. “That festival is run by Tommy Faircloth and Robert Zobel; it’s absolutely amazing; they have fantastic horror movie-related guests. The first year I met Felissa Rose from Sleepaway Camp, still one of the best horror movie endings to this day.”

At Crimson Screen alone, the Killing Giggles short earned Best Director and Best Actor accolades. “You have that Sally Fields moment,” Buterin said. “You like me; you really like me!”

A foreshadowing of what’s to come? His track record is solid. Buterin’s previous shorts — Between Hell and a Hard Place, The Corner, and Don’t Let the Light In — brought home dozens of awards at festivals around the country. One, in particular, is a favorite. “Between Hell and a Hard Place is a 25-minute black and white horror film,” he said. “The closest I’ll ever get to doing an original episode of The Twilight Zone.”

They’ve all been picked up by ShortsTV (AMC Networks), “So we have three short films seen in North America, South America, Europe, Asia, Africa; we’re on in five out of seven continents. I don’t think we’re on in Antarctica. I really want to break into that Antarctica market; I wanna be really big there.”

With about three weeks to go, the project has already raised around $13,000, exceeding the minimum goal. The buy-in isn’t enormous, and the potential is almost limitless, Buterin explained.

(Just ask those lucky folks that bought stock in Food Lion back in the 1970s or owned a piece of Seinfeld. And what a conversation starter, when you tell people you’re bankrolling a motion picture.)

“The more investors we get,” Buterin said, “the closer we get to our goal, the better the movie can be and, ideally, the more return on investment they’re going to get.”

Details on how to begin your budding career as a motion picture producer (well, silent partner anyway) can be found at the website. Remember, true horror lurks down the road not taken.

“We’re looking to start filming June 17,” Buterin said. “A three-week shoot, ideally. I had a good location scout meeting last week with Rebecca Clark from the Triad Film Commission. We’re really lucky, we’ve got tremendous folks on both sides of the camera that want to make this happen.”

When Kill Giggles is finally completed, it may go a long way toward conquering what Buterin calls his, “crippling coulrophobia. I’ve literally got a box filled with composition books full of clown deaths.”

Who’ll be laughing then?

A regular contributor to O.Henry magazine, Billy Ingram is the author of five books including Hamburger², a book (mostly) about Greensboro.