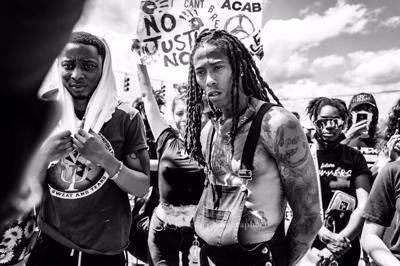 “We have no choice but to do this,” said Anthony, the 27-year-old African-American man who organized and led the multiracial march by over 1,000 demonstrators that began in downtown Greensboro at noon on Saturday and shut down sections of I-40 before ending that evening.

“Our fathers marched. Their fathers marched. We’re tired of marching. It’s sad that we have to continually do this and beg the media to stand by us. We shouldn’t have to. The police should be laying down their arms and protesting with us.”

The march, like so many protests across the nation, was a reaction to the murder of George Floyd by the now-former Minneapolis Police Officer Derek Chauvin. Anthony, who also goes by AJ and Freedopemajor, said he’d been arguing with his brother when I called him Monday night.

“We as a people are frustrated and conflicted right now. My brother and I were going at it about how we can get real effective change. I just told him that this is what it takes, showing the media that we can be peacefully protesting. Coming together in front of America and working with the authorities is the only way we get real change.”

Besides expressing grief and outrage over the death of George Floyd and other black people killed by police, Anthony denounced the presence of armed white militia members and supporters in downtown Greensboro this weekend.

“The hardest part about this is that I’m having to fight against my own people to get them to come together and put their families at risk, because you have Neo-Nazi white supremacists driving around, fully loaded, coming from different cities and posting on Facebook about how they want to shoot us.”

Anthony said that African-Americans are still living in fear, just as they have been for hundreds of years.

“Now, more than ever, we need our voices to be heard. We need reporters like you to tell the real narrative. We are not destroying our city! I led a protest for 10 hours, with no violence, no arrests, no vandalism. So, how do I leave at 10:30 p.m., 10 minutes after the protest ended, and all Hell breaks loose?”

Anthony said after his protest ended at 10 p.m., he received a call from GPD sergeant Eric Goodykoontz. “I like to call him Sgt. Goody because he’s a good man. Sgt. Goody said he had to leave the bridge where we’d been marching because all Hell was breaking loose downtown.”

He said he understood how the anger drove some of the actions that night, referring to the incident where the unidentified driver of an SUV barreled through protesters, after which the crowd’s mood changed.

“What would you do if you’re in a crowd and somebody drives through it? People who do something like that are literally inciting violence. They literally want to go to war. That’s why they’re so overly-prepared. They want a race war. They’re eager to come into the streets and shoot it out with us. We can’t afford that. That’s why we need our voices to truly be heard. And honestly, we just want what we’re owed.”

He then talked about the 1921 Tulsa Massacre, in which white supremacists, attacking both on the ground and bombing from private aircraft, destroyed 35 blocks of what was then the most prosperous black business community in the United States.

“When Black Wall Street was burned down and blown up, the estimate on the insurance that was never claimed was $2.7 million. In 1921, $2 million was equivalent to $20 million today. That money was never paid out to these people. They have burned down our history. They have stolen it from us.”

He also talked about the Wilmington Massacre of 1898, which restored white supremacy both to the city once nicknamed the Black Charleston and throughout the South.

“Rich White men had a coup dAétat and kicked us out, overthrew our government, and you look at the ripple effect of that. Wilmington never saw another black official for 90 years and went from a majority black population to less than 13%.”

“People don’t know the White Declaration of Independence,” Anthony said. That was the proclamation issued by white supremacists just prior to the Wilmington Massacre, which called for the end of voting rights for blacks, something, which for all intents and purposes, then happened in North Carolina and throughout the South until after World War II.

“People don’t even know that’s a real thing. This is the world that we’re living in. These people did not want and do not want black men like myself in positions of power. This is what they despise.”

He mentioned the Facebook post made Monday afternoon by a Facebook account purporting to represent Jason W. Passmore, challenging protesters to meet on Elm Street at 8:05 p.m., which Anthony called a transparent attempt to goad black people to come downtown and get arrested for breaking the curfew.

“This shit is sick, and the worst part is that our president is allowing it to happen. Forget the curfew; we have terrorists in our city. He wants us to show so we can be run over, so we can get arrested. And what happens after that? You bring martial law, you bring these military forces in, and now you can’t peacefully protest, now we can get our real point across, now we can’t build a relationship with authorities. Now, everything our ancestors have worked for is in vain.”

He also spoke about the case of Marcus Deon Smith, the African-American man fatally hogtied by eight members of the Greensboro police during the 2018 North Carolina Folk Festival. “Why do we never hear about that on national news or even statewide news? Do they think it’s too common to bother covering? That shows you something. We are getting killed by authority every day.”

Anthony said that his activism alarms his family.

“My mother is crying over me. My grandmother is shaking scared because she’s afraid white supremacists are going to kill me at a peaceful protest. My brother is sitting right here in front of me, trying to get us to go at it a different angle because he fears where this is going. Why should I have to fear for my life because I’m trying to lead my people to liberation? This is legit crazy.”

He called upon prominent supposed allies to give more than lip service to the protests.

“I just want people to realize that, in order to effect real change, we have to band together more than ever right now. It might not seem like it’s working, but that’s exactly what the enemy wants to do—fool and trick you. But our efforts really are working, and we need to press forward.”