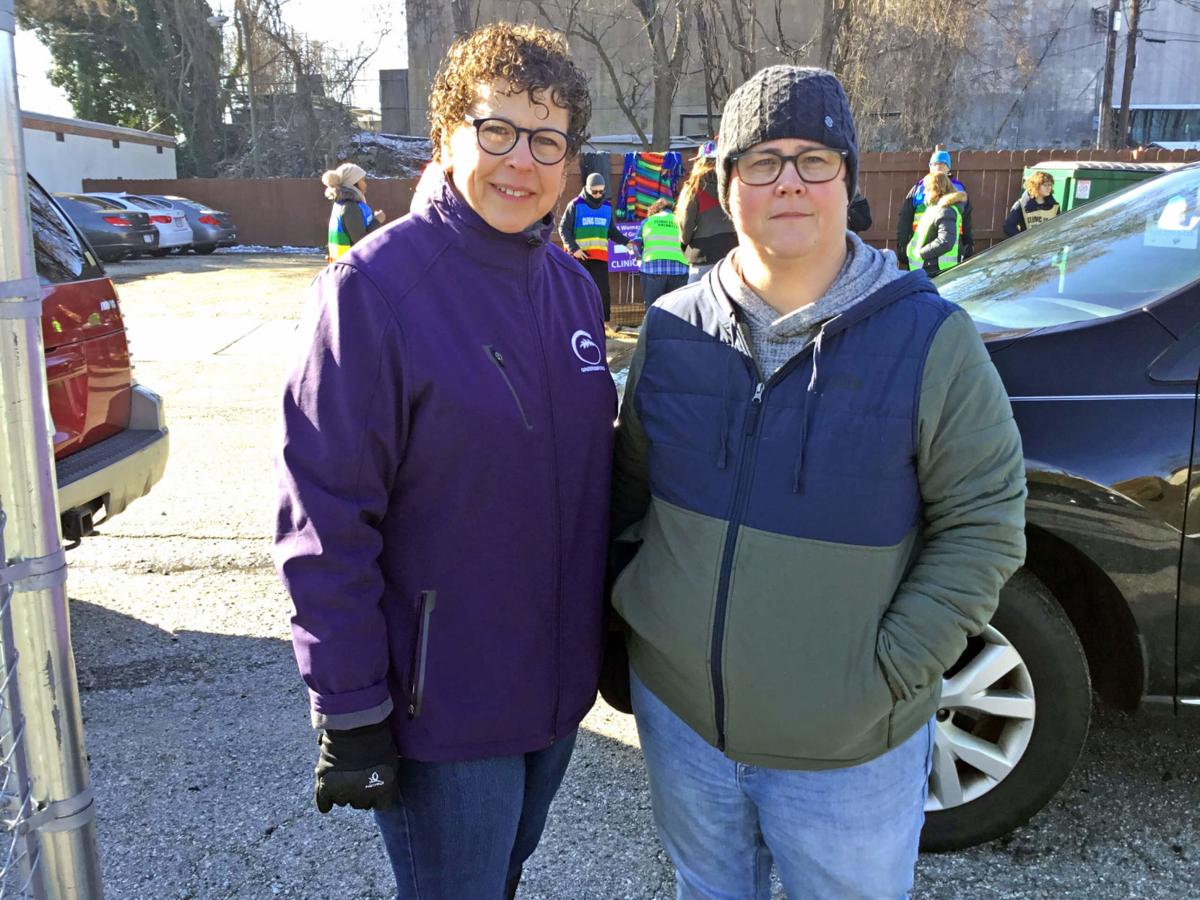 *Editor’s note: A clinic volunteer mistakenly told our reporter that the clinic is open seven days a week. It only sees patients five days a week and is closed on Sundays.

“This stops right now,” said the Greensboro City Council’s At-Large Representative Michelle Kennedy when a white abortion protester shoved her arm through the window of a car containing a weeping black woman.

Several Greensboro Police Department officers watched without interfering until Kennedy caught the attention of their sergeant, at which point, the blonde woman in the pink vest was ordered to step away from the vehicle to which she had been literally clinging.

“If that had been a black man experiencing homelessness, the GPD would have had him facedown and handcuffed in seconds,” said clinic volunteer Kirstin Cassell.

Instead, the protester was allowed to continue trying to divert cars entering A Woman’s Choice, Greensboro’s only remaining abortion provider. Cassell is a patient escort at A Woman’s Choice, which is accessed via a service drive beside Midori Express on Randleman Road. When the incident occurred on Saturday morning, Cassell was showing Greensboro City Council members Kennedy and District 5 Representative Tammi Thurm how protesters attempt to divert patient cars into the restaurant’s parking lot. At last week’s council meeting, Kennedy and Thurm announced they would investigate claims of demonstrators illegally impeding access to the clinic. As previously reported, those allegations were made by three former clinic volunteers speaking to Greensboro’s new police chief at a public forum.

At the protests, pink vests are worn by volunteers and staff from the Greensboro Pregnancy Care Center on Fulton Street. Although it bills itself as a “free clinic,” Greensboro Pregnancy Care is actually a Crisis Pregnancy Center. According to the American Medical Association Journal of Ethics, CPCs are faith-based organizations that, under the guise of reproductive counseling, seek to prevent women from having abortions.

“We used to wear pink vests,” said Cassell, who, like the other clinic escorts, was wearing a rainbow one. “Then, protesters adopted them to confuse patients into entering the Midori parking lot, where they can legally approach them.”

She said this is what happened with the car the pink-vested protester clung to and thrust her arm inside.

“Maybe the officers did not immediately respond because this was on Midori property, and not in the service road they’d been told to keep protesters out of,” said another patient escort, who asked not to be identified.

The space behind the restaurant overlooks the clinic’s parking lots and is the only area from which a large crowd of protesters can see and yell at patients exiting their cars. Each morning’s protest ends when Midori opens for business, at which point the protesters typically eat at the restaurant.

The clinic is open five mornings a week, and on many days, there are only a few protesters. But every Saturday, there are dozens, and sometimes hundreds. Last Saturday, there were between 80 and 100, although both clinic staff and police anticipated several times that number.

This was because Feb. 22 marked the first Saturday of the “40 Week Journey of Hope” campaign announced by the Charlotte-based organization Love Life, which on every Saturday through November will be holding prayer marches at abortion clinics in Greensboro, Charlotte, Raleigh and New York City.

Approximately 600 such marchers came to the Midori parking lot on Nov. 16, 2019. On that occasion, they had a permit, and the GPD closed one lane of Randleman between Meadowview and Midori for them to walk in.

This time there was no permit and no closed lane, but the marchers came anyway, albeit in fewer numbers, walking on the sidewalk rather than in the road. Sec. 26-249 of the Greensboro Code of Ordinances states that demonstrations are exempt from the city’s special event permit requirement provided that “the special events coordinator is notified at least forty-eight (48) hours in advance of the commencement of the demonstration.”

On Friday afternoon, Mayor Nancy Vaughan told YES! Weekly that the special event coordinator had received no such notification. When asked what would happen if these protestors marched without notifying the city, Vaughan said, “That’s an interesting question,” adding that she intended to pursue the matter with the city manager and council.

On Saturday, protesters lining the service road and standing above the clinic’s parking lot shouted that patients could go to www.abortionpillreversal.com to learn how to “reverse the abortion pill and save your baby.” (According to studies cited by the Washington Post, this experimental procedure is considered extremely dangerous.)

After their visit to the protest site, Kennedy and Thurm gave the following statements to YES! Weekly.

“Both the right to protest and the right to health care should be protected in democracy,” Kennedy said. “When protest interferes with a person’s right to health care, it has gone too far. Today I saw women being verbally harassed and, worse, at least one woman was physically harassed while trying to access reproductive care. I will do everything in my power to ensure that women in this community can access care without interference.”

“I was both thankful and alarmed at what I witnessed at A Woman’s Choice this morning,” Thurm said. “Thankful for the amazing men and women that volunteer to serve as escorts to shield patients from the protesters screaming, shouting, and harassing them as they enter the clinic. I was also terribly alarmed at the way the patients were aggressively pursued and misled by the protestors passing out misinformation, intentionally attempting to misroute vehicles, and actually inserting themselves through the windows of vehicles attempting to make their way to the clinic’s parking lot. This was nothing short of aggressive solicitation. We have ordinances against that behavior that we need to enforce. While the protestors have a right to free speech, they do not have a right to interfere with a woman’s right to obtain health care.”

Kennedy and Thurm became aware of the issue after a Jan. 22 public forum with Chief Brian James at the Peeler Recreation Center, where former clinic escort Forrest Hinton described being slammed into a patient’s car by a protester. But every current clinic escort interviewed by YES! Weekly said that they did not believe a greater police presence at the clinic was the solution to the problem.

“The main reason I hesitate to call the police when protesters harass or threaten us,” said a clinic escort who asked to remain anonymous, “is that police presence immediately makes the situation less safe for any black or brown escorts or patients who might be there.”