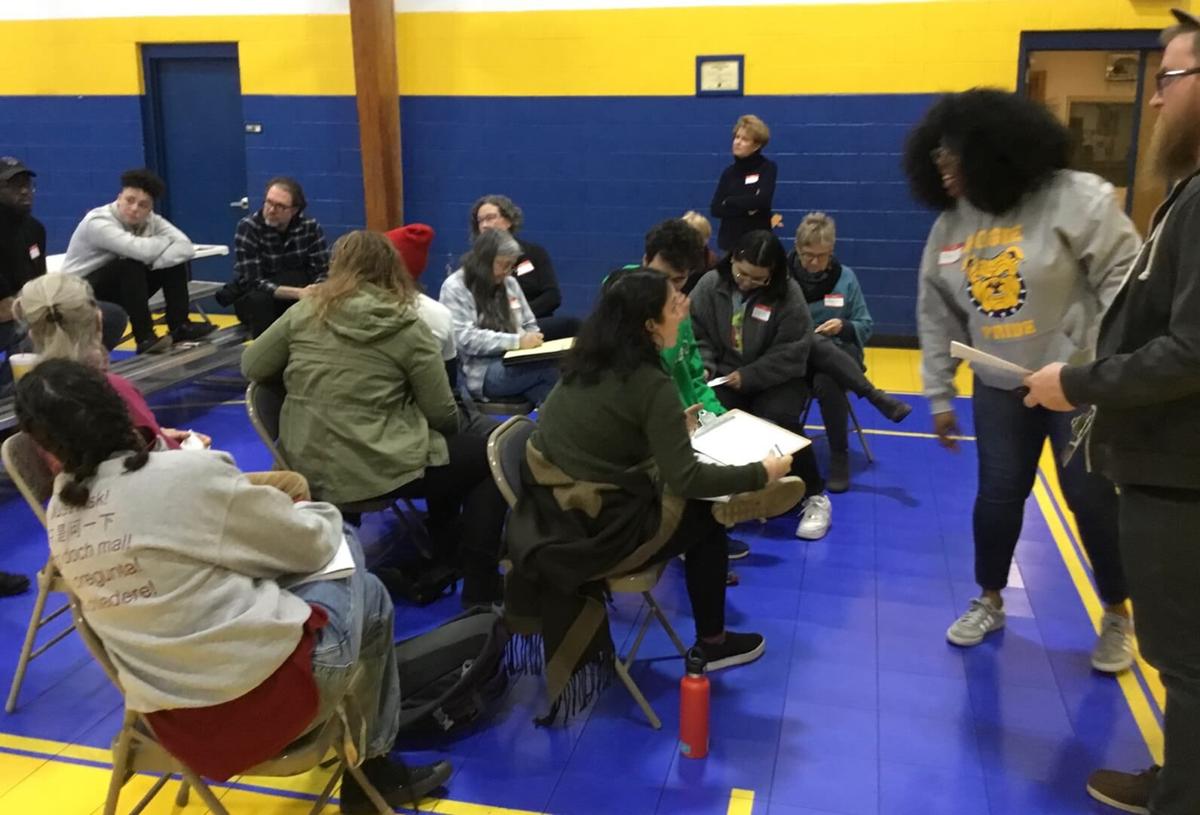 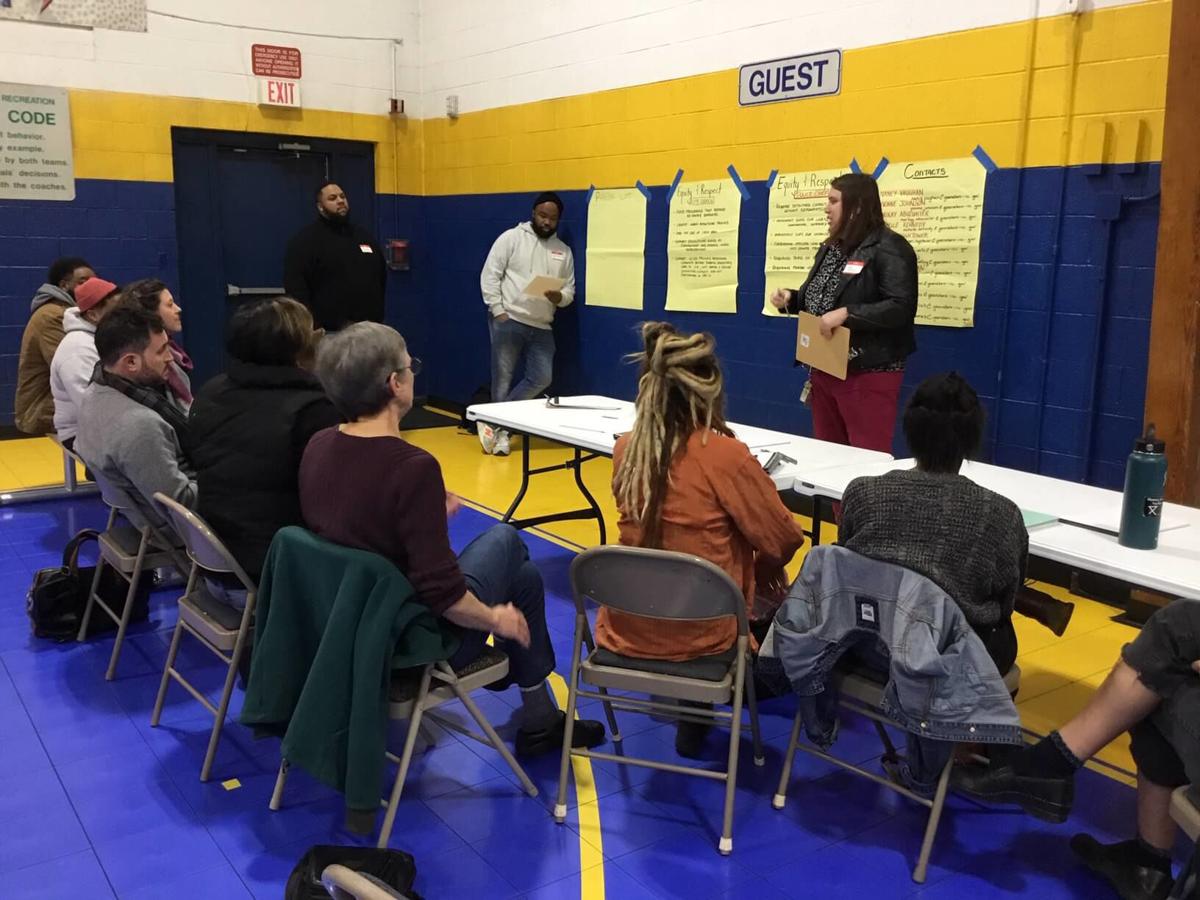 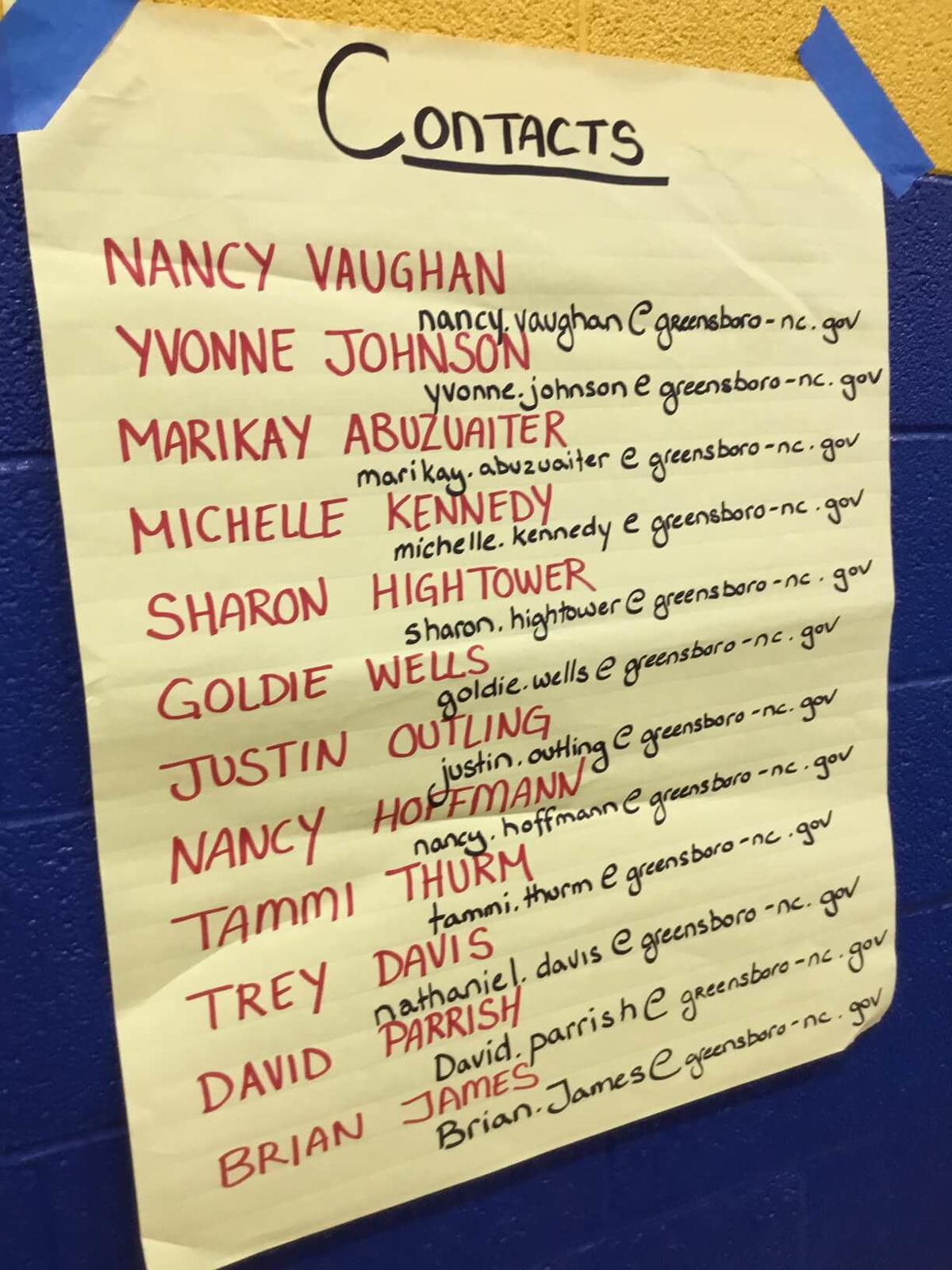 “Citizens of Greensboro, take your anger over my son’s death and use it to your advantage,” said Mary Smith to the crowd gathered in the gym of the Warnersville Recreation Center last Saturday. “Don’t stop. Next year, it could be one of your loved ones that your police kill.”

“We’re not just trying to get help,” said her husband, George Smith. “We’re trying to help others, and keep it from happening to your kids.”

George and Mary Smith are the parents of Marcus Smith, who was fatally hogtied by the Greensboro police officers he asked to take him to the hospital during the 2018 North Carolina Folk Festival. His parents have filed a federal civil rights lawsuit against eight of those officers, the City of Greensboro, two EMTs and Guilford County.

“The 30th of January would have been my son’s 40th birthday,” Mary said. “That’s one day before Greensboro Police Chief Wayne Scott is being allowed to retire.”

Chief Scott has told the press that the section of the GPD directives manual warning about the dangers of the RIPP Hobble restraint used on Marcus Smith “only apply to transporting persons in custody [and] in this case we never got to the point of transporting Mr. Smith.” Activists have accused Scott of making false statements in his introduction to the compilation video of police body camera footage of Smith’s death. Scott has stated that the controversy over Smith’s death was not a factor in his decision to retire.

Mary and George Smith were only two of the speakers at the “Teach-In and Take Action: Safety, Justice and Well-Being for All” forum at the Warnersville Recreation Center. The event was hosted by Casey Merie, Gene Blackmon, Jess St. Louis, Kay Brown and Marcus Hyde, all of whom also spoke and conducted or took part in workshops intended to teach citizens how to best direct concerns to the mayor and city council as well as new Greensboro Police Chief Brian James.

Kay Brown, who serves on the Police Community Review Board, spoke on the issue of marijuana deprioritization, stating that the police chief can order his officers’ to not arrest people for marijuana possession. Brown pointed out the racial disparity in Greensboro arrests on those charges.

“You are more likely to find marijuana in a white man’s car than a black woman’s, but if you look at the stops and searches in the City of Greensboro, those numbers don’t match. Right now, over 80% of marijuana arrests in Greensboro are of black people. I didn’t say, people of color, I didn’t say Latinx folks, I didn’t say, people of Asian descent, I mean that black African-Americans are over 81% of those arrested, even though they are 41% of the population.”

Brown noted that, in Greensboro, more black women are arrested for marijuana possession than white men, a dynamic she’s never seen anywhere else, and one not supported by statistics on actual marijuana usage. She also addressed the issue of police check-points.

“They never put them downtown, but they sure do pop them down on the east side of town, or a little further out where immigrant communities are. Why are these check-points just in certain communities, and not in downtown Greensboro, which is the most concentrated area of alcohol consumption?”

Both Brown and Hyde of the Homeless Union of Greensboro said that the arrest disparities show the need for the Greensboro police to have a written consent policy, such as required of police in Durham and Fayetteville.

“In Durham,” Brown said, “once the police were required to ask drivers for written consent to search their vehicles, and the forms explained that citizens could not be arrested or harassed for refusing that consent, the racial disparity in searches at traffic stops declined dramatically.”

Brown said this policy could reduce the disparities reported in a 2015 front-page New York Times article on the risks of “driving while black” in Greensboro.

“We have a real opportunity with the new police chief,” Hyde said. “With his promotion, three of the four deputy chief positions are open. He gets to decide what his department looks like. The one deputy chief that’s left, he’s probably going to retire in about a year. That means an entire overhaul of the police department is possible, but it’s on us as a community to make sure that we put pressure there, so the department does change.”

“We want to make sure that the new police chief is interested in being transparent with the community about what’s going on. You also have the importance of hosting accountability town halls and having the police department come to us as a community with what they are doing and how disparities in the community are looking. I don’t want to have to go to coffee with a cop in the middle of a workday to be able to find out what’s going on in my community.”

Merie also spoke of the racial disparities in downtown policing cited by “A Safe Place to Stay: Combating Homelessness, Police Violence and Jim Crow in Greensboro,” a study conducted by professors from UNCG and Guilford College, which included a chart naming 10 GPD officers as the ones most accused of misconduct by the downtown homeless population.

Merie stated that transparency and access to data are crucial to correct these disparities.

“If we don’t have data like this, we can’t organize around these things.”

Jess St. Louis spoke of improving GPD treatment of trans, intersex, and gender non-conforming people “in a manner appropriate to their gender identity, which may be different than the sex they were assigned at birth or listed on their government ID.” This, St. Louis said, should include using “the trans, intersex, and gender non-conforming person’s chosen name and pronouns” and “not using slurs or derogatory words to people based on their gender identity.” St. Louis also stated that police searches should “follow departmental procedures based on people’s gender identity, not sex at birth.”

“As Dr. King said, we must learn to live together, or we all will perish as fools.”

She also spoke of Greensboro’s mayor and city council, whose contact information was displayed on signs around the room.

“[Mayor] Nancy Vaughan said she stands behind the police department, even though she knew the RIPP Hobble should never have been used on Marcus and has been discontinued by them. [District 2’s] Goldie Wells said that maybe it was just my son’s time to die. The Smith family says maybe she’s playing God. [At-large representative] Marikay Abuzuaiter said the police had to hogtie Marcus because he had superhuman strength. I’ve never known anybody to have superhuman strength, but Samson.”

Afterward, she gave the following statement to YES! Weekly.

“If the Marcus Smith case was not so huge and didn’t mean anything, then why are these people here? If the GPD did no wrong, why are they implementing a mental health program and coming up with all these new plans if they acted so proper, true and correct the way the mayor said they did back in 2018? And why was the use of the RIPP Hobble abandoned if they committed no wrong in using it on him?”

Mary expressed regret that she will be unable to attend the Community Forum with Greensboro’s New Police Chief scheduled at 6 p.m., Wednesday, Jan. 22, at the Peeler Recreation Center. “But, I hope y’all do and ask that man some of these questions.”