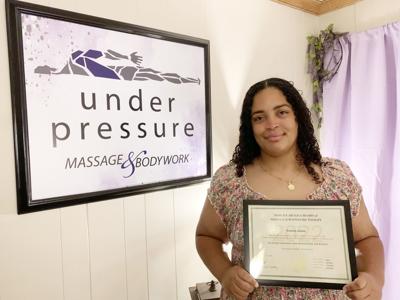 Forget making lemonade out of lemons. Victoria Jones took the pressure of life and turned it into a career. She recently opened her own massage therapy business, Under Pressure Massage & Bodywork, at 101 Gannaway Street in Jamestown. Her mother suggested the name for her business and when Jones heard it, she knew it was the perfect one.

The journey to having her own business has not been easy, but the future looks bright for the 22-year-old.

Jones is the daughter of Lovie and Mohamed Zeko of Jamestown. For years she helped her parents in their food industry. But following high school, Jones enrolled at Lenoir-Rhyne University. She left school after a year to return home when her mother was diagnosed with cancer.

She had attended early college at Guilford Technical Community College and that, combined with her studies at Lenoir-Rhyne, meant she needed only one credit for an associate’s degree. She completed that at GTCC and rejoiced with her family, which includes an older brother and two younger sisters, when her mom’s cancer went into remission in April 2019.

The joy was short-lived however. Three weeks later, Jones learned that she had brain cancer.

“I had noticed my vision decreasing in March and got glasses, “ Jones said. “But my vision continued to decline. When I went to the hospital in May, I was told a mass was strangling my optic nerves and was given two months to live.

“I felt God was with me at that time. Not once did I feel fear.”

Jones noted, however, that it was hard on her whole family to go straight from the diagnoses of her mother’s cancer to hers. Although the mass was inoperable, doctors chose to use radiation to try to shrink it.

“I really appreciate the care I received from Dr. Zachary Vaslow at the Cone Health Cancer Center at Wesley Long,” Jones said, “and from my sister Jayla, who was just 17 at the time, and drove me to all my appointments.”

The radiation did its job and shrunk the mass, but the nerves in her eyes had already been damaged and Jones was left visually impaired.

For her 21th birthday, Lovie treated her daughter to a massage, and then encouraged her to consider that for a career. A research of local schools led Jones to Kneaded Energy in Greensboro, which was co-created by Bill Norman and Shelley Johnson. The company has its own practice as well as a massage school.

“Susan Cales took Mom and me on a tour of the school and I felt so comfortable there,” Jones said. “I felt they would make sure I would be successful.”

The staff did indeed make sure Jones’ visual limitations did not impede her ability to learn. Although challenged, Jones finished her studies in December 2020, having been trained in all types of massage. She passed her boards on the first try and received her state license on April 1, 2021.

“It was one of the proudest days of my life,” Jones said.

“Jamestown is my home,” she said.

Jones works every day by appointment only. She may be reached at 336-553-8380. She also can be found on Facebook at https://www.facebook.com/underpressurebodywork.