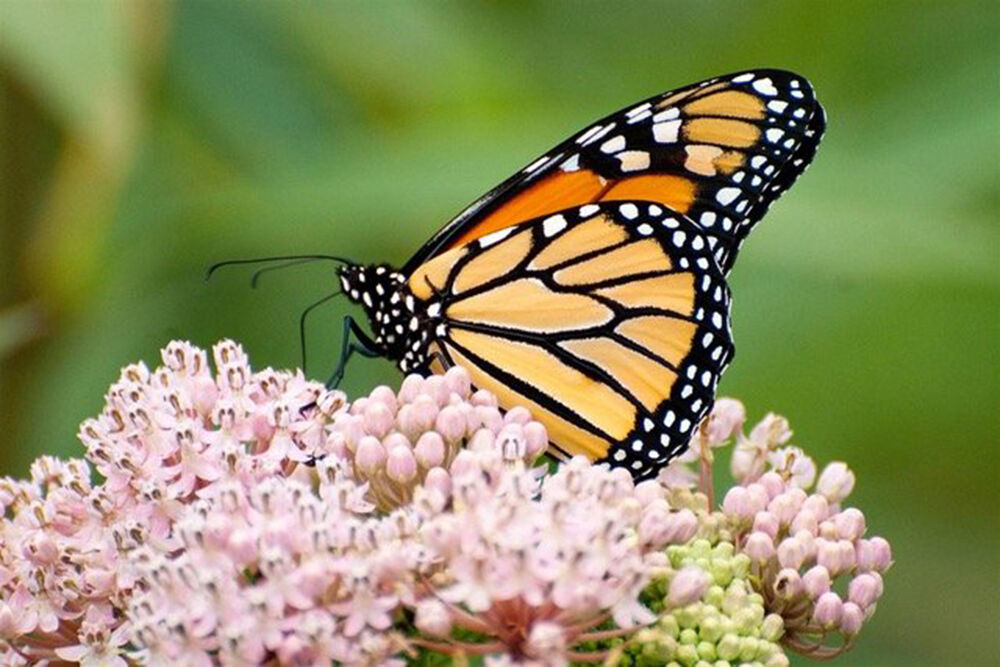 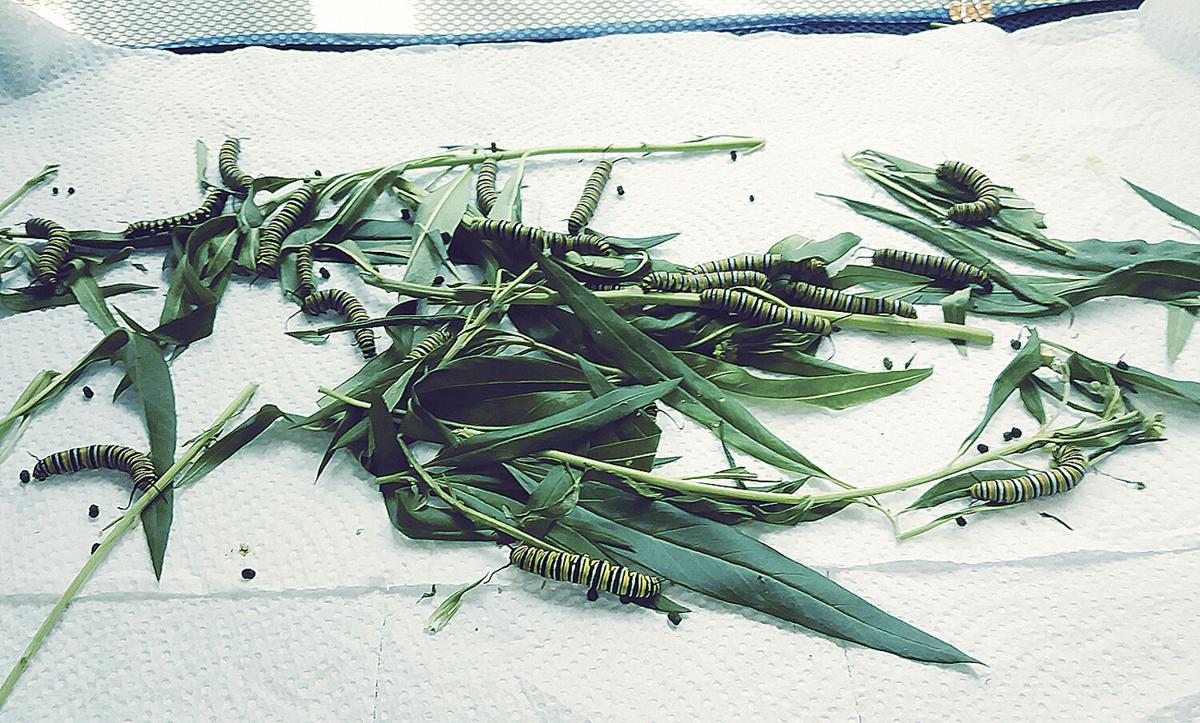 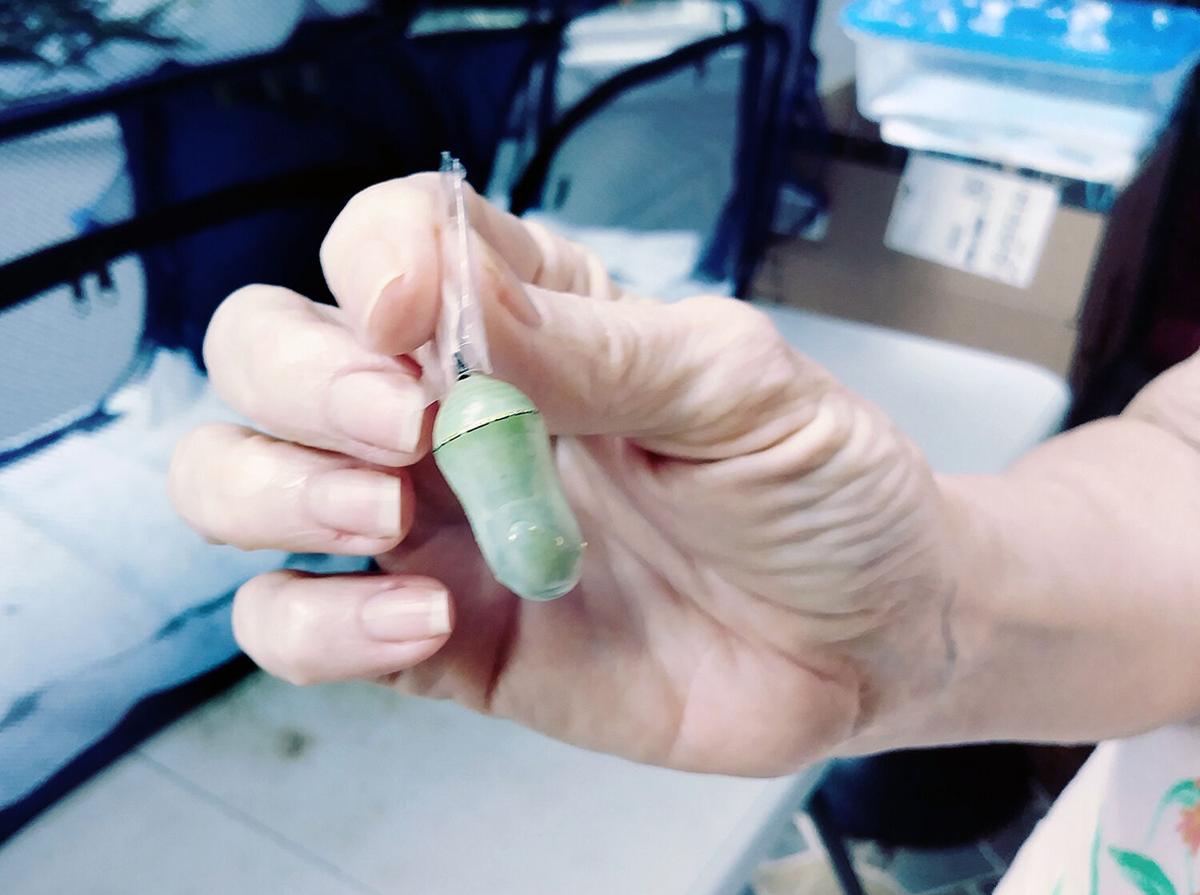 Megel holds a chrysalis in preparation of moving it. 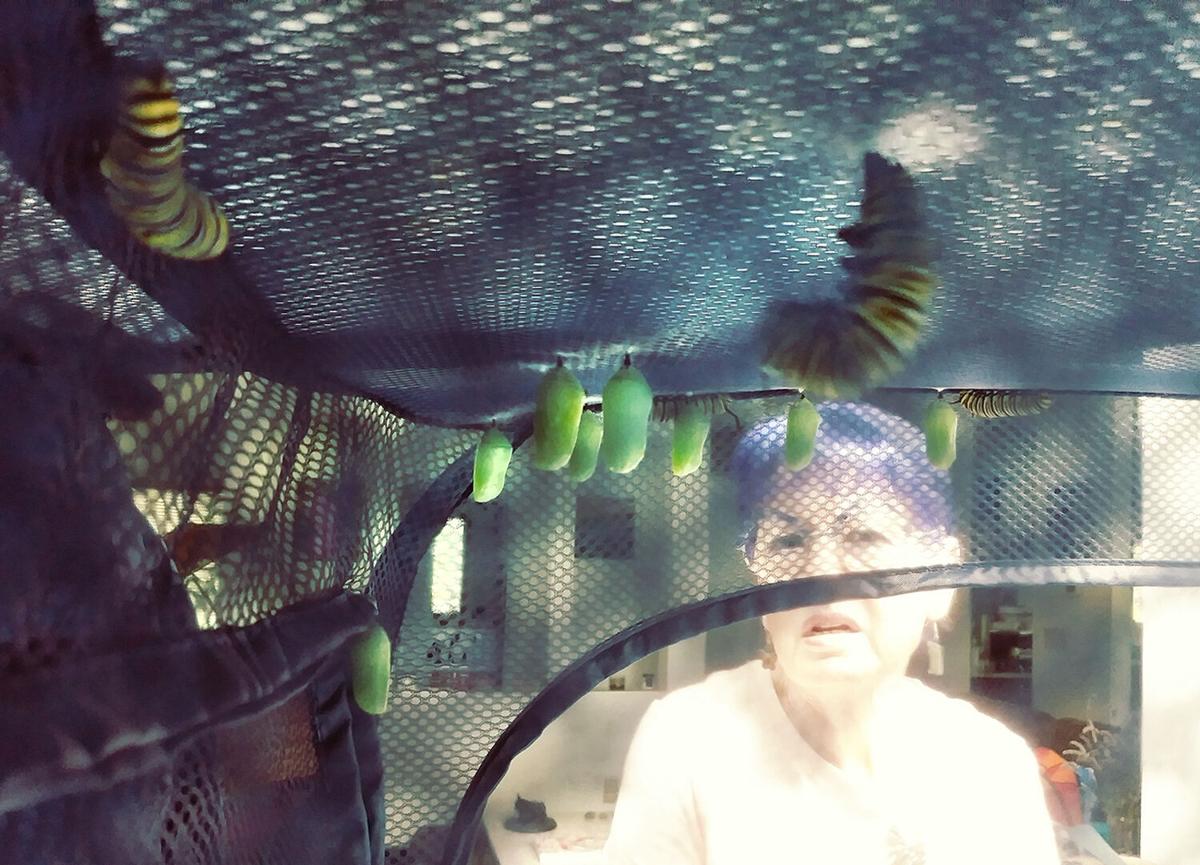 Megel looks at the chrysalis hanging from the top of their condo. One caterpillar is in a “J” shape, ready to shed its striped skin to become a chrysalis. 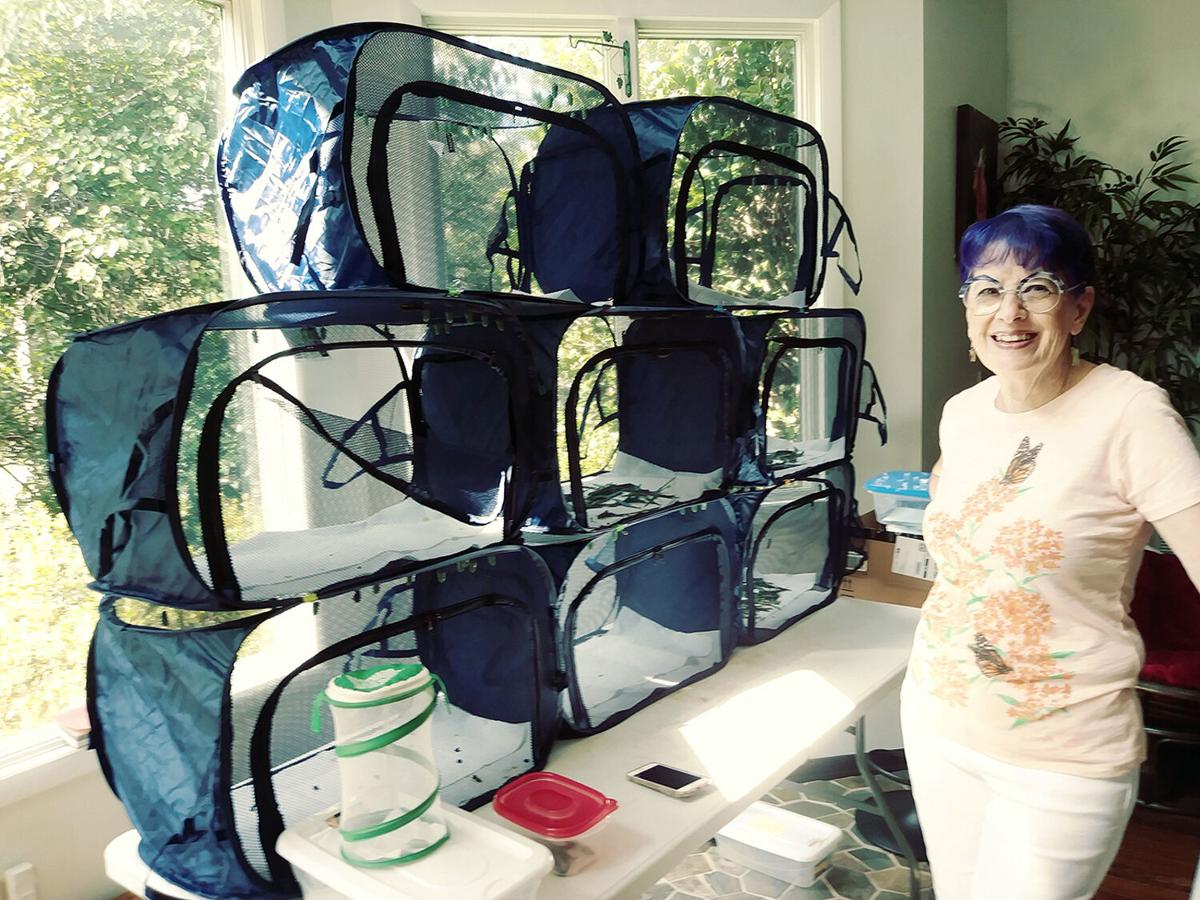 Jeanne Megel and her butterfly “condo." 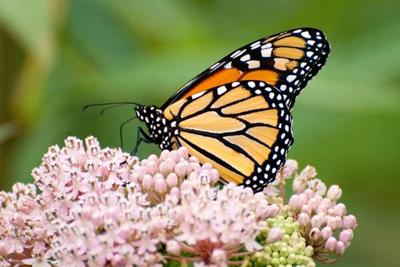 One sight in nature that is certain to bring smiles to even the grumpiest person is a butterfly flitting around, especially if a child or pet is trying to catch it.

From its metamorphosis from the little striped caterpillar to the delicate and beautiful adult, the butterfly has become a metaphor for transformation and hope and a symbol of rebirth.

There are a lot of these little creatures populating Jeanne Megel’s home in Cedarwood. But though some may think of them as pests, to Megel, they are the beginnings of some of the most beautiful beings on earth, monarch butterflies.

Megel is a monarch conservationist and has been raising butterflies seriously for about six years. Her daughter Katie also is a big help in the endeavor.

“A lot of people are starting to raise butterflies in their home now, monarchs specifically,” Megel said. “Populations have dwindled so badly that they would have been red-listed as endangered this last year except there is not enough funding to take care of them on a federal level.”

There are many reasons butterflies are endangered, including pesticides, deforestation, climate change and urbanization, all of which lead to the destruction of the milkweed plant. Females lay their eggs on milkweed and when the eggs hatch, the resulting caterpillars, or larvae, feed on the milkweed leaves. The female can lay over 1,000 eggs in her lifetime.

Megel was attracted to this project from reading how the monarch butterflies are being decimated.

Megel grows milkweed in her yard from seed and regularly checks to see if there are any tiny eggs attached. She will break off the leaf, bring it inside and place it in one of the mesh containers in her front bay window.

“You have to start with a garden that will attract them,” Megel said. “First you have to put in your nectar garden that the adults like to feed on, but they will only lay eggs on milkweed.”

The eggs hatch within two-three days into caterpillars, a form they will keep for about two weeks. During this stage they each will eat from 175-200 milkweed leaves.

After this stage, the cat, as Megel calls it, climbs up to the top of its enclosure and hangs down in a “J” shape for approximately 24 hours before beginning to shed its skin. After about two minutes, the chrysalis, or pupa, emerges, similar to a person unzipping and emerging from a sleeping bag.

As it continues to hang for up to two weeks, the chrysalis will turn from green to transparent and the new butterfly can be seen inside.

The entire process from egg to butterfly lasts from three to six weeks. Four generations can be born in one year, with the first three living only two-to-six weeks. The final generation lives about nine months, dying after it returns to lay eggs.

“Last year I think there were only three weeks we actually saw butters,” Megel said, using an affectionate name for the monarchs. “This year they started early. We actually released some in March. I was lucky I had enough milkweed to feed it.

“This is our second batch this month. We’ve already released 174 in our backyard and I’ve given about 100 away. I counted 157 this morning.”

There are two populations of monarchs in the United States. The final generation of the year east of the Rocky Mountains migrate to Mexico to overwinter and those west of the Rockies migrate to California.

There is some controversy regarding whether monarch butterflies should be raised in captivity or just let nature run its course. Megel is obviously in the first camp but understands both sides of the issue.

“There’s a case to be made either way,” she said. “Look what has happened by letting nature take its course. They diminished by 90 percent over 20 years. And they have diminished a lot more since then. 2020 was the first year the overwintering grounds in California did not see a single monarch. They had thousands of them before.

“Also, people want to raise them by the thousands, they don’t take proper care of them and you have to be very careful about a disease (Ophryocystis elektroscirrha) because if you release a butterfly with OE, it perpetuates the disease. That’s a sticking point.”

Megel thought she had several monarchs with the disease but after tests, the butterflies were fine.

“It’s not like we’re [raising in captivity] in a laboratory and releasing thousands of them.”

She stresses that she is not harming the creatures.

“They get first priority. We don’t go anywhere until I know they have been fed. I get up two hours early in the morning to make sure everybody’s got food and they’re not fighting with each other. Caterpillar fights are ugly.”

Raising butterflies at home is a project families could enjoy. There is very little expense, other than purchasing milkweed and what Megel calls the “condos” in which to raise the creatures.

Celebrity friends who passed away in '21

Throughout this past year, I had the unenviable task of writing a number of columns about ce…