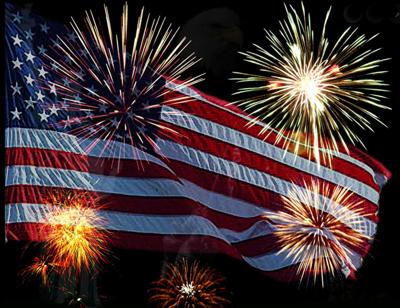 July 4 has long been designated as the birthdate of our nation, the date the United States declared its independence from Great Britain. But it was actually July 2, 1776, when the Second Continental Congress voted on the country's freedom while meeting in Philadelphia. The Declaration of Independence was adopted July 4, however, and that date appears on the document. The first official national celebration was held in Philadelphia July 4, 1777, complete with cannon firing, bell ringing and fireworks.

But if you want to celebrate on July 2 you'll be in good company. None other than John Adams, who would become the second president, refused to do it on July 4 or to appear at any events on that day. He wrote a letter to his wife, Abigail, on July 3 telling her about the declaration and noted, "The second day of July, 1776, will be the most memorable epocha in the history of America. I am apt to believe that it will be celebrated by succeeding generations as the great anniversary festival. It ought to be commemorated as the day of deliverance, by solemn acts of devotion to God Almighty. It ought to be solemnized with pomp and parade, with shows, games, sports, guns, bells, bonfires, and illuminations, from one end of this continent to the other, from this time forward forever more."  Epocha is an old way of saying "memorable date.

In 1776, Adams again wrote to Abigail that American independence should be celebrated with “pomp and Parade … Games, Sports, Guns, Bells, Bonfires and Illuminations from one End of this Continent to the other.” He meant July 2, of course.

Then again, you might want to wait until Aug. 2 to celebrate, the date in 1776 the Declaration was actually signed by many of the participants. The Journals of the Continental Congress for Aug. 1 state: "The declaration of independence being engrossed and compared at the table was signed."

John Hancock's large, flourishing signature has become so well known that we now ask someone to "Put your John Hancock" as a signature. A story goes that Hancock, the first to sign as president of the Second Continental Congress, wanted King George III to be able to read it without his glasses, but actually, Hancock's signature was normally large.

Some copies of the Declaration of Independence include the signature of Mary Katharine Goddard, not one of the official signers. Goddard was asked by Congress to make copies so she took it upon herself to add her name below the original signers.

New Jersey lawyer Richard Stockton signed the declaration, then changed his mind and recanted his desire for independence from Great Britain.

We think of Thomas Jefferson as being the author of the declaration, but it was actually a committee of five that crafted it. It wasn't until the 1790s that Jefferson was recognized as its principal author. Early drafts of the declaration indicate Jefferson denounced slavery, although in 1776 he owned more than 200 slaves.

“We hold these truths to be self-evident, that all men are created equal, that they are endowed, by their Creator, with certain unalienable Rights, that among these are Life, Liberty and the pursuit of Happiness.”

Slavery was in full force in 1776 and many believe enslaved people were included in these words from the declaration. However, many dispute that fact. As originally drafted by Thomas Jefferson, the pursuit was not of happiness, but of “property.” Apparently, Benjamin Franklin talked Jefferson into making the change.

The Philippines gained its independence from control by the United States on July 4, 1946, and the day became a national holiday. In 1962, however, the day was changed to June 12 because of rising Filipino nationalism and resentment toward prior American colonialism. July 4 remains on the books as "Philippine Republic Day," but isn't widely observed.

George Washington, John Jay, Alexander Hamilton and James Madison are typically considered "founding fathers" of this country, yet none of them signed the Declaration of Independence. Washington had an excuse as he was defending New York City in July 1776 as commander of the Continental Army.

Although the 4th of July had been celebrated each year since 1776, it didn’t become a federal holiday until 1870. It became a paid holiday for federal employees in 1941.