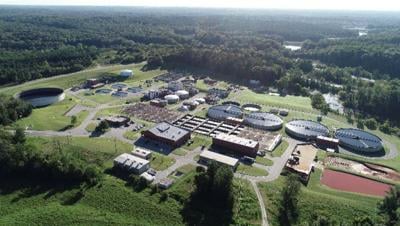 The City of High Point has been fined more than $72,000 by the State of North Carolina Department of Environmental Quality in the past year for violations at its Eastside Wastewater Treatment Plant, one of two such plants in the city.

This is of note to Jamestown and Sedgefield residents because the plant, at 5898 Riverdale Road in Jamestown, treats wastewater from those areas as well as High Point and Archdale..

In January, the city was fined $44,364 after a July 2021 inspection that found 24 violations, 23 of those for readings indicating a drop in pressure from the required level on a wet scrubber machine. The machine removes pollutants from contaminated gas. The agency’s Division of Air Quality later reduced that fine to $22,264.

In July, the City agreed to pay $24,000 civil penalty for operating the plant’s sewage sludge incinerator with an expired air quality permit.

In November, it was fined $4,000 for exceeding carbon monoxide emission limits found in an August inspection.

“When violations are noted, we require the facility to resolve any issues and will use our enforcement tools to address noncompliance,” said Shawn Taylor, a spokesman for the DAQ, in a press release.

The air quality permit expired Nov. 30 of last year but has yet to be renewed. The City should have applied to renew at least six months prior to that November date. In July of this year, the NCDEQ allowed the plant to continue to operate with an expired permit during the renewal process.

Derrick Boone, High Point Assistant Director of Public Services, stated in a letter that the permit renewal was related to personnel changes, staffing shortages and operational impacts from Covid-19.

As of this writing, CHP has paid all fines assessed by the DEQ.

The City of High Point has a history of receiving fines for the Eastside Wastewater Treatment Plant. An internet search uncovered a Greensboro News & Record article from 2003 that stated, “The state has fined the Eastside Wastewater Treatment Plant more money for water-pollution violations than anyone in North Carolina this year.” Thru August of that year the City had been fined $46,000 from DWQ, far less than the 2022 total.

“Most of High Point’s fines came for not removing enough pollution from the sewage before releasing it into Richland Creek, which flows into the Deep River,” the article continued. It added that High Point was fined $9,000 earlier in the year for a leak at the plant that was ignored for several months.

The News & Record conducted an investigation in 2003 and found that between 1998 and 2002, “High Point had spilled about 119 gallons of untreated or partially treated sewage — which can contain used bath water and dishwater, toilet contents and condoms — for every sewer customer.” The investigation noted this “was the second-worst rate among the state’s 10 largest cities.”

Following the fines, improvements were made to the plant.

Improvements are ongoing at the Eastside Wastewater Treatment Plant. According to the Town of Jamestown 2022-23 Capital Improvement Program, nearly $3 million is budgeted for the plant in the Water and Sewer Fund. The Town will pay 7.692 percent of the improvements, which include odor control, ultraviolet system upgrade pre-heat burner, ash decant line replacement and expansion.