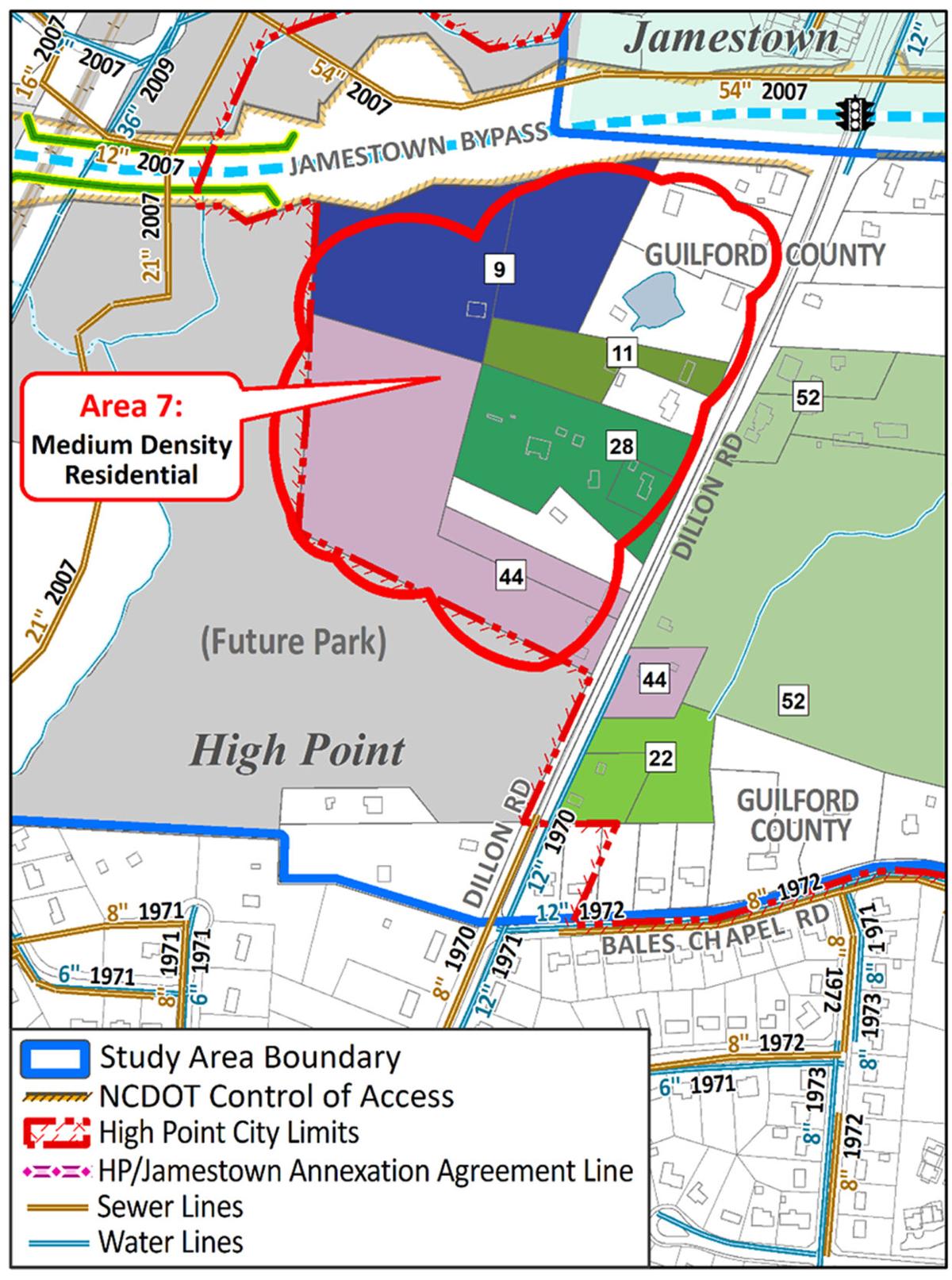 This map show Areas 7 of High Point's Jamestown Bypass Land Use Assessment. Dillon Road is in the middle of the map and Bales Chapel Road is near the bottom. 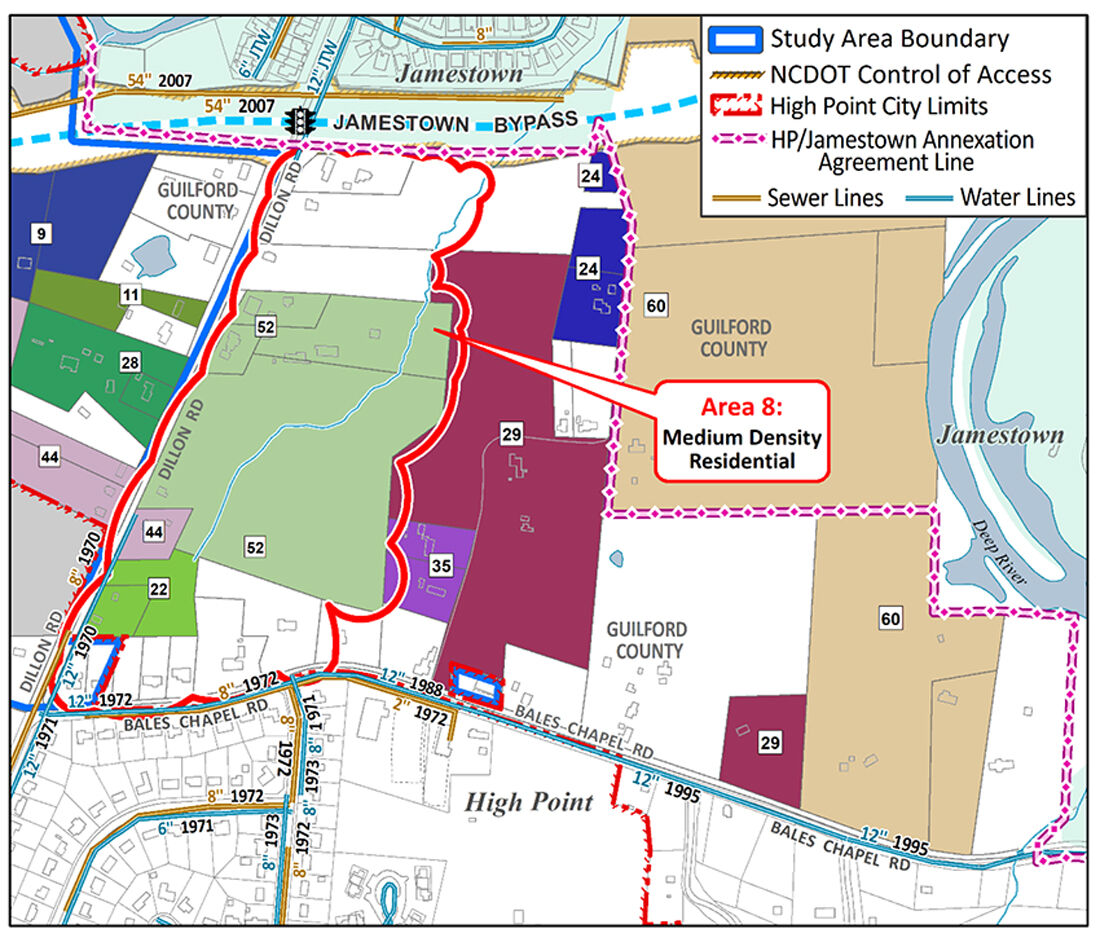 This map shows Area 8. Dillon Road is on the left of the map and Bales Chapel Road is near the bottom. 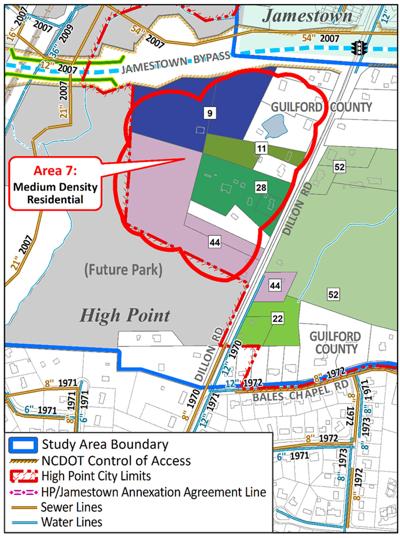 This map show Areas 7 of High Point's Jamestown Bypass Land Use Assessment. Dillon Road is in the middle of the map and Bales Chapel Road is near the bottom.

This map shows Area 8. Dillon Road is on the left of the map and Bales Chapel Road is near the bottom.

High Point City Council unanimously voted 9-0 on May 19 to approve the Jamestown Bypass Land Use proposal.

The Council had few comments on the proposal regarding what the City could do with its portion of the Jamestown Bypass at its meeting on May 17.

The city's Planning and Zoning Commission approved the plan in March.

The review of the document has been a long process, beginning in January.

Only Areas 7 and 8 of High Point's Land Use Assessment, an area of approximately 132 acres along Dillon and Bales Chapel roads, would affect properties near Jamestown. These areas are in the High Point Extraterritorial Jurisdiction near the Jamestown town limits.

Since original plans were presented in January to the P&Z Commission, proposed plans for 82 acres of Area 8 – closest to the Jamestown town limits – were modified, with medium-density residential cut approximately in half and eliminating just over half of the proposed development along Bales Chapel Road. It no longer abuts Jamestown town limits.

The deleted portion was in the Oakdale Reservoir Watershed Critical Area Tier 3. This includes protection of fragile natural watershed areas.

"[This] limited development to two dwelling units per acre and 35 percent built-upon area," said Heidi Galanti, planning administrator for the City of High Point. "Due to these constraints, the area was modified. Area 8 was reduced to approximately 44 acres and 18 parcels. It is now solely in the Oakdale Reservoir General Watershed which allows 75 percent built-upon area."

Area 8 is bordered on the north by the bypass, west by Dillon Road, south by Bales Chapel Road and originally on the east by the High Point/Jamestown Annexation Agreement line.

Since there are no water or sewer connections in these two areas, High Point could not annex until a developer requested it. Annexation would be required for residents to receive these connections.

The "Jamestown Land Use Assessment Document" issued by the City of High Point is available at www.highpointnc.gov/landuseassessments.

The High Point City Council and Planning and Zoning meetings can be viewed at https://www.highpointnc.gov/2270/Attend-Virtual-Public-Meeting.