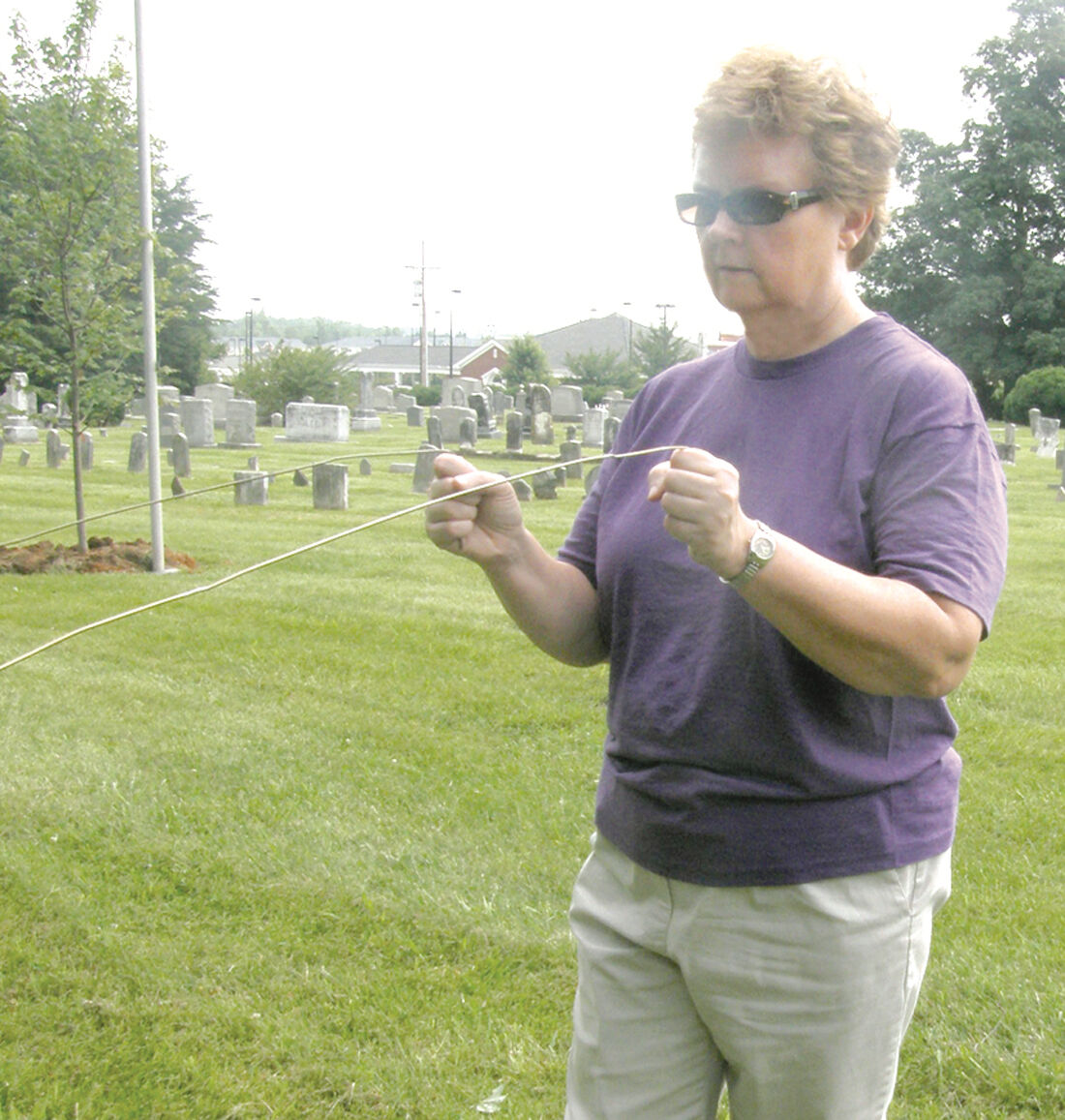 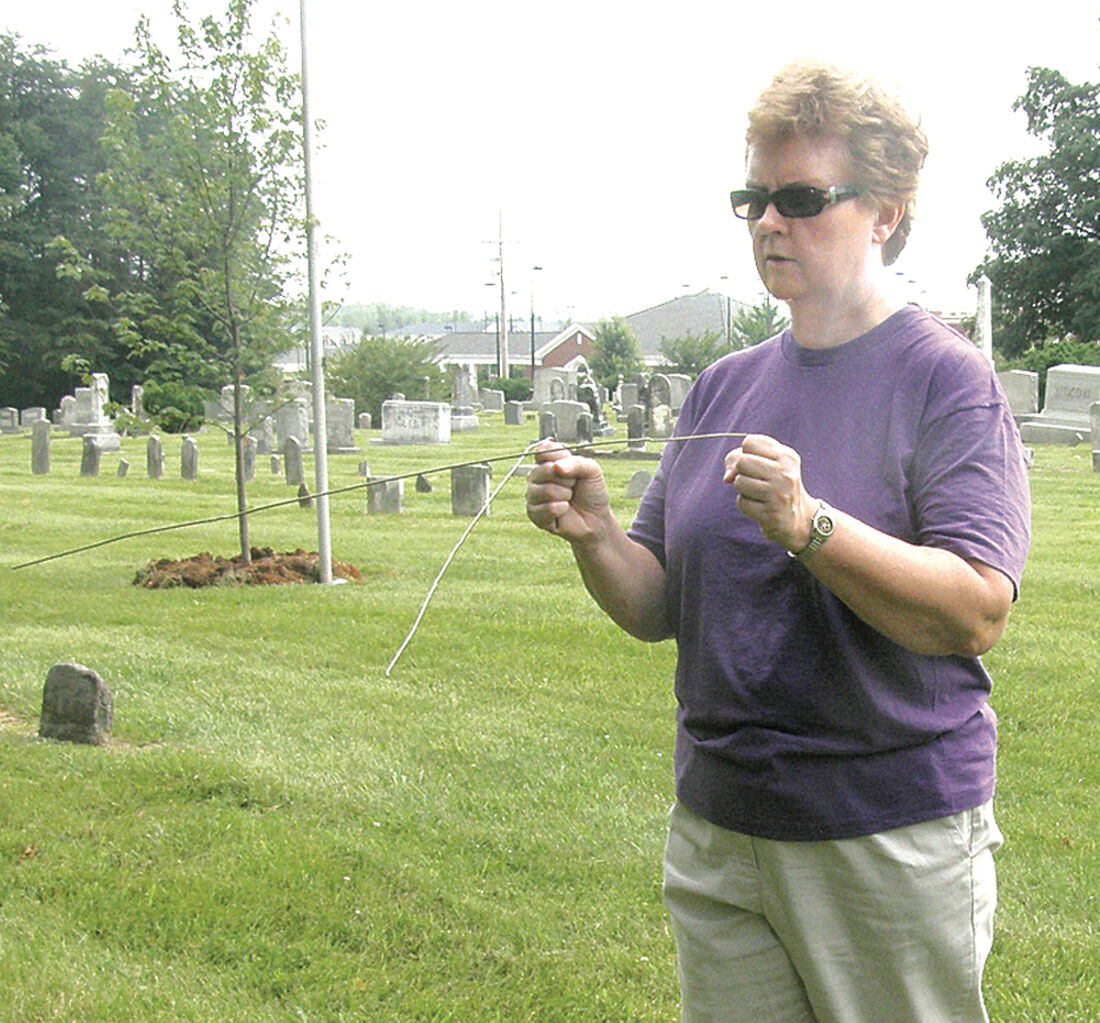 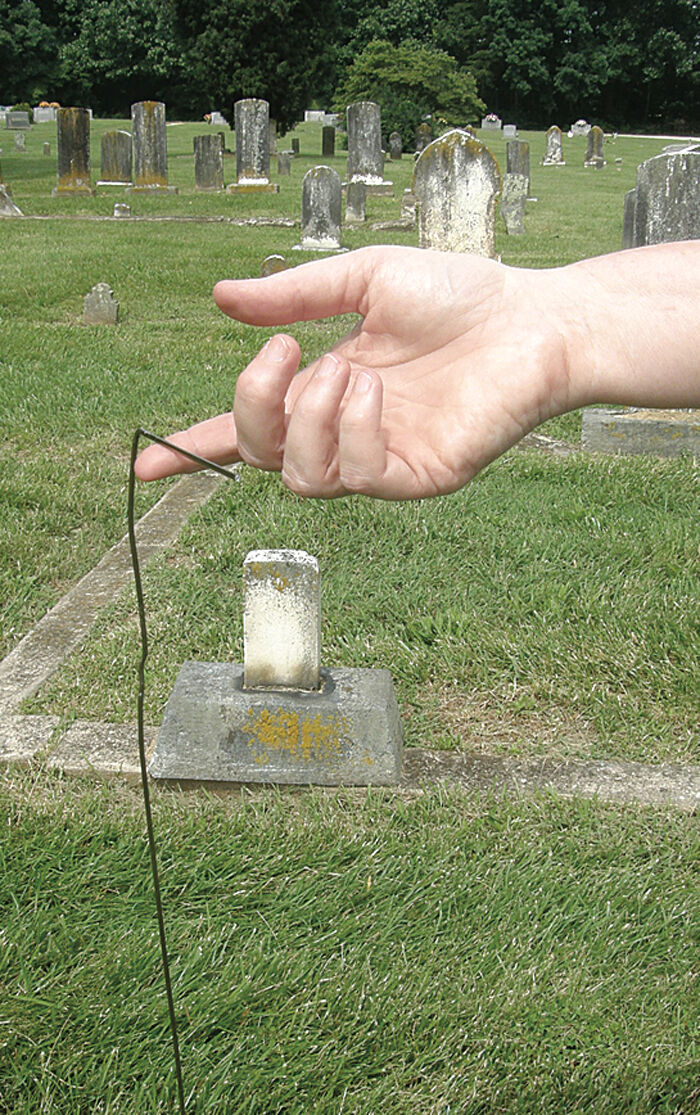 Holding a rod on the end of your index finger over a grave is considered a fool-proof method to determine sex. The rod will rotate clockwise for a male and counterclockwise for a female. 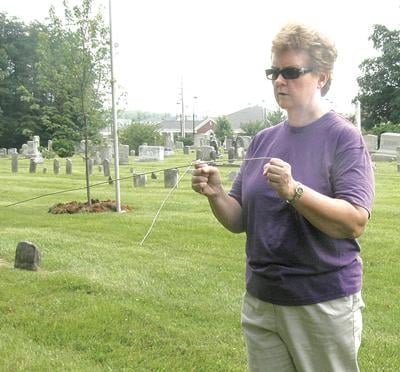 Holding a rod on the end of your index finger over a grave is considered a fool-proof method to determine sex. The rod will rotate clockwise for a male and counterclockwise for a female.

“Straighten two wire coat hangers, bend one end to a right angle as a three-to-four-inch handle, walk over an area where you believe a body is buried, and you can not only find the body but you can determine gender and approximate age,” the prankster will say.

But it really works and is a helpful tool for genealogists searching a known family cemetery.

Dowsing for water or metal – and even bodies – has been practiced for thousands of years. Fans of old TV westerns may remember homesteaders using a forked stick to dowse, the point dipping down when over water. Dowsing is also called divining or witching. Witching for graves using witch hazel twigs dates back to 15th century Germany and many consider it satanic.

These days, genealogists often use these coat hangers formed into "dowsing rods" to find lost graveyards of ancestors or grave sites where markers have disappeared or eroded, and are even able to decide the sex of the body.

The rods will pick up something in the ground. It may be electrical wire, it may be a water line, septic tank, underground stream … or human graveyard.

How does this work?

Some scientists say the rods pick up a disturbance in the earth's magnetic field. Others say they pick up gases from decaying bodies. However, hold the dowsing rods over the body of a living person lying on the floor and the rods will also work.

Another popular theory is dubbed ideomotor action, basically meaning that if you expect to find a body or start paying close attention to your rods, you will unconsciously do something that will produce the result. You might lean forward, causing the rods to tilt downward and cross, even if there is no body.

So, it is believed it is actually the dowser, not the tools, that makes the movements, even subconsciously. Perhaps like using a quija board.

There is a way to determine if it is a human body versus an animal. Humans are usually buried in a Christian manner with the head to the west, feet to the east and on their back. They are usually two-to-three feet apart and laid out in an orderly manner. However, that rule is not followed 100 percent of the time. A municipal cemetery might not be laid out east to west.

Some cemeteries contain areas where the earth has sunk into the ground but often have no marker. These might indicate a grave site.

There are two techniques with the rods to determine the gender of a body.

The first test often gives a false reading but is the most dramatic to watch. Standing over a grave, hold one of the rods loosely over your head, parallel to the ground. The rod will swing around and eventually point to the feet of a male or the head of a female.

Dowsers often consider the second test foolproof. Balance the handle of one of the rods on your forefinger while standing over a grave. The rod will begin circling clockwise for a male and counterclockwise for a female. It is said this technique is 95 percent accurate on graves that were later exhumed.

Approximate age is determined by walking the length of a grave. The rods will stay crossed while over the body, obviously longer for an adult than for a child. Allow one-two steps for an infant, two-three for a toddler, three-four for a child, six for an adult, and seven for a tall adult. Try these techniques on a living person lying on the floor.

If the length of the body is really long, it is probably a horse.

More than one person could be buried in the same grave as the rods might indicate. Sometimes a mother is buried holding a child.

Coat hangers are not the only type of metal that dowsers can use – any type of metal will work. Most are about 3 feet long with a short handle on one end. Cut a drinking straw to about 4 inches and place the handle inside to allow for free motion.

Experts in grave dowsing suggest testing the technique at a cemetery where there are marked graves before venturing out into the woods or fields. Telltale signs that graves are there are depressions in the ground, or mounds, or even wild periwinkle growing over a grave.

Although dowsing for graves is a controversial technique, it does appear to work in most cases. Unfortunately it is not able to produce the name of the person buried in the grave but a surname might be surmised if surrounding sites have grave markers.

The technique works well in small, often neglected, family cemeteries. It is advisable to make a map of any unmarked graves you might find while dowsing, indicating male or female and whether it is a child or adult. But always get permission of landowners before starting your adventure.

Not everyone will get the same results with grave dowsing so it is recommended you practice first on a marked grave, especially to determine gender and approximate age.

Staff members at the Jamestown News had to test the grave dowsing theory. Several years ago, skeptical reporters Carol Brooks and Norma Dennis first went to Deep River Friends Cemetery. They walked among the graves and the rods crossed over known burials. Brooks did not look at the grave markers so she would not be influenced as to the sex. Every reading was correct. The length of the body of a child’s grave also rang true.

Part of this cemetery is known to have many unmarked graves, several of which were found during the test.

Next, the pair went to the cemetery at the old Meeting House at the High Point City Lake Park. Most of the markers in the cemetery are gone, due to vandalism or age, so it was a good place to run the test. Although the entire graveyard was not checked, many graves were found, laid out in an orderly fashion west to east.