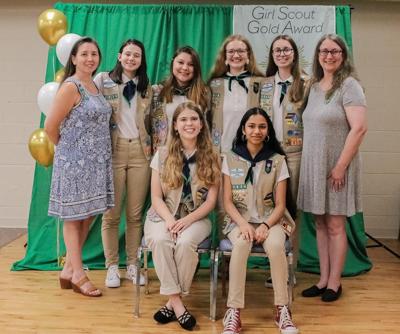 It was a day Paulette Mitchell can look back on with fond memories. On May 29, her daughter Zoe received Girl Scout’s highest honor, the Gold Award. But there is much more to the story. She and Melissa Wolfe, co-leaders of Ambassador Troop #40836, had the privilege of seeing six girls – their entire troop – receive Gold awards.

“These girls have known each other since kindergarten,” Mitchell said. “Our families have been friends. That has been the joy of this.”

All of the girls are graduating seniors. Mitchell and Wolfe had hoped they could finish their Gold projects by the end of their junior years, but the pandemic added a whole layer of difficulty to the task. Some had to complete their projects as seniors, but all persevered to reach their goal.

“Each of these young ladies met the important prerequisites through organizing and implementing a Take Action project during their Cadette years, which earned them the Silver Award,” Mitchell explained. “They also had to complete a Leadership Journey, which then opened the window to begin the Gold Award process.”

The Girl Scout Gold Award is equivalent to the Eagle Award for Boy Scouts. Girls work individually to design and execute a project that solves a specific community need. They must devote a minimum of 80 hours to their projects, usually over a period of one to two years. They connect with experts, community members and other Girl Scouts to bring their projects to fruition.

A special ceremony was held at Jamestown Presbyterian Church to honor the Scouts for their accomplishments. Each Scout was allowed to have seven guests and a photo booth was set up to record the occasion for the families.

Although other end-of-year celebrations had been causal affairs, the leaders wanted this year to be something special. After all, it is not often that an entire troop completes the requirements for Gold. Annually, fewer than 6 percent who begin the journey successfully complete it.

Mitchell has participated in her daughter’s Scout troop since she was a Brownie Scout. She started as troop photographer, but in 2015 when the troop lost its original leaders, she and Wolfe agreed to take over the responsibility. What started as a troop of 12, however, had decreased to six by the time they reached Cadettes.

Mitchell understands the importance of family support for girls reaching for the Gold. During the formal presentation of the awards, she had each mother pin their Scout.

“Each of the mothers had joined Scouts as an adult member of the troop,” Mitchell said. “They provided such a large support system.”

Mitchell used photos she had taken through the years to provide a history of the girls’ Scouting careers.

“It was neat to see all those memories,” she said. “There was hardly a dry eye among the crowd.”

To celebrate the girls’ high school graduation, as well as recognition for earning the Gold, each girl received a photo album depicting their Scouting career and an exploding picture box.

“It was emotional when they opened the gifts,” Mitchell said.

The troop recognized one grandmother who had provided exceptional support with an honorary membership. It also presented Jamestown Presbyterian Church with money to purchase two large engraved pavers that will join others near the main entrance to the church. A time capsule including letters the girls wrote to themselves in 2020 will be buried under them. It will be opened in 2045.

Angela Ferreira, a representative of Service Unit 151 – Southwestern Guilford County, attended the event and announced that Troop #40836 would be officially retired. No other troop will have that number.

“There were lots of good feelings behind the entire evening,” Mitchell said.

Ananya’s desire to focus on the elderly population and their need for spirit-lifting activity and interaction led her to design and coordinate a continuous partnership between the Camden Health and Rehabilitation Center in Greensboro and the youth program of a local church. With the help of her team, she organized game days, movie nights, and special holiday events and celebrations so the residents would have events to look forward to, as well as know they would have regular visitors coming to see them.

Jade researched the beneficial impact of bats on the environment. She developed a presentation to educate others on the importance of bats and their habitats. She partnered with several local farms and families wanting bat houses. With the help of her team, she learned to build the houses and completed seven, which she delivered to the families. Details of the building and updates on the successful homing of bats in and around the community are included on her sustainable Facebook page. The bat house recipients agreed to update posts on the success of the project as time progresses.

Katie spent numerous hours interviewing local experts in the field of science, gathering research and information to write an informative book designed to educate children on the importance of careers in the science field. She had her book published and delivered it to several local elementary schools and after-school programs, where she also conducted presentations to engage children in the joys of science.

Leah worked with a local woodcrafter and Jamestown Presbyterian Church to build a life-sized 11-figure Nativity scene, which would be displayed on the front lawn of the church during the Christmas holiday season. As part of her project, she created an interactive Christmas coloring and activity booklet for kids that included an audiobook version. Leading up to the commencement of her project, she worked with a local artist to organize an assisted paint night at the church to help fund her project needs.

Natalie developed a Vacation Bible School program for Lutheran Church of Our Father in Greensboro. She met with staff and youth directors for the church and discerned a need for a summer youth program to be put into place at the church. With the assistance of her team of church members, staff, and youth volunteers, Natalie planned and implemented a weeklong program for the youth of the church community. Her project helped lay the foundation for more post-Covid summer programs to continue.

Zoe planned, marketed and taught a free, introductory weekly class of ballet for after-school aged children through the local YMCA. She led a team of interested parents to advance the existing dance program within her high school by starting a Dance Booster group to support the dance teacher and students in that program. Zoe outlined her experience with instructions on how to recreate her project in a manual at the high school so students interested in volunteering in the same capacity would have lesson plans and access to tutorials she videotaped and uploaded to a YouTube channel.

Five of the six Scouts received Carolinas Peaks to Piedmont Trifecta award pins as well. They have earned all three of the highest awards available in Girl Scouting – Bronze, Silver and Gold.