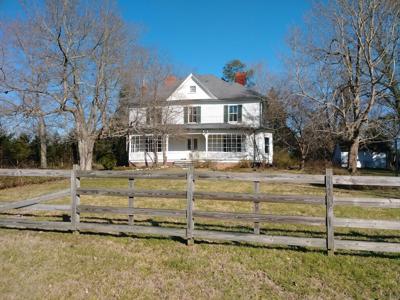 Development on the Johnson farm property is still probable as Diamondback Investment Group, doing business as Castleton Village LLC., has sold the nearly 467-acre property to D.R. Horton, a national company that bills itself as “America’s largest homebuilder.”

The property, along Guilford College and Mackay roads was in the news for the majority of 2020 and several months of this year as Diamondback announced several plans for development. Many local residents opposed the development, stating even the final revised plans presented in November 2020 consisting of 1,269 single-family and townhouses, along with 34 mixed-use buildings, was still too high in density.

Diamondback had announced plans for the property at two neighborhood meetings at GTCC Feb. 13, 2020, but immediately received pushback from the audience. One year later, on Feb. 16, 2021, the Jamestown Town Council denied both the rezoning and annexation requests.

The Jamestown Planning Board spent seven meetings in discussion from August to November last year before denying the rezoning request in November. The Board would not hear the annexation request as that is a duty of the Council.

Contrary to belief, Diamondback did not actually own the property until recently.

According to the Guilford County Information Service, Diamondback purchased the properties at 2207 and 2221 Guilford College Road and 5300 and 5303 Mackay Road from the Johnson family on June 30 for $14.5 million, then apparently turned around and sold to D.R. Horton the same day for a reported $18 million.

Diamondback once suggested ball fields could be located at the corner of Guilford College and Mackay Roads. The company would construct these fields, then turn them over to the Town of Jamestown upon completion. Later plans did not include ball fields.

Development by Diamondback was contingent upon the Town approving new Planned Use Development (PUD) zoning, which the Council agreed to in June of 2020, following the Planning Board’s November 2019 approval. However, Diamondback did state it would follow current single-family zoning districts if PUD had been denied.

“PUD is a zoning tool which is used to create flexibility for both the Town and a potential developer in order to help achieve a more acceptable development outcome,” said Jamestown Planning Director Matthew Johnson in 2020. It is to be used to accommodate commercial, residential and mixed-use development on large-scale sites of 10 acres or more. It gives the Planning Board and Town Council more control over types of development.

“You can create the product you want to see in Jamestown,” Johnson added. “This [amendment to the Land Development Ordinance] will give you the legal ability to hold [a developer’s] feet to the fire.”

Perhaps as a backup in case the initial plan was denied, Diamondback submitted plans to the Town for a single-family development in November 2020. To pursue those plans, however, they would have needed to wait 12 months before making a formal petition. According to the current Land Development Ordinance, “When an application for a zoning amendment has been approved or denied by the Jamestown Town Council, no rezoning application of the same property shall be accepted or considered within 12 months after the date of the approval or denial.”

This waiting period could be waived, however, by a three-fourths vote of the Council if it determines there have been substantial changes in conditions or circumstances. (LDO Section 5:3-6 A-B)

Horton has not announced plans for the property.

The property is currently in Jamestown’s Extra-Territorial Jurisdiction, or ETJ, meaning the town has control of the areas but they are not technically within the town limits. If annexation is approved, the addition would add about 0.5 square miles to the town’s size, which is currently 3 square miles. The town currently has about 4 square miles in the ETJ.

The town’s population, approximately 4,581, could potentially double in size once development occurs.