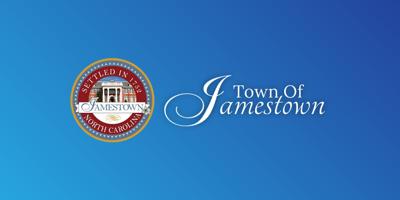 It was standing room only — with a few people sitting on the floor — at the Oct. 11 Special Town Council meeting. The unusually large crowd came to learn the status of the annexation and rezoning requests by D.R. Horton for the property along Guilford College and Mackay roads formerly owned by the Johnson family.

“We had all of our chairs out last night and I believe even added a row,” Town Manager Matthew Johnson said about the overcrowding. “Above all, we want to ensure safety of our attendees. We even had a representative from the Fire Marshal’s office to assist us in managing the attendance.

“There will occasionally be larger groups of attendees on nights with topics of great interest. This is one reason we have been working to expand our online capabilities.”

But perhaps the majority of the audience came to learn the status of the development agreement for the property between the Town of Jamestown and D.R. Horton. To say they were underwhelmed is an understatement.

Most of the meeting consisted of information that had already been presented regarding the development agreement. Annexation and rezoning are taking a back seat until the two attorneys, D.R. Horton and town representatives come to a consensus on the development agreement. If the Council ultimately rejects the agreement, annexation and rezoning become doubtful as Horton could pull out of the project.

The question of annexation first came before the Council Nov. 16 of last year. Earlier that month the Planning Board approved the rezoning from Agricultural (AG) to Planned Unit Development (PUD). A PUD is “an area of land under unified ownership or control to be developed and improved as a single entity under a unified development plan in accordance with and subject to the requirement of the [Envision Jamestown Comprehensive Plan],” which was adopted Oct. 19, 2021.

“Development agreements refer to the contracts that vest rights to develop a specific project for an extended period of time subject to the terms and conditions specified in the agreement,” Hawryluk said, quoting David Owens of the UNC School of Government. “They vest rights in the existing regulations applicable to a specific parcel to the mutual benefit of the landowner and the public.”

“[It] creates a common table where a town, town staff, citizens and the developer can sit and have very careful considered discussions of how land should be developed.”

Since this is a project that had strong public opposition and could ultimately double the population of Jamestown, the parties involved are not rushing through deliberations.

“I can tell you that Greensboro regrets that it gave you control of this property several years ago,” Terrell said of the fact the property is within Jamestown’s Extra-Territorial Jurisdiction.

“It is uncommon than any town anywhere has a tract of land this large and this central and an opportunity to decide what it’s going to be,” Terrell said on Aug. 18, 2021. “You cannot afford to get this wrong. It will change the character, the functionality of this town forever.”

“The result of those meetings was a letter of understanding, that made a very simple point: if D.R. Horton could make numerous compromises and numerous sacrifices to improve the quality of this development, the Town staff could recommend a low density of 3.2 units per acre,” Terrell said. “It is important to note that in urbanized areas, 3.2 acres is considered low density. High Point says 5 units per acre is low density.

“Density is always calculated on the gross land mass and not on the net developable area.”

Terrell noted that D.R. Horton is not a custom builder but a production builder. Design elements are identical throughout their projects so they can offer affordable products. Changes in designs cause problems for them.

“It’s hard for a company like D.R. Horton to negotiate a project like this,” Terrell added. “We experienced unexpected resistance from the company.

“But we are now working cooperatively. I am pleased to be able to say that. We don’t agree on everything but we are working seriously.”

The agreement will be for 40 years and “create a sustainable, higher quality community.”

Terrell said there is misunderstanding about the apartments having access to the Fox Hollow section of Adams Farm. That will not be public access but only for emergency services access. It will be gated and locked. The apartments consist of only 5 percent of the entire property and probably not visible from Guilford College Road.

Attorney Marc Isaacson, who represents D.R. Horton, agreed there were still items under discussion in the development agreement but progress has been made.

“It’s been a long process … and it’s complicated,” Isaacson said. “This is a complex piece of property.

“D.R. Horton plans to provide housing for those buying their first single-family home as well as what we might call ‘lock and leave’ town homes and some reasonably affordable multi-family homes for primarily younger or downsizing adults. Such a creative approach demands flexibility in the layout and will allow us to pay respects to the history of this property.”

Isaacson mentioned his team has been working with local consultants to develop ways to tell the history of the family and area in a proposed community center.

“We’re keenly aware of telling that story for decades to come,” he said

Isaacson pointed out PUDs are expected to deliver exceptional quality community designs that preserve critical environmental resources, provide high-quality community amenities, incorporate creative design in the layout of the buildings in circulation, ensure compatibility with surrounding land uses and neighborhood character and provide greater efficiency in the layout and provisions of roads, utilities and infrastructure.

Many of the existing trees will be preserved and untouched in the plan, along with many open spaces.

“The majority of the homes [will be] surrounded [by]and backing up to mature forest,” said Ryan Motes of D.R. Horton. “We’re at over 100 acres of open property.”

Motes added that final decisions on the commercial and amenities areas have not been finalized.

The town believes the development is critical. The AARP Livability Index shows Jamestown is below the national average in housing and in the bottom third of the country for housing affordability. The town is composed primarily of single-family homes, with only 25 percent being multi-family. Of all the housing in Jamestown, 1.6 percent are vacant.

“North Carolina and specifically our Triad area are experiencing a significant demand for new housing with many people relocating to this area,” Isaacson noted. “We meet that demand with reasonably affordable and quality housing. D.R. Horton is known for thinking outside the box when it comes to developing residential communities across the country.”

Once the final development agreement is approved by the Council and posted online, the public has 30 days to respond and another public hearing will be required.

Isaacson said that after the Council’s decision, the developer would submit plans to four separate governmental agencies (NCDOT, NC Dept. of Environmental Quality, the U.S. Army Corps of Engineers and Guilford County) for further approval.

“There are plenty of checks and balances on the development of this property in addition to [the Council’s] review and deliberation,” Isaacson said. “We want to get this right in the first place and not have to come back for repeated modifications and amendments.”

As expected, the majority of the comments from the public appeared to be against the development, citing the need for more trees, current overcrowding of schools, additional Town services, more traffic, eventually doubling the town’s population, density, additional crime, and the quality of D.R. Horton homes.

The Oct. 18 regular Town Council meeting agenda shows the annexation, rezoning and development public hearings, but the Council has continued the hearings until Nov. 15.

The Oct. 11 Special Town Council meeting may be viewed at www.youtube.com/c/TownofJamestownNC.